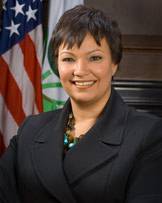 U.S. Environmental Protection Agency Administrator Lisa Jackson will speak on "Environmental Justice in the 21st Century, A Bipartisan Approach" in a lecture at 4:30 p.m. Friday, May 8, in Dodds Auditorium, Robertson Hall, on the Princeton University campus. Jackson, a 1986 alumna of Princeton's Graduate School, will explore the impact of the economic downturn on environmental priorities, the future of sustainability for urban youth and environmental justice.

The event, which is free and open to the public, is hosted by the University's Office of the Vice President for Campus Life and the Princeton-Blairstown Center, a University affiliate that provides programs for urban youth.

Jackson was nominated to lead the EPA by President Barack Obama on Dec. 15, 2008, and was confirmed by the Senate on Jan. 23, 2009. She is the first African American to serve in the position.

From 2006 to 2008, Jackson served as commissioner of New Jersey's Department of Environmental Protection (DEP). She worked to ensure that underserved communities received fair environmental protection under the law, which will be a topic during her talk.

No tickets are required for Jackson's talk. The doors to Dodds Auditorium will open at 4 p.m., and the event will be simulcast in 104 Computer Science Building for overflow attendants. The lecture also will be archived later for viewing on the University's WebMedia site.

Because of security considerations, attendees should be prepared to show a picture ID to gain entry to the event. No umbrellas, cameras or backpacks will be allowed into the venue. A reception in the Shultz Dining Room, Robertson Hall, will be held immediately after Jackson's talk until 7 p.m. for event attendees. The reception is not open to the news media.

Members of the news media who wish to attend the talk must RSVP no later than 5 p.m. Wednesday, May 6, by e-mailing earonson@princeton.edu.

In addition to the Office of the Vice President for Campus Life and Princeton-Blairstown Center, sponsors of the event include the Woodrow Wilson School of Public and International Affairs, Center for African American Studies, Office of Sustainability, Outdoor Action, Pace Center and Princeton Environmental Institute.

NJ Gov. Christie to speak May 20 at Princeton University