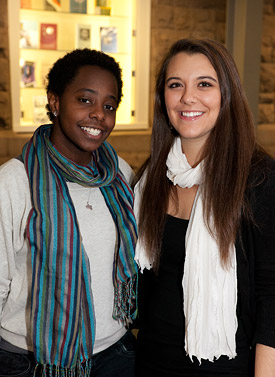 Princeton University seniors Brittany Cesarini and Sandra Mukasa have been awarded the Henry Richardson Labouisse '26 Prize, which was given jointly this year for the first time since it was instituted in 1984. The $25,000 prize will support the students in their endeavor to spend the next year establishing a community-based organization in Dar es Salaam, Tanzania, to target gender-based violence and HIV/AIDS.

The Labouisse Prize enables graduating seniors to engage in a project that exemplifies the life and works of Henry Richardson Labouisse, a 1926 Princeton alumnus who was a diplomat and international public servant who championed the causes of international justice and international development.

Cesarini, a major in the Woodrow Wilson School of Public and International Affairs, and Mukasa, a sociology major, plan to launch an organization named Shikamana (Kiswahili for solidarity) that will join the nascent coalition of organizations working to address gender inequality and public health in Tanzania.

Their plan for Shikamana is based on the SASA! (start, awareness, support and action) model of community-based activism and engagement created by the Uganda-based Raising Voices already in place in a number of East African communities. Cesarini and Mukasa will work with a team of 25 Tanzanians to connect with schools, religious groups and health clinics through peer discussions, community theater and public events. The focus is preventative intervention by using outreach to engage harmful community norms and shift them toward more gender-equitable, nonviolent alternatives.

In their proposal, Cesarini and Mukasa, both of whom have are pursuing certificates in African studies and gender and sexuality studies, wrote that research indicates a bilateral connection between gender-based violence and the spread of HIV/AIDS, which creates a vicious cycle that weakens families and communities. Rather than "isolate and blame male community members and casting females as mere victims," they wrote, "the model for Shikamana encourages all community members to see themselves as positive agents for change."

Mahiri Mwita, a lecturer in the Princeton Institute for International and Regional Studies (PIIRS) and director of the Kiswahili summer study abroad program Princeton in Dar es Salaam, consulted with the pair on their proposal and provided a recommendation for them to the Labouisse Prize committee.

"I have no doubt at all not only about the importance of their project, but also their ability to accomplish its objectives," Mwita said. "I have seen them successfully work as a team to coordinate and run projects both on campus and abroad. … I am also confident that their love for and commitment to work in Africa will have great and positive impact to many people who need such outreach."

Cesarini and Mukasa became friends through their study of Kiswahili at Princeton and study abroad trips to Africa. A discussion in fall 2011 about postgraduate options turned to the potential for a team-based, collaborative model to be effective in violence prevention.

"It was clear that the objectives of such a project would be best served by a partnership. From there, the decision to work together was pretty obvious," Mukasa said. "Our academic and extracurricular experiences, as well as our personal strengths, complement each other well. We share a deep commitment to public service, as well as a belief that constructive collaboration lies at the heart of social justice work. This is the kind of work we're interested in."

Cesarini and Mukasa met freshman year in Swahili 101 and participated in the Dar es Salaam program in summer 2009. Through coursework and community service, the semester they spent abroad at the University of Cape Town in South Africa in spring 2010 strengthened their understanding of some of the root causes of injustice and issues of development.

Cesarini, who is from Moscow, Pa., returned to Dar es Salaam in summer 2010 as a Grand Challenges Development intern to improve her Swahili and work in the nonprofit health care sector.

She worked in Tanzania, Kenya and Uganda in summer 2011 as an Adel Mahmoud Global Health Scholar to conduct research for her senior thesis, "'As for me and my house ...' Engaging Religion in Addressing Intimate Partner Violence Against Women in Tanzania."

On campus, Cesarini has been an active member of the Princeton Africa Development Initiative, Princeton Faith and Action, and Community House; served as an undergraduate representative on the Wilson School's Women and Gender Working Group; and held an internship at the Bobst Center for Peace and Justice.

"During my time in East Africa, I have heard many heartbreaking stories of marginalization and abuse and loss, but those stories have been outnumbered by inspiring testimonies of faith and hope and dedicated action in the face of seemingly impossible circumstances," Cesarini said. "The determination of Tanzanians to build stronger families and communities motivates me to keep partnering with them as they fight against the forces that oppress them. The Labouisse Prize will enable me to do that."

Mukasa, of Owings Mills, Md., whose family is from Uganda, had traveled there numerous times before coming to Princeton. Her first exposure to the connection between violence against women and HIV was during a summer in high school she spent as volunteer at the Braintree Primary School in Kyanja, Uganda, which had a significant population of AIDS orphans.

She spent summer 2010 as an intern at the New York City-based Astraea Lesbian Foundation, where she evaluated quantitative and qualitative data of grantee reports and compiled a database of grantee media resources.

Mukasa's extracurricular activities include being a moderator with Sustained Dialogue since her freshman year, a peer educator in the LGBT Peer Education Program and student co-chair of the LGBT Task Force since 2009, and in 2010 was a founding member of the Princeton Equality Project.

Damson Lwivah, acting executive director of WLAC, said, "We believe [Cesarini] and [Mukasa's] project embodies an understanding of Tanzania and a commitment to work alongside local people to implement change in a culturally sensitive way."

Aldin Mutembei, director of the Institute for Kiswahili Studies at the University of Dar es Salaam (UDSM) and a former PIIRS visiting lecturer, will serve as an adviser in Tanzania. Through UDSM, Cesarini and Mukasa will have access to libraries and event venues, and opportunities for interaction with other development researchers and community activists.

The women intend to stay on with the project following their fellowship year until they can turn over leadership to their Tanzanian team members. Both are considering graduate school in public health or a related field. Cesarini plans to continue to work on these issues in Tanzania, while Mukasa intends to do community-based work and organizing in either the United States or in East Africa.