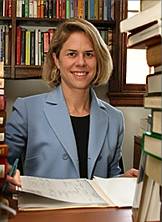 From biblical stories of Samson's muscular strength to the disciplined eating habits of Catholic monks -- Christianity has long espoused the benefits of a fit body.

For a growing number of people in evangelical denominations, that conviction has taken the form of dieting. In her new book, "Born Again Bodies: Flesh and Spirit in American Christianity" (University of California Press, 2004), Marie Griffith, Princeton associate professor of religion, examines this new trend of religion-based dieting.

Delving into the roots of this movement, she analyzes Christianity's role in the country's obsession with body, diet and fitness. She also provides an up-close look at some of the movement's current incarnations, including the Weigh Down Workshop led by Gwen Shamblin, whose Web site proclaims: "God is broken hearted over the fact that so many of His children have learned to run to the food instead of to Him for comfort, companionship and acceptance."

Griffith, whose research has focused on the role of women in Protestant Christianity and in the evangelical denominations, teaches "Women and American Religion," "Religion in American History" and "Religion and the Body."

She obtained her master's and Ph.D. degrees in religion at Harvard and studied political and social thought as an undergraduate at the University of Virginia. Griffith, who has taught at Princeton since 1998, also taught at Harvard Divinity School and Princeton Theological Seminary.

Griffith spoke to the Princeton Weekly Bulletin about her book, "Born Again Bodies" and the Christian dieting movement.

How did body image and beauty become an expression of spirituality and faith in the Christian evangelical movement?

The evangelicals certainly did not invent this. There is a long and fascinating history to this, dating back to the Puritans and before that, which I try to cover in the book. The body has long been thought to represent the true self within. Evangelicals today often refer to Paul's quote in 1 Corinthians about the body being a temple of the Holy Spirit. In the evangelical culture, there are certain codes about conversion and how a glow will emerge. So if you glow, you will display this sense of blessedness that others will want. It became another method for witnessing, for saying: "I have Jesus."

How is that movement different from fad dieting and body size trends in popular culture?

[Christian dieters] are very aware of that whole culture. They do want to distinguish their message from Vogue or Seventeen magazines. They would say: "We are not about looking good. We are about glorifying God. We're about obedience." However, I don't think that's entirely true. There are some differences. They dress more modestly, and it's not sexualized in the same way. But to start with, the appeal is the cultural standards of beauty. What concerned me about this movement is that it is focused on a narrow range of beauty ideals. There is so much pressure on girls to look a certain way, to act a certain way or else they don't fit this model of the ideal Christian woman.

What methods or approaches do these diet programs use to motivate their followers?

There is a lot of scripture reference to discipline and obedience as main themes in these approaches. Some of these programs ask their followers, "How can we be a temple of the Holy Spirit and be mistreating our bodies?" What I see happening is that body sizes are very closely linked with other ways of dividing the world into the sinners and the righteous. In some of these programs, people can be made to feel bad or almost evil for being overweight, because they are not following a conformist image of what it means to be a good Christian.

Why did your book devote attention to Gwen Shamblin and her program?

Gwen Shamblin is like a celebrity and such a trusted authority. Shamblin is an extreme. In Shamblin's world, people who don't lose weight often feel like failures. If they don't lose weight, it's a failure of discipline; it's a failure of obedience. I heard those stories over again from the people I talked to while I was doing my research. There are other groups that are less harsh. Still, it troubles me that someone hands over their mind to an authoritarian leader.

Many of these programs have been developed by laypeople like Shamblin. What do the clergy and church leaders have to say about these people and their programs?

I don't find many Christian leaders addressing it. And if they are, they are addressing it superficially. What they say is that "if people want to lose weight, let us give them a Christian way to do it. This method is going to bring them closer to the Lord. What (the diet gurus) are doing is good work."

Are there other Christian or religious groups that have embraced spiritual dieting?

Countless religious groups emphasize dietary restrictions in everyday life, such as kosher laws, or during special occasions, such as fasting during Ramadan. These practices hold a variety of meanings, and religious leaders talk about them in different ways. So yes, spiritual dieting is common, but the form it's taking in contemporary evangelical life is pretty specific to that subculture.

Breidenthal: Reflection should be part of college life