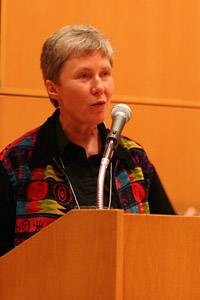 Maria Klawe, dean of Princeton's School of Engineering and Applied Science, told participants in Wednesday's event that ensuring vigorous interactions with business and industry is a key element of the engineering school's recently announced strategic plan.

Entrepreneurs, from beginners to veterans, gathered on the Princeton campus Feb. 2 to network and trade stories in an event intended to promote entrepreneurship and forge closer ties between the local business community and the University.

For two hours Wednesday evening, Princeton's Friend Center for Engineering Education was buzzing with conversations as University students and faculty mixed with budding entrepreneurs and experienced business leaders from New Jersey. The event, called "Meet the Entrepreneurs" was sponsored by the School of Engineering and Applied Science and the Princeton Institute for the Science and Technology of Materials (PRISM).

"We want to be a hub -- nationally, but especially in the local area -- for people who are interested in technology and its impact on society to come together and learn from each other," said Maria Klawe, Princeton's dean of engineering.

"Princeton is lending its leadership to create an environment where entrepreneurs can come and get the advice they need to get their businesses off the ground," said Joseph Montemarano, director for industrial liaison at PRISM and an organizer of the event. "This sort of networking is common in Silicon Valley, and we would like it to be a fixture in New Jersey as well."

The event featured 14 successful entrepreneurs, from the creator of software for testing and troubleshooting integrated circuits to the founder of a company that delivers individualized lesson plans for K-12 education via the Internet. Several of the entrepreneurs had developed technology invented at Princeton.

Klawe said that ensuring vigorous interactions with business and industry is a key element of the engineering school's recently announced strategic plan, and that the school is committed to holding more such events. "We want to help people develop the skills and knowledge they need to take technology and innovation and transfer them into something of commercial and social value," Klawe said.

After an informal gathering over hors d'oeuvres, the more than 100 participants sat at tables while the successful entrepreneurs rotated between the groups and fielded questions. At one table, the founder of a local start-up company and several Princeton students fired questions at entrepreneur Ken Kay, who sold his successful software company to Microsoft and is chair of Jumpstart New Jersey Angel Network, a group of investors who fund early-stage companies.

Kay advised the young entrepreneurs to focus on building long-term relationships with potential investors and partners rather than relying on make-or-break business plan presentations. "In the end, it's about people getting comfortable with each other," Kay said.

Phil Southard of Plainsboro, who founded a company called AgriData Systems, said the evening was far more productive than he imagined was possible. "The one-on-one time is terrific," he said "It's great that the University cares about the entrepreneurial community because entrepreneurs sometimes feel like the little guy, and it's nice to have the support."

Several undergraduate and graduate students said they were taking their first steps toward entrepreneurship. "I'm one of those people who always wanted to start my own business, said Peter Kwan, a graduate student in electrical engineering. "For me and many students, it's a mysterious process. How do you go from the bench in the back of a lab and move forward and lead a successful business? An event like this will help me figure out how to do that."

Darren Hammell, a 2001 Princeton graduate who helped found the company Princeton Power during his senior year, agreed that starting a business can be scary for students. "Now, looking back, it's not that it wasn't very hard work, but it's probably not harder than many things undergraduates do," he said. "I would like to convey to people that it is very possible."