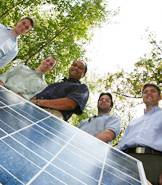 Professor of Electrical Engineering Sanjeev Kulkarni (center) and Assistant Professor of Mechanical and Aerospace Engineering Clancy Rowley (far left) are collaborating on a solar energy project with Princeton Power Systems founders (from left) Erik Limpaecher, Mark Holveck and Darren Hammell. In the foreground is a solar panel similar to those that will be installed on the Engineering Quadrangle roof.

Solar panels that are slated to be installed this fall on the roof of Princeton's Engineering Quadrangle will shave only about $60 off the University's monthly electricity bill. But the technology that emerges from this unique industry-academia research collaboration may eventually save New Jersey households millions of dollars in energy costs.

Princeton Power Systems, a company started in 2001 by three freshly minted Princeton engineering graduates, has received a grant of $529,626 from the New Jersey Commission on Science and Technology for a collaboration with the School of Engineering and Applied Science.

"Most people think of solar panels as being passive," said Darren Hammell, who is chief executive officer of Princeton Power, which he cofounded with Erik Limpaecher and Mark Holveck, all members of the class of 2001. "But we can actively control them to optimize their efficiency in response to changing environmental conditions."

The company produces a device called a "grid-tied inverter," which allows raw electricity produced by a group of solar panels to flow easily into the main power grid. It translates the direct current (DC) produced by the solar panels into alternating current (AC) -- the form of electricity that is the lingua franca of public utility grids -- more efficiently than anything currently available.

Princeton Power already produces commercial-scale inverters. One purpose of the research project with the School of Engineering is to scale the inverter to a smaller size so that it can work optimally for a three-bedroom house in, say, New Brunswick.

Hammell noted that most studies of solar power have been done in sun-saturated states like California and Arizona. "New Jersey is in many ways ideal for solar power because of a good state rebate program and high energy prices," he said. "But no one has really studied how solar power can be optimized in New Jersey."

For one thing, of course, New Jersey has a lot of clouds. This means that in order to maximize the power harvested from the panels, the inverter needs to tweak both the voltage (the capacity to produce electricity) and the current (the flow of the electricity) so that both run optimally in an on-the-fly response to changing sun intensity.

Professor of Electrical Engineering Sanjeev Kulkarni is one of the faculty members helping Princeton Power develop robust algorithms that will convert DC power to AC power as efficiently as possible.

Kulkarni is no stranger to industry collaborations. He has worked with Siemens, IBM, Intel and other big corporations on thorny problems in image/video processing, statistical pattern recognition and machine learning. But this is the first time he has worked with a young company like Princeton Power.

"I'm mostly a theoretician, but having a concrete application in mind often drives some of the best questions in theory," said Kulkarni, whose interests extend from signal processing to philosophy (he teaches an undergraduate course and has cowritten a forthcoming book with Professor of Philosophy Gilbert Harman).

Kulkarni, who also is master of Butler College, said that he and Clancy Rowley, assistant professor of mechanical and aerospace engineering, are hoping to inspire a team of undergraduates to focus their senior theses on the solar power project.

"It's exciting to have this real experimental rig to test out work that is often done through computer simulations," said Rowley, who specializes in control theory.

Joseph Montemarano, industrial liaison for the Princeton Institute for the Science and Technology of Materials, also is consulting on the project.

For the past two years, the University has been using another of Princeton Power's products -- a beta version of a high-efficiency variable speed fan controller -- on the cooling tower of the cogeneration plant on Elm Road. It is one of 12 fans that chill water for 87 campus buildings.

The company is one of a growing number of startups to emerge from electrical engineering professor Ed Zschau's highly popular course, "High-Tech Entrepreneurship."

Princeton Power is headquartered in office space on the Forrestal Campus, but the young engineers consider a couple of downtown Princeton coffee shops their auxiliary offices of sorts. They had their first meeting with entrepreneur and private space traveler Greg Olsen, who has invested in the company, at Starbucks. And they often confer with Kulkarni at Small World.

The solar panels on the Engineering Quadrangle will produce three kilowatts of electricity, which is about what the average house in New Jersey consumes.

Princeton Power believes that its inverters, which have been tested in computer simulations but not yet in real-life New Jersey weather conditions, may represent a 75 percent efficiency improvement over other inverters currently available.

Senior ready to launch career and a company