A solar installation at the high-tech storage library on the Forrestal Campus is launching the University into a new area of energy sustainability.

Princeton and Columbia universities and the New York Public Library are serving as "hosts" for a new solar system set up on the roof of the building that houses the Research Collections and Preservation Consortium (ReCAP). The facility stores books, journals and other materials from the three institutions.

In November, crews began installing more than 5,000 photovoltaic panels covering 53,000 square feet of the roof. Wires from the panels lead to equipment in the building that converts the solar energy to AC energy. When the project is completed in early February, the arrays will have the capacity to produce 370 kilowatts of power in optimal operating conditions (full unimpeded sun).

This is the first large solar system installed on a building on Princeton's campus. The building will use more power than the solar system can provide, so it will still need to import power from the grid, according to Tom Nyquist, Princeton's director of facilities engineering. However, there may be periods when the heating, ventilating and air conditioning equipment is cycled off that the solar arrays could actually load power back onto the grid. The ReCAP facility is not connected to Princeton's energy-efficient co-generation plant. 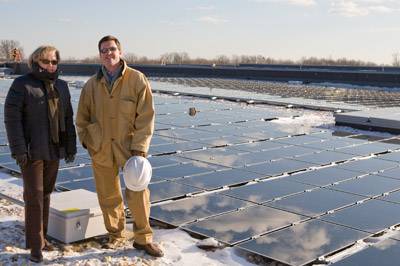 Checking out the solar arrays on the roof of ReCAP are Eileen Henthorne, the consortium's executive director, and Michael McLane, associate partner at Aegis Property Group, which manages construction for the consortium. (Photo: Brian Wilson)

The project was made possible through New Jersey's Solar Renewable Energy Certificate (SREC) program. The investor in the project is Pennsylvania Power & Light, an electricity supplier in New Jersey that funded the installation of the solar panels. Each time a solar electric system generates 1,000 kwh of electricity, an SREC is issued, which Pennsylvania Power & Light can then sell or trade separately from the power itself. The price depends on the market.

The SRECs are a way to help suppliers cover the additional cost of investing in green energy versus conventional energy. The state of New Jersey requires electricity suppliers to provide a percentage of their electricity sales from solar generation. Suppliers must use the SREC program to show compliance with this part of the state's renewable portfolio standard.

"There is no greenhouse gas associated with solar power, but there has been no financial reward for it either," Nyquist said. "This is a way to attach a reward to the investment."

While the income from the power alone is not enough to make the project financially viable, the investment tax credit that Pennsylvania Power & Light receives and the sale of the SRECs makes it profitable.

"Suppliers can't compete just on pure power, so the environmental benefits are being monetized for the value," Nyquist said.

He said this alternative is important because it stimulates suppliers to look into new forms of energy.

"We're in a carbon dioxide constrained world," Nyquist said. "We have to find other ways to produce power beyond burning fossil fuels. The other ways will be very expensive initially and maybe even in the long term. This SREC process is a way to start getting the green power industry launched in New Jersey."