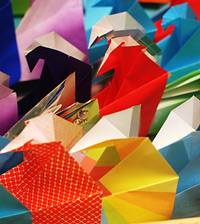 The colorful origami waves are intended to memorialize victims of the recent Indian Ocean tsunami.

Several campus groups have organized an effort based on the Japanese art of origami to raise funds for areas affected by the recent Indian Ocean tsunami.

The folding of paper cranes is known as an international symbol of peace and compassion. This new effort, "Making Waves," involves folding origami waves to memorialize victims of the tragedy.

Members of the campus and local communities are working together to fold 150,000 waves, each for a suggested donation of $1. The goal is to raise $150,000 to go to CARE USA for rebuilding communities in the affected regions.

Several folding events are planned on campus and in local communities through April 23. During the week of Feb. 21, origami instructors are staffing tables at the Frist Campus Center between noon and 5 p.m. Monday through Friday and all day Saturday. In addition, an exhibit of information about the "Making Waves" project, along with animal origami from around the world, is on display on the main floor of the center.

Campus activities are being organized by student leaders from the Global Issues Forum, Princeton Tsunami Relief, Community House, Student Volunteers Council and Cotsen Children's Library Outreach Volunteers. More information about the initiative, including a calendar of events, is available online.