Myhrvold reflects on 'Magic of Invention' 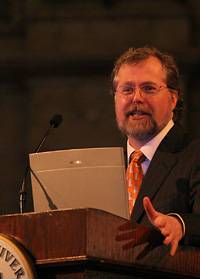 Success in inventing new technologies and products is the nation's greatest hope for prospering in the 21st century, but also is an under-supported endeavor, technology industry pioneer Nathan Myhrvold told a Princeton audience Saturday, Feb. 26.

"Ironically, the world does not focus much effort on [invention]," said Myhrvold, a former chief technology officer at Microsoft Corp. and founder of Intellectual Ventures, a firm that nurtures invention. "In fact, invention is a sideline or a hobby for virtually everyone who practices it."

Much of society is focused on steps that come after invention, such as venture capitalists who fund fledgling businesses, but not on the initial spark itself, said Myhrvold, who received this year's James Madison Medal, the University's highest honor for a Graduate School alumnus, at the annual Alumni Day program.

"I like to think that if you really focus on invention, we could have a whole lot more and a whole lot better," Myhrvold said in an address titled "The Magic of Invention."

Myhrvold cited examples of important inventions, from aviation to Velcro, and said that many were the result of a conscious effort to create something new. The Wright brothers, he said, devoted four years to solving the problem of flight in a systematic way. "This kind of dedicated approach to invention, I think, is something the world needs to support a whole lot more," he said.

Even inventions that appear to happen by serendipity require the inventor to recognize value in something unexpected, Myhrvold said. Rather than true moments of serendipity, inventions of products such as Teflon and penicillin were "accidents waiting to happen" because the inventors were approaching their work with an open mind.

Myhrvold's own entry into the field of invention and entrepreneurship came after starting a career in mathematical physics and cosmology. In 1983 at age 23, Myhrvold earned a Ph.D. from Princeton in applied mathematics. He then studied with physicist Stephen Hawking at Cambridge University before starting a computer company called Dynamical Systems, which was bought by Microsoft in 1986. At Microsoft, Myhrvold founded Microsoft Research, which supports early-stage scientific research.

Myhrvold also has found success as a writer, chef and photographer, said Graduate School Dean William Russel in introducing Myhrvold. The Madison Medal citation, Russel said, describes Myhrvold as "physicist, champion of research and invention and renaissance man" and adds that "society is richer for the generosity with which he shares his vision."

Myhrvold called for greater attention in education, business and government to the support of creativity and invention. "One great impediment, which I know Princeton is very involved in addressing, is getting great kids to major in science and engineering," he said, emphasizing the need for a diversity of people, backgrounds and viewpoints.

The stakes for achieving a better understanding and support of invention are high for the United States, Myhrvold said. "America is getting out of the business of building stuff," he said, citing the dramatic shift during the last century away from agricultural and manufacturing jobs. "If we don't foster invention, it's not clear what we are going to do for a living."

"Economies of the 21st century will be driven by the magic of invention," Myhrvold concluded.