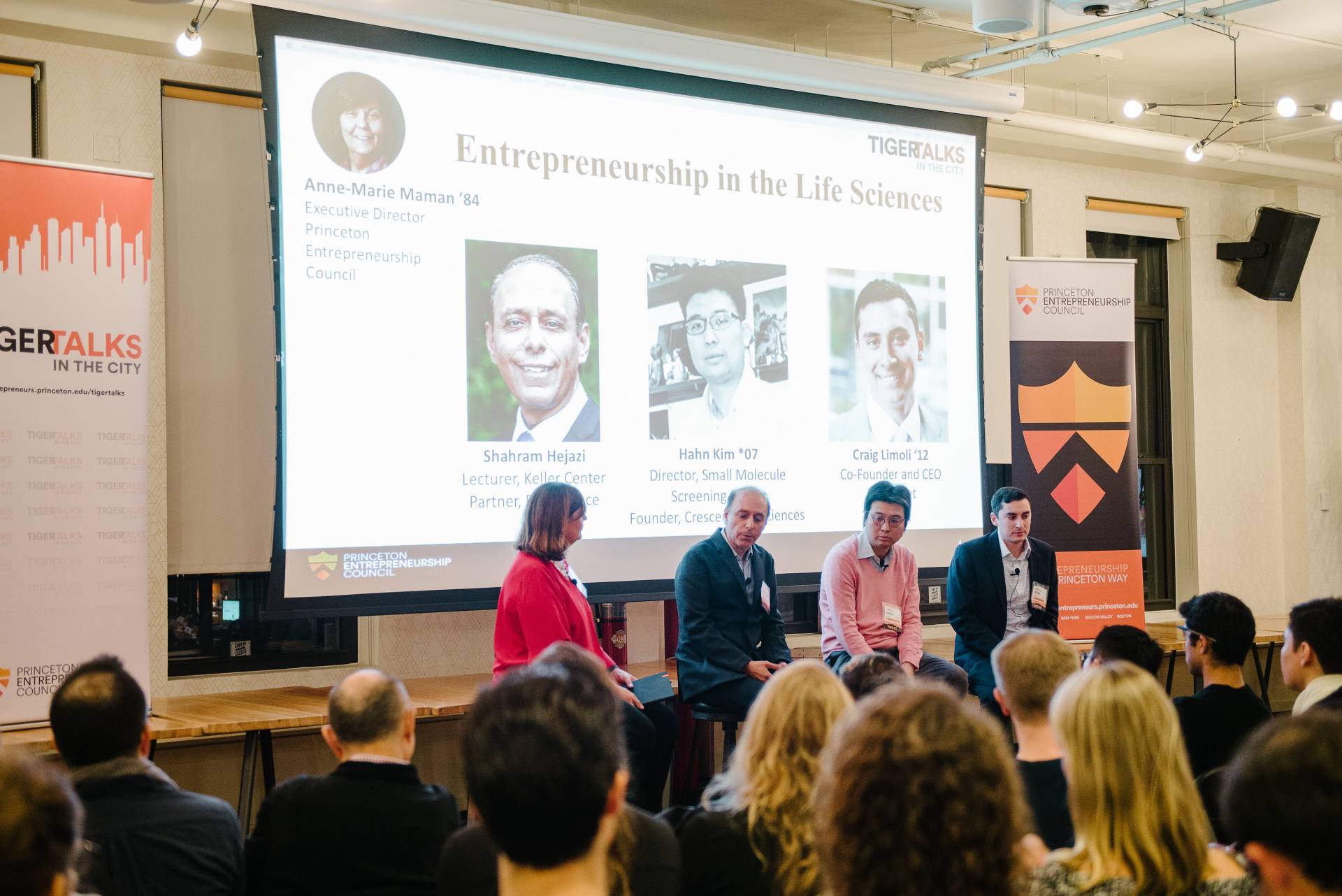 From left: Anne-Marie Maman moderates the TigerTalks in the City on Nov. 30 with panelists Shahram Hejazi, Hahn Kim and Craig Limoli. The event's focus was entrepreneurship in the life sciences.

Over 100 Princeton alumni, students and friends filled the seats at WeWork Chelsea in New York City on Nov. 30 for a conversation about entrepreneurship in the life sciences.

Organized by the Princeton Entrepreneurship Council, TigerTalks in the City is a series designed to bring Princeton research to New York. Panelists included Shahram Hejazi, a lecturer and entrepreneurship specialist in electrical engineering and the Keller Center for Innovation in Engineering Education, who is also a partner at BioAdvance; Hahn Kim, who earned a Ph.D. in chemistry from Princeton in 2007 and is director of Princeton’s Small Molecule Screening Center and the founder of Crescenta Biosciences; and Craig Limoli, Limoli, Class of 2012 and co-founder and CEO of WellSheet. Anne-Marie Maman, executive director of the Princeton Entrepreneurship Council and a member of the Class of 1984, moderated the discussion.

What are the unique challenges that data science adds to life science? Benefits? Drawbacks?

“We’re seeing for the first time a convergence of data science and life sciences,” said Hejazi, who noted that "the data science is finally to a point where it enables us to utilize it to help physicians and the whole health care world.”

For Kim, the challenge is making connections within the large amounts of data, especially in the early stages of research. As regulators “now require more biomarkers as evidence of the efficacy of your drugs, I think aligning those and making a vertical integration from early stages to the patient level … will be one of the keys going forward,” he said.

How do you stay current? Are things getting faster?

Drug discovery speed depends on the pace of the FDA approval process, Kim said, but as researchers get better at interpreting data, the rate of mistakes will drop, leading to feedback loops that will accelerate the process.

Applying these technologies in meaningful ways will address some of the current “pain points,” said Limoli. “Understanding [customers’] needs deeply — and how that can be met by these new enabling technologies — is the key to really prioritizing where to focus.”

Investors are always looking five years down the road, Hejazi said. “We see ourselves in some ways as futurists. The way we do that, frankly, is the way anyone else does. You look at some of the major megatrends in science, technology, government. … You really have to look ahead, you can’t look at what’s happening today.” 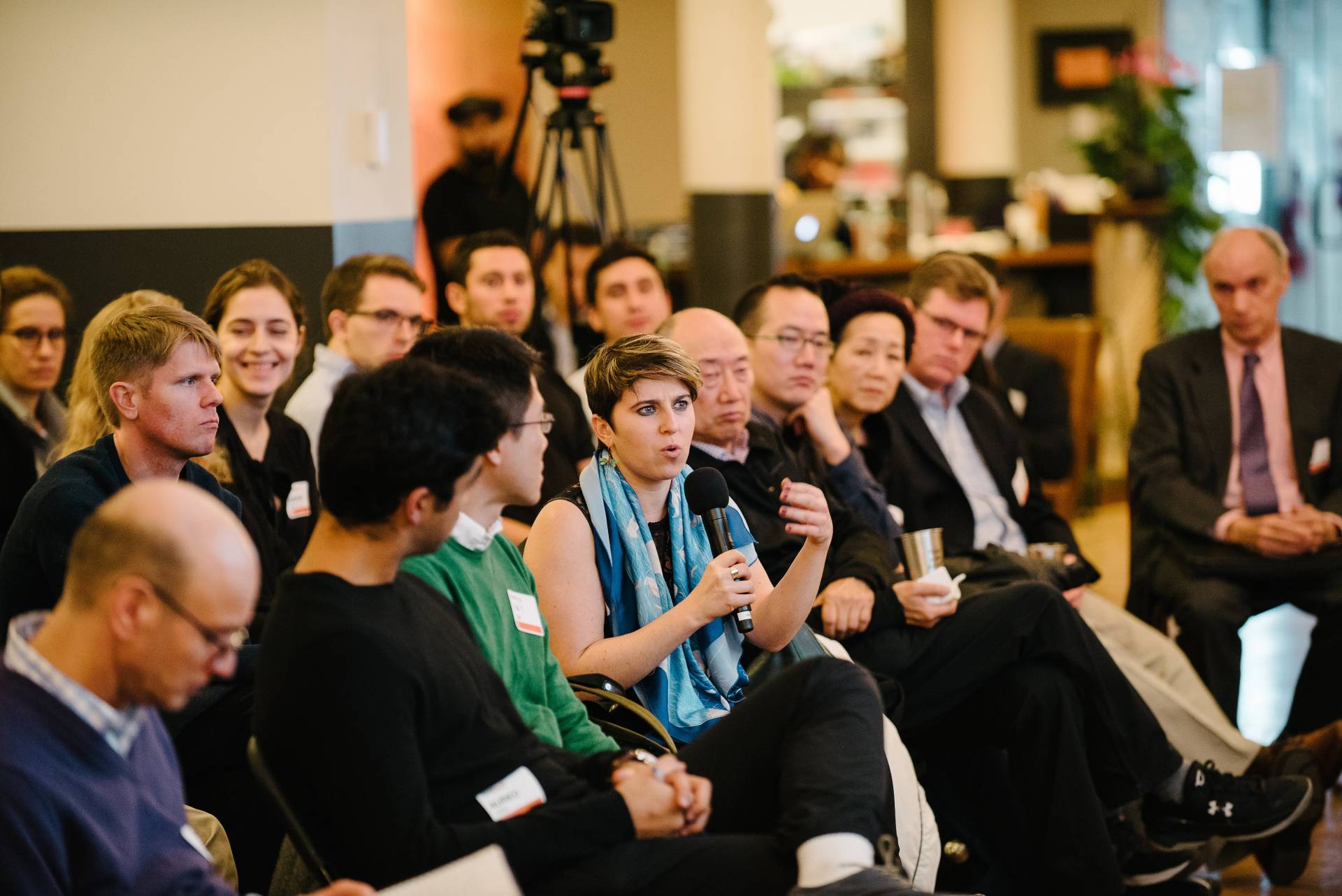 More than 100 Princeton alumni, students and friends filled the seats at WeWork Chelsea to participate in the conversation.

With the large amounts of data available, targeted therapeutics and personalized medicine are becoming more widespread than the traditional “one-size-fits-all” drug approach, Hejazi said. “It’s really becoming a reality.” Regulatory agencies are starting to keep pace, he added, “They’re realizing they need to catch up.”

“The innovation in that area has been really exciting,” said Limoli, as precision medicine becomes a standard part of physician workflow and treatment decisions.

“We’re coming to a convergence,” said Kim, citing an example in his work where he uses large datasets to target a protein in mice in real time.

Highlights from the Q&A session:

Have electronic medical records accelerated health care innovation or been an impediment?

“In many ways they’ve been an impediment,” said Limoli. “However, from a data perspective, I actually think it’s been tremendous. If you think about it, just 10 years ago, it was 10 percent of doctors that were using electronic medical records. And the adoption has spiked to 95 or so percent. That data … is not well standardized, it’s not easily digestible, but it’s there. And there’s been an explosion in digital health funding, which I think is largely related to that factor. There’s so much that Silicon Valley software companies can do now that would have been completely unfeasible previously.”

What valuation metrics are relevant for investors and entrepreneurs?

“It’s much better today to be an entrepreneur than an investor,” said Hejazi. “I think valuations are extremely high, and that’s because of the inflow of a significant amount of capital that’s being poured into the life sciences, especially in digital health, by tech investors from both coasts. Any type of traditional valuation method — those are out the door. ... The valuations we see today are double to triple than we saw two years ago.”

He continued: “There’s an overflow — an oversupply — of capital. You see seed capital firms popping up all over the country. We look for deals that are reasonable and have promising technology.”

Limoli added that with early-stage seed investments "it’s really difficult to quantify the likelihood of success of a business model. But I think it’s really important to show tangible market validation, that there is an opportunity here that people are really willing to pay for."