This month, the Princeton Entrepreneurship Council (PEC) launched "TigerTalks in the City," a quarterly series designed to bring Princeton research with an entrepreneurship focus to New York. The topic of the inaugural panel discussion was "Big Data and Little Privacy?" and featured faculty from a range of disciplines.

Brian O'Kelley of the Class of 1999, founder of AppNexus, kicked off the evening on Oct. 6 at the company's headquarters in Midtown. "For 17 years, I've been waiting for Princeton to come to New York City and to make entrepreneurship a real focus," he said. "Somehow, all of these things are coming together."

And coming together they are. Mung Chiang, PEC chair and director of the Keller Center for Innovation in Engineering Education, said that among the initiatives Princeton is spearheading to support entrepreneurship are the new "incubator in downtown Princeton" and the undergraduate certificate Program in Entrepreneurship. 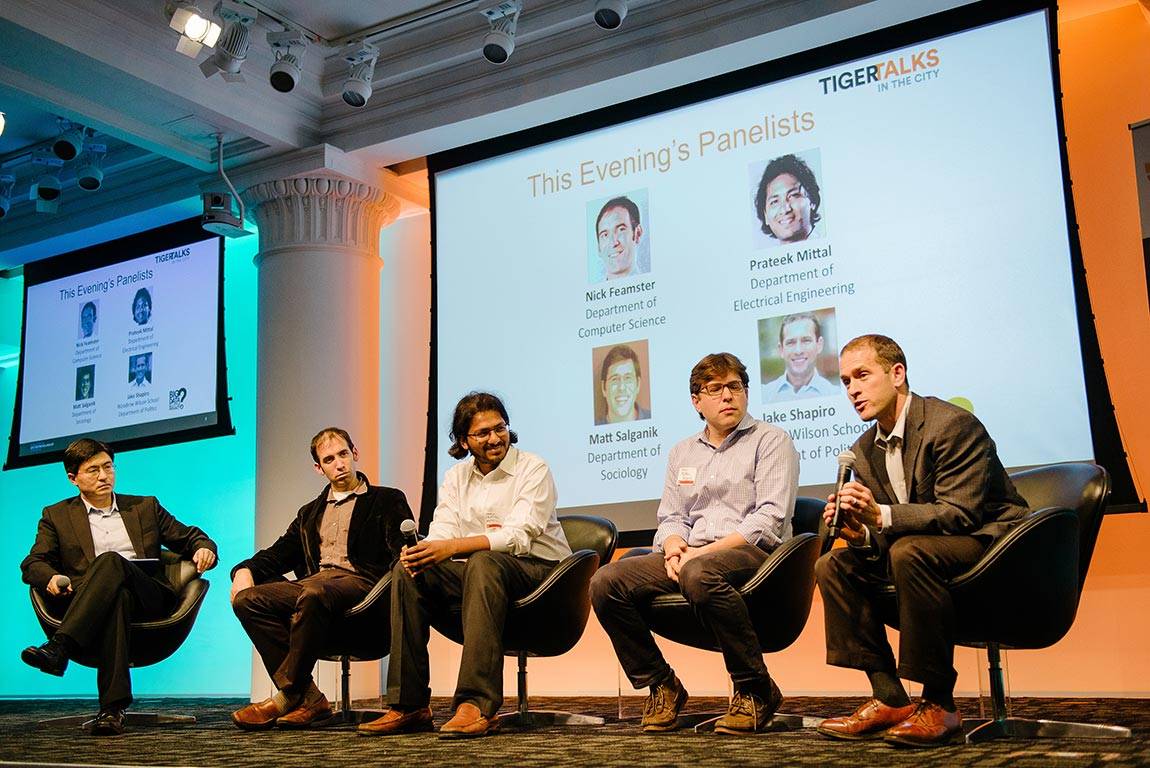 "Big Data and Little Privacy?" was the topic of the inaugural TigerTalks in the City in New York in early October. The quarterly series, launched by the Princeton Entrepreneurship Council (PEC), is designed to bring Princeton research with an entrepreneurial focus to the city. Above from left: Mung Chiang, chair of PEC and the Arthur LeGrand Doty Professor of Electrical Engineering; and panelists Nick Feamster, professor of computer science; Prateek Mittal, assistant professor of electrical engineering; Matt Salganik, professor of sociology; and Jacob Shapiro, professor of politics and international affairs. (Photo by Sandy SooHoo for the Princeton Entrepreneurship Council)

Pablo Debenedetti, dean for research, spoke about the entrepreneurial advances on campus that government and University-funded research grants support. "We've created Innovation Funds, which reward bold ideas to establish a culture of risk-taking," said Debenedetti, who is also the Class of 1950 Professor in Engineering and Applied Science and professor of chemical and biological engineering. "Our aim is to support research in which knowledge is advanced by invention."

Chiang, who is also the Arthur LeGrand Doty Professor of Electrical Engineering, noted that the University is executing a New York City strategy of "Princeton presence without a physical presence," with a suite of complementary programs that bring Princetonians to New York, including eLab Demo Days, the Princeton Startup Immersion Program (PSIP), Princeternship and OfficeHours.

Chiang, the moderator, asked the panelists what they viewed as the best-use case of big data. From tracking the spread of Ebola using cellphone records to understanding risk behaviors in populations at risk for HIV, the benefits of big data are apparent, he said. Prateek Mittal, assistant professor of electrical engineering, mentioned Google's recent advances in collecting and anonymizing data from the homepages of Google Chrome users, a method called differential privacy. The concern, as all of the panelists pointed out, is when this data falls into the wrong hands.

Jacob Shapiro, a professor of politics and international affairs at the Woodrow Wilson School,  drew an important distinction about the conceptualization of the entities that use big data. "It's intuitive for us to think of government as by and large existing to serve the community," he said. "In many developing countries, however, the government exists to take from the community and transfer resources into the pockets of government officials and friends."

Shapiro went on to illustrate how data obtained from cellphone records about the wealth of communities could help or harm a population. "Using big data, benign governments could more effectively target aid, assistance and training programs; for a malign government, the data could be a way to target and stop cars to extract large bribes."

Mittal added that in some political regimes, the very use of privacy technology can put citizens in harm's way. "Even though a network provides privacy with respect to action, it may not hide the illegal use of technology in the first place."

Nick Feamster, a professor of computer science and acting director of the Center for Information Technology Policy, illustrated the complexity of this problem. "It is difficult to reason about the risks versus the benefits of big data, because we often don't know what the risks are or what the benefits could be."

Where does the United States government fall on the big data-beneficence spectrum? Shapiro reassured the audience that in his interactions with government officials, he has found that they care deeply about developing systems that protect user privacy, even if it means sacrificing system performance.

Another threat to user privacy is the ubiquity of IoT (Internet of Things) devices, such as smartwatches and cable boxes. Feamster observed that the majority of these devices are not encrypting traffic, which means they are not abiding by security and privacy best practices. And while computer scientists are working on technical solutions, not all of these solutions will realistically be implemented. "The average home user doesn't want to configure a firewall," Feamster said. "They just want everything to work."

So how do we harness the power of big data while regulating its uses and protecting user privacy? The panelists offered different approaches to resolving this complex issue. Matthew Salganik, a professor of sociology observed, "Because technology is changing so rapidly, rule-based systems will lag behind the technology, so we need to take more of a principle-based approach." He offered four guiding principles to abide by in research ethics: respect for individuals, beneficence, justice, and respect for law and public interest.

While agreeing with the sentiment of Salganik's four principles, Shapiro was pessimistic about how corporations with ill intent might get around the law. Mittal answered: "We've been living with technology where privacy is a second-class citizen. We need to move toward an era where we see increasing adoption of privacy technology."

The diverse perspectives of the panel indicated a critical component of finding a solution to the big data and user privacy problem. "A very important part of identifying a solution is breadth of expertise," Salganik noted. “[Questions about big data] are not going to be solved by a computer scientist or lawyers or police or experts alone; it needs everyone at the table."

The next TigerTalks in the City — on the subject "Smart Cities" — will be at the Princeton Club of New York on Dec. 1.