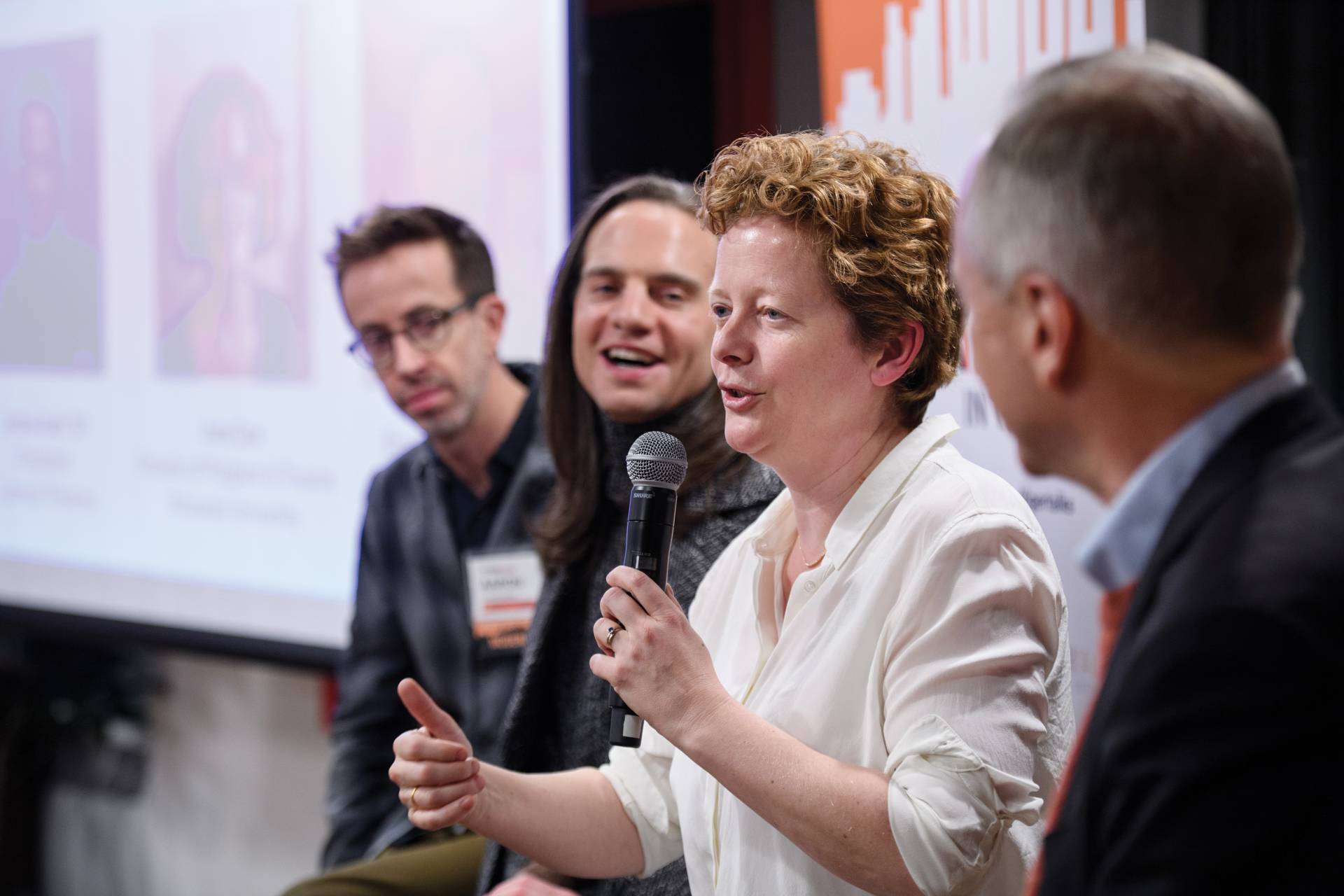 Last month, the Princeton Entrepreneurship Council (PEC) held its season premiere TigerTalks in the City, featuring Princeton faculty members and alumni discussing the behind-the-scenes connection between entrepreneurship and the arts. From left: Aaron Landsman, lecturer in theater and the Lewis Center for the Arts; Jordan Roth, a 1997 alumnus and president of Jujamcyn Theaters; Jane Cox, senior lecturer and director of the Program in Theater; and 1980 alumnus Douglas McGrath, a filmmaker and playwright.

At the season premiere of TigerTalks in the City — the Princeton Entrepreneurship Council’s signature panel discussion and networking series — faculty and alumni discussed the behind-the-scenes connection between entrepreneurship and the arts.

"TigerTalks in the City: Arts Entrepreneurship: Producing Live Performance" was held Oct. 25 at WeWork Grand Central in New York. The event featured Jane Cox, senior lecturer and director of the Program in Theater in the Lewis Center for the Arts; Aaron Landsman, lecturer in theater and the Lewis Center for the Arts; 1980 alumnus Douglas McGrath, a filmmaker and playwright; and Jordan Roth, a 1997 alumnus and president of Jujamcyn Theaters, which has produced such Broadway hits as "The Book of Mormon," "Kinky Boots" and "Springsteen on Broadway."

“Most of us as artists, if not all of us, have some kind of entrepreneurial bone in our bodies, especially if we want to have the kind of prolonged careers that all of us [on the panel] have enjoyed,” said Landsman, who served as moderator. 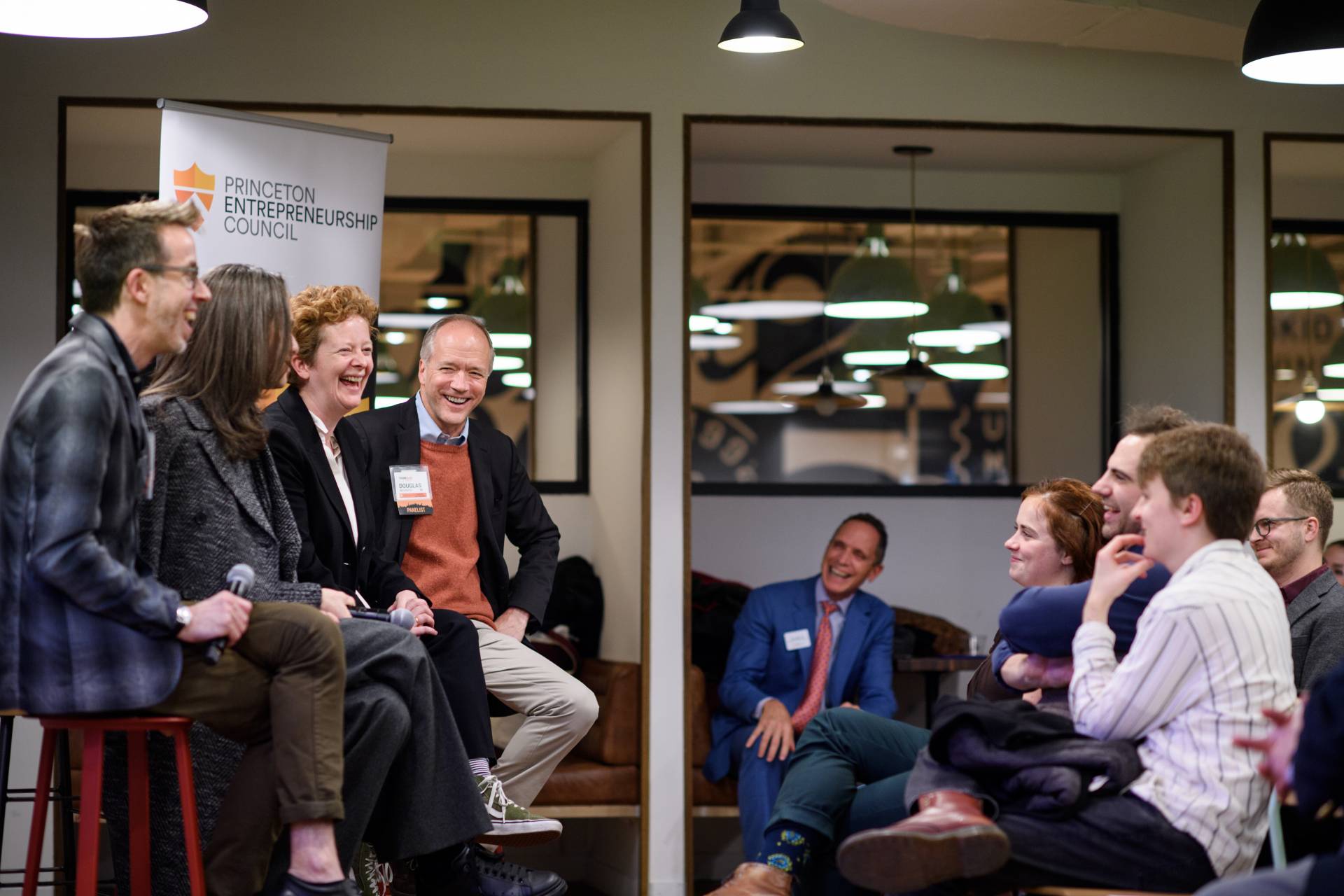 The panelists respond to questions from the audience on topics ranging from the journey of an idea to the role of leadership.

The panelists turned the spotlight on common themes in entrepreneurship and how they manifest themselves in the arts. For example, the spark of creation is necessary — without it, there would be no ideas being turned into products, companies or works of art.

Much like a tech startup, a theater production often starts with the seed of an idea and only becomes a reality through self-motivation and a lot of work, McGrath said. “I went from a blank page to a banner in front of a theater with the name of [my] play on it and you think, ‘well, all these people are inside this theater because one day a long time ago, I thought maybe this would be a good idea.’”

Another theme was the value of community. Cox's upbringing in Ireland focused on community not money. “For two years now I’ve had a proper job," she said with a laugh, "but for the 25 years before that, I’ve amassed a community that is my life. And that’s been of great value, not only to me, but broadly.”

McGrath talked about the journey of an idea — from the originator to the community of people in the arts — the producers, the lighting designers, etc. — who help realize the idea. He also said the ways in which people in the arts community challenge you on your idea echoes the questions that investors pose to entrepreneurs when they hear a pitch.

Roth discussed success metrics, especially in the early stages of a project. “I work in commercial theater. There’s always a financial metric. There’s also a critical metric. Did you fulfill the artistic project metric? The ‘do people love it?’ metric, which is sometimes tied to the financial metric, but sometimes not.”

Reflecting on the way many startups pivot over time, Roth spoke about taking on a project for certain reasons and expectations, but as the project progresses it becomes a different experience. 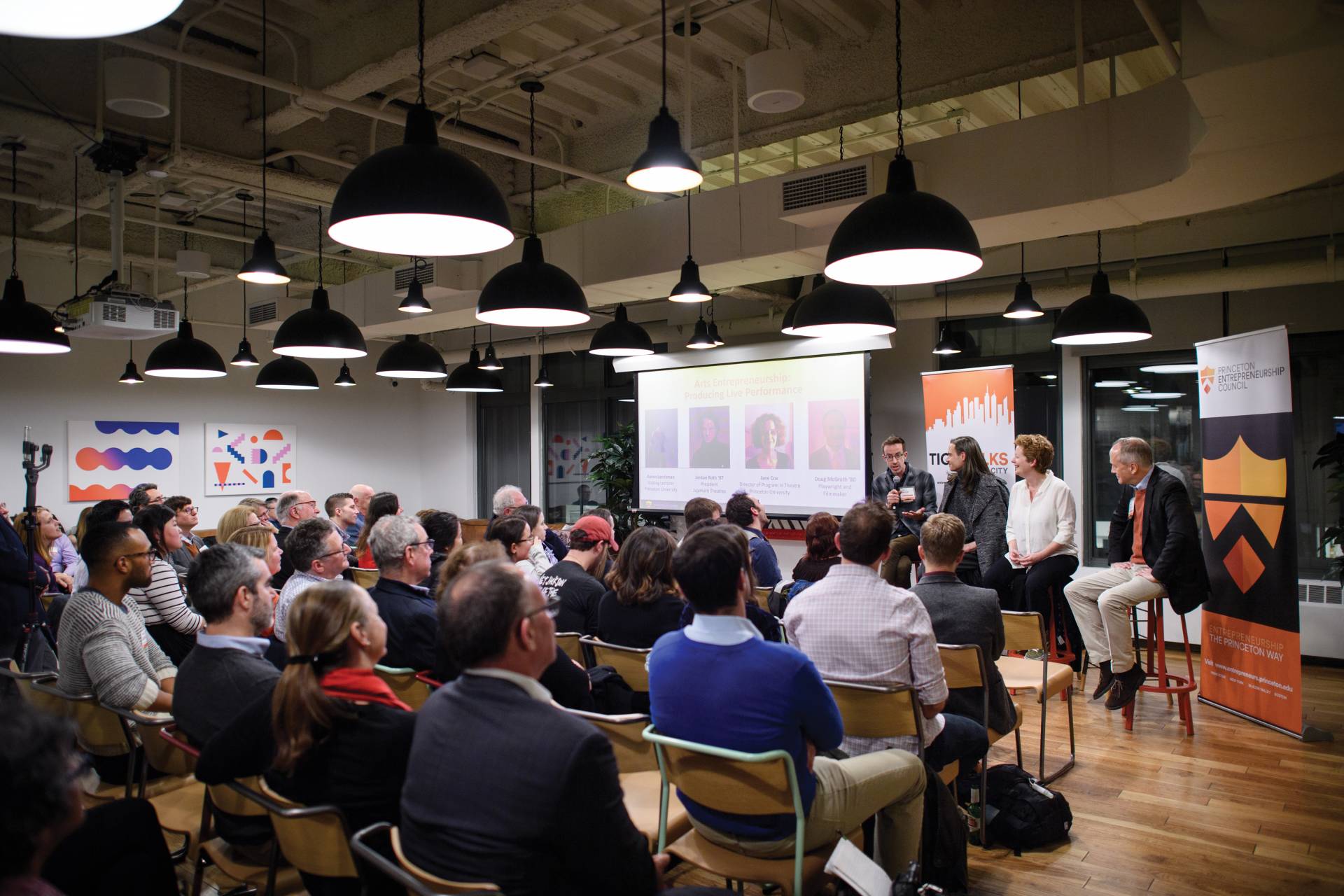 The panelists share stories from their professional lives — such as comparing the way people in the arts community challenge each others' ideas much in the same way that investors pose questions to entrepreneurs when they hear a pitch.

Scalability, another important theme in entrepreneurship, came up during the audience Q&A. Cox and Landsman observed that the more scalable the world becomes, the more valuable something not always scalable, like art, becomes. On the other hand, “commercial Broadway shows, musicals in particular, are built to scale,” Roth said. “They’re still high-risk because they don’t always work, they mostly do not. But when they do, they become cottage industries. They run for 5, 6, 15, 20 years on Broadway and spawn 9, 10, 12 national [tour] companies, international companies in other languages. ...They build fortunes.”

Leadership, too, plays an entrepreneurial role. In the arts it takes the form of being an advocate for your idea and yourself. “You’re advocating for the community that makes the work you make,” said Landsman.

Passion for your idea is something that matters in both the startup world and in the arts, the panelists agreed. “If you believe in what you’ve done, you owe it to your talent, and to the effort you put in,” said McGrath.

Arts advocates look to each other for ideas, hope in difficult economy