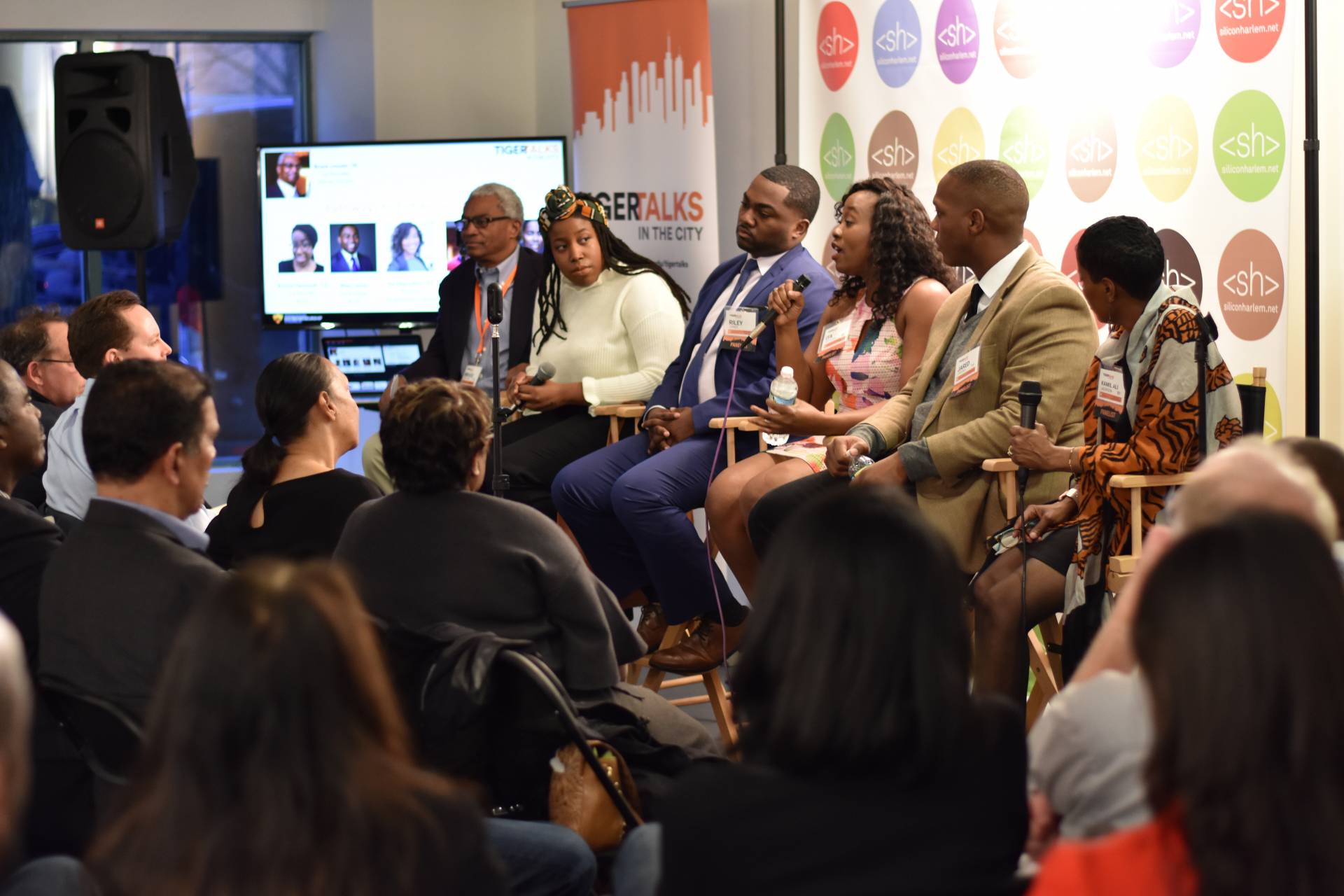 The “Pathways to Entrepreneurship” panel of the March 28 TigerTalks in the City event was held at the offices of Silicon Harlem in New York City. Black Princeton alumni founders and investors speaking about their experience as entrepreneurs included, from left: Bruce Lincoln, Class of 1979; Amina Yamusah, Class of 2013; Riley Jones, Ita Ekpoudom, Class of 2003; Jared Crooks, Class of 2011; and Kamil Ali Jackson, Class of 1981.

At the Princeton Entrepreneurship Council’s TigerTalks in the City event March 28 at the offices of Silicon Harlem in Upper Manhattan, attendees were treated to a powerful, candid and occasionally lighthearted discussion on entrepreneurship by a panel of black Princeton alumni founders and investors. 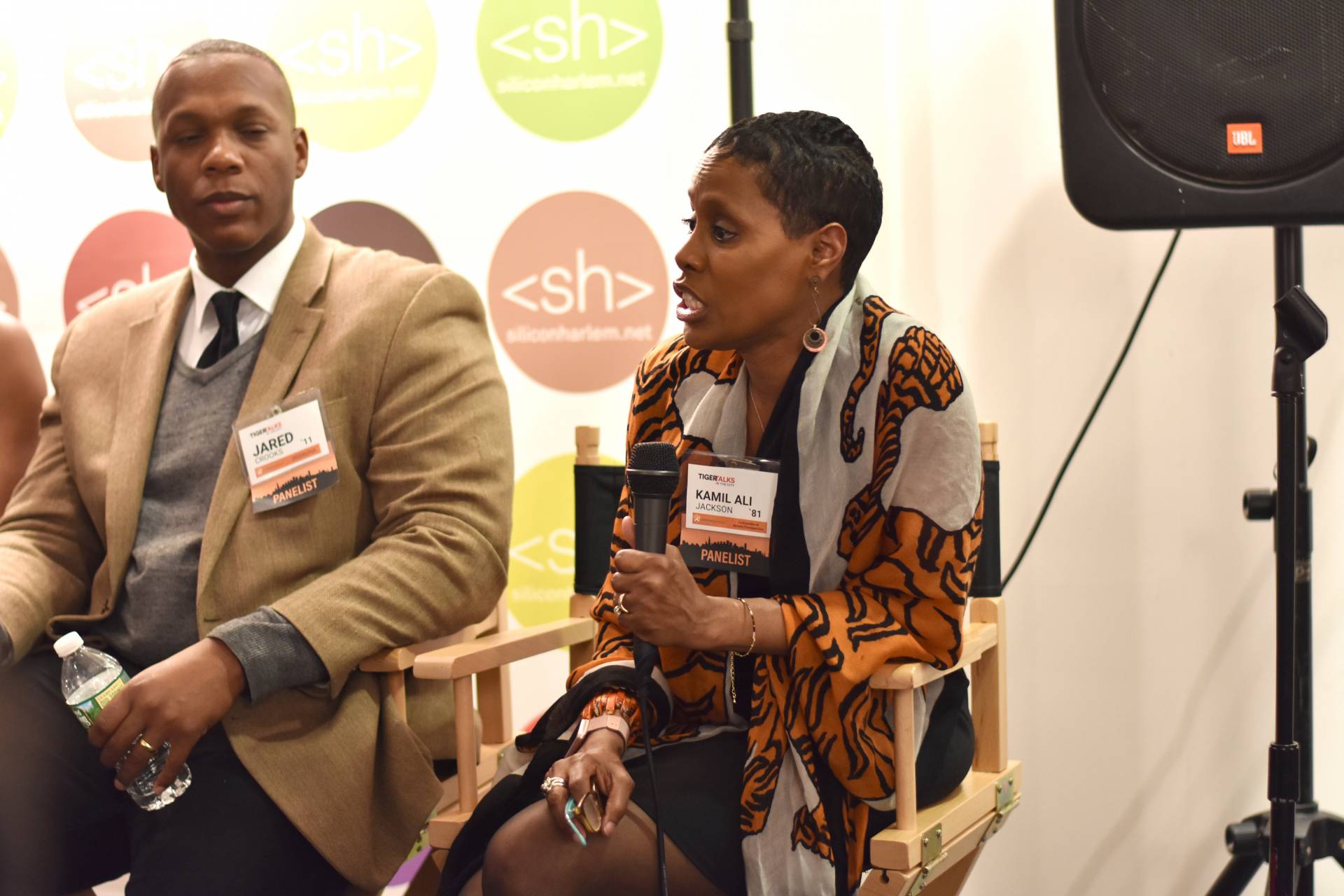 Panel moderator Bruce Lincoln, Class of 1979, co-founder of Silicon Harlem, opened the “Pathways to Entrepreneurship” discussion by asking about one pivotal moment for deciding to pursue entrepreneurship. Crooks remembered his moment clearly: “It was a Saturday at Whole Foods.” He spent that day guerilla marketing his first fruit-and-nut bar startup Nouri, planting product mockups on a shelf and watching what happened next. After seeing several shoppers pick up the Nouri product, Crooks knew his idea would work, and eventually real Nouri bars were placed on Whole Foods’ shelves.

Black entrepreneurship is not without its issues of race and gender. “These entrepreneurs, they’re finding ways to overcome issues that they encounter,” said Lincoln, then asking the panel for one burning issue that drives them each day.

For Jackson, it’s hiring diverse staff. She described how, after starting her third company in 2012 with seven people, the company now is publicly traded and has a staff of 171, so the organization needs to hire with diversity front of mind.

Ekpoudom is motivated by addressing gender imbalance in the venture world. “At GingerBread we back women entrepreneurs directly, and we also back women that are GP’s (general partners) at other funds, because you need to attack the problem at both ends,” she said. “We want to change the ratio of who has money and who is getting money. I hope that we see out of our portfolio a couple of billionaire women. Getting women to think more about their financial independence and freedom is what gets me excited to get up every day.”

Pivoting to a lighter question, Lincoln asked for examples of obstacles that the alumni had never thought of, or criticism of why there were going to be successful. Ekpoudom jumped right back in: “When I say we’re backing women entrepreneurs, they always say ‘wow, that’s a niche market’ and I say, ‘We are 51 percent of the population controlling $2 trillion of investable assets!’ The ex-trader in me takes that trade all day long.”

For Crooks, it was working in clinical trial logistics to help pharmaceutical companies. “We’re in a meeting with one of these larger firms talking about our end-to-end system, and these questions came up,” said Crooks. “Our co-founder was asked, ‘I see what you do, but why is he here?’ and pointed to me. ‘I built it.’ So it proved this out, that yes, there are certainly misconceptions. There are opportunities around that, but they definitely exist.”

During the Q&A, Yamusah addressed Anika Duffus, Class of  2022, on seeking advice: “Princeton is definitely the first place to start. … Also, I will find a person I want to connect with on LinkedIn, then I will search for their name on Eventbrite or on Meetup. It’s so valuable to meet people in person, especially if they’re successful at what they’re doing because they get inundated with cold emails. It really helps in building connections, so I find an event that the person is speaking at and go to the event, and I make sure I ask the first question. That has gotten us some really prominent advisers.”

Jones added: “Reach out to everyone you think is interesting. I’ll write the email for you right now: ‘Hi, I’m Anika, I’m a freshman student at Princeton University. I think what you’re doing is really cool and I’d love to talk to you about it over coffee. Do you have time in the next two weeks?’ I promise you if you send that off to 10 people, five people will get back to you.”

The evening also featured appearances by Manhattan Borough Deputy President Aldrin Bonilla, and Princeton’s LaTanya Buck, dean for diversity and inclusion, and Tennille Haynes, director of the Carl A. Fields Center for Equality and Cultural Understanding.

This TigerTalks event was a preview of entrepreneurial programming that will be available to attendees at the upcoming "Thrive" black alumni conference on campus in October. 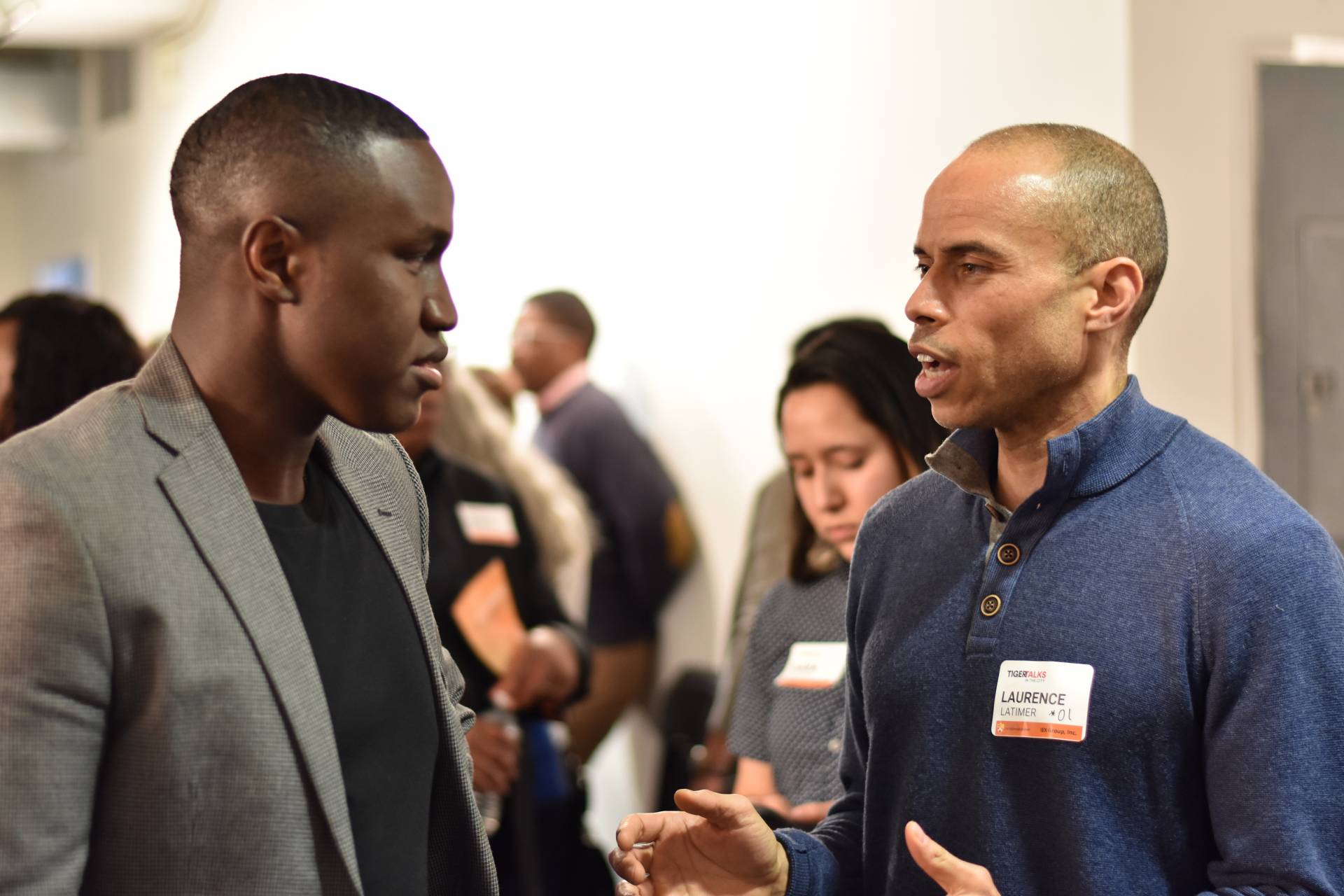 From left: Bayo Okusanya, Class of 2020, and Laurence Latimer, a 2001 graduate alumnus, chat at the networking reception after the panel discussion.