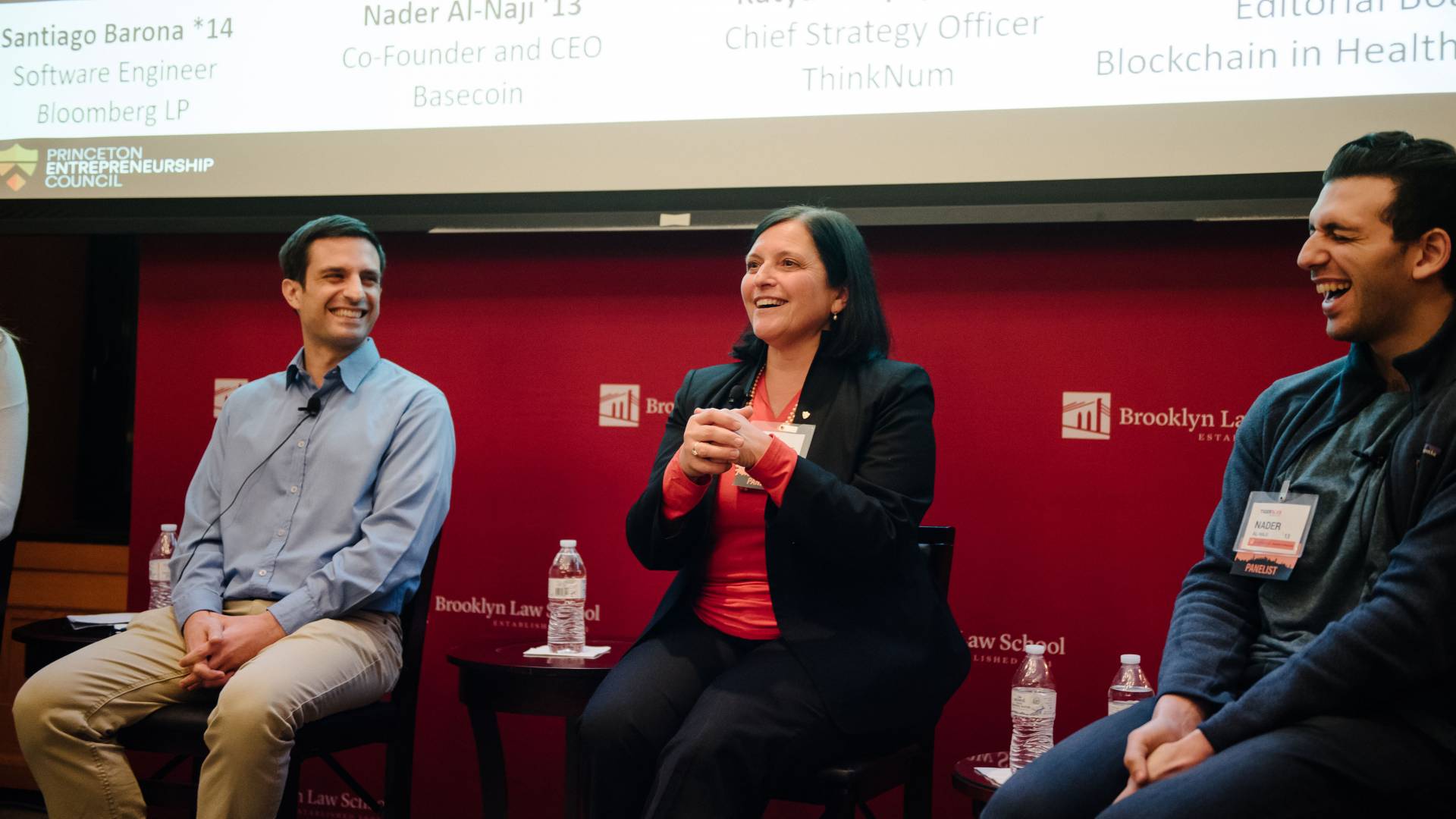 Princeton alumni panelists at the Feb. 22 TigerTalks in the City in Brooklyn focused on the topic of cryptocurrencies. Shown from left are 2014 graduate alumnus Santiago Barona; Florence Hudson, Class of 1980; and Nader Al-Naji, Class of 2013.

With cryptocurrencies and blockchain featured prominently in the daily news, a capacity crowd of Princetonians and friends gathered at Brooklyn Law School on Feb. 22 for TigerTalks in the City: Bitcoin, Blockchain, ICOs and More, co-sponsored by Princeton's Bendheim Center for Finance.

The latest installment of the Princeton Entrepreneurship Council’s signature panel discussion and networking receptions featured 2014 graduate alumnus Santiago Barona, software engineer at Bloomberg LP; Florence Hudson of the Class of 1980, member of the editorial board at Blockchain in Healthcare Today; Nader Al-Naji of the Class of 2013, co-founder and CEO of Basecoin; and Katya Chupryna of the Class of 2008, chief strategy officer at Thinknum. Dror Futter of the Class of 1986, partner at Rimon Law, moderated the discussion (edited and condensed below).

Barona on the origins of Bitcoin:

The 2008 release of the “Bitcoin: A Peer-to-Peer Electronic Cash System” white paper by Satoshi Nakamoto proposed a revolutionary system that could allow one user to securely transfer value to another user. This magnitude of this discovery was similar to the way the internet revolutionized the transfer of information. This was almost magical — people have been trying to crack this problem for decades. The magic behind Bitcoin was something called the blockchain. 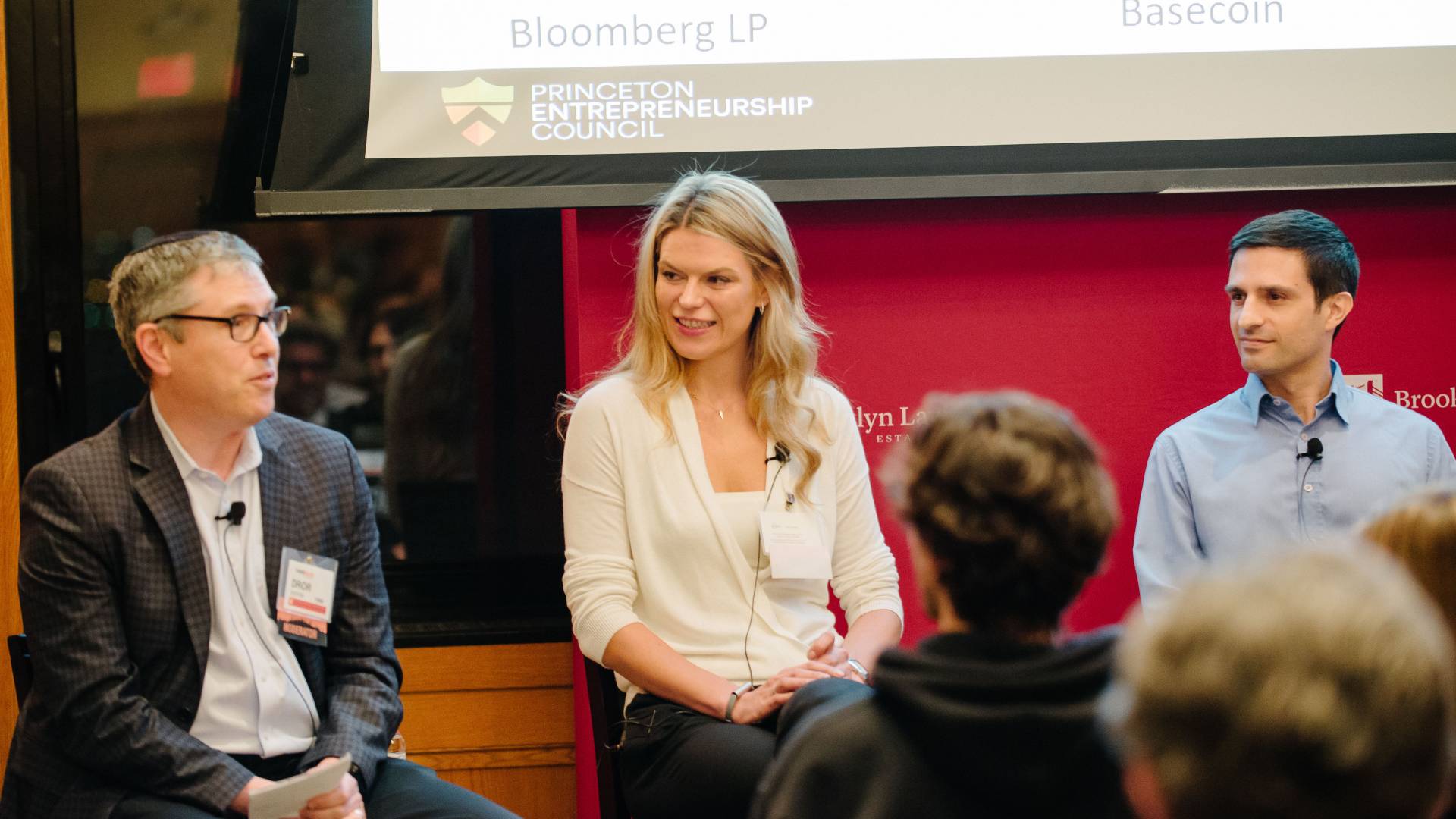 From left: Moderator Dror Futter, Class of 1986, speaks to the TigerTalks audience, as Katya Chupryna, Class of 2008, and Barona look on.

The magic of the blockchain is that it removes the need for a centralized trusted authority. All previous attempts at coming up with some sort of digital cash had one major flaw, which is that they still relied on trusted counter parties. This presented problems, especially in environments and cultures where trust was limited.  But all of a sudden, out of nowhere, this paper proposes a method to do without the central counter party. That’s the magic of blockchain: decentralization.

With my team, we’re working on a new cryptocurrency called Basecoin, which effectively is a cryptocurrency just like Bitcoin but without the volatility. We think of Bitcoin and cryptocurrencies as this technical innovation of running a [money] database without an owner, but we think that the rules for the Bitcoin database could be changed a bit to make it more attractive as a currency. In particular, we think that you can have an owner-less database with slightly more sophisticated rules that are effectively a monetary policy on the blockchain, that make the currency stable against reference instruments like the dollar.

I was asked this question by a journalist, if I applied my normal, “finance person” logic to the ICO market, what would I think?

The first question I’d ask is if there is any code behind it, or is it just a white paper? I was surprised to find that often it’s all open source, or 99.9 percent open source, The thing that I find shocking is that when you go onto GitHub [an open source software development platform], you’ll find out of the top 40 ICOs of 2017, less than half of them had repositories on GitHub. To me this means that either they’re doing it somewhere else — somewhere none of us have ever heard about — or they actually have not written any code. I was expecting much more substance behind it.

I think that it is important to refer back to the tools that financial companies and investors have been using for decades, even centuries. Fundamental economics and fundamental finance theory needs to be merged with technology that we have today — and not discarded completely. Then you can differentiate between the unicorn and the rest of the market, which for now looks to be largely fake.

If we are going to accelerate a cure for cancer, we need to share research data. There has been a cultural move to increased data sharing, but it needs to be done securely. There needs to be  trust in the human that is trying to get to the data. There also needs to be trust between devices, the Internet of Biomedical Things. When the glucose meter tells the infusion pump, “This is the glucose level,” you want everyone in the chain paying attention to the details. Blockchain is like a digital scrum — everyone is hanging onto each other — saying, “Wait a second, where’d you get that data?” What we are looking for is how to leverage blockchain to improve these codependent and interrelated elements in order to impact patient health and safety.

However, it is important that we understand the information that can be pulled out, and that we can sort it effectively.  For example, we can start to understand what’s going on with my own personal genomics versus the plant and animal genomics of where I grew up, versus the genomics of what I ate at a restaurant last week, etc. These tools will give us a lot of opportunity to increase data sharing benefiting precision medicine, but it has to be done safely.

There’s so much we can do with blockchain, I encourage you all to think about it. There are new applications that many people haven’t even thought of.

Futter added this anecdote about blockchain:

Walmart has been doing a pilot project to track mangoes through their supply chain. In Congressional testimony, they indicated that their ability to do food recalls, when there are issues with food safety, has dropped from seven days to under 10 seconds using blockchain technology. So the impact in these non-ICOs, non-crypto use cases can be really profound. 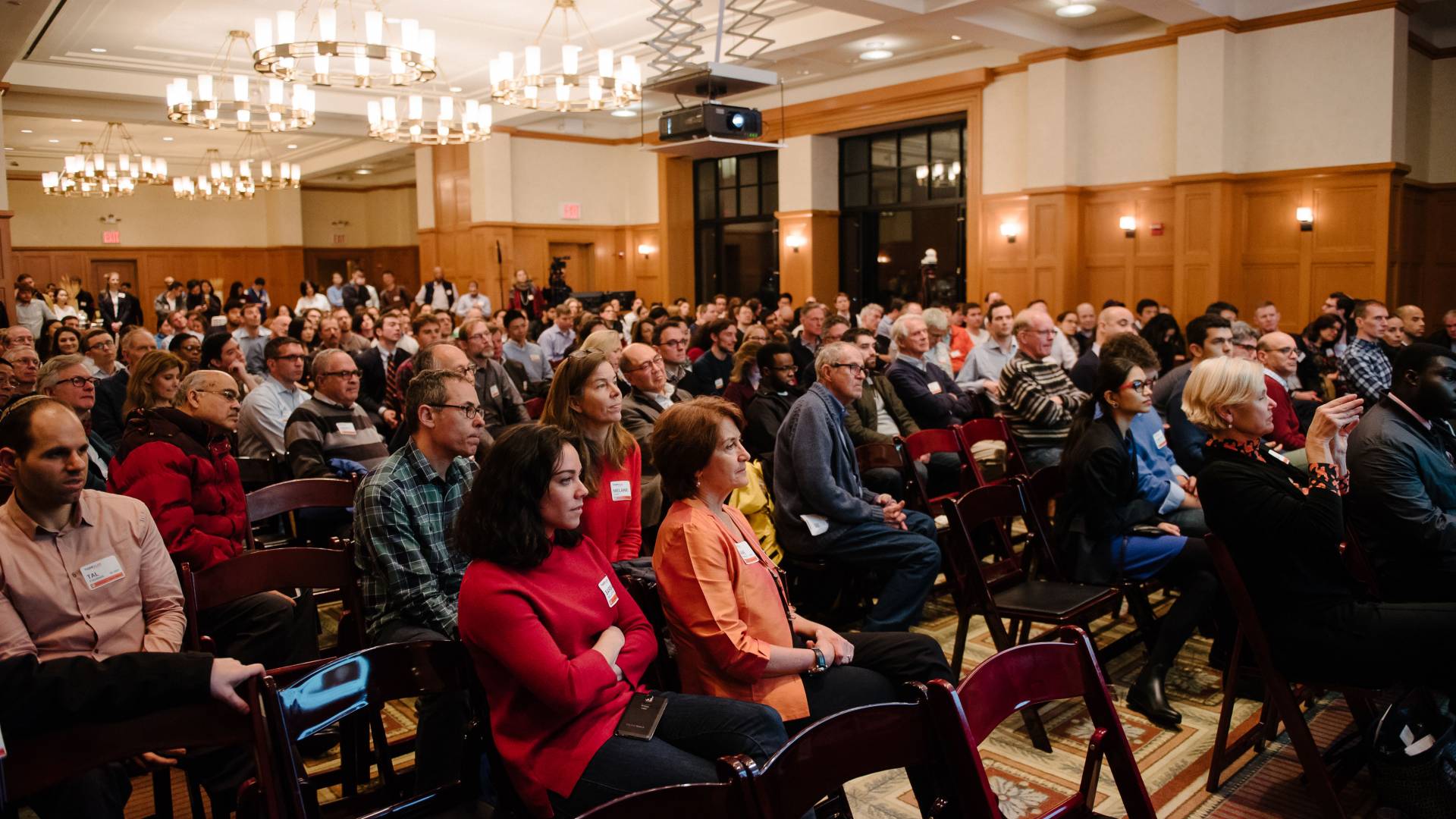 Over 300 Princetonians and friends attended the event, a new record for the series.

The panelists fielded a number of questions during a Q&A session.

Q. For years we’ve been talking about it [blockchain], and yet it remains very hard to explain. How much is this complexity an obstacle to adoption and usage of blockchains, Bitcoins and alternative currencies?

Hudson: It hasn’t been all figured out. Is it a barrier to adoption? There is a lot to figure out still and that is a barrier to entry, but that’s okay. We have to keep working it.

Futter: In internet terms, we’re in 1993. If you wanted to download a file in 1993, you needed to know how to work FTP. And we’re very much in that phase. There’s still a lot of user interface tools, a lot of middleware that still needs to be built out. The whole ecosystem is still just really in the earliest stages. But that didn’t mean that we gave up on the internet.

Q. Gazing into your crystal ball, a year from now, what do you think will be the most noteworthy change from where we are today?

Chupryna: By this time next year, we’ll be talking about specific applications, and blockchain will just be the system on which it’s running.

Al-Naji: Other than Basecoin being launched, I think the biggest change will be that venture capital financing is going to be seriously disrupted. I think that with an owner-less equity database that’s global, we will be able to raise money from the entire world in a way that still has accountability. Because when you raise money, you will give them a token that is fungible with yours, as the implementer of whatever you’re doing. So there will be some sense of accountability — if I hurt your token, then I hurt my token, a basic equity concept.

For smaller projects, it’s probably the case that the gatekeepers are going to be where they raise the money. But for really hot projects in particular, it’s probably going to continue to be the case where you snap your fingers and get a bunch of Ethereum from the entire world. And the VC’s are like “Whoa, what’s going on?” The gatekeepers are going to see an erosion of their market power.