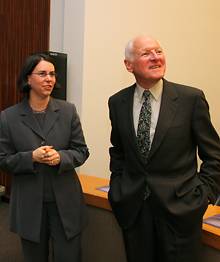 Below left: The author-meets-critic session in Robertson Hall drew a large crowd that included undergraduates, graduate students and faculty members from sociology and other departments.

On a recent Monday afternoon, nearly all of the professors in the sociology department, a good number of its seniors and graduate students, and three faculty members from other institutions assembled in a classroom in Robertson Hall.

What transpired for the next two hours was the inaugural event of the Princeton Dialogues in Sociology and Public Affairs, a series of forums in which a book by a junior faculty member is discussed and analyzed in an author-meets-critic symposium.

“To my knowledge, this has never been done anywhere in the country,” said Katherine Newman, professor of sociology and public affairs, who hatched the idea for the series. “As people hear about it (at other universities), they usually say, ‘Can we steal that idea?’”

The goal of the program is to showcase the accomplishments of junior faculty and give those faculty members an opportunity to receive valuable feedback from scholars with expertise in their field. At the same time, the forums expose students to a vigorous academic discussion in which they are invited to participate.

The March 7 event was the scene of lively debate over assistant professor Elizabeth M. Armstrong’s book, “Conceiving Risk, Bearing Responsibility: Fetal Alcohol Syndrome and the Diagnosis of Moral Disorder,” published in 2003 by Johns Hopkins University Press. The book questions the way in which the consumption of alcohol during pregnancy has come to be seen, in American society, as highly dangerous, despite the uncertainties about the relationship between alcohol and birth outcomes.

The symposium opened with three critics discussing the book. Comments from the audience and a response from the author followed.

David Rothman, director of the Center for the Study of Science and Medicine at the College of Physicians and Surgeons at Columbia University and one of the outside critics, observed that in reading the book, “it becomes overwhelmingly clear that we have a gorgeous example of a social construction of a disease.” But he said his views about why some doctors recommend that pregnant women abstain from alcohol differed from Armstrong’s, pointing out that physicians are risk-aversive by training.

“I would be more empathetic with the clinician,” Rothman said. “If you’re a pediatrician and you see a ‘preventable disease,’ you can’t help but be disturbed about how this came about” and want to do something to prevent it from occurring in the future, he said.

“It was a lively, fascinating session,” said professor Bruce Western. “Betsy did a superb job responding to some generous but probing commentary. We don’t often get the opportunity to learn about our colleague’s work in such an intellectually exciting forum and offer such great support to junior faculty at the same time. These events will be great for the department.”

The forum also attracted faculty from other departments, including assistant professor of anthropology Carolyn Rouse.

“Elizabeth Armstrong wrote a fabulous, thought-inspiring book, and the critics gave the audience a chance to appreciate the book in new ways,” Rouse said.

Alexandria Walton, a graduate student in the sociology department, was impressed with the turnout. “Looking around the room, this is the first time I’ve seen so many sociology faculty and students together in one room,” she said. For her, the event was a peek at what her future might be like should she decide to go into academics. “This is a look at what’s possible a few years down the road,” she said.

“The event was a wonderful example of how social science can take place in the public sphere,” said Emily Moiduddin, a graduate student in the Woodrow Wilson School who attended. “The respondents’ accolades and challenges helped me see what a strong piece of research Elizabeth Armstrong has produced. I learned about how to craft a solid, comprehensive piece of research.”

Armstrong relished the opportunity to hear detailed comments about her work from Rothman and the other two critics, Troy Duster, a sociology professor at New York University and president of the American Sociological Association; and Bruce Link, a professor of public health at Columbia University. The three visiting critics presented their own work to an audience of faculty and students the next morning at the second part of the event, dubbed the “Breakfast Dialogue.”

And for the students who attended, the event afforded an insightful look at how a scholar “responds to criticism off the cuff in a public forum,” Armstrong pointed out.

The second symposium, featuring assistant professor Mario Small’s book, “Villa Victoria: The Transformation of Social Capital in a Boston Barrio,” will be held on April 4.

“These events are a celebration of our pride in the junior faculty,” said Newman, “and a model of how to honor their intellectual contributions.”

Symposium at Princeton focuses on higher education among black Americans

Symposium focuses on Latinos in the United States