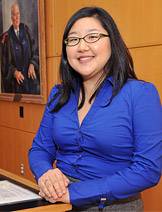 The annual Princeton Research Symposium offers graduate students and postdoctoral researchers from the sciences and humanities an opportunity to present their work to a broad audience of fellow students, faculty members, alumni and community members. Deborah Son Holoien, a graduate student in the Department of Psychology, was one of the participants in the Dec. 3 symposium, explaining her research on how people deal with interracial interactions.

As interdisciplinary collaborations among Princeton scholars continue to grow, it still can be unusual to hear an art historian describing Italian villas to a molecular biologist, or see a mechanical engineer snap a "slap bracelet" on his wrist to explain his research to a psychologist.

These sorts of interactions are quite normal at the Princeton Research Symposium, however. The annual event offers graduate students and postdoctoral researchers at the University the opportunity to present their work to a broad audience of fellow students, faculty members, alumni and community members.

The multidisciplinary symposium, which started in 2006, is organized by graduate students and is supported by the Graduate School and other University co-sponsors. "We recognized the need for our graduate students and postdoctoral researchers to have a forum where they can present their work and demonstrate the tremendous creativity that characterizes our University community," said William Russel, dean of the Graduate School.

The symposium is an important forum for early-career researchers, as mastering the ability to talk about research across disciplines has never been more important, said David Redman, associate dean of the Graduate School. "Support for science and humanities research depends on the public knowing why they should care about research," he said.

The event is a terrific opportunity for researchers to sharpen their presentation skills, added Victor Oyeyemi, a fourth-year graduate student in the Department of Chemical and Biological Engineering and one of the organizers of the event. "University students and researchers usually go to conferences that are specific to their field where the language is highly technical," he said. "At this symposium, you communicate with people who don't speak that language. 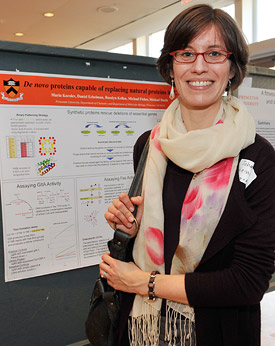 Johanna Heinrichs, a graduate student in the Department of Art and Archaeology whose work focuses on Venetian life during the Renaissance, visits the poster session at the Princeton Research Symposium. (Photo by Mark Czajkowski)

Showcasing a wealth of projects

The most recent symposium, held Dec. 3 in the Friend Center, featured 16 presentations and 14 research posters covering a variety of topics, including the exploration of the secrets of a 450-year-old Italian villa; models of how bacteria grow into slimy coatings called biofilms; an examination of how people of different races communicate; and a study aimed at unraveling what the Venus flytrap has in common with a slap bracelet.

A graduate student in the Department of Art and Archaeology, Johanna Heinrichs is fascinated by a Renaissance-era villa built by a Venetian nobleman. The stately building, located 50 miles southwest of Venice outside the town of Montagnana, was thought to be simply a headquarters for the nobleman's agricultural enterprise, but Heinrichs' research indicates the villa was actually his primary residence. Her findings contradict the prevailing view that wealthy Venetians considered Venice to be their center of social and cultural activities and spent little time in the surrounding countryside.

Presenting her work to an audience unacquainted with the details of Venetian life presented some challenges, but was very rewarding, said Heinrichs, whose adviser is John Pinto, the Howard Crosby Butler Memorial Professor of the History of Architecture. "The audience asked different sorts of questions from the ones asked by people in my field," Heinrichs said. "They made me think about issues that I hadn't thought about." 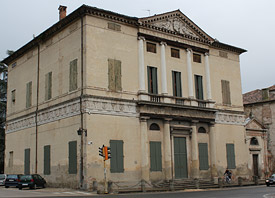 As part of her dissertation research, Heinrichs focuses on this villa in Montagnana, Italy, which was designed by Andrea Palladio in the mid-16th century for the Venetian nobleman Francesco Pisani. Heinrichs' work contradicts the prevailing view that wealthy Venetians considered the city to be their center of social and cultural activities. (Photo by Johanna Heinrichs)

Heinrichs' presentation on the social lives of Venetian nobility was preceded by a talk on the social lives of bacteria. People may not think of bacteria as social creatures, said Carey Nadell, a postdoctoral fellow in the Department of Molecular Biology, but in fact they are highly gregarious, forming densely populated communities that researchers call "biofilms." People who have skipped a day of brushing their teeth have had experience with biofilms, which form plaque on and between teeth.

Nadell is studying how individual bacterial cells grow into biofilms. His research, conducted with Bonnie Bassler, the Squibb Professor in Molecular Biology, suggests that bacteria secrete a glue-like substance that helps them bind to and benefit their close kin, but not unrelated bacteria. As a result, cells that secrete extracellular glue gain a competitive advantage by forming biofilms, although they give up the ability to easily disperse to new environments. The work was published in the Proceedings of the National Academy of Sciences in August. 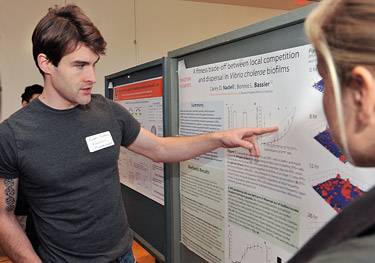 Carey Nadell, a postdoctoral fellow in the Department of Molecular Biology, presents a poster detailing his research on the social lives of bacteria. (Photo by Mark Czajkowski)

"I think it is critical for scientists to be able to communicate to people inside and outside their fields of expertise," said Nadell. He added another reason for participating in the symposium: "It is also just fun."

Just as bacteria have to get along, so do people. Deborah Son Holoien, a graduate student in the Department of Psychology, studies how people deal with interracial interactions through two primary mechanisms: trying to be colorblind and ignore race altogether, or embracing multiculturalism by highlighting racial differences.

Working with her adviser Nicole Shelton, a professor of psychology, Holoien conducted a study to explore which strategy is more effective in improving interracial interactions. Their work, which will appear in the Journal of Experimental Social Psychology, suggests that multiculturalism performs better at decreasing interracial difficulties than colorblindness, which can backfire and result in whites displaying more prejudice in certain situations.

Holoien said she heard about the symposium from a staff member in her department. "I decided to participate because I am excited to share my research," she said. 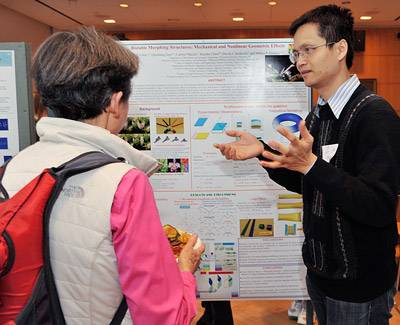 Zi Chen, who recently earned his Ph.D. in mechanical and aerospace engineering, describes his research on factors that cause structures to snap from one configuration to another. (Photo by Mark Czajkowski)

Excitement alone is not always sufficient for explaining difficult concepts, however. Sometimes a prop is needed. For Zi Chen, that prop is a slap bracelet, a toy wristband that snaps from a straight position into a curled position around the wrist. Chen, who finished his Ph.D. in December in mechanical and aerospace engineering, used the slap bracelet to illustrate his talk on how structures can switch rapidly between different shapes.

Researchers would like to apply these principles to constructing devices such as flexible robots, artificial muscles and deployable airplane wings. Chen is exploring the factors that cause structures to snap from one configuration to another in collaboration with his advisers: Mikko Haataja, an associate professor of mechanical and aerospace engineering; David Srolovitz, a former Princeton faculty member and now executive director of the Institute of High Performance Computing in Singapore; and colleague Qiaohang Guo at Fujian University of Technology in China. 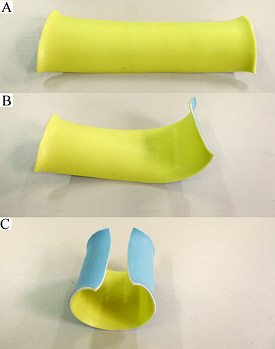 Chen employed a flexible toy wristband called a "slap bracelet" to illustrate his talk on how structures can switch rapidly between different shapes. His work could have applications in constructing devices such as flexible robots, artificial muscles and deployable airplane wings. (Images courtesy of Zi Chen)

"It turns out that nature has been experimenting with these multistable structures for millions of years," said Chen, whose work on a related topic was published last year in Applied Physics Letters. "For example, the Venus flytrap, one of the fastest moving plants, can be triggered to transition from an open state to a closed state in the blink of an eye to capture insects."

During the symposium's poster session, Chen and the presenters mixed with fellow researchers, alumni and community members, including a group of high school students from the Peddie School in Hightstown, N.J. "From our point of view this is a great thing that Princeton does because our students have the opportunity to meet graduate students and learn what makes a good poster," said Shani Peretz, chair of the science department at the school.

The event, which drew an audience of about 100 people, was supported by the Graduate School, the School of Engineering and Applied Science, the Office of Graduate Alumni Relations, the McGraw Center for Teaching and Learning, the Graduate Student Government and the Department of Molecular Biology.

The day was capped by a keynote presentation by Anthony Grafton, the Henry Putnam University Professor of History, who commented on the energy that the researchers brought to their presentations. "What you have here," he said, "is smart, creative people talking about their favorite subject — their research."

The next Princeton Research Symposium will take place Nov. 17. Attendance is free and open to all. More information, including pictures and videos from previous events, is available on the symposium website.