Graduate students and early-career researchers took the podium at the Princeton Research Symposium held at the Friend Center on Sunday, Oct. 20, to present their findings on a range of topics, from an analysis of the ban on short-selling during the financial crisis, to how to reduce the ecological footprint of fast-growing cities such as Dubai, to designing drugs that target tuberculosis, and much more. 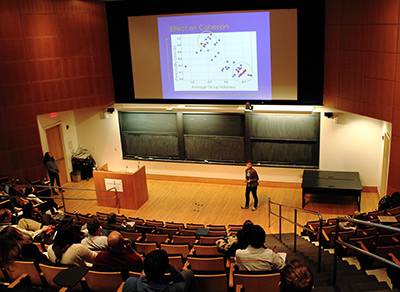 The annual Princeton Research Symposium gives graduate students and early-career researchers an opportunity to present their work. Above, Olivia Guayasamin, a graduate student in ecology and evolutionary biology, shares her research — a quantitative analysis of social behavior in the zebrafish. (Photo by Yong Lin Kong for the Office of the Dean for Research)

The annual event is aimed at giving early-career researchers the opportunity to give talks and poster presentations geared toward a general audience, with the goal of enhancing communication skills and promoting the exchange of information. The result is an engaging variety of presentations, said event co-organizer Joshua Spechler, a graduate student in mechanical and aerospace engineering.

"We tried to mix up the talks so that the social sciences, humanities, engineering and the natural sciences were included in each session," said Spechler, who has presented at the event for the past two years with co-organizer John Cannarella, also a doctoral candidate in mechanical and aerospace engineering. 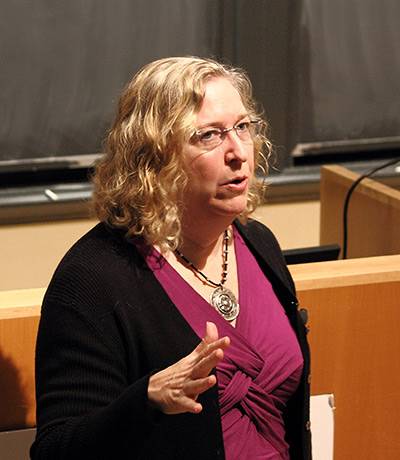 Wendy Laura Belcher, an assistant professor of comparative literature and African American studies, talks about her research on early African manuscripts and what they reveal about the lives of women. (Photo by Yong Lin Kong for the Office of the Dean for Research)

In addition to student presentations, talks were given by Wendy Laura Belcher, an assistant professor of comparative literature and African American studies, and Freeman Dyson, a renowned physicist at the Institute for Advanced Study in Princeton.

The event is free and open to the public, and is organized by a graduate student team with the support of the Graduate School and other departments on campus, said Spechler, whose faculty adviser is Craig Arnold, a professor of mechanical and aerospace engineering. "Craig encourages his students to pursue opportunities to communicate about our research," Spechler said. "I think a lot of professors at Princeton embrace that spirit."

"The efforts of co-chairs John Cannarella and Josh Spechler produced a highly successful symposium," said William Russel, dean of the Graduate School. "The audience — encompassing students, graduate alumni who came to Princeton for the 'Many Minds, Many Stripes' conference, and townsfolk — observed and participated throughout the day," he said. 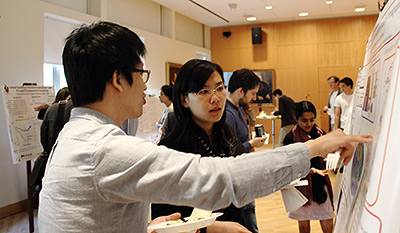 Attendees view posters explaining the findings by Princeton graduate students and postdoctoral researchers. (Photo by Yong Lin Kong for the Office of the Dean for Research)

Graduate student Haoshu Tian explored the effectiveness of the U. S. government's decision to shore up the price of financial stocks in September 2008 by temporarily banning short-selling of those stocks. He explained that determining the policy's effectiveness has proved difficult because it is impossible to know what would have happened had short-selling not been banned.

Tian, who is earning a Ph.D. in applied and computational mathematics, addressed this problem by comparing the price of banned financial company stocks to prices of stocks from companies that had large financial components but were not banned. "I found that the ban on short-selling had only a moderate and temporary effect on price," he said. Tian is advised by Weinan E, a professor of mathematics and applied and computational mathematics; Christopher Sims, the John F. Sherrerd '52 University Professor of Economics and a Nobel laureate in economics; and Harrison Hong, the John H. Scully '66 Professor in Finance.

Kristin Bietsch, a graduate student earning her Ph.D. in Princeton's Office of Population Research, explored why women in rural Tanzania who are infected with HIV give birth to fewer children compared with non-infected women. Through data collected by Tanzania's National Institute for Medical Research, she determined that the discrepancy in fertility arises from differences in factors such as co-infection with sexually transmitted diseases, age and marital status.

Bietsch said she valued the opinions on her research that she received from scholars outside the specialized area of demography. She said she also found it helpful to hone her speaking skills. "I will be on the job market in a year, so I welcomed the opportunity to explain my research to a broad audience," she said. Bietsch's adviser is James Trussell, the Charles and Marie Robertson Professor of Public and International Affairs. 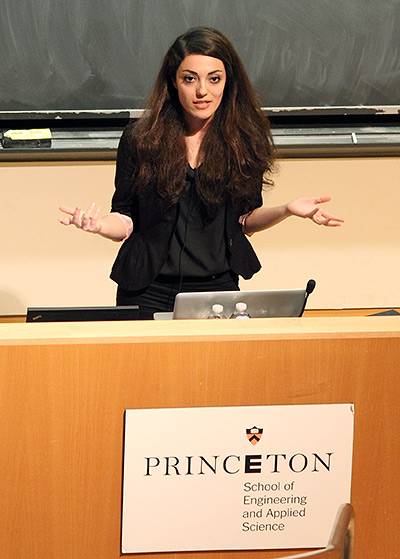 Pardis Mirmalek, a master's degree candidate in architecture, presents her research that evaluated skyscraper-filled cities in the Middle East. She found that horizontal rather than vertical growth of cities such as Dubai would help reduce the ecological impact they have while better meeting residents' needs. (Photo by Yong Lin Kong for the Office of the Dean for Research)

Pardis Mirmalek, a master's student in the School of Architecture, looked at the ecological footprint of the skyscraper-filled cities of the Middle East, including Dubai, Abu Dhabi and Doha. These cities, Mirmalek found, not only consume vast amounts of energy, they also fail to meet residents' needs for transportation, shopping and community engagement. Her analysis indicated that horizontal rather than vertical growth would enable the cities to reduce energy costs while meeting residents' needs. Her adviser is Jesse Reiser, a professor of architecture.

Thomas Morrell, a doctoral candidate in chemistry, discussed his progress in determining new drug targets for tuberculosis, a disease that causes roughly 1.4 million deaths worldwide and is increasingly resistant to existing drugs. One reason the disease is so hard to treat, Morrell said, is that the bacterium uses the body's own immune cells to maintain the infection.

By studying the structure of a protein called PtpB that plays a crucial role in infection, Morrell is determining how the protein may function within the infected individual. "We use computer simulations to predict how the protein structure can change, and then we can test those predictions in laboratory experiments," Morrell said. His adviser is Haw Yang, associate professor of chemistry.

Prizes were awarded to the top three talks and poster presentations. The first place prize of $300 for the best talk went to Nicolas Pégard, a graduate student in electrical engineering, for his presentation on microfluidic devices for 3-D microscopy with applications in biology research. Pégard is advised by Jason Fleischer, an associate professor of electrical engineering. The second place prize of $200 went to George Khoury, a graduate student in chemical and biological engineering, for his talk on novel protein-structure prediction tools that can be used to design new proteins for biotechnological applications. Khoury is advised by Christodoulos Floudas, the Stephen C. Macaleer '63 Professor in Engineering and Applied Science. The third prize of $100 went to Friederike Funk, a graduate student in psychology, for presentation of her research on the effectiveness of punishment as retribution, deterrent and communication. Funk is advised by Deborah Prentice, the Alexander Stewart 1886 Professor of Psychology and Public Affairs; Alexander Todorov, professor of psychology; and John Darley, the Dorman T. Warren Professor of Psychology, Emeritus.

The first place prize of $300 for the best poster was awarded to George Khoury for clear communication of the novel protein-structure prediction tools; the second place prize of $200 went to Thomas Morrell for his poster on a new target for tuberculosis treatment, and the third place price of $100 went to Wenyang Li, a graduate student in molecular biology, for her poster on screening for novel regulators of breast cancer metastasis. Li is advised by Yibin Kang, the Warner-Lambert/Parke-Davis Professor of Molecular Biology.

In addition to support from the Graduate School, the event was sponsored by the School of Engineering and Applied Science, the McGraw Center for Teaching and Learning, the Graduate Student Government Events Board, the Princeton Institute for the Science and Technology of Materials, the Office of the Dean for Research and the departments of molecular biology and chemistry.