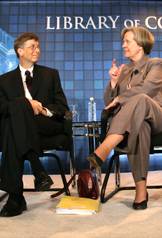 Princeton President Shirley M. Tilghman and Microsoft Corp. Chairman and Chief Software Architect Bill Gates talked about the importance of innovation during a panel discussion at the Library of Congress.

At left: The full panel included, from left: James Fallows of The Atlantic Monthly, who was the moderator; Phillip Bond, undersecretary for technology in the U.S. Department of Commerce; U.S. Sen. Patrick Leahy of Vermont; Gates; Tilghman; U.S. Rep. David Dreier of California; and Rick Rashid, senior vice president of Microsoft Research.

The discussion on "The Importance of Innovation to the Future of the Nation" at the Library of Congress was organized by Microsoft to kick off its Tech Fair 2005.

It opened with comments by Microsoft Corp. Chairman and Chief Software Architect Bill Gates, who termed today's climate for innovation "a bit scary," noting a declining interest in science among U.S. students as well as a downturn in investment in education and research. "We're quite concerned that the U.S. will lose its relative position in something that's very critical to the economy," he said. "The high-paying jobs are there, but the pipeline is just not what it needs to be."

Tilghman said that universities are doing a "stellar job" of training scientists and engineers, but that students often lose interest in those fields long before they reach the postsecondary level.

"There's a deep paradox in American society," she said. "The United States has the finest higher education system in the world -- that’s indisputable. We have a really failing K-12 education system, and that's simply incompatible with the long-term goals" of remaining globally competitive in science, technology and innovation.

"Too often, by the time they get to us, [students] are 'mathphobic', they're 'sciencephobic,' despite the fact that I'm convinced many of them have the talent to become great scientists," added Tilghman, a world-renowned scholar and leader in the field of molecular biology.

Gates and Tilghman also pointed to another pipeline problem: the declining number of students from other countries who study science here and stay in this country. Tilghman said that the number is shrinking in the wake of post-9/11 changes in visa policy. She cited a report issued last month by the Council of Graduate Schools indicating that there was a 5 percent decline in international graduate student applications in 2005, following a 28 percent decline in 2004.

In addition, she said that many of the international students who graduate from universities in this country are finding better opportunities back home than they once did, reducing the pool of talented scientists and engineers who remain in the United States.

Other panelists for the program were: U.S. Sen. Patrick Leahy of Vermont; U.S. Rep. David Dreier of California; Phillip Bond, undersecretary for technology in the U.S. Department of Commerce; and Rick Rashid, senior vice president of Microsoft Research. The discussion was moderated by James Fallows of The Atlantic Monthly.

Turning to the topic of federal funding for basic research, Tilghman agreed with other panelists that investment in high-risk research is pivotal to major advances in technology. She pointed out, however, that the largest source of federal funding for this type of research comes from the Defense Advanced Research Projects Agency, which has been cut by 20 percent in President Bush's fiscal year 2006 budget request.

She added that the country needs to make an investment where the "focus is long term and the vision is bold," citing energy research as an area that needs significant attention, given the 50-year outlook for the availability of fossil fuels.

On the issue of increasing the number of women in science and engineering, Tilghman said, "There is an enormous amount we can do." She credited former Massachusetts Institute of Technology President Charles Vest for bringing the issue to the fore, and said that most major research universities are now working very hard on a number of initiatives to encourage more women to pursue careers in science and engineering.

"If you need a good reason why we should do it, it comes back to manpower (or womanpower) issues," she said. "If we are essentially ignoring half of the population as a potential pool from which to draw scientists and engineers, we will have a less distinguished scientific enterprise."

Tilghman was asked at what point girls appear to lose interest in math and science. She said that there seems to be a drop-off at every level -- from middle school to graduate school. "There's no period in the entire career path where work does not need to be done," she said.