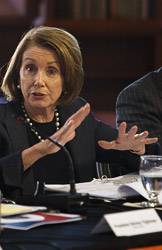 Nancy Pelosi, speaker of the U.S. House of Representatives, joined Princeton University President Shirley M. Tilghman, U.S. Rep. Rush Holt and other national leaders at Princeton to map out a strategy to renew the nation's support of physical sciences and energy research. Pelosi told a roundtable of business, education, science and political leaders that science is central to Congress' agenda but reminded the group there will be competition for scarce resources. 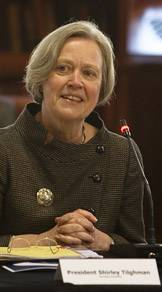 Tilghman hosted the discussion on the need to boost the support of science as a way of addressing the country’s economic ills. Photos: Brian Wilson

National leaders in politics, business, research and education, including Princeton University President Shirley M. Tilghman, U.S. House Speaker Nancy Pelosi and U.S. Rep. Rush Holt, met on campus today and called for renewing America's commitment to science and technology. Such an effort, they said, may be the best long-term cure for the nation's ailing economy.

Following a two-hour meeting in Chancellor Green, participants in the "Innovation Agenda" roundtable spoke at a press conference, spelling out their goals for enhancing support for the physical sciences as well as expanding energy research. 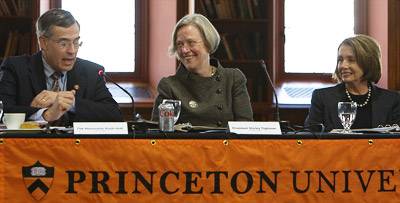 From left, Holt, shown here with Tilghman and Pelosi, argued that failure to invest in physical sciences and energy research will continue to impair the nation's economic health.

Those concerns did not fall on deaf ears.

"I have said over and over again, if you want to know the agenda for this new Congress, remember four words: science, science, science and science," Pelosi said. However, referring obliquely to current crises, she warned there would be competition for resources in the coming months and that supporters of science must become active advocates for science research funding.

She pledged her support to the effort. "We stand by this as the most important investment that we can make in health and education and energy independence, job creation and the defense of America," she said. 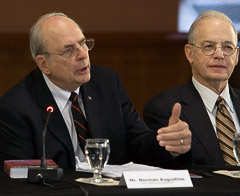 Norman Augustine (left), retired president and CEO of Lockheed Martin, described science as an economic engine. Its central role in economic growth, he said, is not always appreciated by either scientists or the general public. He was joined at the roundtable by Princeton University President Emeritus Harold T. Shapiro.

The idea for the meeting, according to Tilghman, was to bring research to the forefront as a critical tool to fix current economic woes. The disappearance of many of the country's leading industrial laboratories, she said, leaves research universities with a central -- and lonely -- role. "If you are not getting critical new ideas and new discoveries from here, there is no place else in the country where it can happen," Tilghman said.

Tilghman and Pelosi came up with the idea for the roundtable several months ago. The main idea, according to Tilghman, was to answer "why now may be the most important time in the last three or four decades that we make a very serious investment in the kind of innovation and creativity that have always fueled this country and this economy."

Holt praised the prescience of Tilghman and Pelosi in planning the meeting and applauded the event as coming at the perfect time.

"We should make a commitment as a nation to research and development," said Holt, a physicist and former assistant director of the Princeton Plasma Physics Laboratory. "Science and scientific research," he continued, "are not luxuries to be engaged in in plush times, but rather they are the basis for economic growth, economic prosperity and quality of life."

He characterized the discussion as "hopeful" and one that would provide leaders with an opportunity to "improve people's lives and well-being." Members of the roundtable, he said, were "remarkably succinct and rich in what they had to say," and provided him with the "motivation to do it quickly."

National leaders in science and technology shared their concerns about scientific funding and how it could benefit the country's future if supported properly. Members of the roundtable included, from left: Shirley Jackson, president of Rensselaer Polytechnic Institute; Princeton Professor Michael Oppenheimer; Peter Kim, president of Merck Research Laboratories; and Maria Zuber, head of the Department of Earth, Atmospheric and Planetary Sciences at the Massachusetts Institute of Technology.

One member of the roundtable suggested that the focus on science and technology, though warranted, may not be clear enough for those outside the mainstream of science.

"This is not about science and engineering -- this is about jobs, about jobs for everyone," said Norman Augustine, the former president and CEO of Lockheed Martin. The majority of the country's adult population, he said, is dependent on the science sector for their jobs and their future.

"I suspect that the people who years ago were working on quantum mechanics never had it in mind that they would provide our BlackBerries, our cell phones, or our iPods or what have you," he said. The science that paved the way for those products, he noted, also has produced all sorts of nonscience jobs in manufacturing, marketing, sales and maintenance. "If you pull the curtain back, you usually find that science is at the root of so many things you use every day," added Augustine, who earned his bachelor's and master's degrees in engineering from Princeton.

He viewed the event as an important one for science. "Today might be a day we all remember, when we kind of turned a corner and began creating jobs for people in our entire society," he said.

Roundtable member Michael Oppenheimer, Princeton's Albert G. Milbank Professor of Geosciences and International Affairs in the Woodrow Wilson School of Public and International Affairs, was heartened by the meeting. Oppenheimer, an expert in global climate change, said that science needs consistent funding over the long term and support to reinvigorate science education to bring in a new generation of young scientists.

"It can be done -- what it requires is political leadership," Oppenheimer said. "We can look forward to a new day with leadership such as [President-elect] Barack Obama, Nancy Pelosi and Rush Holt." 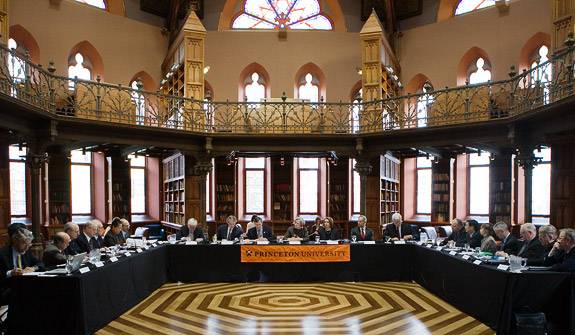 Chancellor Green was the setting for a roundtable meeting on innovation and competitiveness in which national leaders in the science and technology community started a dialogue about how best to maintain the country's leadership in basic research and innovation.

In addition to Augustine, other business leaders attending were: Craig Barrett, chairman of the board of the Intel Corp.; and Peter Kim, president of Merck Research Laboratories.

Leading scientists, in addition to Oppenheimer, included: Bruce Bursten, president of the American Chemical Society; Francis Collins, former director of the National Human Genome Research Institute; Phillip Griffiths, a member of the School of Mathematics at the Institute for Advanced Study; Thomas Mason, director of the Oak Ridge National Laboratory; Jeremiah Ostriker, professor of astrophysical sciences at Princeton and director of the Princeton Institute for Computational Science and Engineering; and Maria Zuber, head of the Department of Earth, Atmospheric and Planetary Sciences at the Massachusetts Institute of Technology.