As part of the American Recovery and Reinvestment Act (ARRA), Princeton University has received $23 million in research funding from the Air Force Office of Scientific Research, the U.S. Department of Energy, the National Institutes of Health and the National Science Foundation.

The grants will fund some 60 projects in wide-ranging fields, including energy, mathematics, engineering, meteorology, computer science, politics and neuroscience. Additional awards will be announced over the next several months.

In addition to these funds, the U.S. Department of Energy's Princeton Plasma Physics Laboratory (PPPL), which is managed by the University, recently received $1.8 million in Recovery Act funding to support innovative experimental approaches to fusion and develop specialized instrumentation to enable highly precise measurements during fusion experiments, bringing the total amount of ARRA funding awarded to the lab to $16.9 million. This new award is in addition to previous ARRA grants to PPPL, including $13.8 million in support of fusion energy research and infrastructure improvements. 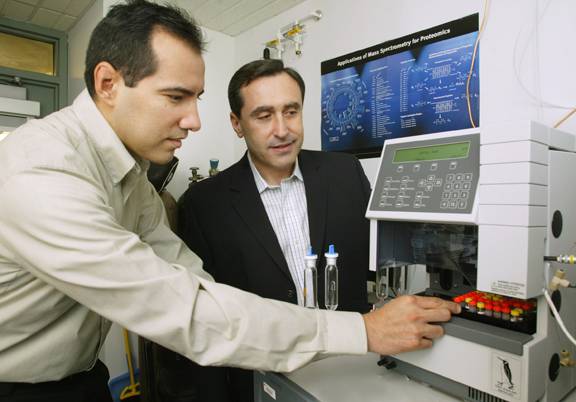 Biologist Benjamin Garcia (left), chemical engineer Christodoulos Floudas (right) and chemist Joshua Rabinowitz (not pictured) were awarded $1.3 million from the National Science Foundation to develop a computational platform to extract meaningful information from the vast quantities of data gained by mass spectrometry, the leading technique for chemical analysis of proteins and other compounds produced during cellular processes. By addressing this information bottleneck, their work could overcome major barriers in the field and help pave the way for significant advances in biological research. (Photo: Frank Wojciechowski)

"America's economic prosperity, entrepreneurial spirit and openness to innovation are constantly nourished by scientific research," said U.S. Rep. Rush Holt. "The $23 million in federal stimulus funding received by Princeton University will have an immediate and long-term impact on the economy in central New Jersey. In December 2008, I arranged a roundtable discussion at Princeton with President [Shirley M.] Tilghman, Speaker of the House Nancy Pelosi, Congressional leaders, and national leaders in the science and technology community. The seeds planted there resulted in more than $22 billion in Recovery Act funding for science facilities and research and development."