As part of the American Recovery and Reinvestment Act (ARRA), Princeton University has received $24.9 million in research funding from the Air Force Office of Scientific Research, the U.S. Department of Energy, the National Institutes of Health and the National Science Foundation. In addition, the University has been notified that two scientists will receive $750,000 each as part of the Department of Energy's new Early Career Research Program.

The Recovery Act grants will fund more than 60 projects in wide-ranging fields, including energy, mathematics, engineering, meteorology, computer science, politics and neuroscience. Additional awards will be announced over the next several months.

In addition to these funds, the U.S. Department of Energy's Princeton Plasma Physics Laboratory (PPPL), which is managed by the University, recently received $1.8 million in Recovery Act funding to support innovative experimental approaches to fusion and develop specialized instrumentation to enable highly precise measurements during fusion experiments, bringing the total amount of ARRA funding awarded to the lab to $16.9 million. This new award is in addition to previous ARRA grants to PPPL, including $13.8 million in support of fusion energy research and infrastructure improvements. Additionally, the lab has been notified that a PPPL physicist will receive a $2.5 million award through the new DOE Early Career Research Program. 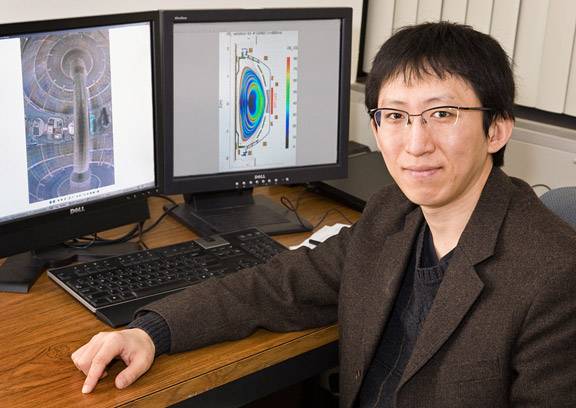 Jong-Kyu Park, a staff research physicist at the Princeton Plasma Physics Laboratory, will receive $2.5 million over five years as part of the Department of Energy's new Early Career Research Program. It will further his work in creating a numerical tool to calculate the effects of applying small amplitude, three-dimensional magnetic fields to fusion devices called tokamaks. These magnetic fields can significantly improve the ability of tokamak vessels to contain fusion reactions. Park received his Ph.D. in plasma physics from Princeton in 2009 and immediately joined the PPPL staff. He is shown here with images of the PPPL's National Spherical Torus Experiment. (Photo: Elle Starkman)

"America's economic prosperity, entrepreneurial spirit and openness to innovation are constantly nourished by scientific research," said U.S. Rep. Rush Holt. "The $24.9 million in federal stimulus funding received by Princeton University will have an immediate and long-term impact on the economy in central New Jersey. In December 2008, I arranged a roundtable discussion at Princeton with President [Shirley M.] Tilghman, Speaker of the House Nancy Pelosi, Congressional leaders, and national leaders in the science and technology community. The seeds planted there resulted in more than $22 billion in Recovery Act funding for science facilities and research and development."