As part of the American Recovery and Reinvestment Act (ARRA), Princeton University has received more than $17 million in research funding from the Air Force Office of Scientific Research, the National Institutes of Health and the National Science Foundation.

The grants will fund some 40 projects in wide-ranging fields, including energy, mathematics, engineering, meteorology, computer science, politics and neuroscience. More awards will be announced over the next several months.

In addition to these funds, the U.S. Department of Energy's Princeton Plasma Physics Laboratory (PPPL), which is managed by the University, received an ARRA grant of $13.8 million to support fusion energy research and infrastructure improvements.

"Princeton is honored to receive these stimulus funds, which recognize the potential for extraordinary economic and societal impact in the work being done by our world-class research community," said A.J. Stewart Smith, Princeton's dean for research and the Class of 1909 Professor of Physics. "Whether advancing the understanding of mathematics, developing cleaner-burning jet fuels or gaining deeper insight into the workings of the human brain, the knowledge generated in the work supported by the American Recovery and Reinvestment Act will address a wide range of national goals and contribute to solving many of the greatest global challenges of the 21st century. 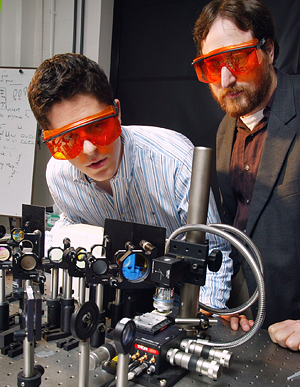 Craig Arnold (right), associate professor of mechanical and aerospace engineering, is one of the Princeton faculty members who has received research funding through the American Recovery and Reinvestment Act. Here, he works with postdoctoral researcher Romain Fardel to examine an experimental setup for printing ultrasmall patterns over wide surface areas. Mirrors and lenses direct two laser beams to the center device, which writes lines and dots that are 100 nanometers wide, or 200 times thinner than a human hair. Such tiny patterns are key to many areas of electronics, biology and energy production. (Photo: Frank Wojciechowski)

"America's economic prosperity, entrepreneurial spirit and openness to innovation are constantly nourished by scientific research," said U.S. Rep. Rush Holt. "The more than $17 million in federal stimulus funding received by Princeton University, in addition to the $13.8 million received by the PPPL, will have an immediate and long-term impact on the economy in central New Jersey. In December 2008, I arranged a roundtable discussion at Princeton with President [Shirley M.] Tilghman, Speaker of the House Nancy Pelosi, Congressional leaders and national leaders in the science and technology community. The seeds planted there resulted in more than $22 billion in Recovery Act funding for science facilities and research and development."

Princeton's Office of the Dean for Research has provided brief summaries of the stimulus-funded work that will take place at Princeton on a new website. Additional information on the ARRA is available from the Office of Research and Project Administration.