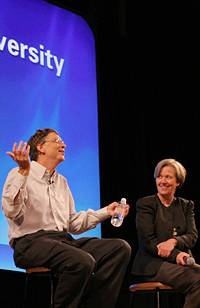 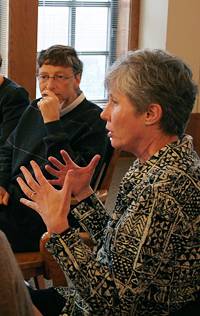 Earlier in the day, Gates met with Maria Klawe (right), dean of the School of Engineering and Applied Science, and faculty members from the Department of Computer Science to learn about Princeton's efforts in developing innovative opportunities for students interested in studying computer science and engineering. At left: Gates spoke to an audience of some 800 people in Richardson Auditorium. Below left: Following his address, Gates was presented with the Crystal Tiger Award, given by Princeton undergraduates to an individual who has had a transformative impact on the world. Students who are members of the selection committee gathered on stage for the presentation.

Gates spoke to an audience of roughly 800 people in Richardson Auditorium as part of a college tour to share his views on new frontiers in technology. While at Princeton, Gates received the Crystal Tiger Award from students for his achievements in business and philanthropy. He also met with Princeton faculty members to discuss innovations in computer science education.

"It's really young people coming into this field, who look at things in a new way or are willing to innovate and drive the breakthroughs, who will be at the forefront of making this happen. The time frame right now is the golden age," said Gates, who serves as Microsoft's chairman and chief software architect.

"There are great dreams about what software can do, and the pace of the field will be determined by fresh young minds -- people who have innovative ways of doing these things," he added.

Gates, who was of college age when he co-founded Microsoft with Paul Allen, said they envisioned developing software that would make it easier for people to use personal computers at work and at home, with a greater ability to connect with others around the world. 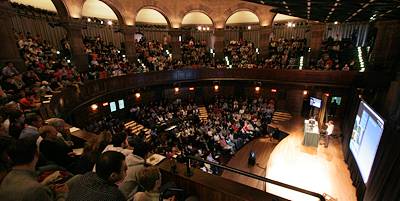 During his address, Gates offered demonstrations of several new Microsoft technologies and provided an overview of the company's development efforts in areas such as Internet searching and automated language translation software.

In a question-and-answer session with students, he commented on a broad range of subjects including education, copyright issues and civil liberties. He emphasized the importance of promoting education and tackling issues of poverty, infrastructure and health in developing countries and stressed the need to address the societal impact of technology advances.

"It's very important that this discussion about what technology is going to do be broadly known, so that it's not just the engineers deciding how we will apply these things," Gates said.

"I do think that in the past some advances have not been used in the way they should -- for example, medical technology has not been focused on the diseases of developing countries in the right way -- and I hope we don't make other mistakes like that," he said. "Also, there are going to be huge issues about privacy, how jobs are done, digital rights management, intellectual property -- we want to get the broad society into the discussion."

Following his address, senior Sarah Moore, a chemical engineering major, said, "I was really impressed with some of the new technology that Bill Gates presented. He was forward-thinking and brought up how he wanted to get technology out to everyone, not just to the privileged.

"The message that made me think, as a student in engineering, is how we can not just make technology, but improve technology that will help people in society as a whole," she added. "We need to think about the problems he raised, such as world health and sanitation -- not just the problems that are cool and fun -- and how we are going to really help people."

Maria Klawe, dean of the School of Engineering and Applied Science, added, "He really managed to convey how much there still is to happen with the impact of technology on society and how important software and computer science is going to be in terms of really changing how we work and how we live."

In addition to his work with Microsoft, Gates established the Bill and Melinda Gates Foundation, which has committed billions of dollars to organizations working in global health and education. The foundation also established the Gates Millennium Scholars program, which provides scholarships to undergraduate and graduate students from minority backgrounds.

For these efforts, Gates was presented with the second Crystal Tiger Award, given by Princeton undergraduates to an individual who has had a transformative impact on the world. Former U.S. Secretary of State Colin Powell received the inaugural award in February 2004.

"Though you are widely respected and hailed around the world, Mr. Gates, it is in particular our generation of students who identify with and admire you," senior Thomas Voute, the Crystal Tiger Award student coordinator, said in presenting the award. "Throughout the last two decades we have witnessed firsthand the major advances in technology that altered every aspect of our lives. Your success is not simply that of the innovator and businessman, but also leader in the global community."

In introducing Gates' address, Princeton President Shirley M. Tilghman said, "We welcome not only an outstanding software architect and entrepreneur, but also someone who, through actions both locally and globally, is striving to make the world a better place for everyone."

Earlier in the day, Gates met with faculty members from the Department of Computer Science, Klawe and Tilghman to learn about Princeton's efforts in developing innovative opportunities for students interested in studying computer science and engineering.

"He was really excited about the interdisciplinary approaches we are taking, particularly our emphasis at the freshman and sophomore levels," Klawe said. "He was very engaged and really seemed to be very interested in what we were talking about."

A Webcast of the address will be available on Princeton's Webmedia site.