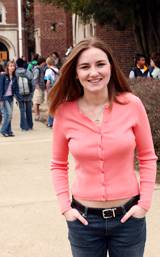 Spencer Compton studied an alternative method for dealing with juvenile offenders for her senior thesis project.

Working last summer in the public defender’s office in her hometown of Charleston, S.C., Spencer Compton was disturbed by the treadmill of drug-related cases she witnessed in the criminal justice system. That motivated Compton to pursue a unique senior thesis project incorporating her passion for justice with her work as a religion major.

“It was a frustrating experience to see these men come through with clear drug addictions, but nothing seemed to be addressing the cause of the problem,” she said. “It’s a revolving door — until you address that problem, they’re going to keep coming through.”

Combining research with field work at a Pennsylvania school for juvenile delinquents, she focused her thesis on the practice of “restorative justice,” an alternative method of dealing with crimes that involves mediation between offenders and victims and seeks to solve the root causes of illegal behavior.

Compton worked with the University’s Community-Based Learning Initiative, which incorporates community projects into courses, to find a nearby school and treatment center for juvenile offenders. In eastern Pennsylvania, the Community Service Foundation, in conjunction with Buxmont Academy, runs several schools that practice restorative justice with teenagers who have mostly been involved in drug- and alcohol-related offenses. Compton spent two days talking with and observing teenagers at one of those schools to see how the theory worked in practice.

“In our department we tend to be divided a bit methodologically between the historians and those who address more contemporary questions. It’s terrific to see a student like Spencer crossing those concerns and using her training to come up with a quite fascinating analysis that has contemporary relevance,” Griffith said. “She put in tremendous amounts of time and energy doing interviews and balancing that with a great deal of research on theories of punishment and how this can really have an impact on the American criminal justice system.”

In her thesis, Compton notes that while the restorative justice concept requires offenders to be held accountable for their actions, it “moves beyond punishment and division to provide guidelines for healing and restoration to the victim, increased understanding of consequences for the offender and wholeness for the affected community.”

Common examples are victim-offender mediation programs, which give “interested victims the opportunity to meet their offenders in a safe and structured setting.” Most involve juvenile offenders, typically in cases such as property crime and minor assault. Restorative justice programs are primarily developed by community- or religious-based programs, but have received support from some state and federal agencies.

Through her research and her field work, Compton feels restorative justice works best with young offenders. “It seems to be most effective in lowering recidivism rates when you approach juveniles who have so much to learn and let them know how important community and relationships with the people around them are,” she said.

In her school visits, Compton observed how the students “continued to engage in restorative justice throughout daily conflicts.” She said the students worked hard to abide by standards of conduct agreed upon by the group and to resolve conflicts on their own.

Describing one incident in which a student who vandalized a bus on a field trip would not admit his actions, she noted that the teenagers were “quick to speak to each other about feeling personally disrespected because a student has violated a group norm. It’s very empowering because the students are responsible for one another — the counselors step in secondarily. The students themselves say, ‘I don’t think your behavior was appropriate, how are you going to repair this?’ and the offending student has to come up with a way to repair it.”

“You can tell they are really blossoming in this environment where they know there are people who care about their well-being. They know those counselors believe in their potential to achieve in life,” she said.

Compton, who organized a conference on criminal justice reform this spring with the Princeton Justice Project student organization, plans to eventually attend law school and focus on public interest law and youth advocacy issues. She said she appreciated the opportunity to develop a senior thesis through CBLI and the religion department that enabled her to engage her interests in other areas, such as sociology and politics.

“I felt like I was doing work that really mattered and that was tangibly important to a group of people. To me, that was the most exciting thing in the world,” she said.