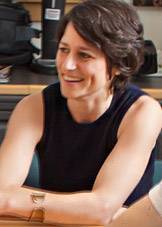 Elizabeth Paluck, an assistant professor of psychology and public affairs, is pursuing research in New Jersey middle schools and Nigerian markets as she explores how peoples' actions are affected by what they sense about the beliefs of those around them.

Students in middle schools across New Jersey are embarking on a new academic year, taking on fresh challenges in the classroom while finding their place in the social fabric of their school.

More than 5,000 miles away, a Nigerian production company is making a movie that will be the latest offering from the popular Nollywood film industry. By January, tens of thousands of DVD copies of the movie will appear in Nigerian local markets, casting a spotlight on the nation's contemporary culture.

From her office in Green Hall on the Princeton campus, Elizabeth Paluck, an assistant professor of psychology and public affairs, is focusing on these disparate settings as the latest sites of her research in exploring how peoples' actions are affected by what they sense about the beliefs of those around them.

Paluck is asking important questions involving social dynamics: Can ideas shared by researchers with a few students filter through their social network and make conflict less acceptable throughout a school? Can a movie about societal relationships change the way people feel about reporting government corruption?

"The uniting idea of my work is that our behavior is often driven by our perceptions of social standards and [what we interpret about] our peers' beliefs or actions," said Paluck. "Media is one way we find out about social standards and direct observation of peers is another. I'm interested in all the different ways we learn about these [social] norms." 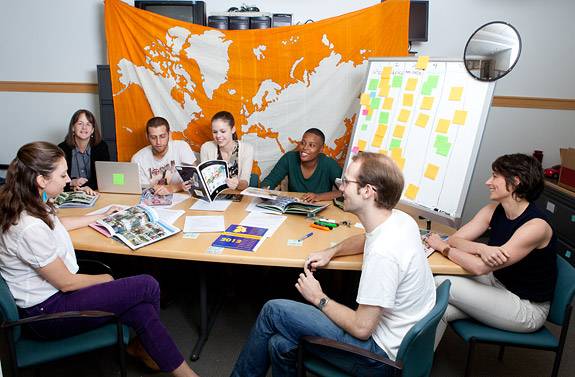 Paluck, who joined the Princeton faculty in 2009, earned her Ph.D. from Yale University in 2007 in social psychology, which focuses on understanding individual behavior in a social context. At Princeton, she has taught undergraduate and graduate classes on the psychology of social change, as well as how psychology can inform policy analysis and implementation.

Paluck says her work is motivated by the idea that social psychology theory can offer useful tools for changing society in constructive ways. One important way to develop and assess this theory is to study attempts to change society, which is why Paluck puts those ideas to the test in her large-scale field research.

Paluck's dissertation, for example, was based on a yearlong field experiment in post-genocide Rwanda that examined the use of a radio drama to encourage Rwandans to express dissent and not blindly obey direction from authorities. That research found that the radio program did little to change listeners' personal beliefs but still made them more likely to raise dissent and less likely to defer to local officials when addressing problems where they lived — results that point to the significance of social norms in shaping a person's actions.

In another research project, Paluck used specially edited versions of a Spanish-language soap opera, "Más Sabe El Diablo," (The Devil Knows More), to test whether a storyline that offered positive views of the U.S. census could encourage U.S. Latinos to participate in the 2010 count. That research found that viewing scenes that were supportive of the census led to viewers expressing more favorable attitudes toward it.

Such real-world experiments are a hallmark of Paluck's work, said Deborah Prentice, Princeton's Alexander Stewart 1886 Professor of Psychology and Public Affairs and chair of the Department of Psychology.

"Betsy takes up fundamental questions about the psychological processes that underlie social change, questions that cannot be addressed in the laboratory, and pursues them in real-world settings," Prentice said. "The fact that she is able to collect data in these settings that enable her to speak to what's going on in people's heads is what distinguishes her as a researcher."

Getting a read on the social fabric of New Jersey schools

This academic year, Paluck and her research team are focusing on 60 New Jersey middle schools to explore the social norms that allow conflict — including harassment, bullying and disrespect — to become a major part of a school's culture. To understand the social dynamics of each school, Paluck and her team will survey more than 25,000 students and create a map that attempts to show where every student fits in a school's social network.

"We're interested in those students because we think one of the ways people figure out the culture of a setting is by watching these very well-connected people and their behavior," Paluck said.

Some of those influential students will be invited to participate in a training program that will encourage them to help develop and put into action tools to reduce conflict in their school. These students will help launch an online and face-to-face campaign about acceptance of differences, tolerance and walking away from conflict without shame. They will also be given a variety of challenges that involve different ways to influence views about conflict.

"Essentially what we're trying to get these students to do is to make it cool to not use conflict as a way to gain or maintain status," Paluck said.

Three surveys taken through the school year will help the researchers measure how the training program has affected the students' perceptions of conflict as an acceptable, or even desirable, part of the school culture.

"We'll be able to follow these students, their friends, their friends' friends to watch the diffusion of these ideas across the social network," Paluck said.

Six research associates are working on the project with Paluck and Hana Shepherd, a postdoctoral research associate at Princeton's Woodrow Wilson School of Public and International Affairs. In addition, at least five Princeton undergraduates will be hired as research assistants. One likely task for the undergraduates: collecting and studying yearbooks from each of the schools included in the project, which Paluck said are a rich source for information about the culture of each school.

"I think the [undergraduates] can get very excited about these kinds of projects, especially when they relate to real-world policy issues," Paluck said. "In this case, I imagine they may also have some recent memories of things that happened in high school and middle school that could inform our work."

At the end of the year, all the participating schools will be offered training to continue the conflict-reduction program. The project is funded by an award from the William T. Grant Foundation, the Spencer Foundation, the Canadian Institute for Advanced Research and the Educational Research Section at Princeton.

Shepherd said she has learned valuable skills from her collaboration with Paluck on the current project and an earlier pilot program in a Connecticut high school.

"Betsy has so much experience running field experiments that it has been an amazing opportunity for me to be able to learn how large-scale projects work in a totally hands-on way with her," Shepherd said. "This is an enormous project. Surveying 25,000 students three times during the year, in addition to running an intervention program, is a huge undertaking both intellectually and logistically."

"For years, the field of social psychology has assumed that the way to change social norms is to target the most socially connected people, and then allow the change to diffuse through the group," Prentice said. "That makes good sense, but does social change really work that way? Nobody has bothered to put the assumption to a rigorous test, mainly because it is very difficult to do so.

"Testing that assumption requires a wide range of methodological and statistical skills, considerable resources, strong organizational abilities, and many, many months of hard work. And, of course, there is no guarantee of success; the assumption might prove to be wrong. Very few researchers, at any career stage, are prepared to take on such an ambitious project. That is Betsy's signature."

Paluck's other current major research in social dynamics presents many challenges of its own. Nigeria is awash in cash from oil and natural gas production, but living standards of average Nigerians are lower than those of people in comparable developing countries. According to Paluck, a big part of the problem is government corruption, but Nigerians in general are reluctant to report such wrongdoing.

Paluck is interested to test whether popular media can change how people perceive the acceptability of reporting corruption. She and her colleagues, including Princeton graduate students Rebecca Littman, in psychology, and Graeme Blair, in politics, are working with a Nollywood company on a film that will be released in two versions: one will include scenes of people speaking out against government corruption and reporting it, while the other won't include those scenes.

The different versions of the movie will be distributed randomly to village markets across southern Nigeria. While the movie is being produced specifically for use in the research, Paluck said it will match the production value of other Nollywood films and is being made by top Nollywood directors and scriptwriters.

"We learn about social standards by consuming this kind of popular entertainment," Paluck said. "Our guards are down. We don't feel like we're being preached at. We just feel that we're observing members of our society and we're learning about their stories and their backgrounds and their actions. That's how we learn about our peers' ideas and social standards."

Community members in rural and urban areas of Southern Nigeria will be surveyed before and after the release of the movie, to measure whether their views have changed about whether it is appropriate to report corruption. Some viewers of the movie that includes the anti-corruption scenes will also be shown a phone number they can use to send text messages about government corruption to a well-known anti-corruption group, Paluck said. Data about how that tool is used will help paint the picture of the film's impact.

Back on campus, Paluck shares the lessons from her far-flung research with students in a variety of ways. Along with her teaching, she speaks regularly with student groups involved in research and works closely with undergraduates who are writing their junior papers and senior theses on topics in her field.

"I really want this tradition to continue in psychology of engagement with real-world projects and evaluation of how psychological ideas play out in a very pragmatic kind of way," Paluck said.