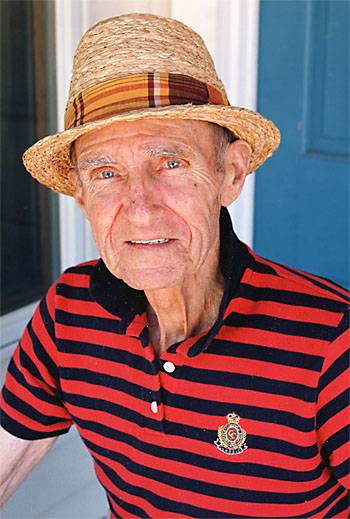 Horton Marlais Davies, a distinguished authority on the history of Christianity, died May 11 at his home in Princeton. He was 89.

The Henry W. Putnam Professor of Religion Emeritus, Davies served on the Princeton faculty from 1956 until 1984. He was the author of more than 30 books, including "Worship and Theology in England," a five-volume work published by Princeton University Press in the 1960s and 1970s.

Davies, a native of South Wales, earned his bachelor's and master's degrees from the University of Edinburgh and his D.Phil. from Oxford University. From 1942 to 1945, he was minister of the Wallington Congregational Church in South London, an area known as "bomb alley" for the heavy pounding it received from German rockets. In 1945-46, he was director of education for the British YMCA with the British Army of the Rhine, supervising 55 recreational and study centers in Germany, Belgium, France and the Netherlands.

Davies joined the faculty at Rhodes University in Grahamstown, South Africa, in 1947, and served as dean of the faculty of divinity there from 1951 to 1953. He earned his doctor of divinity degree from the University of South Africa in 1951. He returned to Oxford in 1953 as head of the Department of Church History at the university's Mansfield College.

Davies came to Princeton to help inaugurate a broad new program of graduate study in religion that had been established in 1955. "His teaching interests ranged widely through arts and literature while his scholarship centered in the history of worship and religious practice," said John Wilson, the Agate Brown and George Collord Professor of Religion Emeritus. "Generations of undergraduates and graduate students, as well as his colleagues, treasured his insights and his wit."

Guggenheim Memorial Foundation Fellowships in 1960 and 1965 and a Huntington Library Award in 1968 enabled Davies to further his writing of "Worship and Theology in England." He received a doctor of letters in 1970 from Oxford based on the first three volumes of the work, which traced the history of Protestant and Catholic theology, worship and religious art and music from the Reformation to modern times. A sixth volume was later added to the set, which was re-edited by Eerdmans Publishing into a three-volume paperback in 1996.

His other books include "Christian Deviations," which was published in the United States as "The Battle of the Sects," "Mirror of the Ministry in Modern Novels" and "Like Angels From a Cloud: The English Metaphysical Preachers, 1588-1645." In 1993, his autobiography, "A Church Historian's Odyssey: A Memoir," was published. He also co-wrote "Sacred Art in a Secular Century" with his son Hugh Davies, who earned his A.B., M.F.A. and Ph.D. degrees in art and archaeology from Princeton and is now director of the Museum of Contemporary Art San Diego in California.

"My father loved Princeton deeply as it was both his home and his profession for 50 years," Hugh Davies said. "He was enormously proud of the University's high standards and of the caliber of the faculty and students. I would often tease him by saying he must be jealous that he wasn't an alum himself, and he would just smile."

In addition to teaching at the University, Davies also led a course every year or so at Princeton Theological Seminary. In 1978, he was one of seven faculty members from New Jersey colleges and universities to help launch a cooperative ecumenical graduate program in liturgical studies at Drew University. He was the recipient of honorary degrees from several institutions.

After retiring from the Princeton faculty, Davies conducted research at the CTI Centre for Textual Studies at Oxford. He also pursued his interest in art by painting floral still lifes, church interiors and exteriors, biblical scenes and landscapes. His paintings and drawings were exhibited in regional galleries.

A memorial service will take place at 2 p.m. Thursday, May 19, at Trinity Church, 33 Mercer St., Princeton. The University's Department of Religion also is planning a service for the fall.

Memorial donations may be made to Trinity Church for its Crisis Ministry or to Habitat for Humanity.

Joseph Williamson to resign as dean of religious life