'In the nation's service' is next stop for salutatorian 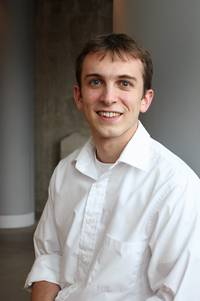 To write his senior thesis on the development of tanks in the U.S. Army, Graham Phillips immersed himself in the study of tank design, deployment and doctrine. That knowledge should come in handy next fall, when he will serve as a member of an Army tank crew.

But first he will fulfill another responsibility: Phillips has been chosen as the class of 2005's salutatorian. He will continue the Princeton tradition of delivering a speech in Latin at Commencement May 31.

"I think now more than ever the Army needs as many qualified and talented people as it can get," said Phillips, who enlisted last October. In July he will report for basic training at the Fort Knox Armor Center in Kentucky.

"I don't know if I'll get sent to Iraq, but I certainly would be willing to go if I did," Phillips said. "I don't agree with all the dimensions of Bush's foreign policy, but regardless, I think it's important that the best people be there doing the best job they can."

Phillips, who grew up in Brookfield, Mass., a town of 3,000, has been interested in the Army for several years. He considered enlisting after he completed high school, but opted instead to come to Princeton, where he chose to major in history. His academic excellence has earned him a ranking of seventh in his class.

He considers studying Latin "good brain exercise. It's almost like solving a puzzle."

Every Monday during his freshman year Phillips was at the microphone at WPRB, the student-run radio station, for his 6 a.m. shift as a disc jockey. "As an incoming freshman I didn't realize how unusual it would be for a college student to get up at 6 in the morning," he said. His show, which lasted two and a half hours, featured classical music. Phillips also participated in the Undergraduate Film Organization as its Webmaster and vice chair.

For his thesis, Phillips wanted to study a topic related to the military. He became intrigued by the way in which American political views influenced tank design and the evolution of tactical doctrine for tanks. His thesis covered tank development from World War II to the Persian Gulf War.

His adviser, Jennifer Weber, who is a lecturer in the history department, was so impressed with his research that she suggested he contact the Army's Military History Center. "I think the center should have his thesis in its collection," she said.

"What makes this young man extraordinary . . . is his maturity and his deep sense of responsibility. Of the many undergraduates I have met at Princeton, I have never met one who so exemplified, at this age, 'Princeton in the nation’s service,'" said Weber, referring to the University's informal motto. "I have no doubt that he will make a superb officer."

Phillips chose the Army because he wanted to pursue some type of service to others after graduation. "I knew it would be challenging in a completely different way than Princeton," he said. His commitment to the military will last three and a half years.

Phillips may decide to become a career military officer, or he may choose to be a high school teacher. "That's something I could imagine myself doing," he said, "probably in a small town like the one I grew up in."