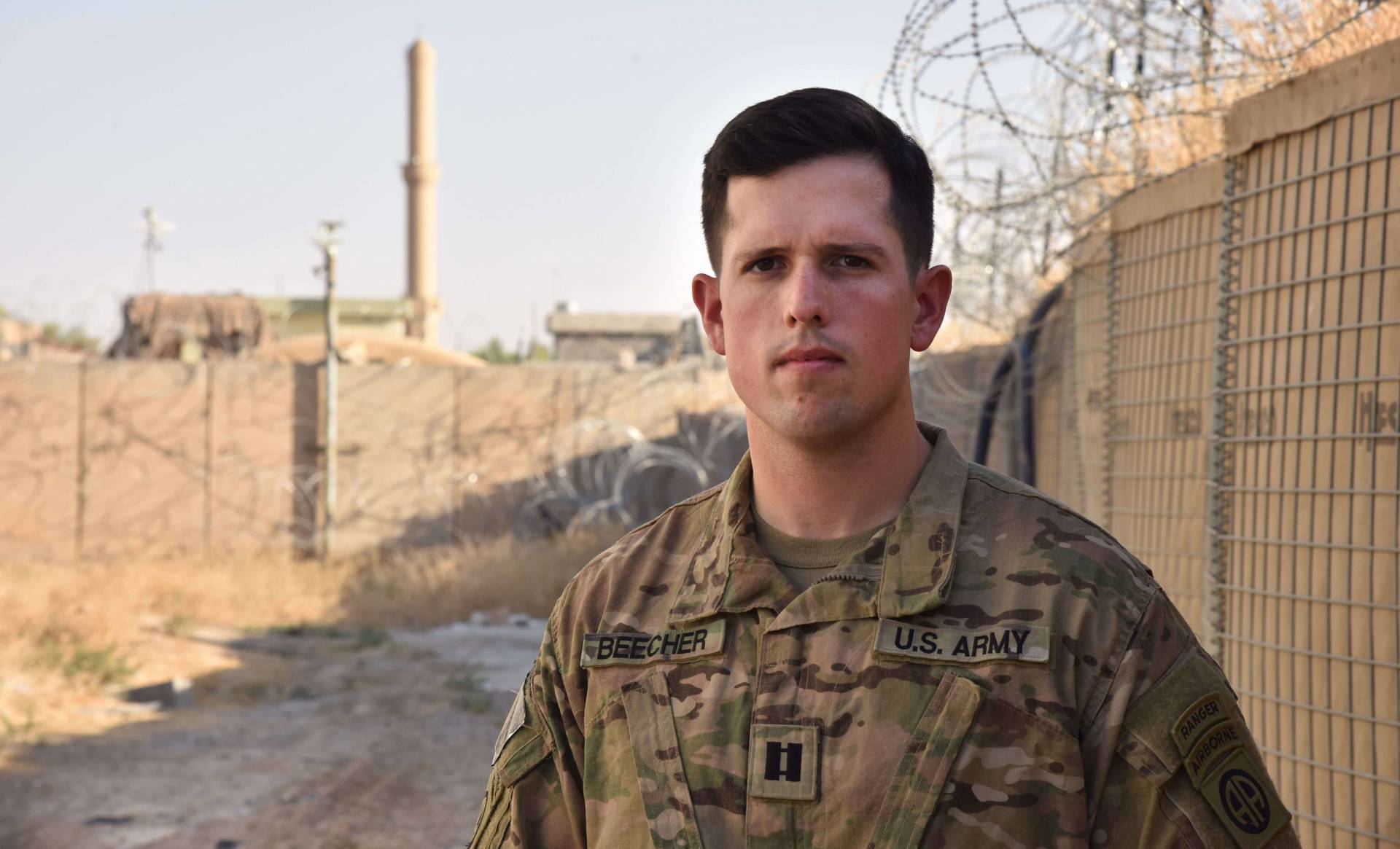 Zachary Beecher, a member of the Class of 2013 who majored in the Woodrow Wilson School of Public and International Affairs and was an ROTC cadet, is a captain in the U.S. Army, stationed in Iraq.

Zachary Beecher is a captain on the 2nd Brigade Combat Team’s staff working for the brigade commander in developing the analysis for the ongoing advise-and-assist mission in Iraq.

For the first six months of his deployment, Beecher served as the logistics advise-and-assist coordinator for 2nd Brigade, 82nd Airborne Division. With his team of logistics advisers, he coordinated efforts with coalition partners including Sweden, New Zealand, Great Britain, Australia, Hungary, Norway, Germany, France and others while working hand-in-hand with the Iraqi Army to provide support and real-time consultations on optimizing logistics operations in support of the five Iraqi Army Divisions (nearly 100,000 Iraqi soldiers) engaged in combat operations to liberate Mosul, Iraq.

At Princeton, Beecher majored in the Woodrow Wilson School of Public and International Affairs and was an ROTC cadet. He was the president of his class for all four years. He currently serves as class vice president and will hold the position until 2018.

In honor of the Fourth of July, Beecher responded to our questions via email from Iraq. A condensed version of this story appears on Princeton's Instagram as part of the #TellUsTigers campaign. 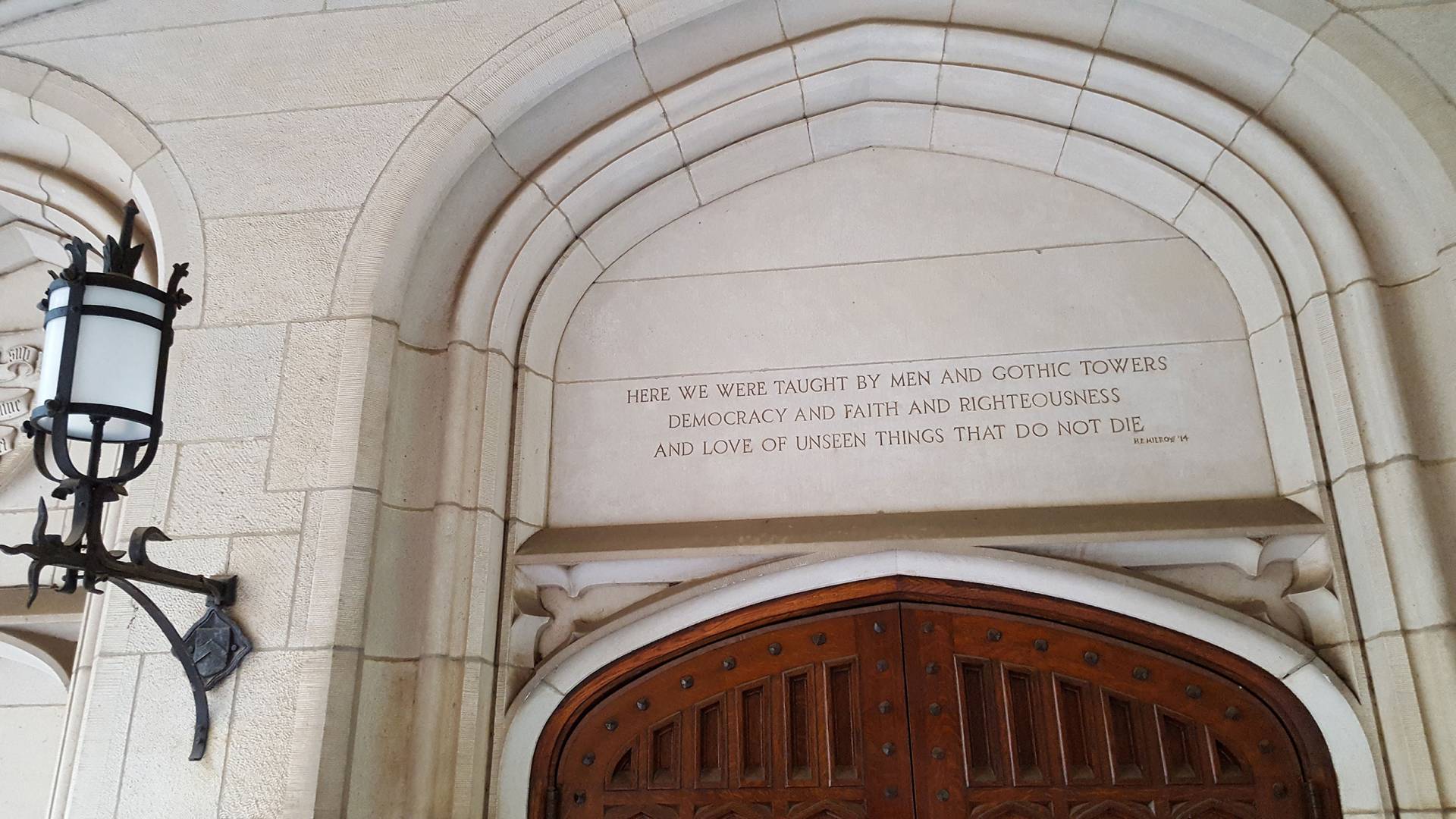 Beecher said he has been inspired by this inscription — written by H. L. Milrow, a member of the Class of 1914 — etched in stone over the entrance to McCosh Hall, Room 50, at Princeton.

What does freedom mean to you?

Freedom is the ability to live a life of one's own choosing, where one can love whom they want, worship whom they choose, be who they want, pursue their passions, maximize their potential and contribute fully to community as their best self without fear of persecution.

What did you learn at Princeton that you carry with you every day as a soldier?

Etched into the stone over the entrance into McCosh 50 is an inscription [excerpted from the poem "Princeton," by Herbert Edward Mierow, a member of the Class of 1914 and graduate Class of 1925] that reads: "Here we were taught by men and Gothic towers, democracy and faith and righteousness and love of unseen things that do not die." Princeton offered me the unparalleled opportunity to broaden my worldview, discover and forge new friendships with folks from near and far, and relentlessly pursue the questions and problem sets that would later become my passions. It was in these classes where I was challenged by my professors and classmates alike to consider new ideas and ponder the implications and meaning of my beliefs.

When I look back on my time at Princeton, I think of those conversations and the multitude of people who not only helped me better understand my studies but better know myself. Being surrounded by so many diverse and exceptional people illuminates your own unique strengths and weaknesses — however, it also showed me what an extraordinary impact an organization can have when it celebrates people's differences, finds strength in differences, and forges a collective path to better understand and then improve our world.

If we all value the importance of "democracy and faith and righteousness," and we see each other as an asset, no matter our background, in the fight to preserve the freedom for all of us to celebrate the "love of unseen things that do not die," there is nothing that can stand in our way. The Army further illuminates this truth every day.

The 82nd Airborne Division is historically known as the "All-American Division." In our ranks, there are representatives of every U.S. state and territory representing every major religion. Each paratrooper swears an oath to uphold and defend the Constitution, standing ready to defend the freedom that I so enjoyed at Princeton against any threat, foreign or domestic. Together, with no mind to what separates them, these paratroopers — men and women of all faiths, backgrounds and sexual orientation — stand ready to jump from an aircraft in flight, to confront and ultimately defeat those who should threaten our freedom and national security. They leap not only into the night sky, but do so fully knowing that this will be only the start of their journey. Whether in training or combat, they know that upon getting to the ground, they will be asked to move further and fight harder, accepting their share and more to accomplish what must be done.

This collective courage found through faith in one another does not solely exist in a C-130 above a drop zone; it is forged by individuals who identify the need and importance of working together — individuals who choose to build shared trust and, in doing so, build faith in one another. Knowing that together they can push one another to do the right thing, the brave thing, to accomplish something greater than any of them could do alone, empowers people to discard doubts and be brave in the face of adversity. From there, with faith in one another and no mind paid to our differences, we soon find that when we stand at the metaphorical door and must decide to be brave for others that we will jump and believe our canopy, too, will open. 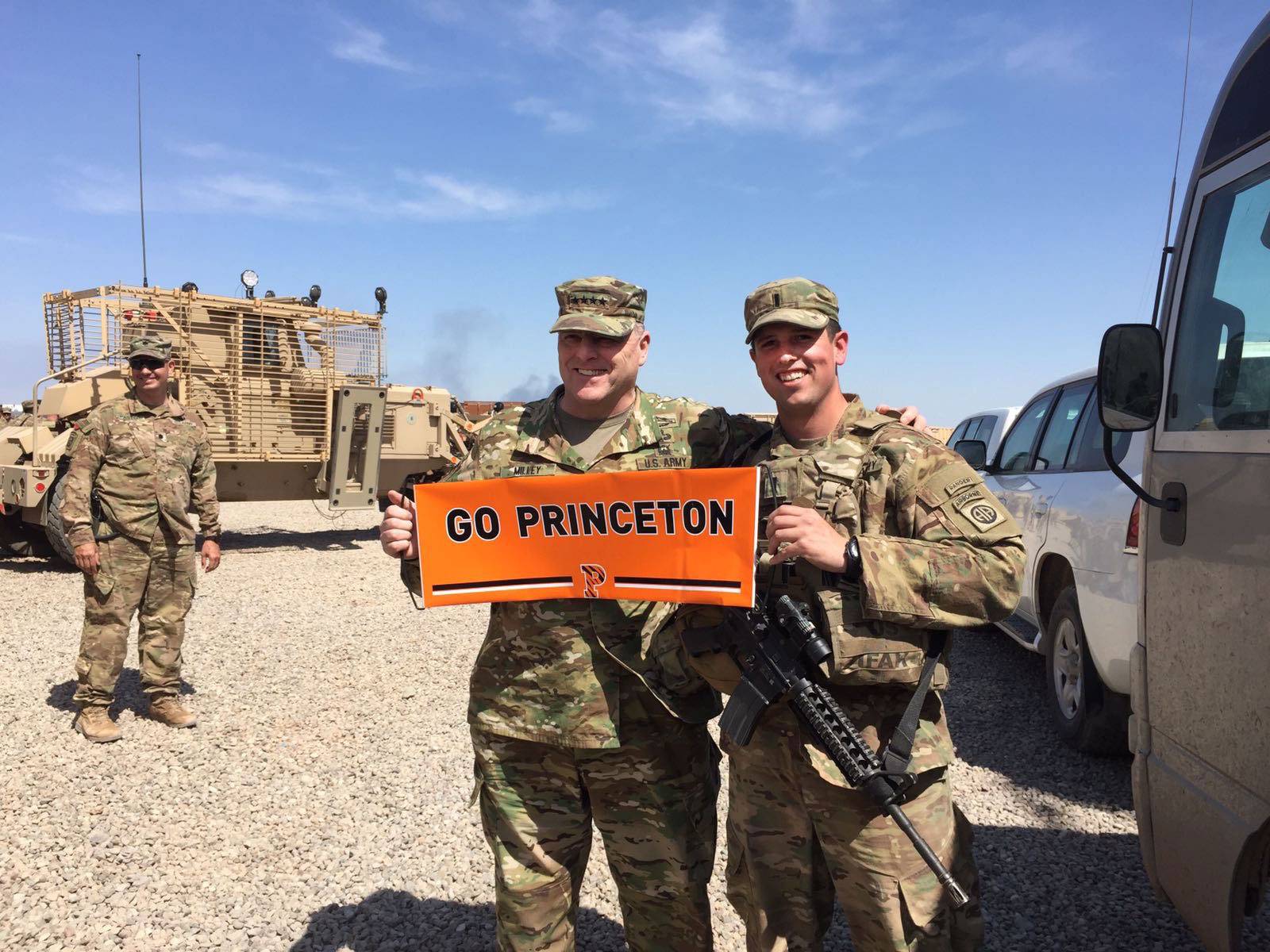 Beecher, right, and Gen. Mark Milley, chief of staff of the U.S. Army and a member of the Class of 1980, met on March 28, at Qayarrah, Iraq, during a battlefield circulation where Milley visited soldiers serving in Operation Inherent Resolve. On Alumni Day in Feb. 2016, Milley received the Woodrow Wilson Award, the University's highest honor for undergraduate alumni.

Is there anything you wish people knew about your experience?

If there's anything I've learned in my time in the Army and my shorter time in Iraq, it is that "winning" wars is hard, unforgiving and difficult work that sometimes must be done. When we consider those words etched above McCosh 50, "democracy and faith and righteousness," it would benefit us all to look to history to see the price that generations before us have paid for our way of life.  At times, the conditions provided little choice but that of arms and war to reassert and defend these essential values. Yet, securing the future of this trinity as well as a stable and just future for those for whom we fight can be even more difficult than the war itself.

Faced with daunting odds, it is easy to harbor doubts. When I wrestle with the length of the road we have to march, I try to remember the kids I've met here in Iraq. It really is  hard to give up on that hope when you see them smiling and laughing with eyes full of hope, though they've lost so much.  We owe it to them and to those paratroopers, soldiers and other public servants we've lost in the pursuit of that future to remain moving ever forward.

What is a recent moment that stands out to you during a tour of duty?

We lost a friend of mine, really of everyone in the Brigade, here on April 29, First Lt. Weston Lee, of Bluffton, Georgia. He was 25 and it was his first deployment; he was eager to serve and play a role in helping Iraq in its fight against ISIS. It was sobering to be personally confronted with the real cost of our efforts here in Iraq. Weston was a great young man and an exceptional leader with unlimited potential. We were all better for having served with Weston.

What was a great act of bravery you have experienced or witnessed during a tour of duty?

There's no one act that stands out — these paratroopers are brave every day. There’s a quiet resiliency and mental toughness in all that they do to keep driving on towards achieving our objectives here and when training back at home station.  In Iraq, we see the bravery daily with paratroopers in executing whatever part of the mission here is their responsibility. Whether it's working hand in hand with their Iraqi counterparts in forward operations areas to help them pursue and defeat ISIS or escorting important material across Northern Iraq to support the fight, each contribution is critical to keeping the fight ever forward. Yet, this bravery is manifest back in training at Fort Bragg as well; each time they conduct airborne operations, jumping forth into dark nights or conducting live fire training, these paratroopers are doing what they must to be prepared for the next fight. These paratroopers remind you that together, any group dedicated to a clear purpose can find strength in one another and accomplish its mission.

What does service mean to you?

I've wanted to join the military since I was much younger. Through my entire life, I've been drawn to a life of service. My grandfather served in Korea as a forward observer (field artilleryman) with the U.S. Marine Corps, rising from the rank of private all the way to staff sergeant. My father has served with the Mt. Olive Township, New Jersey, Police Department for more than 30 years. And for nearly 35 years, my mother has been a leader of the Center for Evaluation and Counseling in Sparta and Parsippany, New Jersey — a nonprofit that provides therapy to victims of child abuse — and related service agencies.

The Army presented me an opportunity to challenge myself, lead others and serve something larger than myself. From my platoon leader time to Ranger School to my deployment, the Army readily presents you with complex challenges that you must think and act decisively upon in order to be successful. Lastly, I have always believed that if we are to have an opinion about putting others in harm's way, we ought to have been willing to put ourselves in harm's way first. 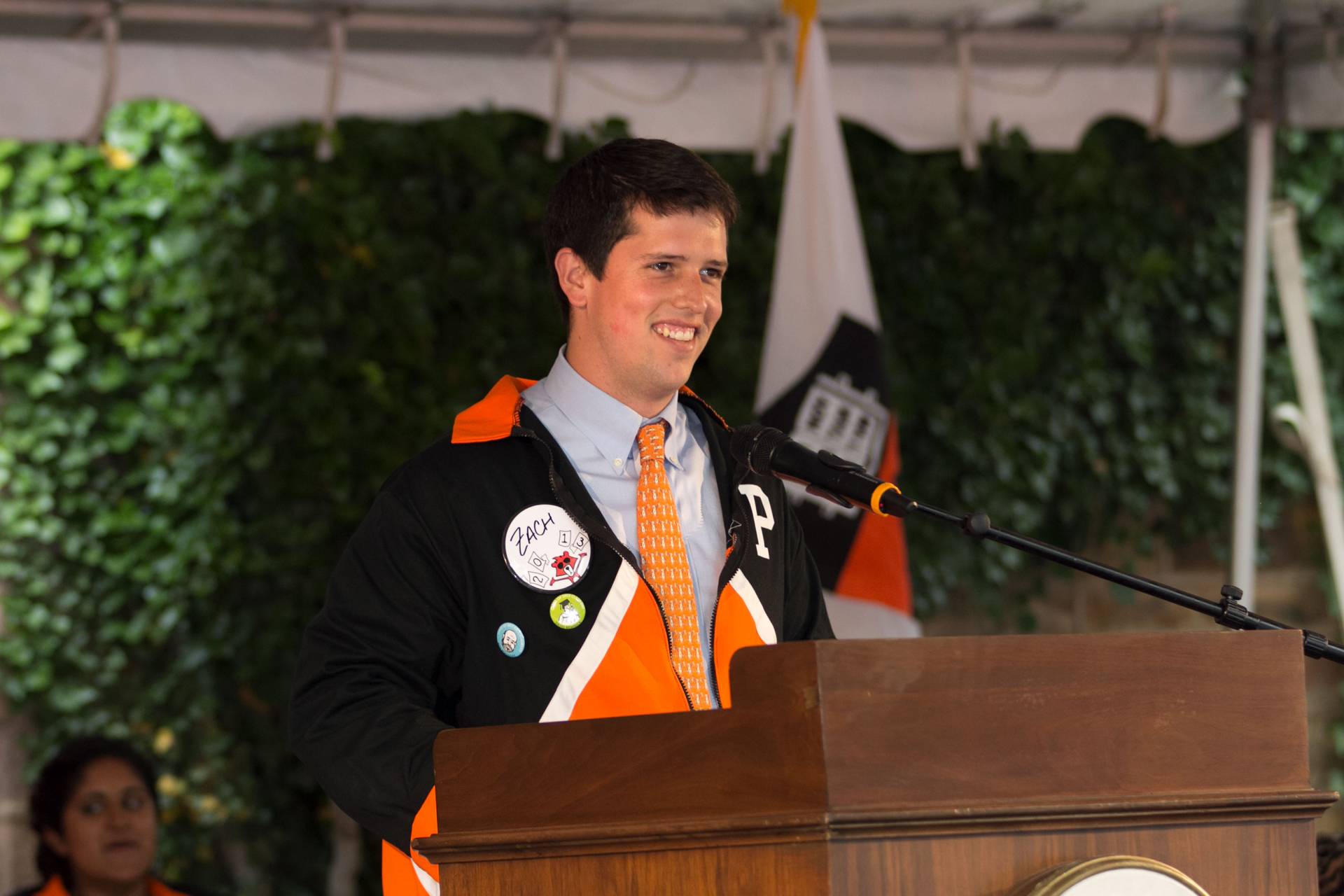 Beecher addresses the crowd at Class Day 2013. He served as class president all four years at Princeton and, as an alumnus, currently holds the position of class vice president.

How did your Princeton experience influence your vision of leadership?

While at Princeton, I had the opportunity to meet and study with a variety of military leaders who shaped the leader I sought to become. Through a friend I met Brigadier Mark Martins, the chief prosecutor for the 9/11 tribunals, who showed me the importance of a diligent work ethic, mastering your subject and the importance of the rule of law in shaping society. I took a seminar with Adm. Michael Mullen [the Charles and Marie Robertson Visiting Professor at the Wilson School, who spent four years as Chairman of the Joint Chiefs of Staff — the top military adviser to Presidents George W. Bush and Barack Obama], who showed me how emphasizing the personal aspect of leadership, building a well-rounded team comprising multiple capabilities and viewpoints, as well as delving deep into the details, make you a better leader. Both men continue to be mentors and exemplify what a life of service ought to look like to young leaders who seek to serve.

In March this year, I met General Mark Milley [a 1980 Princeton alumnus and chief of staff of the U.S. Army], at Qayarrah, Iraq, during a battlefield circulation when he visited soldiers serving in Operation Inherent Resolve. Gen. Milley is an intellectual leader who talks straight to the point and does not mince words. He's refreshing to be around because he tells you where you stand and where we need to go in order to accomplish our mission. Honesty is one of the most important attributes in a leader to aspire to. [At Alumni Day, Feb. 20, 2016, Gen. Milley received the Woodrow Wilson Award, the University’s highest honor for undergraduate alumni.]