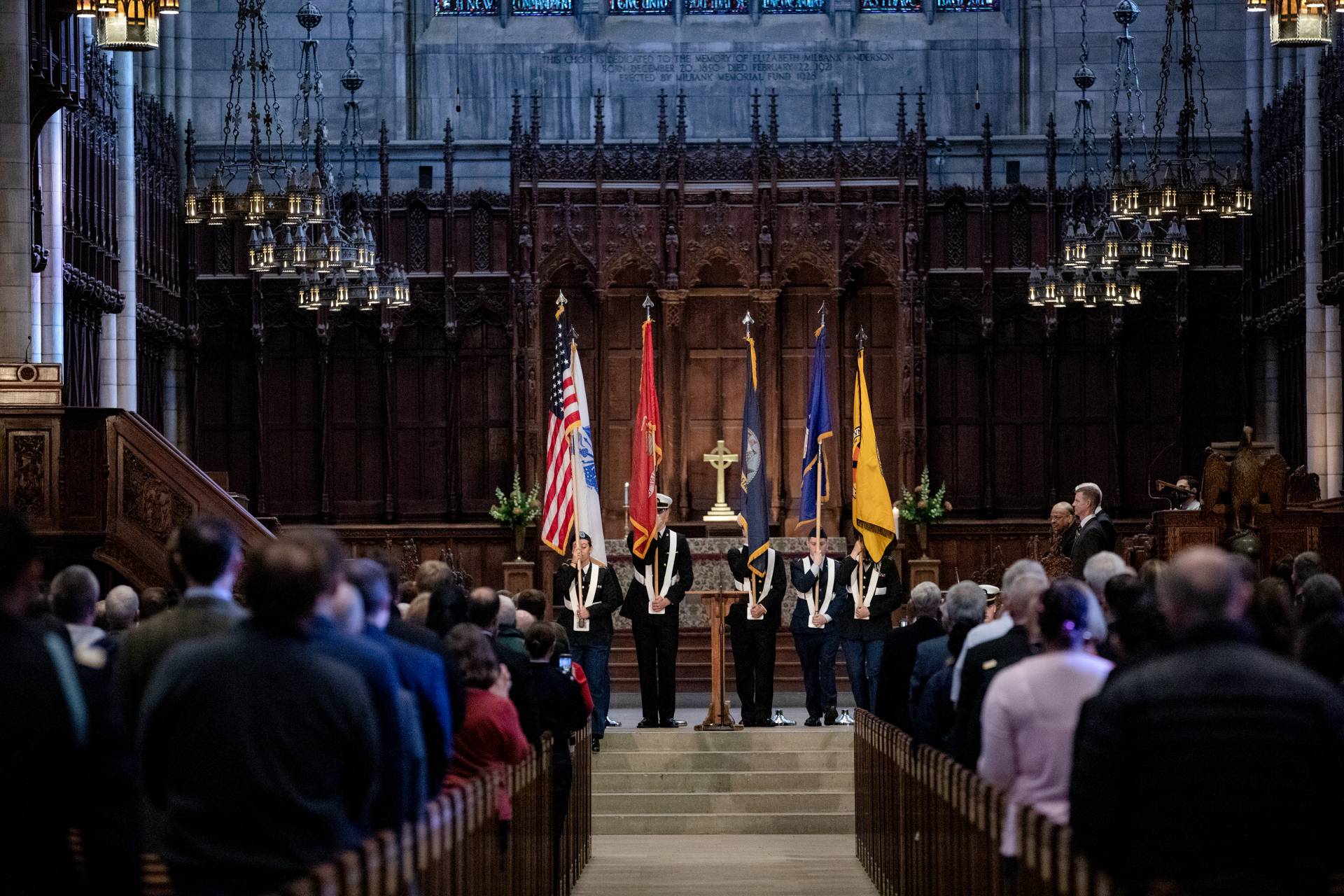 Princeton University marked the 100th anniversary of ROTC on Nov. 11. The day-long event began with the annual Veterans Day service in the University Chapel. Guests came from all over the country and world to attend the centennial event. 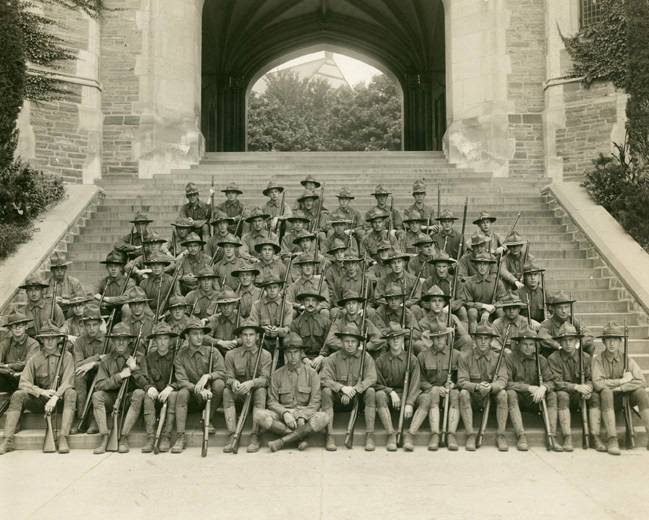 “Princeton’s ROTC programs have trained generations of leaders who have served this country, and who continue to serve this country, with courage, wisdom and integrity, exemplifying the University’s commitment to be ‘in the nation’s service and the service of humanity,’” Princeton President Christopher L. Eisgruber said.

In 1919 following World War I, the U.S. Army established 125 ROTC units, including one at Princeton. The Army ROTC Tiger Battalion has operated at the University since then.

“ROTC training, and the education of military leaders more broadly, are profoundly valuable parts of Princeton’s academic and public service missions,” Eisgruber told ROTC alumni and students seated around tables in the Frick Chemistry Laboratory Atrium. “Princeton’s ROTC programs have embodied … ideals of citizenship and service throughout the last century, and those ideals live vibrantly in the collected experience of you who gather in this room tonight.”

Eisgruber, who helped re-establish Princeton’s Navy ROTC program in 2014, noted a resurged interest in ROTC at Princeton. There are also more veteran students on campus today, many of whom were admitted through the University’s reinstated transfer program for undergraduates.

According to Eisgruber, between 25 to 30 Princeton students were enrolled in ROTC six years ago. This fall, there are 67 ROTC students, including 47 with the Army, 13 with the Navy and 7 with the Air Force. Some of these students shared why they serve in a video that premiered at the anniversary celebration. 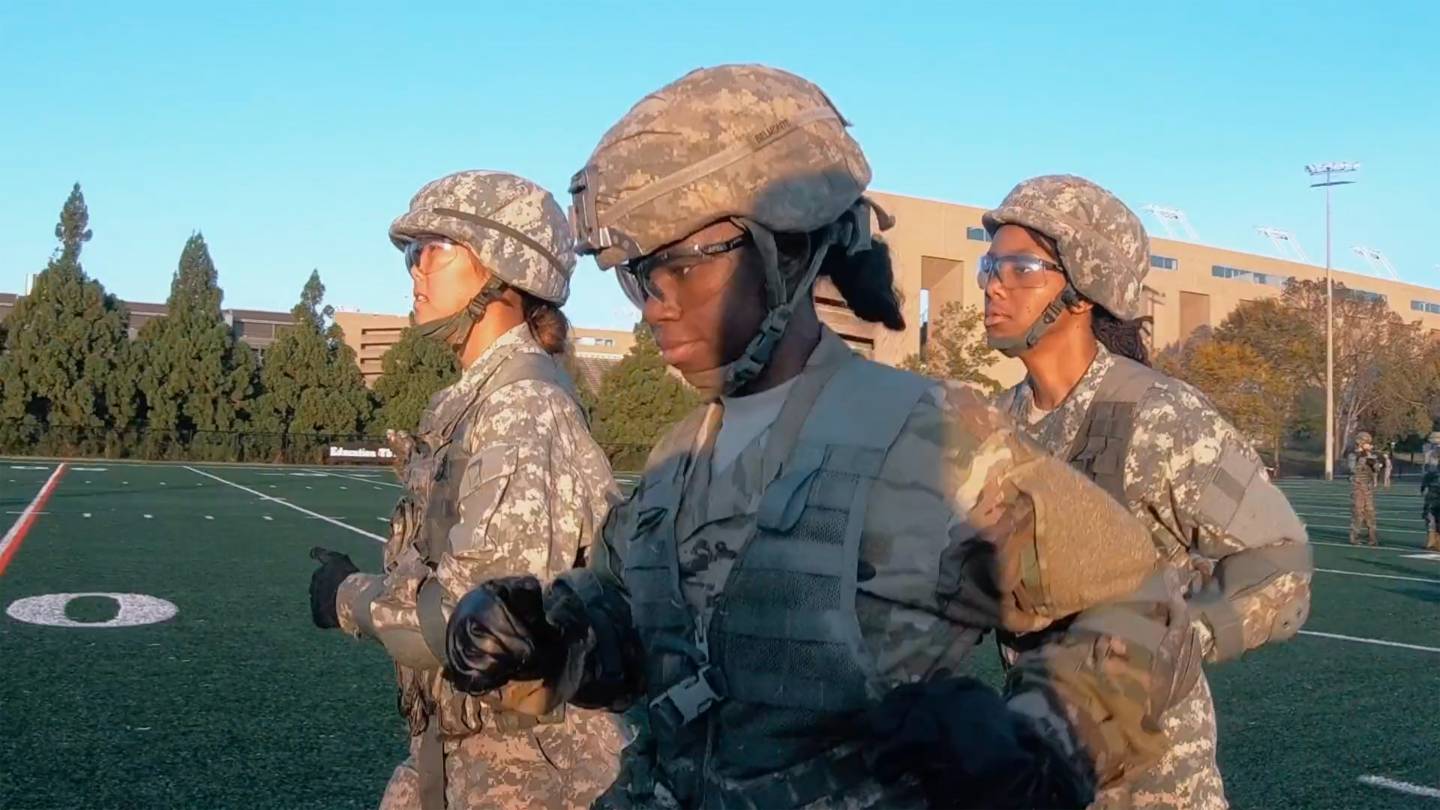 Princeton offers Army, Navy and Air Force ROTC programs. This fall, there are 67 ROTC students, including 47 with the Army, 13 with the Navy and 7 with the Air Force. ROTC students shared why they serve in a video that premiered at the ROTC centennial celebration.

Video by Danielle Alio and Denielle Avila, Office of Communications

“Choosing to serve and having this commitment after school was a big choice, but it was one that I was grateful to take on. That sacrifice is something I’m extremely proud of,” said senior Kasey Bersh, Army ROTC.

“Everyone is here for a common purpose,” said first-year Bradley Rindos, Air Force ROTC. “The shared goal of protecting the country. It doesn’t matter where you come from or what major you are studying. At the end of the day, you all have that common thread that is ‘in the nation’s service and the service of humanity.’” 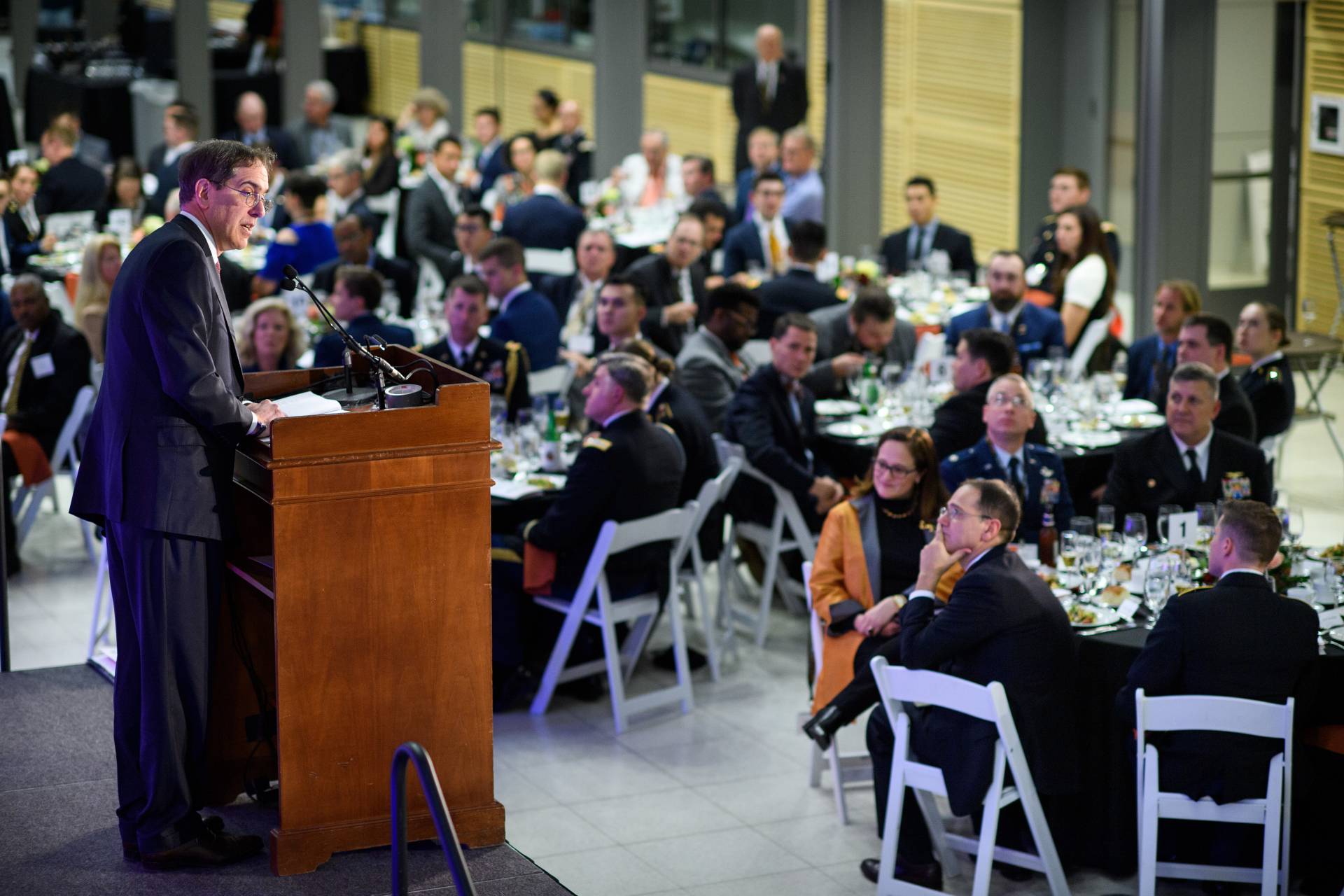 Chairman of the Joint Chiefs of Staff Gen. Mark Milley, a 1980 alumnus who began his military career through Princeton ROTC, also sent his regards via video message.

“Congratulations to the entire University team on a century of Princeton in the nation’s service,” Milley said. “Over the years, this program helped close the gap between Americans serving in uniform and the people we defend, serving as a vehicle of social mobility and advanced education.” 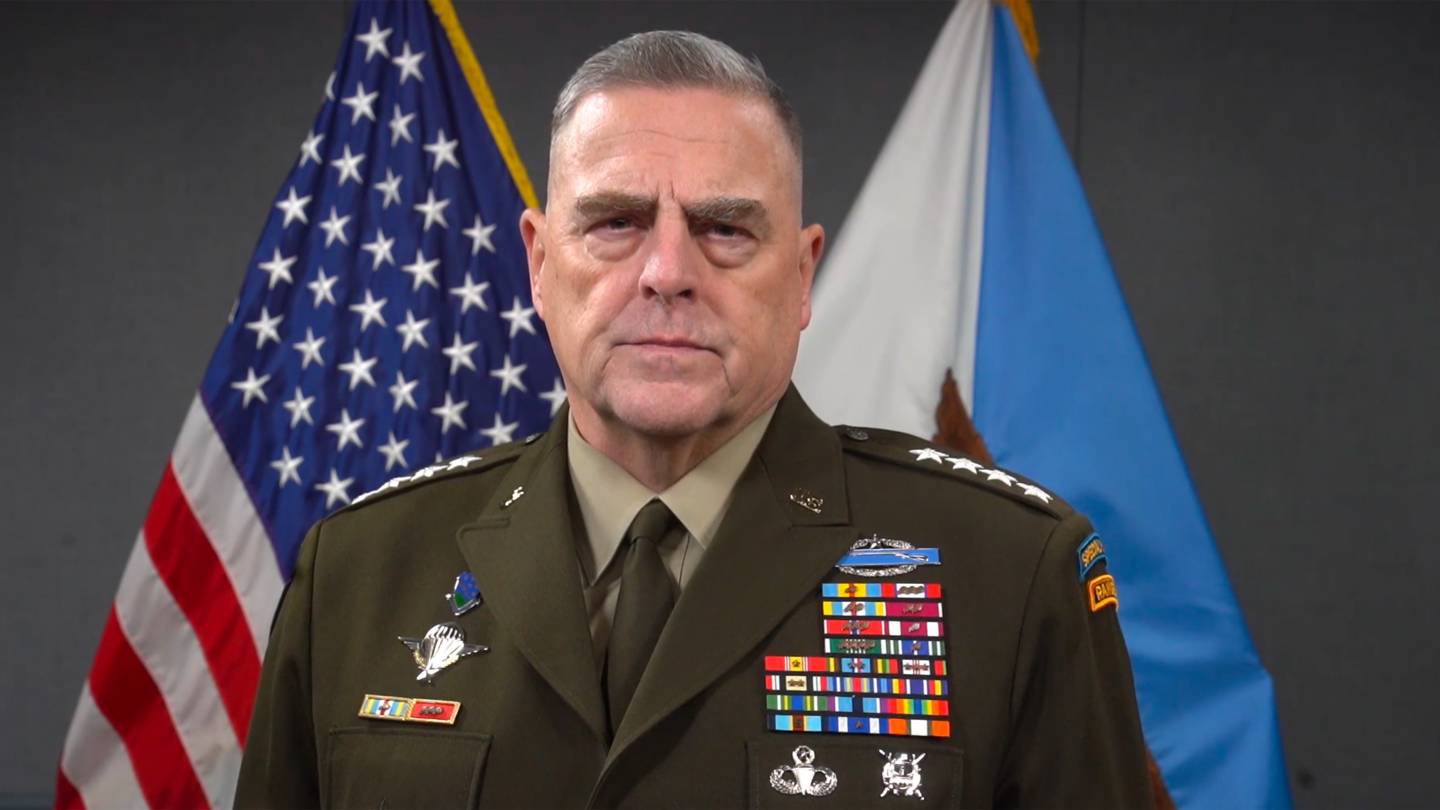 Gen. Mark Milley, chairman of the Joint Chiefs of Staff and a 1980 Princeton alumnus, congratulates Princeton ROTC as the program celebrates its 100th anniversary.

Video courtesy of the Department of Defense

The day-long centennial celebration also featured the annual Veterans Day service in the University Chapel, tours of campus, and a panel discussion on “Deterrence in the Age of Vulnerability” with undergraduate and graduate alumni. Guests had flown to Princeton from all over the country and the world to attend.

Lt. Gen. Christopher Cavoli, a Class of 1987 alumnus and commander of the U.S. Army Europe, gave the keynote address at the closing dinner in Frick Atrium. 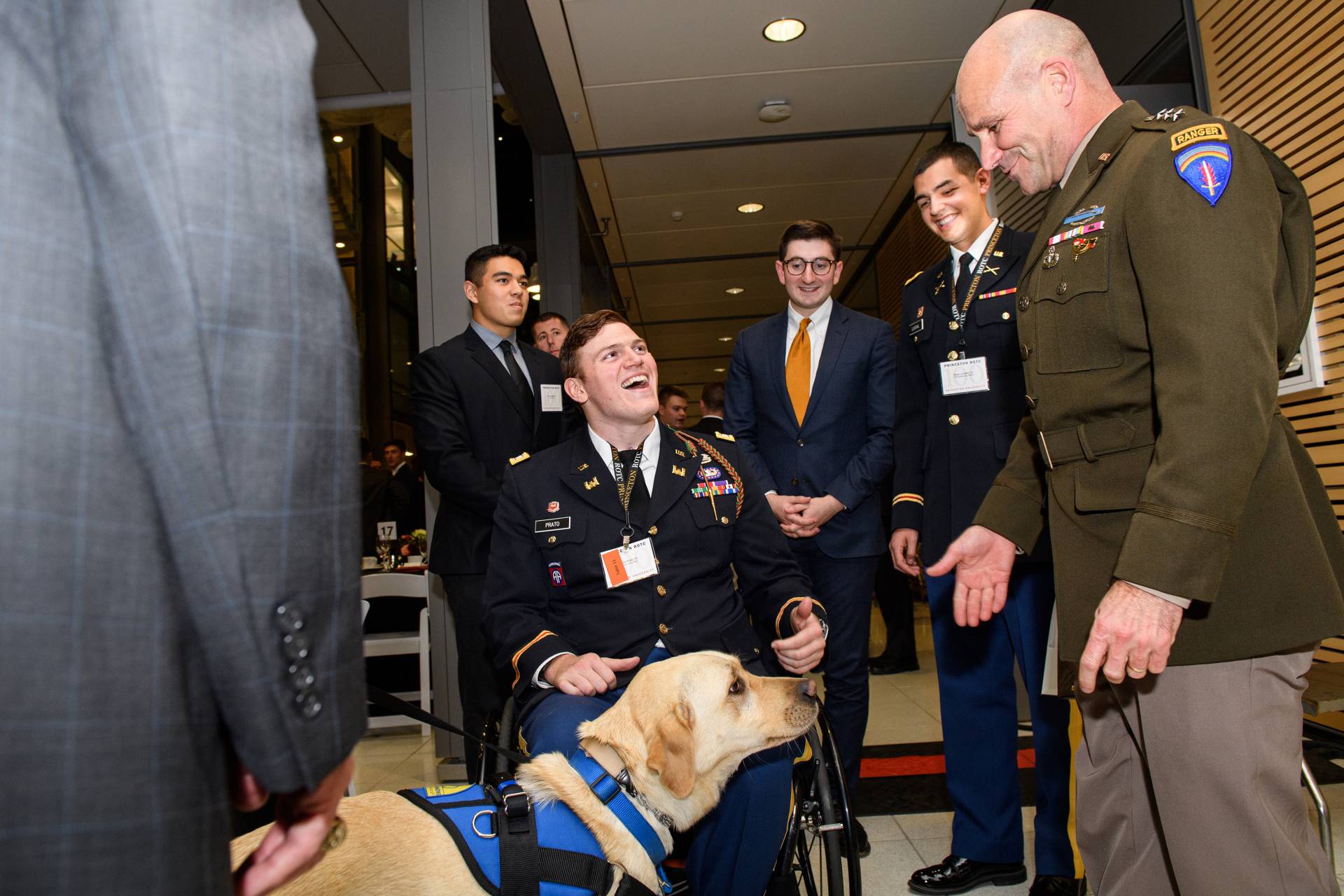 Lt. Gen. Christopher Cavoli (far right), a Class of 1987 alumnus and commander of the U.S. Army Europe, talks with Victor Prato (center). Prato, a Class of 2015 alumnus, received the Purple Heart after suffering a severe spinal cord injury while serving in Kandahar, Afghanistan, in 2017.

“It is my great privilege to serve not only this country, but to serve this country as a representative of Princeton University,” Cavoli said.

He commended ROTC students past and present for exemplifying Princeton’s commitment to service in its many forms.

Cavoli recognized a few of these Princetonians in the audience, including Victor Prato, a Class of 2015 alumnus who received the Purple Heart after suffering a severe spinal cord injury while serving in Kandahar, Afghanistan, in 2017. 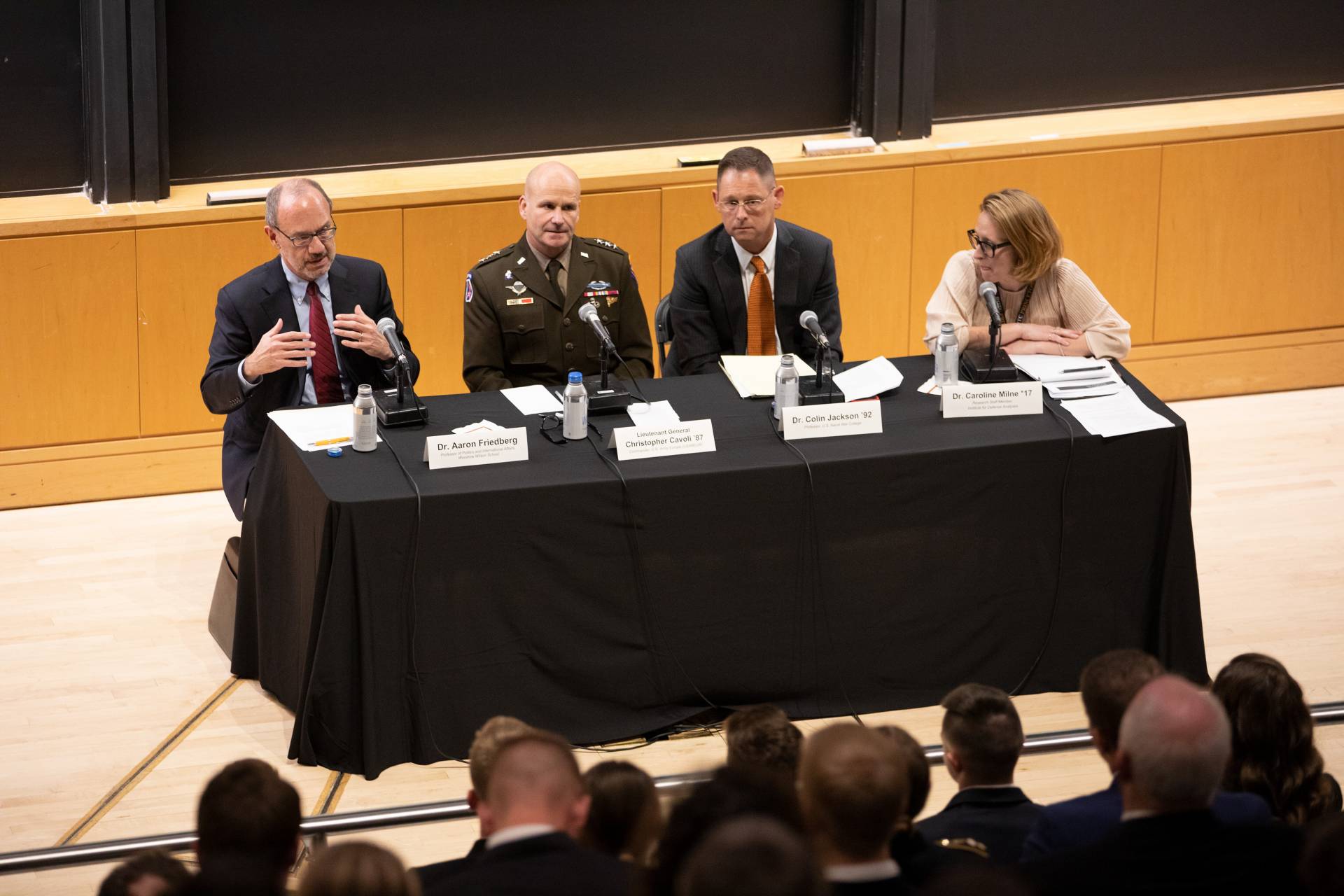 The panel discussion “Deterrence in the Age of Vulnerability” featured from left to right: Aaron Friedberg, professor of politics and international affairs; Lt. Gen. Cavoli; Colin Jackson, Class of 1992 alumnus and professor at the U.S. Naval War College; and Caroline Milne, a graduate 2017 alumna and research staff member at the Institute for Defense Analyses.

Princetonians who gave the ultimate sacrifice were also honored, with a small empty table set for fallen heroes placed in the middle of the atrium.

The evening concluded with a presentation of the ROTC Alumni Service Award for retired Col. Douglas Lovejoy, who previously worked at the University in leadership gifts.

Deputy Dean of the College Elizabeth Colagiuri, an ROTC staff fellow and former member of Naval ROTC, served as master of ceremonies, and the Rev. Theresa Thames, associate dean of religious life and the chapel, gave the invocation during the commemorative dinner. 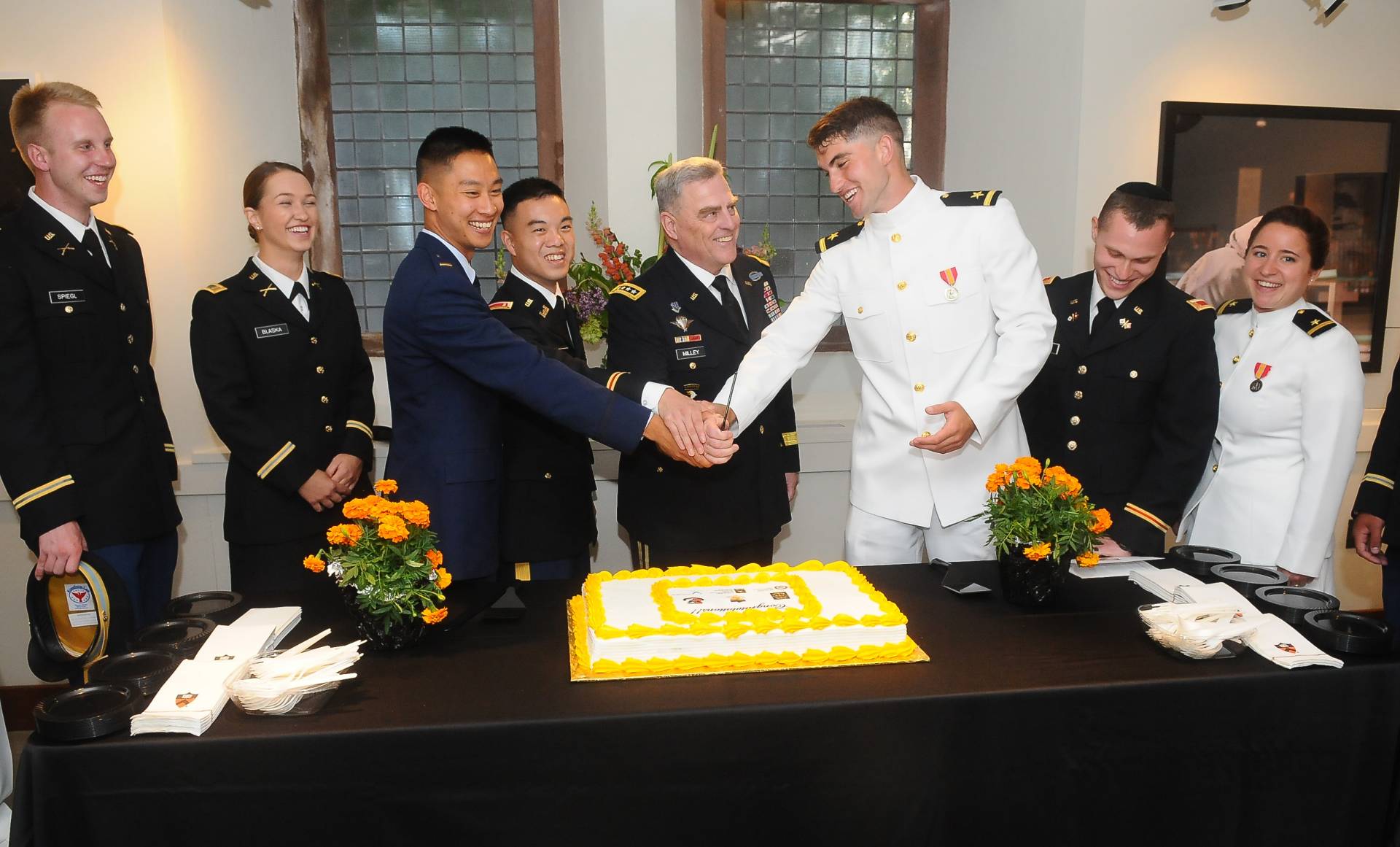 Gen. Milley (center) cuts a cake with Princeton Class of 2019 graduates after the ROTC Commissioning Ceremony last June. The ceremony was the first time since 1972 that Princeton had hosted a tri-service commissioning for officers who had emerged from Army, Air Force and Navy ROTC programs.