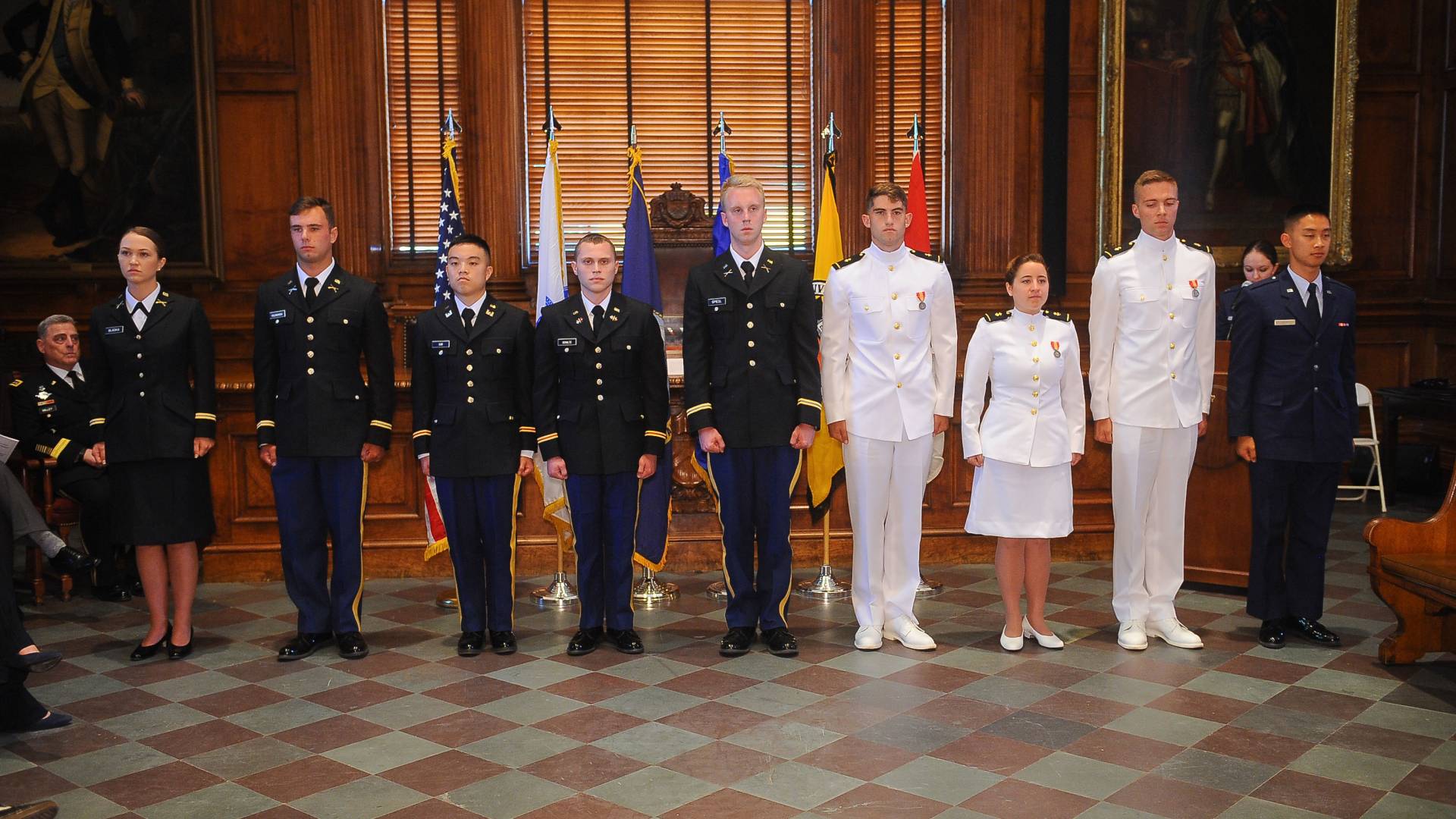 Nine members of Princeton’s Class of 2019 became commissioned officers in the U.S. Army, Air Force and Navy on June 4 during a ceremony led by Army Chief of Staff Gen. Mark Milley, a Class of 1980 graduate who himself was commissioned through Princeton’s ROTC program nearly 40 years ago.

The ROTC Commissioning was held in the Faculty Room of Nassau Hall a few hours after Princeton’s Commencement. For the first time since 1972, Princeton hosted a tri-service ceremony that commissioned new officers who emerged from Army, Air Force and Navy ROTC programs. This year also marks the 100thyear since the establishment of Princeton’s Army ROTC Tiger Battalion in 1919. 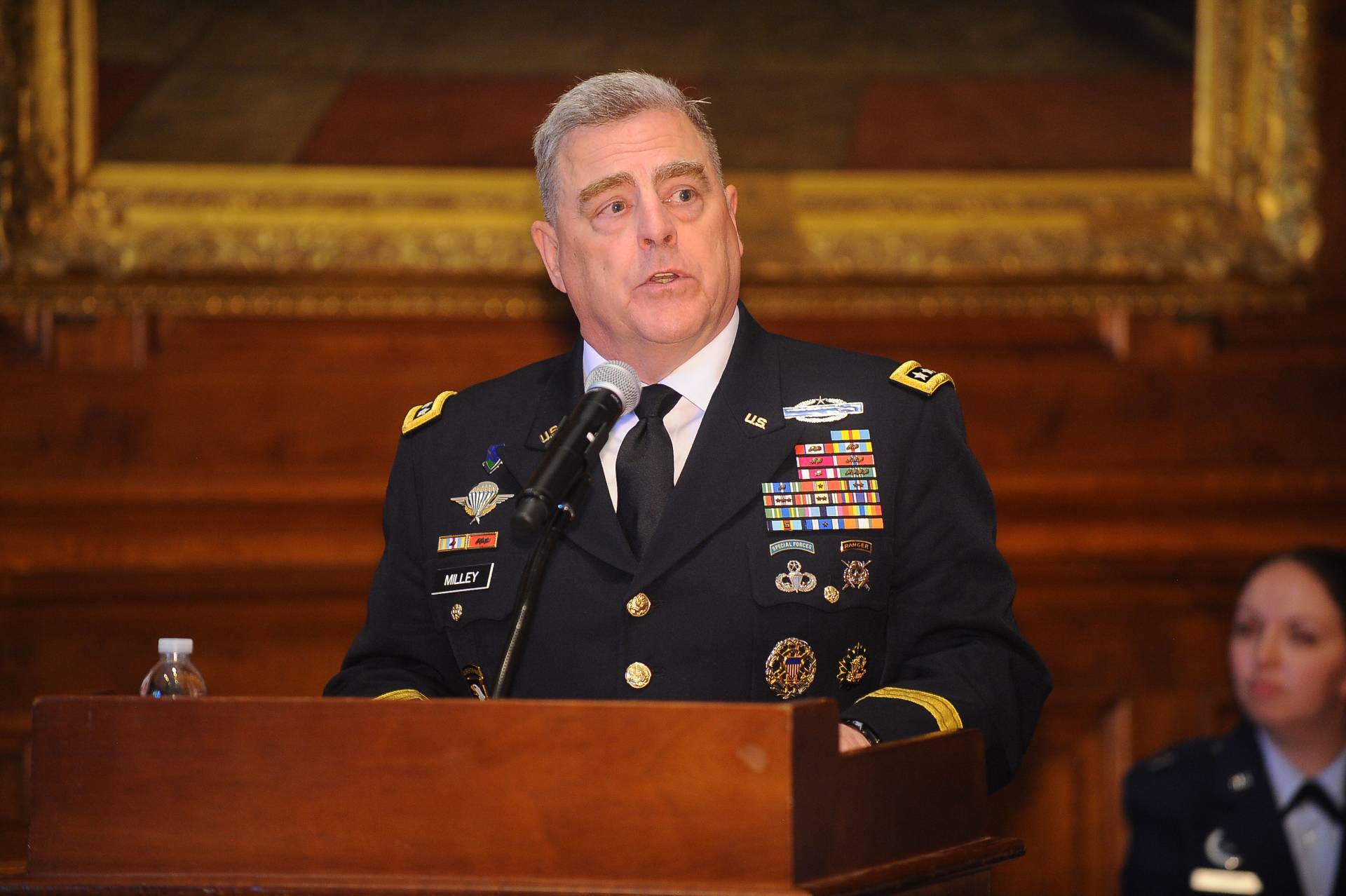 The ROTC Commissioning in the Faculty Room of Nassau Hall featured an address by U.S. Army Chief of Staff Gen. Mark Milley. Milley is a Princeton Class of 1980 graduate and he was commissioned as a military officer in the same room nearly 40 years ago.

Milley, who is nominated to become chairman of the Joint Chiefs of Staff, thanked the graduates for choosing to use their education and talents in service of others. He said the students spoke 17 languages and that all nine had been high school valedictorians or salutatorians.

“This is an incredibly talented group of nine,” he said. “[They are] high-quality individuals who have volunteered to serve their country. I can tell you the Army, Navy and Air Force are going to be so much better for your service to our nation.” 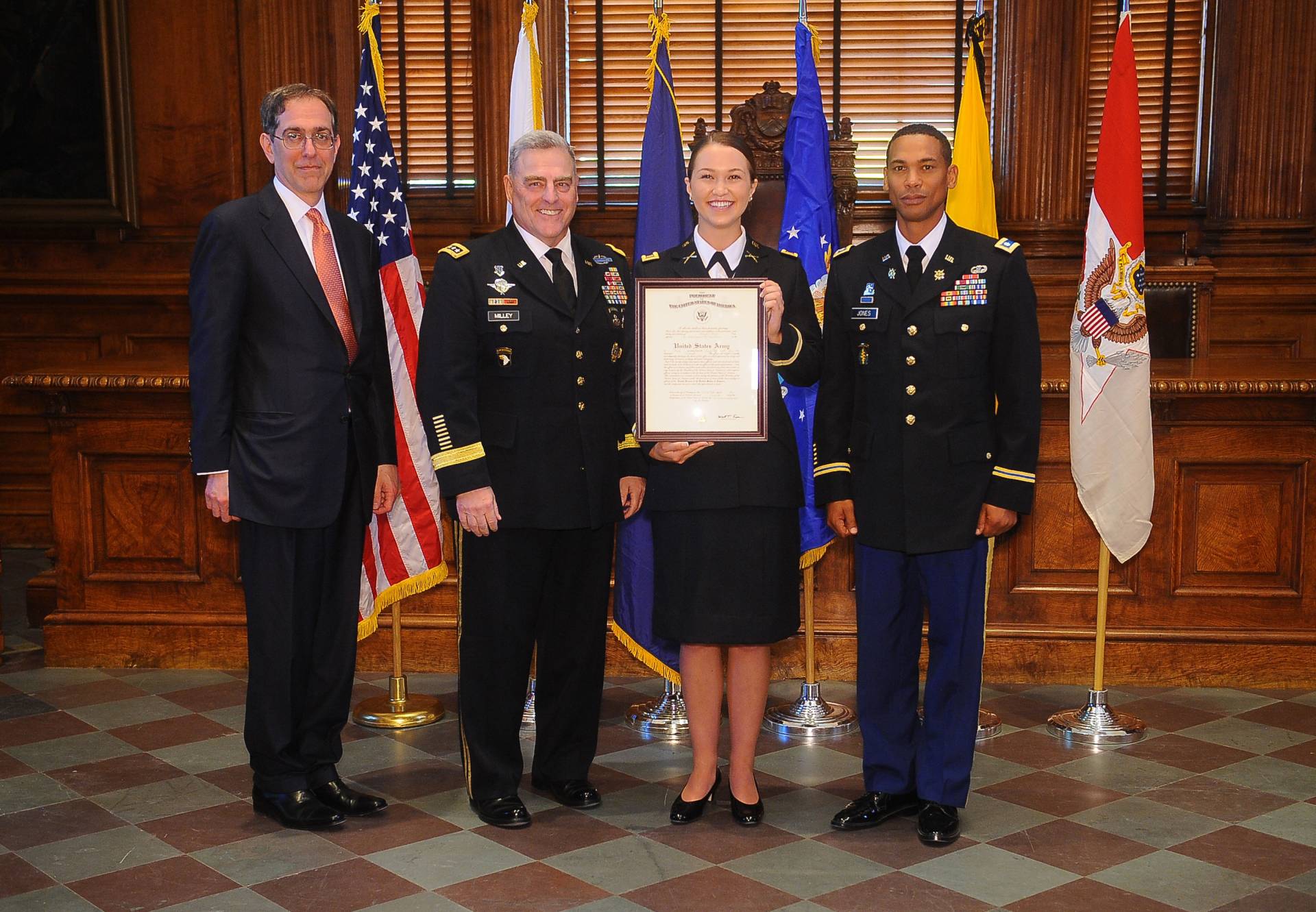 Princeton re-established its Navy ROTC program in 2014 after a 43-year absence from campus, and recently reinstated a transfer program aimed at admitting more veterans, community college and low-income students. The number of first-year students participating in ROTC has also grown since 2013.

In his remarks, Eisgruber called the commissioning ceremony a “proud and historic occasion.”

“A commitment to the United States armed forces exemplifies one meaningful and profoundly demanding way to use one’s education, as this University asks all its graduates to do, ‘in the nation’s service and the service of humanity,’” he said. 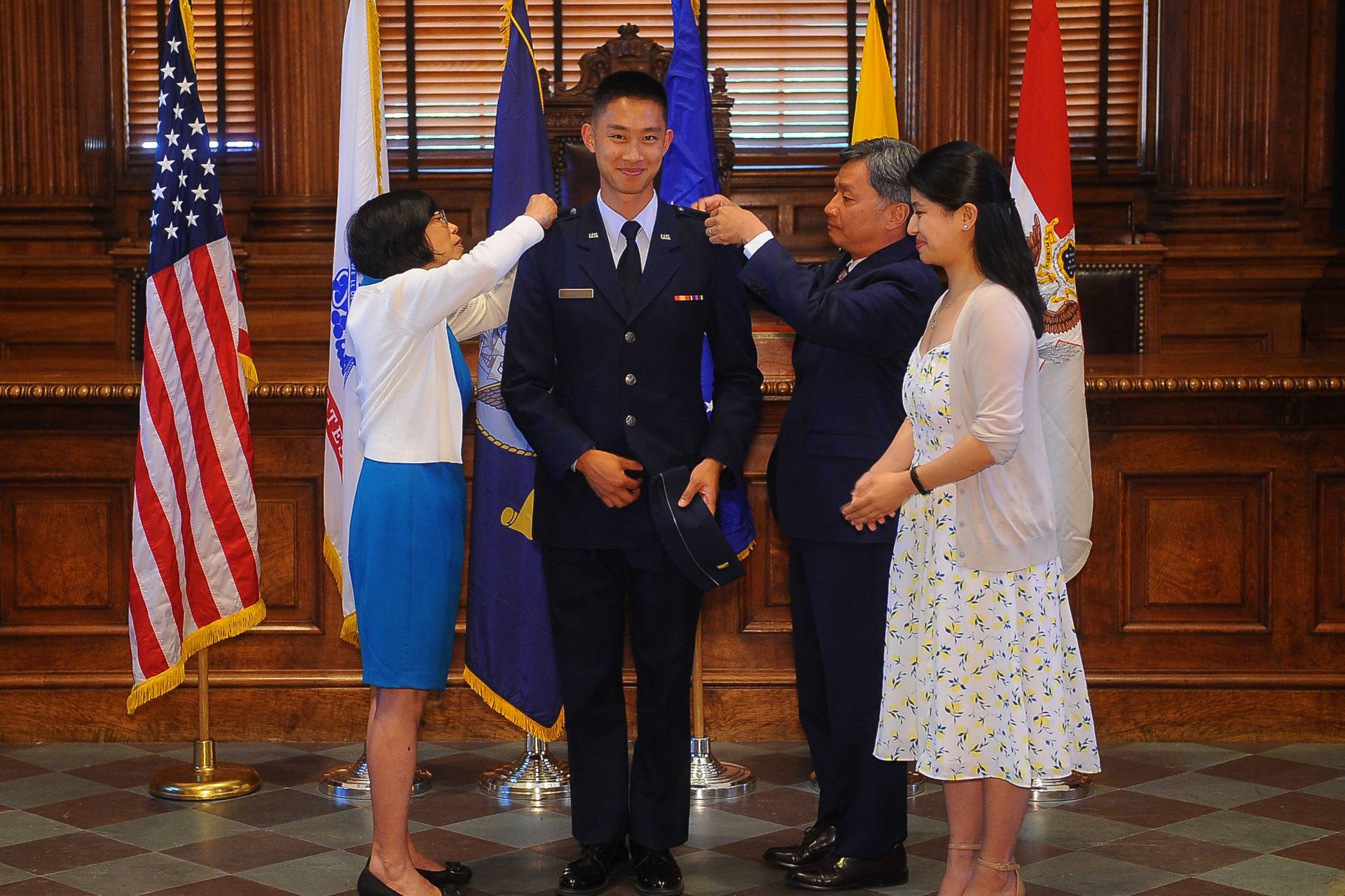 Hsia’s family helps pin ranks onto his uniform during the ROTC Commissioning ceremony. Hsia will serve as a second lieutenant in the U.S. Air Force as a pilot trainee at Columbus Air Force Base in Mississippi. This year was the first time since 1972 that Princeton hosted a tri-service ceremony that commissioned new officers who emerged from Army, Air Force and Navy ROTC programs.

After taking the oath of office, the newly commissioned officers received their ranking pins and performed the traditional Silver Dollar Salute.

The ceremony was attended by families and friends, University administrators and military representatives, including Adm. Michael Mullen, former chairman of the Joint Chiefs of Staff and the Charles and Marie Robertson Visiting Professor at Princeton. 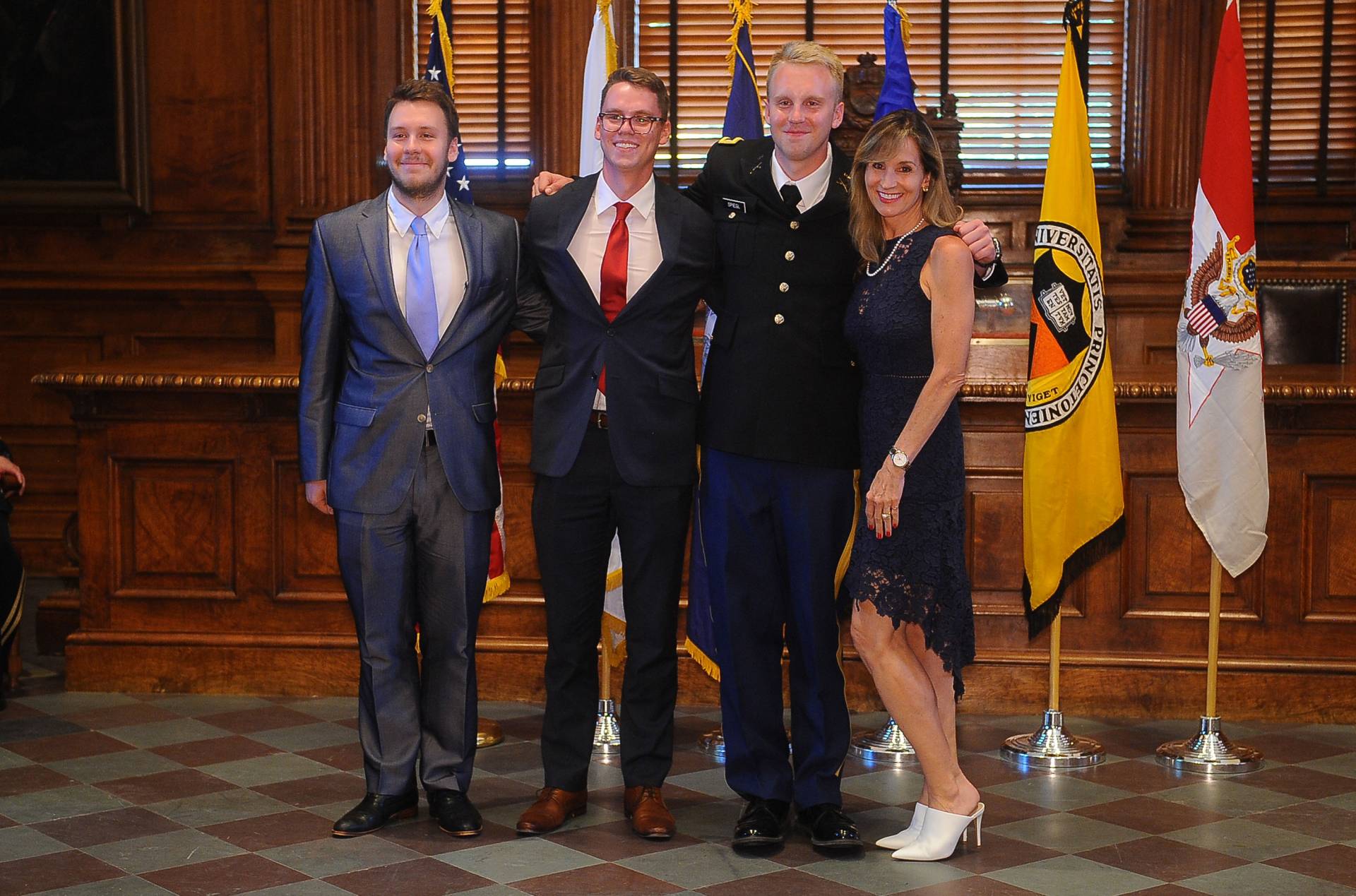 Spiegl (second from right) stands proudly with his mother, Denise, and brothers, Jarrett (far left) and Sterling (second from left), who are also cadets with Princeton’s Army ROTC.

The afternoon was particularly poignant for students’ parents, who pinned ranks onto their son or daughter’s uniform as they wiped tears from their eyes. Paul Spiegl, who hopes to serve in the Army’s 173rd Airborne Brigade Combat Team in Italy, was pinned by his mother and brothers. His brothers, Jarrett and Sterling Spiegl, are members of Princeton’s Class of 2021 and Army ROTC cadets. Olivia Rhodes, who will serve on the U.S.S. Stout in Naval Station Norfolk, Virginia, was proudly pinned by her parents wearing their Navy uniforms.

In concluding his address, Eisgruber praised the students’ dual accomplishments of graduating from Princeton and receiving military commissions.

“You carry forward the aspirations of our alma mater, and I am pleased to extend to you, on behalf of Princeton University, my best wishes for the future and my most heartfelt congratulations,” he said.