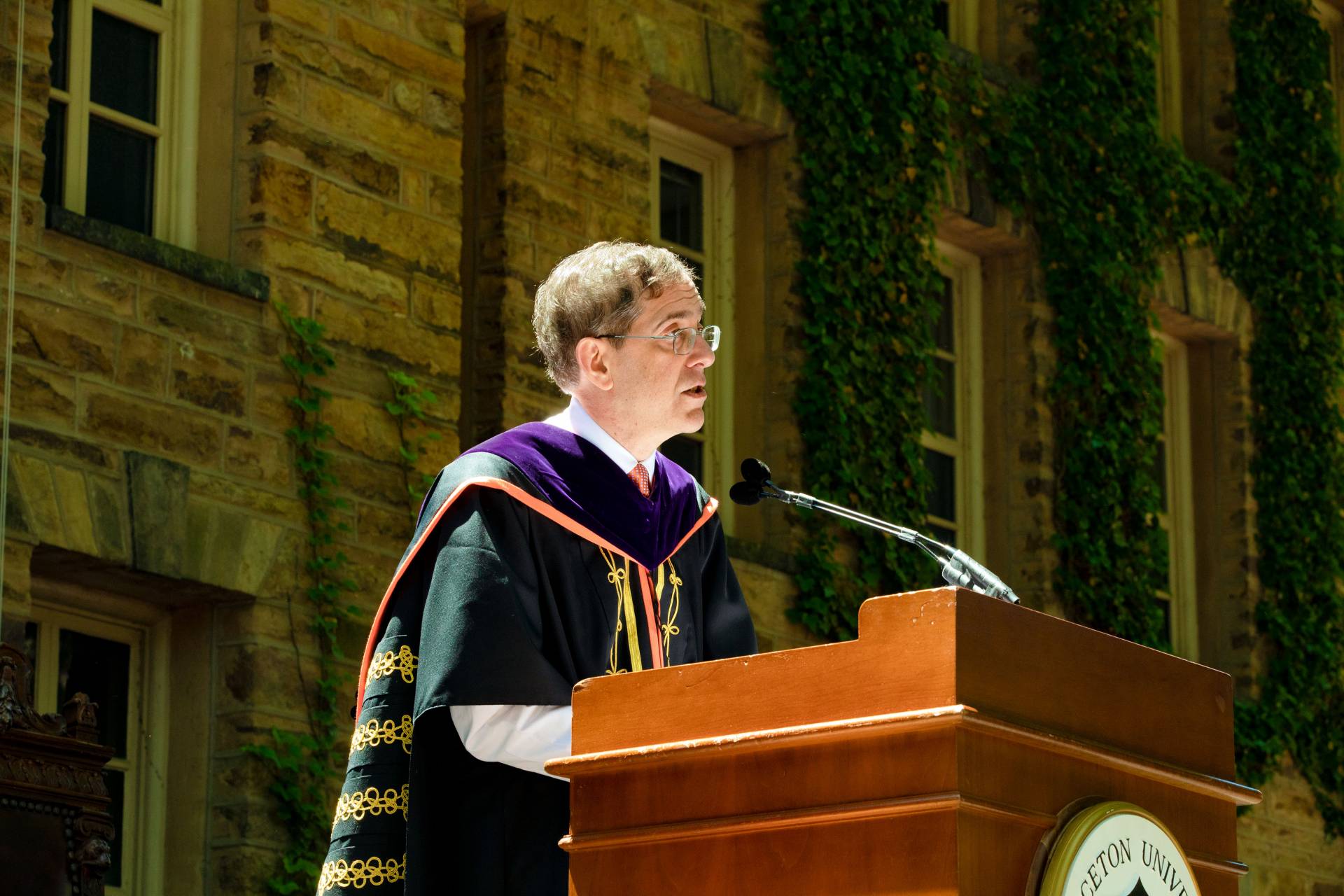 In a few minutes, all of you will march through FitzRandolph Gate as newly minted graduates of this University.  Before you do, it is traditional for the University president to say a few words about the path that lies ahead.

This valedictory ritual is at once utterly common and manifestly artificial.  If I or other speakers had sage insight into the wisdom required to navigate life’s unpredictable and sometimes tragic challenges, I guarantee you that we would have shared it long before now.  That, I suspect, is one reason why most graduation speeches, with rare and glittering exceptions, are little noted when delivered and quickly forgotten thereafter.

And if the ritual graduation speech is artificial under any circumstances, it seems all the more so at the conclusion of a reunions and commencement weekend when political contention occasionally flared amidst the academic calendar’s most joyous festivities and celebrations.  These local events reflect the mood of the country and indeed much of the world.  Ours is an ill-tempered time, one that leads some thoughtful observers to worry that we as a country are losing the capacity to disagree respectfully and civilly with one another.

Bitter scrutiny is now almost inevitable for anyone who voluntarily enters public life, and increasingly it extends also to some who never sought the world’s attention.  People just going about their lives, doing hard jobs or making tough choices as conscientiously as they can, may suddenly find themselves caught in an unwanted spotlight, the target of unproven and hurtful accusations permanently inscribed on the internet’s digital surfaces.

Even school children on a field trip may find themselves consumed by our fevered animosities.  Earlier this spring, Covington Catholic High School students interacted with a Native American man at the Lincoln Memorial.  A video of the encounter went viral, and the internet made the young boys international symbols of bigotry and racial insensitivity.  When a more complete and complex story emerged, the students’ defenders rushed, with some justification but too much glee, to condemn those who had circulated the original video before they knew all the facts.  Nobody involved emerged unscathed.  This unhappy chain of events began, ironically, in the shadow of a national monument inscribed with counsel frequently quoted but rarely heeded in our society:  “With malice toward none, with charity for all …”

The firestorm generated by the confrontation at the Lincoln Memorial was especially intense but the basic pattern is all too familiar.  Our politics has become hostage to an angry and accusatory culture, in which people too often prefer to issue provocations or denounce opponents, rather than engage in the vital civic work required by deliberative processes that are fair and inclusive to multiple interests and points of view.

Many observers have speculated about the sources of our anger, but I will leave the analysis of causation for another time. I want instead to focus on a reason for hope about society’s future, and your own.

Although the angriest people in our society may be the most noticeable, I am confident that they are not the most numerous.  Most people aspire to treat others decently, not to denounce them.  I have gotten to know many of you over your time here, and I know that you have the capacity and the values required to engage constructively across even very heated disagreements.

So, while I cannot pretend to have any magical guidance to prepare or protect you for the path that lies ahead, there is one piece of advice that I hazard to offer as you leave this campus:  you are moving into a world in which civic norms crucial to our shared political life are fraying.  Your generation’s ability to address the world’s problems will depend on, among other things, your capacity to nurture and repair those norms.  If ever there was a time when quiet, everyday virtues such as civility, truthfulness, due process, and moderation could be taken for granted, that day is gone.

These civil virtues are neither glamorous nor exciting.  They require us to respect others rather than draw attention to ourselves.  They are quiet rather than dazzling.  Yet, quiet though they may be, these virtues are also the indispensable foundation for any democratic society in which people seek to learn from one another and to pursue a common good that unites them across differences.  If you want a society that has the capacity to make real and lasting progress on issues of consequence, you will need not only to live those values but also to speak up bravely on their behalf.

Your education at this University, in its classrooms and beyond them, has given you the resources to defend the civil virtues and to provide the service, citizenship, and leadership that our world so needs.  I urge you to take up that challenge along with the others that await you on the path beyond FitzRandolph Gate.  As you begin that journey, all of us on this platform wish you well.  Whether you receive today a doctoral degree, a master’s degree, or an undergraduate degree, we hope that you will return often to Old Nassau and consider this campus one of your homes.  We will welcome you then as we cheer you today, wishing you every success as Princeton University’s GREAT CLASS OF 2019!! CONGRATULATIONS AND BEST WISHES!