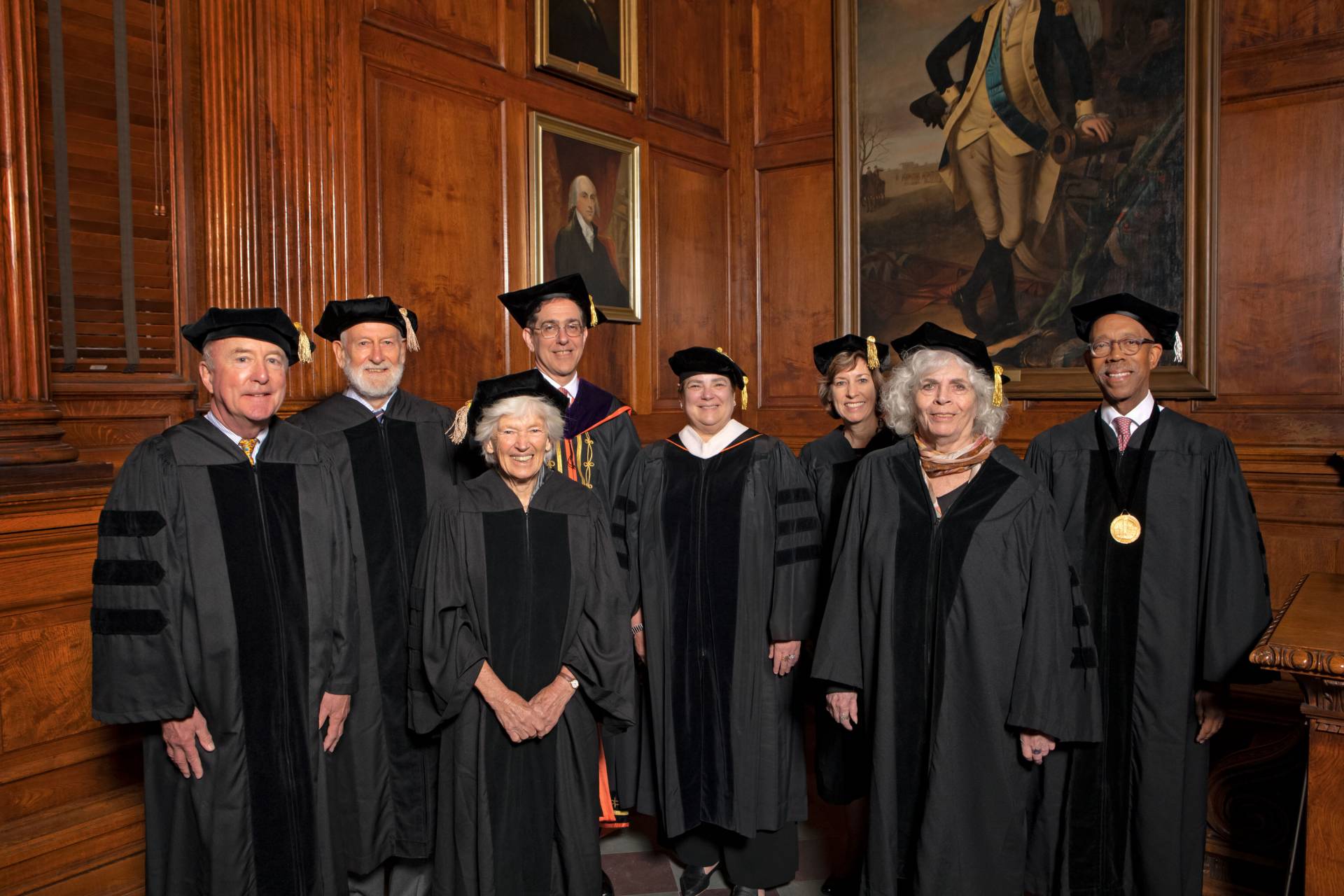 Dr. Michael Drake’s service in higher education spans nearly four decades, and he is widely recognized for his leadership on issues of diversity. In 2014, Drake became the 15th president of The Ohio State University. Through initiatives he launched to boost access and affordability, more than 33,000 students from middle- and lower-income Ohio families have received enhanced support while attending the university. Before joining Ohio State, Drake was chancellor of the University of California-Irvine, for nine years. During his tenure, the number of undergraduate students from underrepresented minorities increased by 60 %, and the graduation rates and percentages of first-generation and low-income students became among the highest in the country. Drake previously served as vice president for health affairs for the University of California system and as Stephen P. Shearing Professor of Ophthalmology, specializing in glaucoma. He is currently chair of the Association of Public and Land-grant Universities, past chair of the Association of American Universities and the Association of Academic Health Centers, and past president of the Alpha Omega Alpha Honor Medical Society. He is chair of the NCAA Board of Governors and chair-elect of the Big Ten Conference Council of Presidents. He also holds leadership roles with the American Talent Initiative and University Innovation Alliance. He has received numerous honors for his teaching, public service and research, and is an elected member of the National Academy of Medicine and the American Academy of Arts and Sciences. He received his A.B from Stanford University and his M.D. from UCSF School of Medicine.

With nearly four decades of experience as a visionary college administrator and professor, he has made an indelible impact on the field of higher education. During his tenure as its 15th president, The Ohio State University has achieved record highs in applications, graduation rates and academic excellence. His steadfast commitment to access and affordability has led to significant increases in need-based aid and the creation of pioneering initiatives that generate opportunity for first-generation and lower- and middle-income students. His leadership at Ohio State, at UC Irvine, and nationally has empowered tens of thousands of students to pursue the transformative power of a college degree, affirming the essential role of this country’s great public colleges and universities.

Rodney Frelinghuysen is a former Republican Congressman who represented New Jersey’s 11th district. He served 12 terms in the House of Representatives before retiring in January 2019. From 2017 to 2019, Frelinghuysen chaired the House Committee on Appropriations; he previously chaired its subcommittees on defense, and energy and water, the latter of which provides funding for fusion energy research. Frelinghuysen served three terms as a member of the Morris County Board of Chosen Freeholders, prior to his election to the New Jersey General Assembly in 1983 where he rose to become chairman of the State Assembly Appropriations Committee. In 1994, he was elected to Congress and was re-elected 12 times. Drafted in 1969 into the U.S. Army, he served until June 1971, with a year in Vietnam. Frelinghuysen has been a consistent champion of scientific research in the appropriations process, particularly for the Department of Energy, the National Science Foundation and the Department of Defense — all agencies that provide significant support for basic research at Princeton. He has been a longtime advocate for fusion energy research and the Princeton Plasma Physics Laboratory. He received his B.A. from Hobart College.

Representing New Jersey’s 11th Congressional district for 24 years, he is a stalwart public servant who made his mark as a tireless, effective champion for the funding of scientific research at the state and federal levels, and as a consensus-builder respected on both sides of the political aisle. Following in the footsteps of earlier generations of his family, he rose from election at the county level to chairing the state legislature’s appropriations committee and, most recently, the appropriations committee for the U.S. House of Representatives. In a career devoted to the selfless service of others and his country, he has been unfailingly supportive of this University and its mission and a persistent advocate for its leadership role in fostering scientific discovery, particularly in the field of fusion energy research, where he has long understood its great promise for the future of the world.

Peter and B. Rosemary Grant, Doctor of Science

Peter and B. Rosemary Grants’ legendary explorations over four decades of the group of 18 bird species known as Darwin’s finches have produced an array of insights into evolutionary biology. Peter Grant is the Class of 1877 Professor of Zoology, Emeritus, and professor of ecology and evolutionary biology, emeritus. Rosemary Grant is a senior research biologist, emeritus, in ecology and evolutionary biology. The husband-and-wife team came to Princeton University in 1985. Both study the interplay of genetics, ecology and behavior, especially on the question of why and when one species separates into two. They have published numerous papers on their research conducted on the Galápagos island of Daphne Major, which is in a natural state unaffected by humans. Among their many honors, in 2018 the Grants received the BBVA Foundation of Frontiers of Knowledge Award in the category of ecology and conservation biology. In 2017, they received the Royal Medal in Biology from the Royal Society of London in recognition of their work in demonstrating that “natural selection occurs frequently and that evolution is rapid as a result.” In 2005, the Grants received the Balzan Prize for population biology, followed by the Kyoto Prize in 2009. The Grants are members of the American Academy of Arts and Sciences, the National Academy of Sciences, the Royal Society of London, the American Philosophical Society, and the General Assembly of the Charles Darwin Foundation. Peter Grant received his B.A. from the University of Cambridge and his Ph.D. from the University of British Columbia. Rosemary Grant received her B.Sc. from the University of Edinburgh and her Ph.D. from Uppsala University.

With a chance meeting between 23-year-old biologists, a remarkable love story began. She leaned toward genetics while he leaned toward ecology, but they shared a passionate curiosity about life’s ever-shifting balance. A two-year study in the equatorial Galápagos evolved into the work — and partnership — of a lifetime, tracking natural selection in its twists and surprisingly rapid turns over five decades. Through years of drought and years of drenching rain, they expanded our understanding of genetics, ecology, evolution and behavior as they watched finches find food and choose mates, adapt and regroup, starve and thrive. They have embodied the advice that she once gave young scientists: “Follow your heart — the path will not be smooth, but there will be magic in it.”

Edith Grossman is a renowned translator of Spanish and Latin American literature. She has translated more than 30 books of fiction, nonfiction and poetry, including her renderings of Gabriel García Márquez’ “Love in the Time of Cholera” (1988) and Cervantes’ “Don Quixote” (2003). Grossman, who is from Philadelphia, started studying Spanish in high school. She spent a year in Spain as a Fulbright Fellow before embarking on an academic career. From 1964 to 1990, she taught Spanish at the City University of New York, New York University, and Dominican College, before turning full time to translation. Her work has garnered numerous honors. She won the PEN-BOMC Translation Prize in 2001 for her translation of Mario Vargas Llosa’s “Feast of the Goat.” In 2006, she received the PEN/Ralph Manheim Medal for Translation for lifetime achievement. The citation stated, “From the battlefield of her desk, Edith Grossman has journeyed across time and space, into a world that stretches from the enchanted plains of La Mancha to the muddy, magical waters of the Rio Magdalena.” In 2008, she received the Arts and Letters Award in Literature from the American Academy of Arts and Letters and a Guggenheim Fellowship. She received bachelor’s and master’s degrees from the University of Pennsylvania and a Ph.D. from New York University.

For over a half-century, she has provided us with superb Spanish-to-English translations, ranging from that best-known of all early modern novels, Cervantes’ “Don Quixote,” to the full panoply of Golden Age verse, to the influential modern novels of Nobel laureates Gabriel García Márquez and Mario Vargas Llosa, to the poetry of exiled activist Ariel Dorfman, and well beyond. She is unequaled in her ability to capture the particular style of the best of Spanish-language authors, and to convey that voice with nuance and force to the English-speaking public. In her book “Why Translation Matters,” she explains literature and translation as follows: “They are inseparable … they need and nurture each other, their long-term relationship, often problematic, but always illuminating, will surely continue for as long as both shall live.”

In 1993, American astronaut Ellen Ochoa became the first Latina to travel into space. From 2013 to 2018, Ochoa served as director of NASA's Johnson Space Center, which leads the human space flight enterprise in the United States. Ochoa served as a crew member on four space shuttle missions in a variety of roles including leading onboard scientific activities, operating the robotic arm, and serving as flight engineer during the launch, rendezvous and entry phases of the mission. Previously, she led the Flight Crew Operations Directorate, managing the astronaut office and the aircraft operations divisions. Ochoa has given more than 300 presentations focusing on the importance of science, technology, engineering and math education. Her many honors include NASA's highest award, the Distinguished Service Medal. Ochoa began her career as a research engineer at Sandia National Laboratories and NASA Ames Research Center. She has three patents in optical information processing and numerous publications. She is a fellow of the American Institute of Aeronautics and Astronautics, the American Association for the Advancement of Science, and the National Academy of Inventors. Ochoa serves on several boards and is chair of the Nomination Evaluation Committee for the National Medal of Technology and Innovation. She served for 10 years on the Stanford University Board of Trustees and held advisory roles with Stanford’s engineering school. She received her B.S. from San Diego State University and her Ph.D. from Stanford University.

Flying higher than most of us ever will, this first Latina in space embarked on a “Mission to Planet Earth” and helped us see our home from a new perspective.Unfurling a suffragette’s flag in the International Space Station, she reminded us of the perseverance of those who expanded the orbits of opportunity for others. Serving in Mission Control when Columbia fell, she faced tragedy with courage, compassion and a belief in the power of teamwork to find solutions and guide us back to our explorations of space. As the first Hispanic director of the Johnson Space Center, she helped transform NASA’s ranks, championing the innovation that comes from diversity and inclusion. Today this astronaut, scientist, inventor and musician remains dedicated to her greatest mission of all — inspiring the next generation to reach for the stars.