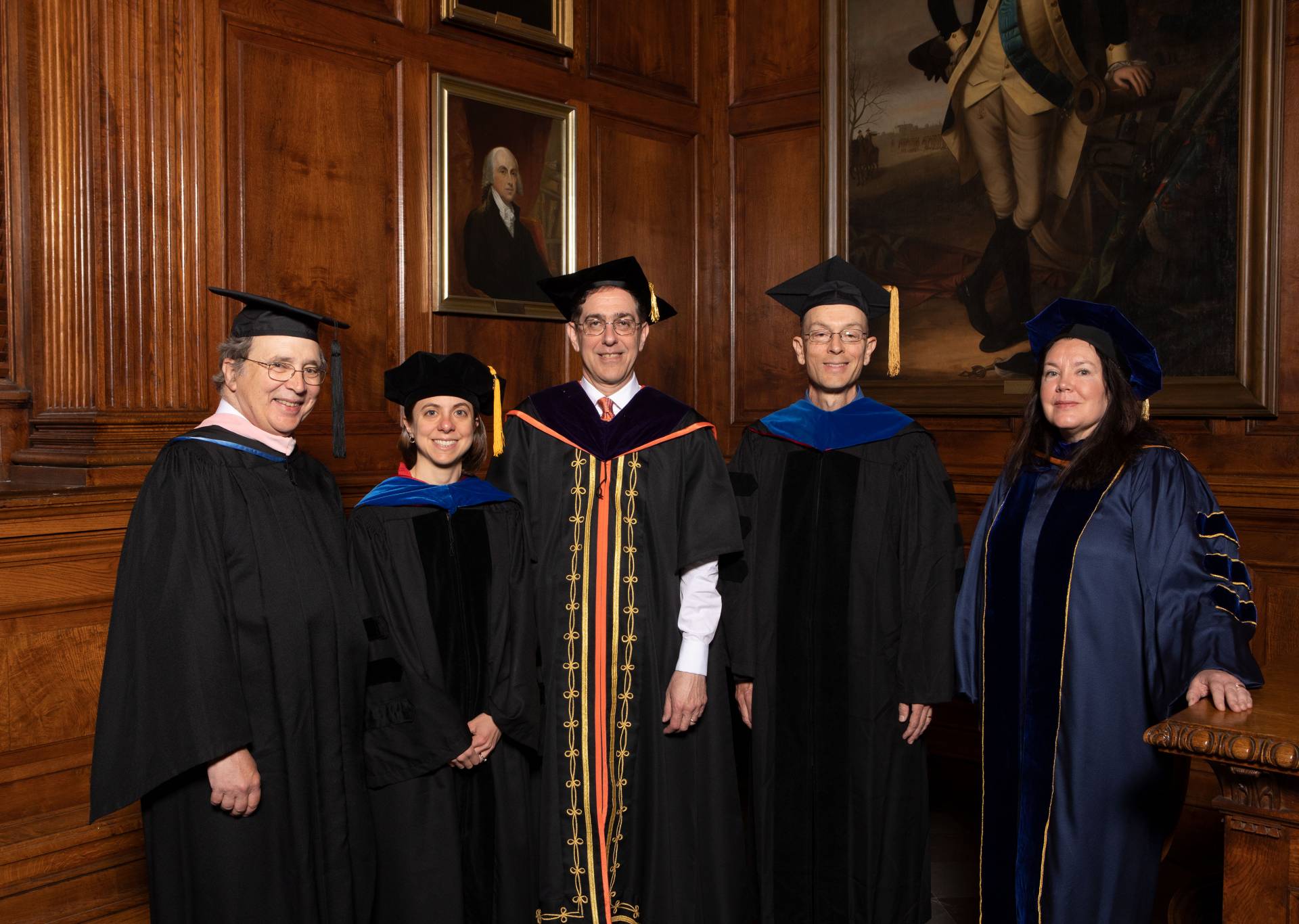 In the Faculty Room of Nassau Hall, Princeton President Christopher L. Eisgruber (center) honors the faculty members receiving the President’s Awards for Distinguished Teaching: (from left) Michael Pratt, senior lecturer, music; Mariangela Lisanti, assistant professor of physics; Ned Wingreen, Howard A. Prior Professor in the Life Sciences and professor of molecular biology and the Lewis-Sigler Institute for Integrative Genomics; and Brigid Doherty, associate professor of German and art and archaeology.

The awards were established in 1990 through a gift by Princeton alumni Lloyd Cotsen of the Class of 1950 and John Sherrerd of the Class of 1952 to recognize excellence in undergraduate teaching by Princeton faculty members. Each winner receives a cash prize of $5,000, and their departments each receive $3,000 for the purchase of new books.

Doherty, who has served on the faculty since 2003, focuses on the interdisciplinary study of 20th-century art and literature, with special emphasis on relationships among the visual arts, literature, and aesthetic and psychoanalytic theories of German modernism.

She is an associated faculty member in the School of Architecture and is a member of the executive committee of the Program in Media and Modernity.

Doherty’s colleagues highlight her dedication to graduate students, who enroll in her courses from across the humanities. “What is extraordinary about her graduate teaching and advising is the blend of rigor and sensitivity in her relationships with her students,” noted a faculty member, adding that she “demands the highest quality of work — in seminar papers and dissertations alike — but she also demonstrates, over many hours of meetings and conferences, how that work is to be done.”

A colleague who has co-taught courses with Doherty noted: “Brigid distinguishes herself in the classroom through the intensity and engagement of her teaching. … She is an unusually focused listener, and is able to draw from every comment just the element most likely to further the general discussion. This same care is equally evident in her comments on student work — her comments are extensive, critical in an enormously constructive way, and always encouraging.”

Doherty’s course “Art Against Culture? that centered on the work of the German artist Hanne Darboven and included graduate and undergraduate students. One graduate student said: “This class — entirely unique in its scope and organization in my academic experience — was particularly important for me as a graduate student because Professor Doherty created an environment for open inquiry in which I felt comfortable to act both as student and as a mentor of sorts for the younger members of the seminar. Working through difficult texts and concepts, I felt Professor Doherty guiding me both as a thinker and as a future teacher.”

A former undergraduate student commended Doherty’s close critical attention to academic work — and her broader influence. “Professor Doherty encouraged me to engage in the academic life of the University beyond the classroom,” she said, such as inspiring her to organize a film series and helping her build connections at Princeton and in Germany.

Lisanti, a Princeton faculty member since 2013, is a theoretical particle physicist who is primarily interested in models of dark matter and their experimental signatures. Dark matter comprises nearly 85% of the matter in the universe, yet its fundamental nature is unknown.

A colleague noted that Lisanti is a “spectacular teacher and mentor” as well as an innovative teacher. Last year, Lisanti developed a new seminar for first- and second-year undergraduates, “Introduction to Research in Physics.”

Responses from students about the course include, “Every time I came out of this class, I’d feel super inspired by all the cool physics stuff Lisanti had introduced us to.” Stated others: “[She] inspires confidence and perseverance in all her students” and “by enriching the education of students on a daily basis, [she] represents the best of what Princeton has to offer.”

A colleague pointed to Lisanti’s active learning approach as a key factor in this success. “She begins class by explaining or reviewing the material, and then gives students a problem to solve, telling them they may solve it alone or in groups. … Professor Lisanti does not micromanage the process, but circulates and checks in with the groups. She will then post the solutions after the class.”

One colleague who served as departmental representative and interacted with many students, said: “It was heartwarming to see the transformation in the faces and the level of enthusiasm in the voices of the students when they started talking about what they learned and experienced in her classroom.” In taking a peek into Lisanti’s classroom, the faculty member saw whiteboards set up for students to exchange ideas. “The whiteboards were filled up and colorful and creative. I could see the students loved what they were doing.”

Further, Lisanti supports students beyond the classroom, such as helping female physics majors form the Undergraduate Women in Physics club, members of whom also have given presentations in area schools, inspiring others.

This year celebrates Pratt’s 41st anniversary at Princeton. “As conductor of the Princeton University Orchestra, he has profoundly impacted well over a thousand students, the majority of whom worked with him throughout their undergraduate careers,” noted a colleague in the music department.

As founder and director of the Program in Music Performance, Pratt is recognized as creating “one of the finest music programs anywhere in the country,” said a colleague.

Pratt established the partnership with the Royal College of Music in London and founded the Richardson Chamber Players, which “provided the opportunity for students to play chamber music on the stage at Richardson with their teachers, a rare experience indeed,” noted a colleague.

A recent alumnus remarked, “For so many students at Princeton, my former self included, Michael is a teacher, a mentor and the perfect embodiment of benevolence.”

A current student said, “Out of all the incredible opportunities and experiences that Princeton University has afforded me, that which I most greatly treasure is the privilege to play timpani under the baton of Maestro Michael Pratt.”

Students in the certificate program commended Pratt for helping them develop as singers. “[The program] allowed me to take voice lessons free of cost and participate in opera productions for credit [through MUS 214],” said a student who went on to earn a master’s at a top conservatory. A former student who is now an opera singer said, “He was an important mentor for me throughout my time [at] Princeton and guided me through my concentration in music, my extracurricular performance activities, as well as how I might go out into the world as a professional singer.”

Wingreen researches intracellular networks in bacteria — how bacteria sense their environments and adjust their behaviors accordingly. His teaching has focused on on biological dynamics and quantitative biology. Wingreen was instrumental in establishing the graduate Program in Quantitative and Computational Biology.

A colleague noted that “Ned is repeatedly praised for his commitment to students as scholars and as people,” whose lab is “considered a hub and catalyst for interactions across fields. … [H]e is an extraordinary teacher, wholly devoted to mentorship, a passionate advocate for students, and a scholar of the highest caliber.”

Wingreen’s course “Method and Logic in Quantitative Biology” counts toward the Ph.D. in five academic areas. A former graduate student, now a professor herself, stated: “Teaching biology graduate students the importance of mathematical literacy can be a delicate subject, because historically, there is a widespread perception among this body of students (maybe in particular women) that math is hard and biology is the one place where one can excel in science without being good at math. By his unassuming, welcoming and enthusiastic teaching style, Ned completely changed this perception for me, and undoubtedly many other female (and male) students as well.”

Wingreen is known for his mentorship of students long into their careers. One faculty researcher who studied with Wingreen said much of his own “success in [the] academic setting can be attributed to Ned, and he views mentoring as a lifetime job.”

Wingreen’s colleagues also value him as a teacher. One member of the molecular biology department stated, “It is very rare to find such a caring, knowledgeable and generous mentor at this crucial career stage, and I am extremely grateful for having Ned fulfill that role.”

A faculty member who has long collaborated with Wingreen lauded his strengths as a tutor and how learning about quantitative methods from him “paid off.”