by Michael Caddell, Office of Communications 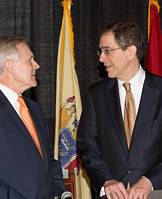 Princeton University President Christopher L. Eisgruber (right) and Secretary of the Navy Ray Mabus talk after signing the crosstown agreement among Princeton, the Navy and Rutgers University formally reinstating the Naval Reserve Officer Training Program at Princeton during a ceremony at Chancellor Green on April 15.

Flanked by midshipmen and prompted by the tune of a boatswain's pipe, Princeton University President Christopher L. Eisgruber, United States Secretary of the Navy Ray Mabus, and President of Rutgers University Robert Barchi processed one-by-one into Chancellor Green on the Princeton campus. They gathered April 15 for a signing ceremony to formally reinstate the Naval Reserve Officer Training Corps (NROTC) program at Princeton in partnership with Rutgers.

"I am so pleased that a new generation of students will have the opportunity to benefit from the NROTC's leadership training and character building as a part of their Princeton education," Eisgruber said. "The NROTC program, and our Army and Air Force ROTC programs, are important elements of our efforts to live up to Princeton's informal motto: 'In the Nation's Service and in the Service of All Nations.'"

Under the new agreement, Princeton students may participate in the NROTC college-option program beginning in fall 2014. NROTC active duty Navy and Marine Corps instructors will lead and teach Princeton NROTC midshipmen on the Rutgers campus, providing students the opportunity to earn a commission in the United States naval service. Students may apply for two- or three-year scholarships through the NROTC as they become available. The application period for four-year scholarships will begin June 1. 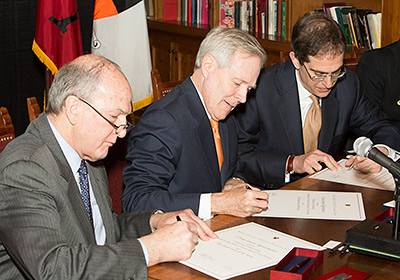 From right: Princeton President Eisgruber, Secretary of the Navy Mabus and Rutgers President Robert Barchi sign the program agreement. Under the agreement, Princeton students may participate in the NROTC college-option program beginning in fall 2014.

Mabus noted that the reinstatement of the program was particularly important because of the partnership it represents.

"Princeton and the Navy have a great history together, and what this means is that going forward the Navy and Marine Corps will get very talented officers from Princeton, and they will carry on Princeton's tradition of service to our country," Mabus said.

Among the audience of about 100 who witnessed the ceremony were several alumni who participated in NROTC during their time at Princeton, served in the Navy, or sit on the Alumni and Friends of the Princeton University ROTC board. Also in attendance were Rutgers student midshipmen, instructors, and Rutgers and Princeton university officials.

Eisgruber recognized the strong support for reviving the NROTC at Princeton, mentioning that many alumni who were unable to attend the ceremony sent notes expressing their excitement about the program's return.

"Many Princeton alumni who participated in NROTC, including those who have joined us here today, can attest to the lasting impact it had on their lives," Eisgruber said.

Citing how the ideal of service is ingrained in the Princeton education, Eisgruber said the program will strengthen the University's mission to help educate future leaders. 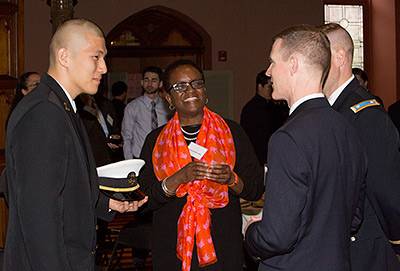 Valerie Smith, dean of the college at Princeton, speaks with attendees before the start of the ceremony.

"Through their Princeton undergraduate and NROTC curricula, these students will develop a rich, diverse set of perspectives and skills, and will emerge better prepared to serve society in any number of ways," Eisgruber said.

Following the ceremony, a lunch was held where students, alumni and officials had the opportunity to meet and celebrate the program's return to campus.

Eisgruber honored Princeton veterans for their service, including Kirk Unruh, the University's recording secretary, a member of the Class of 1970 and a retired rear admiral. Mabus noted the many ways the Navy and Marine Corps represent America, including as ambassadors, and said that the military must be diverse and reflect the country it is tasked to protect.

Initially established in 1945, the Princeton NROTC program remained active until 1971. In addition to the NROTC, Princeton has offered an Army ROTC program since 1919, which now includes cadets from the College of New Jersey, Rider University and Rowan University, and offers an Air Force ROTC program through a crosstown agreement with Rutgers. 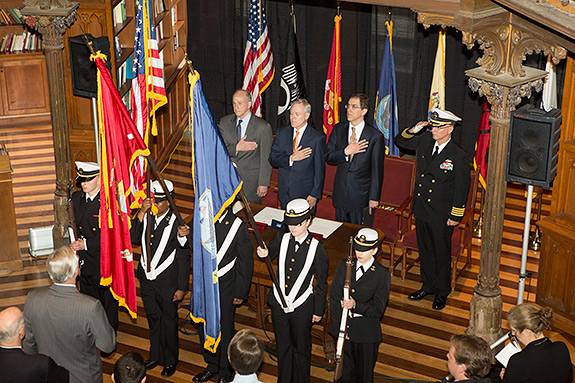 All attendees stand at attention while the United States Navy Band plays "The Star-Spangled Banner."