Following the pomp and circumstance of Princeton’s 271st Commencement the morning of June 5, a joint commissioning ceremony was held in Nassau Hall with the Princeton Army and Naval Reserve Officers Training Corps (ROTC) programs. Gen. Mark Milley, chief of staff of the U.S. Army and Class of 1980 Princeton graduate, gave the commissioning address. 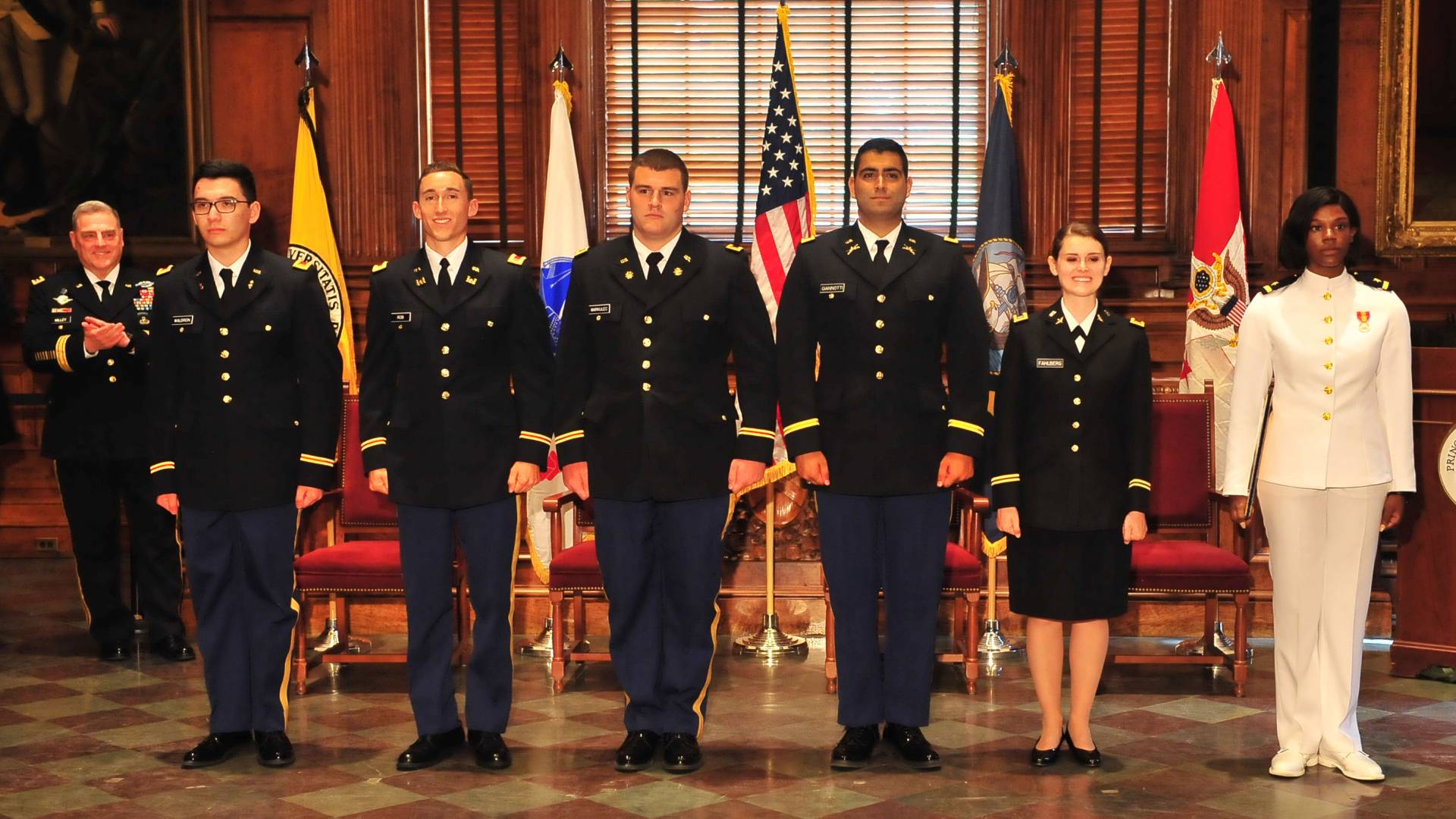 (Left to right) Princeton University seniors Theodore Waldron, Samuel Rob, Michael Markulec, Matthew Giannotti and Natalie Fahlberg are commissioned as second lieutenants in the U.S. Army, and Christina Onianwa is commissioned as an ensign in the U.S. Navy. The students participated in Princeton’s Army and Naval Reserve Officers Training Corps (ROTC) programs and were commissioned during a ceremony on June 5.

During the ceremony, Class of 2018 graduates Theodore Waldron, Samuel Rob, Michael Markulec, Natalie Fahlberg and Matthew Giannotti were commissioned as second lieutenants in the U.S. Army. Christina Onianwa was commissioned as an ensign in the U.S. Navy. She is the first student to participate in Naval ROTC for all four years since the program was reestablished at Princeton.

The commissioning marked the second year in a row the Princeton Army and Naval ROTCs held a joint ceremony. The Army ROTC Tiger Battalion was established in 1919 following World War I. The Naval ROTC previously was active on campus from 1945 to 1971, and was reinstated in 2014 as a joint program with Rutgers University. Princeton also offers a joint Air Force ROTC program with Rutgers. 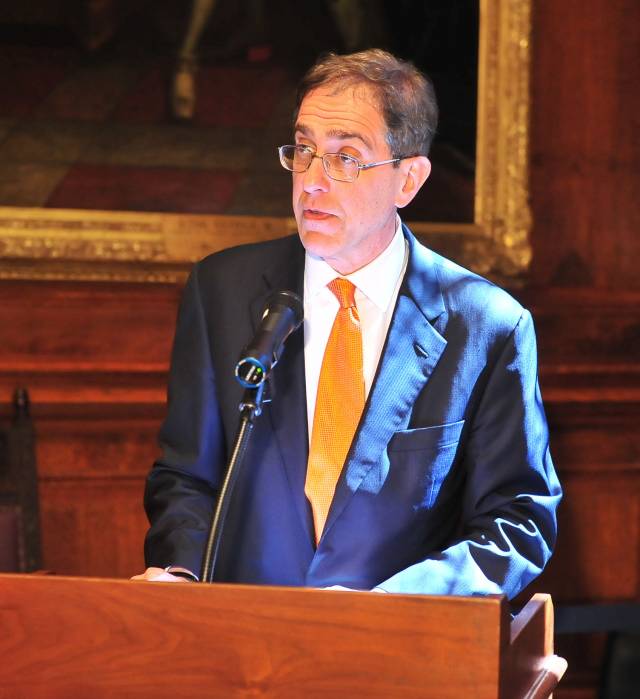 Princeton President Christopher L. Eisgruber speaks to students and their families during the ROTC commissioning ceremony. Eisgruber helped reinstate a Naval ROTC program at Princeton through a joint agreement with Rutgers University. The Army ROTC Tiger Battalion has been on campus since 1919.

Princeton President Christopher L. Eisgruber, who helped re-establish the Naval ROTC, also spoke at the commissioning ceremony. The event featured an invocation from Rev. Alison Boden, dean of religious life and the chapel; remarks by commanding officers Capt. David Wright of the Naval ROTC and Lt. Col. Kevin McKiernan of the Army ROTC; and a benediction by Rev. Gabriel Zeis, chaplain for the Aquinas Institute at Princeton.

Milley, a four-star general who earned his Army commission through Princeton ROTC, presented commissioning certificates to the students. After their graduation from Princeton, the students will serve as active duty officers, Army Reserve soldiers or National Guard members. 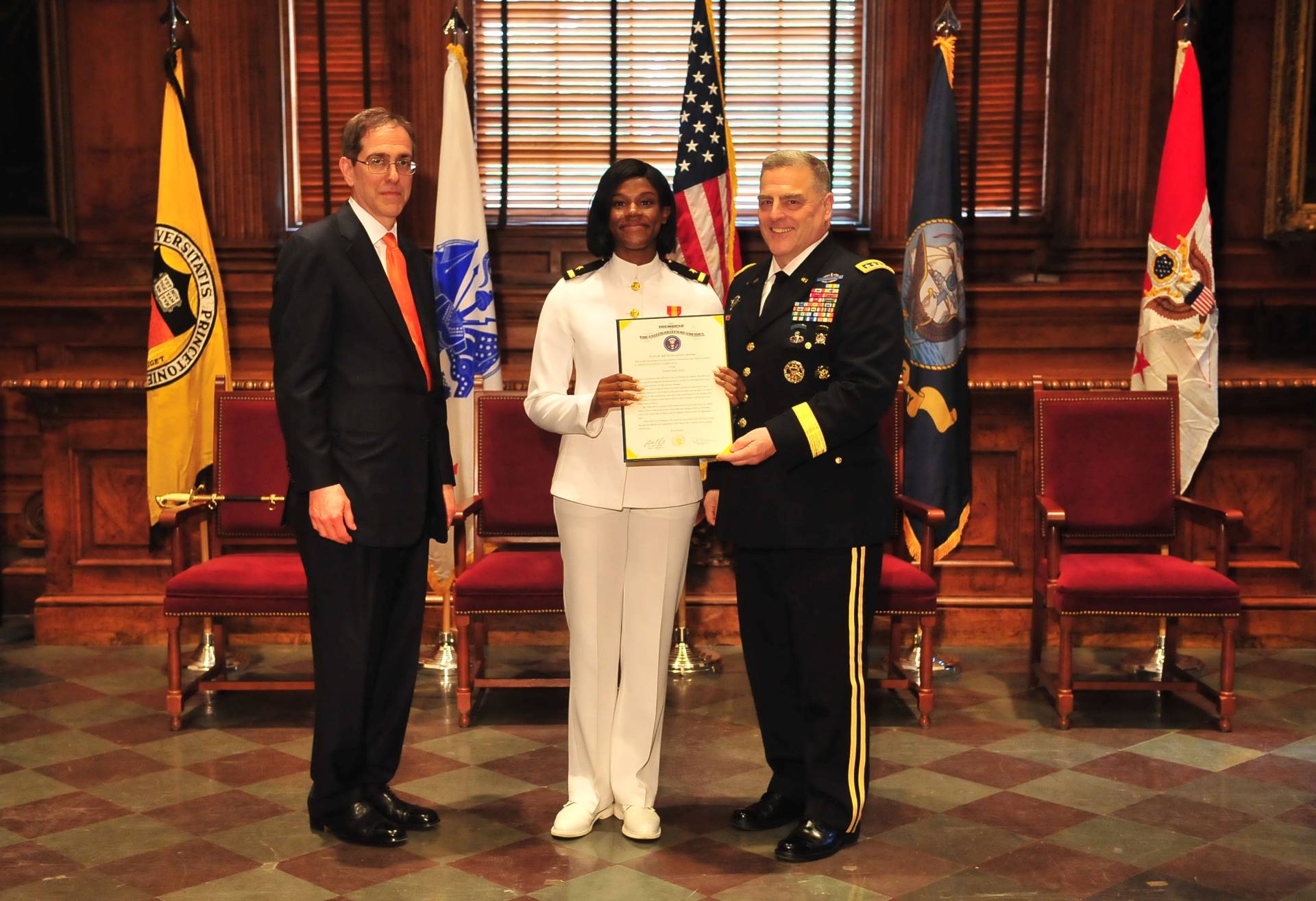 Onianwa receives her commission certificate from Eisgruber and Gen. Mark Milley (right), chief of staff of the U.S. Army and Class of 1980 Princeton graduate. Milley also gave the keynote address at the joint Army-Naval ROTC ceremony.