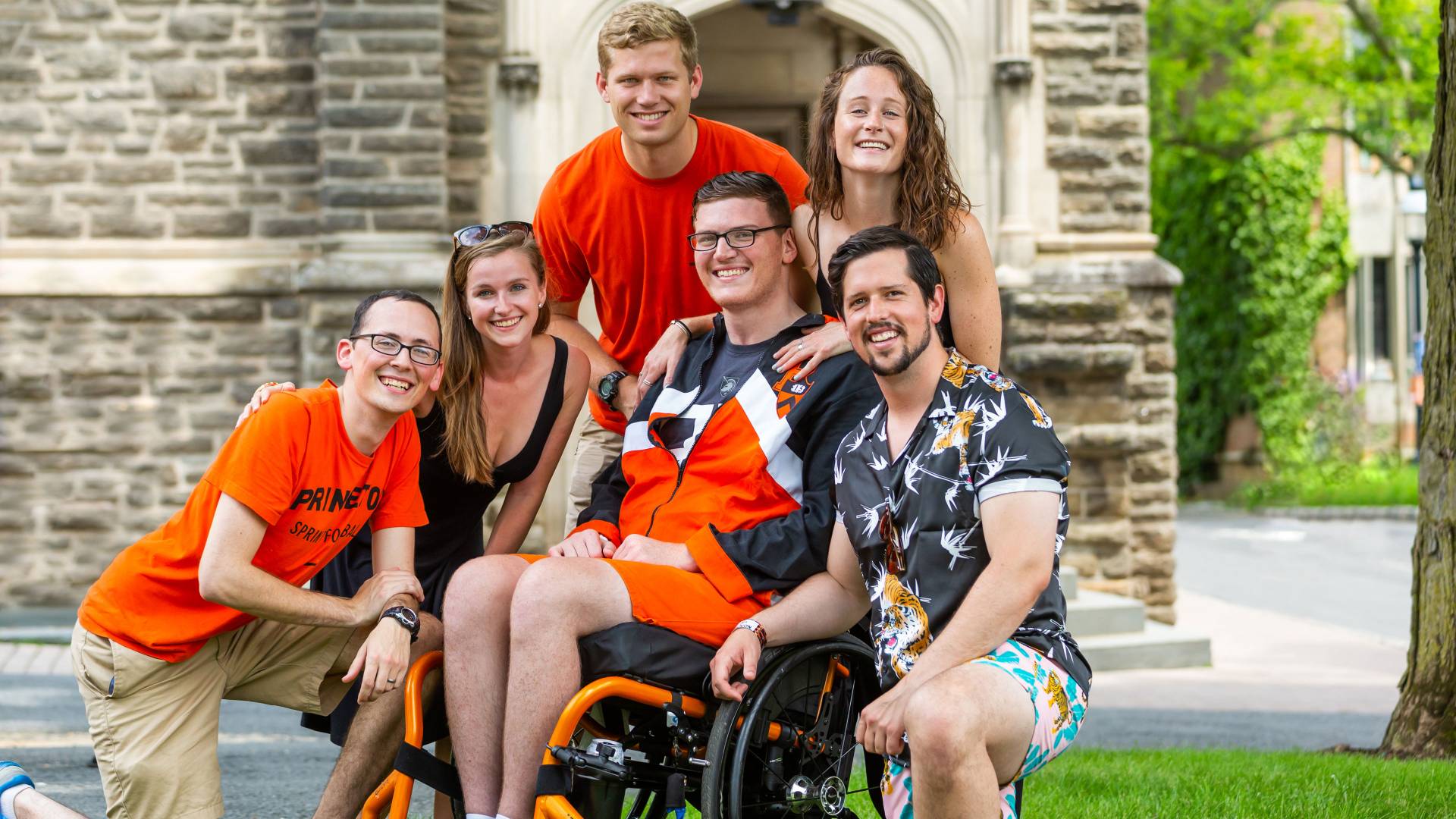 Victor Prato, a 2015 alumnus, pictured at Reunions 2018, reflects on freedom, his experience in Princeton's ROTC program, the devastating injury he sustained in Afghanistan and what service means to him now.

Victor Prato, a member of the Class of 2015, majored in mechanical and aerospace engineering. At Princeton, he was an ROTC cadet and a defensive lineman on the varsity football team. On Saturday, Nov. 17, he will visit Princeton as honorary team captain for Princeton Athletics' Salute to Service Day at the Princeton-Penn football game.

On Nov. 13, 2017, during his first week as engineering officer and leader of his platoon in Kandahar, Afghanistan, his convoy was struck by an IED during a routine patrol. He suffered multiple soft-tissue injuries and a severe spinal cord injury. He was awarded the Purple Heart from President Trump on Dec. 21, 2017.

In honor of Veterans Day, Prato responded to our questions via email from Tampa, Florida, where he continues outpatient therapy at James A. Haley Veterans Hospital.

What does freedom mean to you?

When I was getting ready to serve in ROTC, I thought to myself why do I want to serve, what values are important to me that I need to uphold? What I came up with was the ideas of freedom, liberty and justice were vitally important. Moreover, they were important enough not only to defend for my fellow Americans, but to spread to the parts of the world that don't have them.

Freedom, liberty and justice are important keys to what makes us human, and I think that the human spirit strives for them and rebels against anything that keeps them from it. People deserve to be protected from oppression and wrongdoing, and as long as they are not trying to oppress or do wrong to others, they should be allowed to do what they would like. I realized if I didn't put my life on the line to defend these things, then who would? 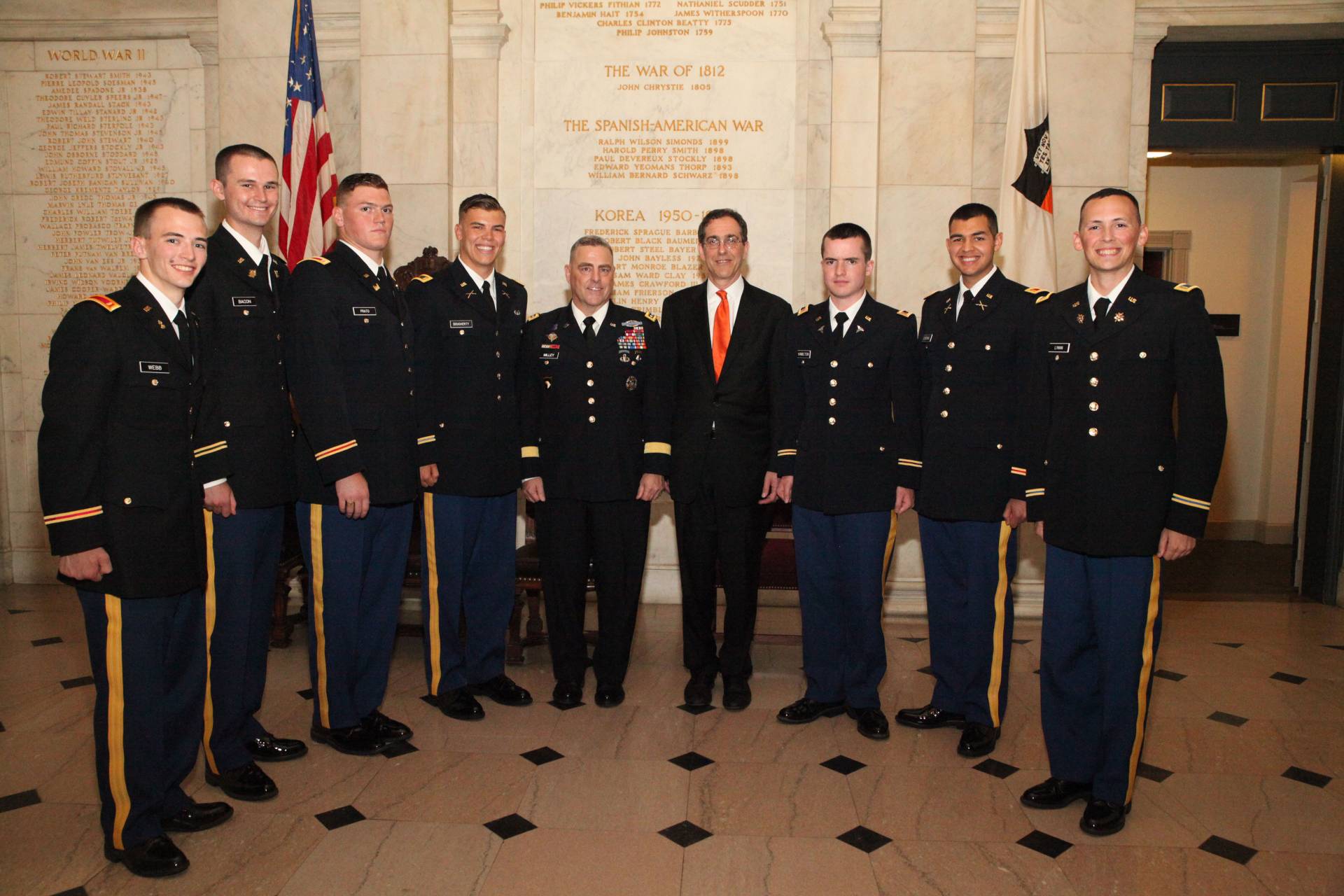 Prato, third from left, joins his fellow cadets at the 2015 ROTC Commissioning Ceremony in Nassau Hall with Gen. Mark Milley (fifth from left), chief of staff of the U.S. Army and a member of the Class of 1980, and President Christopher L. Eisgruber (fourth from right).

What is something you learned at Princeton that you carried with you every day as a soldier?

Probably the biggest thing that I learned at Princeton was how to work hard. I certainly understood the concept before I got to Princeton but I'd never really been challenged. I challenged myself at Princeton by majoring in mechanical and aerospace engineering, by playing on the football team and by participating in ROTC. This caused me a lot of trouble as all were very time-consuming and often directly conflicting in their time commitments. People often asked me how I was managing to do it, and I always told them to ask me again when I was done with it.

In hindsight I really struggled. I pulled all-nighters regularly and I had a lot of stress. I also spent a lot of my time quietly introspecting. I learned a lot of techniques to keep myself awake, to focus, to ignore pain and to avoid complaining or feeling sorry for myself.

The most important thing I was taught by my classmates, my teammates and the other cadets at Princeton was humility. While I'm not confident that I've done a particularly good job keeping up with any of these things that I've learned, I think that they certainly served as a blueprint to a successful future.

What was one of your most memorable courses at Princeton outside your major?

"The American Civil War and Reconstruction," taught by Matthew Karp [assistant professor of history], was the first history course I took at Princeton. I had never gone so in depth into history. My history courses in high school were more focused on breadth. It was sort of a paradigm shift for me to realize that there were real, fallible people that were making decisions throughout the entirety of history and that history wasn't just a set of events that everybody knew what the outcome was, which can be the way that history is taught in high school.

Why did you join Princeton's Army ROTC program?

Both my grandfathers served in World War II. My paternal grandfather joined the Army in 1936, went to Panama, got out in 1940 and was drafted again in 1942. He was sent to the Aleutian Islands for the invasion of the island Kiska and spent most of the war there. My maternal grandfather was in the Navy and spent most of the war on a landing craft infantry, one of the smallest seagoing ships in the Navy at the time. Neither of them talked about their service much, but my father's father had stories from training in the Army. Everything that I heard from the two of them painted a very positive picture of how their time in the service affected the rest of their lives. 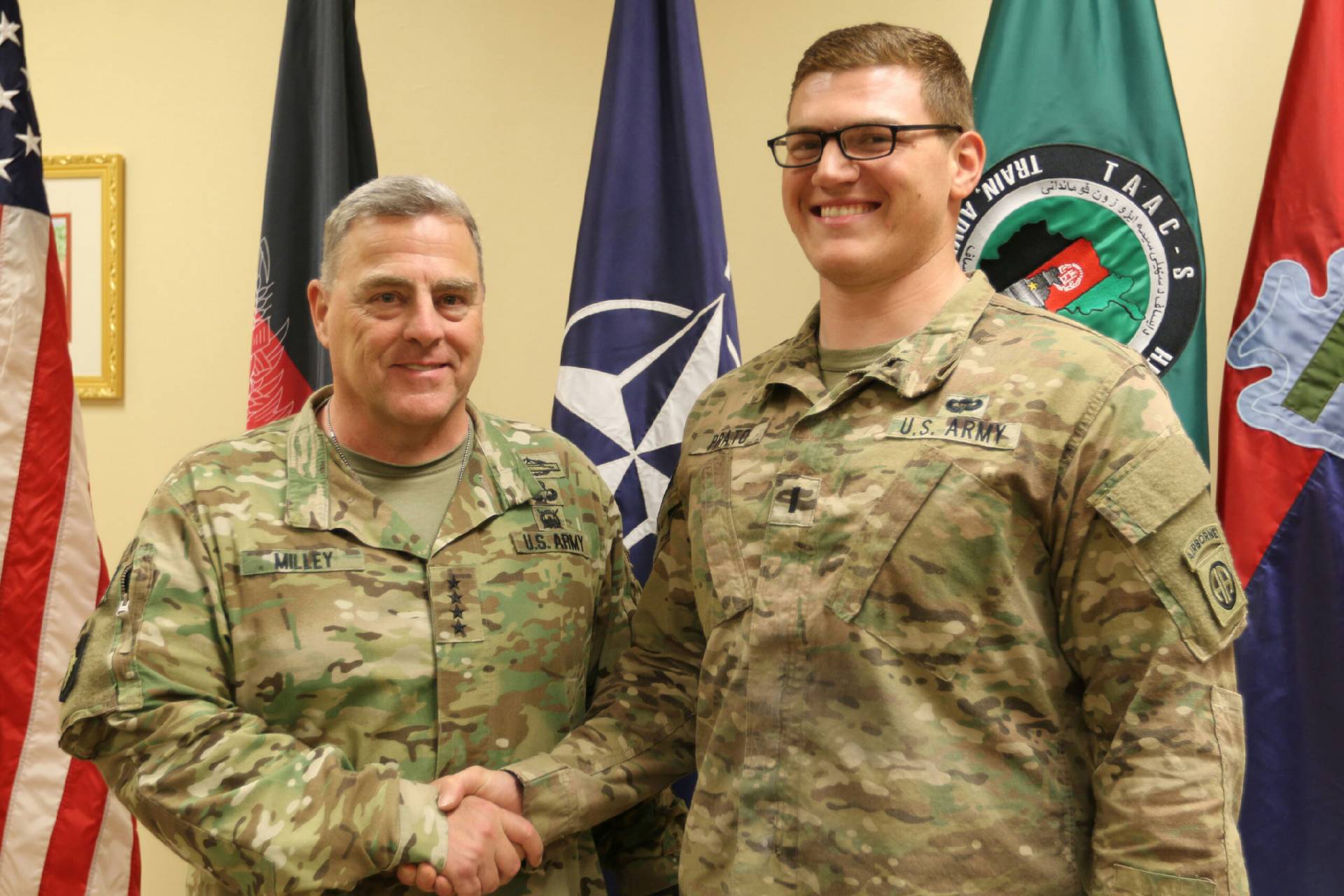 I was in Kandahar, Afghanistan, with the 127th Airborne Engineer Battalion, 1st Brigade Combat Team, 82nd Airborne Division. I had just been made platoon leader of the fourth platoon ODIN company, which was being reassigned to do route clearance — keeping the roads clear in the ground defense area surrounding the airfield in Kandahar for other platoons that were following about 10 minutes behind us. We were attacked by a suicide vehicle-borne improvised explosive device that targeted my truck and caused my injuries, including nearly severing my spine.

Is there something you wish people knew about your experience?

A few months after I was injured, I definitely saw the impermanence of life in a very real and concrete way. It changed my mind about a lot about the fears that I had of failure and trying to create the perfect future. I would say that paralysis or inaction for fear of failure is extremely dangerous and can prevent you from some of having some of the best experiences you can.

Lots of Princetonians have connected with you to show their support. What has it mean to you to hear from and see these folks?

The greater Princeton community — my classmates, students and faculty from my major, the football program, the ROTC program — all rallied around me and reached out to me. I felt very cared for and very appreciated. I definitely thought I was part of something bigger that was very important to me at the time. Even though the idea of quitting never crossed my mind I always knew that there was no way that I could give up with all these people who said that they were counting on me and were inspired by me at Princeton and after the attack.

On June 8 — after five hospitals, multiple surgeries and being a patient for 206 days — you were discharged and visited your parents' home in Somers Point, New York. What was the first "ordinary" thing you did on that visit?

The first thing I did when I got home was take a nap on a normal bed. I think my permanent home will always be near my family in the Northeast. As I'm still undergoing outpatient therapy at the VA in Tampa, I have an apartment in that area.

Who inspired you to lead a life of service and what does service mean to you now as you look ahead?

In addition to my grandparents, my father and my uncles, there are a lot of historical figures that I also look up to: George Washington, Teddy Roosevelt, Abraham Lincoln. I also remember specific quotes that I have used to shape my life like Martin Luther King Jr., who once said: "If a man has not discovered something that he will die for, he isn't fit to live."

Shaped by these ideas through my childhood, it was very important that I serve my community and my country but I recognize that there's lots of different ways to do that and that military service is certainly not the only way. Because of that I believe that even though I can no longer serve in the military, I will not stop serving and that will continue to be an important part of my life.

A condensed version of this story appears on Princeton's #TellUsTigers Instagram series and Facebook page, garnering thousands of "likes" and dozens of comments, some of which appear below. Prato's friend Zach Beecher, a member of the Class of 2013 and fellow ROTC cadet, created a Facebook page, Cheering for Victor(y), for friends, family and the greater University community to connect with Prato and show their support.