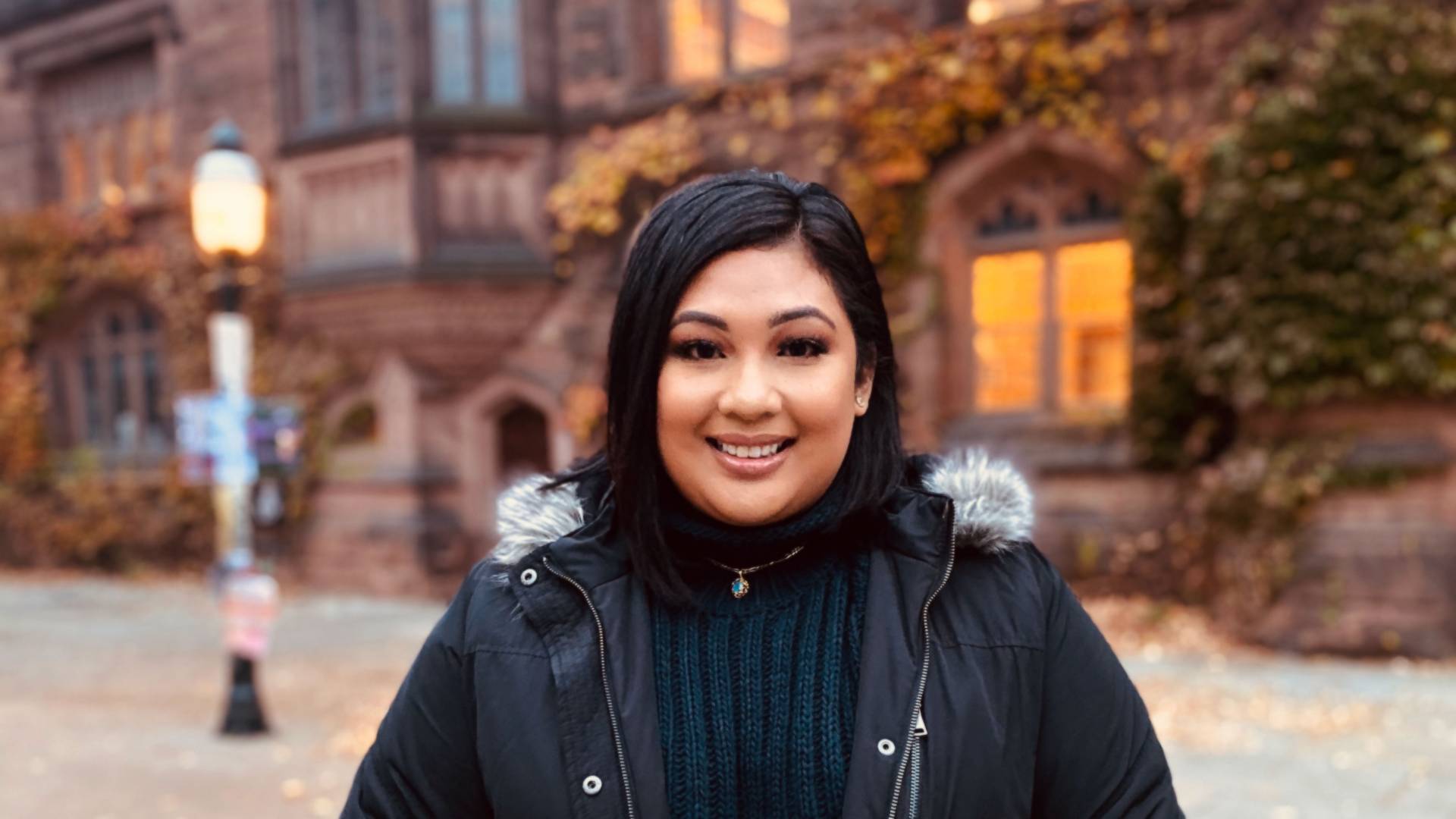 Clariza Macaspac, Class of 2023, reflects on her experience in the military, overcoming the challenges of her transition from community college to Princeton, and the support and camaraderie that she has found at the University.

​Clariza Macaspac, a member of the Class of 2023, joined the Navy at age 21. In the Navy, she learned Spanish and served for seven years as a cryptologic technician interpretive (CTI). CTIs are the Navy’s linguists — the language and cultural experts of the intelligence field. Her first assignment was as an air crew linguist in San Antonio, Texas, and her last assignment was as a military language instructor and an academic adviser to over 100 sailors at the Defense Language Institute in Monterey, California.

A native of Manila, Philippines, she immigrated at age 11 with her parents and younger sister to Sacramento, California. After leaving the Navy in August 2017, Macaspac began her studies at San Jose City College before transferring to Princeton. She is the first in her family to attend college in the United States.

In honor of Veterans Day, Macaspac reflects on her transition from military to student life. A condensed version of this story appears on Princeton’s Instagram as part of the #TellUsTigers series.

What does Veterans Day mean to you?

Veterans Day is a day to honor the experiences and sacrifices of veterans — both living and those who are no longer with us. The military affects the lives of veterans and their families in different ways, and it is important to acknowledge and celebrate the different ways they’ve contributed to our country. 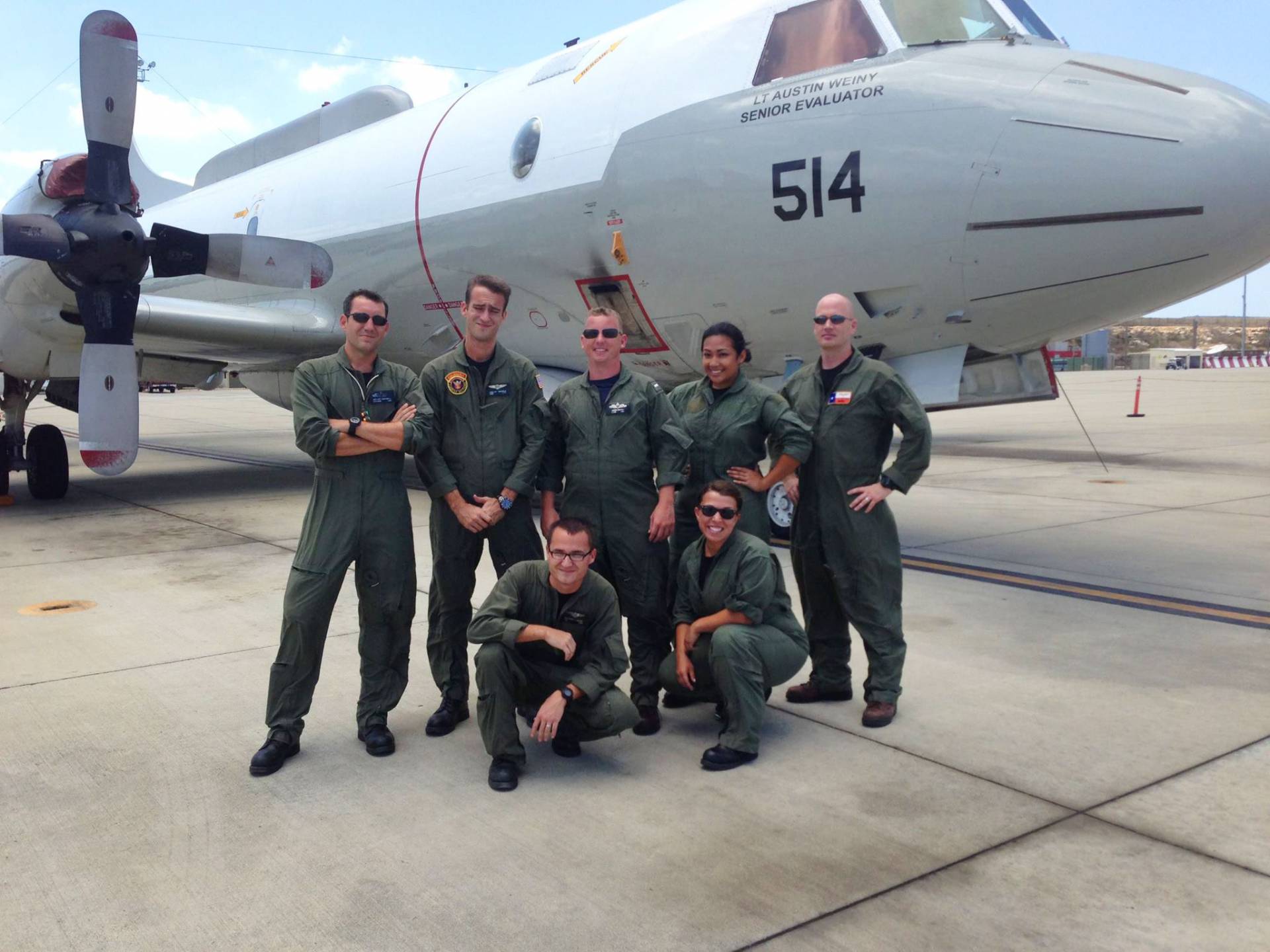 Macaspac (standing, second from right) posed with one of the air crew divisions she worked with in 2013.

What’s something you learned in the Navy that you carry with you every day as a student?

My first few years in the Navy were extremely challenging for me. I struggled a lot with my health, both physically and mentally. This affected my work, which reflected poorly on me at times. I often felt alone, as if no one understood me. Luckily, there were people who treated me with compassion and took the time to understand me, which allowed me to thrive.

As I moved up the ranks and became a leader myself, I promised to always try to see the individual behind the uniform and to show compassion through listening and paying attention. We never know what people are going through, and to this day, I continuously work on my compassion and understanding towards others. During my time in the Navy, I also became a huge proponent for mental health and seeking therapy, especially as it affects the military and veteran community. As a Princeton student, I believe it is equally important to show compassion and pay attention to the behaviors of our friends, especially as we go through the stress of virtual learning during the pandemic.

Would you share an aspect of your military experience that was unexpected?

I was told that joining the military was “the easy way out” — because the military provides for the basic needs of its members. I received a paycheck twice a month, had medical and dental insurance, ate three meals daily and always had a roof over my head. While those made my life easier, I still experienced the unique struggles and sacrifices that a lot of members of the military encounter. Something people don’t often talk about is the fact that being in the military comes with a lot of uncertainty — not knowing when we’ll see our family again, not knowing when and where we’ll be deployed to and, for a lot of people, not knowing if they’ll come home safely. 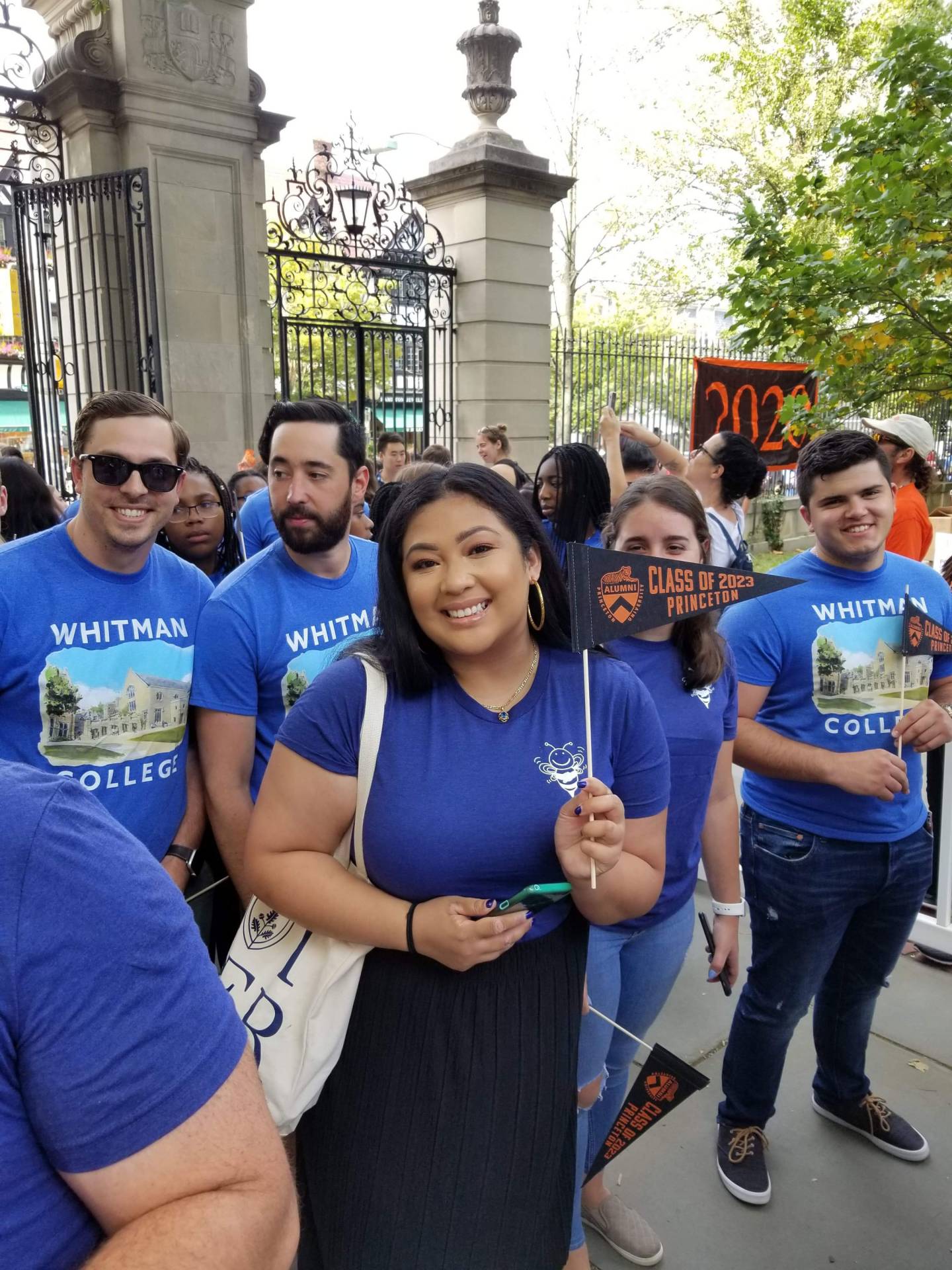 Macaspac joins the members of her transfer cohort in the University tradition of formally entering the University through FitzRandolph Gate during Opening Exercises on Sept. 8, 2019.

What was your path to Princeton as a transfer student from a community college and a veteran?

At San Jose City College (SJCC), I learned about Service2School — a mentorship organization that prepares transitioning service members and veterans for their next chapter of leadership by helping them gain admission to the best college or graduate school possible.

Lila Chiem, my veteran adviser at SJCC, and my mentors at Service2School kept me motivated throughout my application process as a transfer student. At a Service2School summit in San Francisco, I learned how it was possible to attend a top university and I also heard one of Princeton’s student veterans speak.

I was particularly drawn to Princeton because of the opportunity for independent research and the freedom to explore with the junior paper and senior thesis, the University’s generous financial aid program, and the many ways Princeton takes care of veterans. Housing was a major concern for me, and it was a huge relief to know that Princeton was going to allow me to stay in the dorms. Additionally, I knew that my husband was going to be stationed on the East Coast, and being at Princeton would allow me to be able to see him on a regular basis. Princeton had everything I was looking for. My Service2School mentor Jim Selbe introduced me to Alex Bustin, senior associate dean and director of transfer and military/veteran admission and a 2008 alumnus — and the rest is history.

Would you share a story from your time in the Navy that has helped you tackle being a Princeton student?

When I was a young sailor, I wanted to challenge myself by seeking the most difficult assignment I could find. I’d heard about the opportunity to volunteer for air crew duties, which requires a rigorous and lengthy training, including water survival. I knew in my heart that I’d barely passed my swim test during boot camp, and that I was a little afraid of the water. But I wanted to be cool, so I volunteered. I taught myself basic strokes to pass the initial swim test and to get over my fear of the water. But none of that was enough to pass the mile swim and the helicopter crash simulation, where I had to escape upside down with blacked-out goggles!

I made it through and passed all my swim tests. To this day, every time I think I can’t do something at Princeton, I think about how I went from being afraid of the water to swimming a mile in a month’s time. 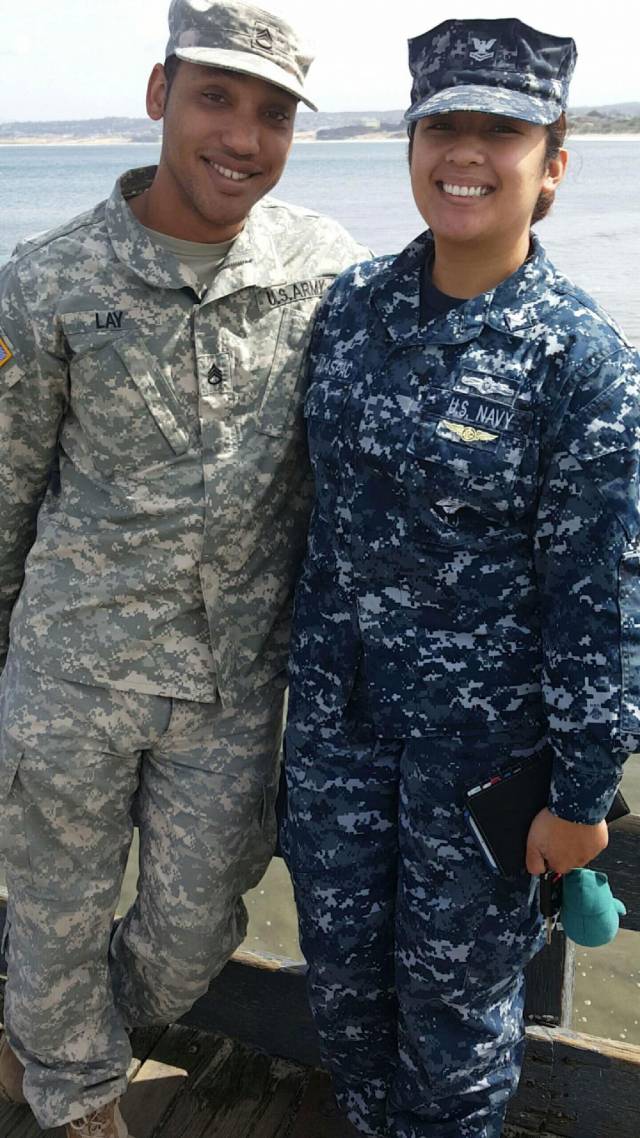 Macaspac, pictured with her husband, Kristopher Lay, in Monterey, California, in 2017, said she was drawn to Princeton for many reasons — including the opportunity students have to explore and pursue independent research for their the junior paper and senior thesis, the University’s generous financial aid program and the many ways Princeton takes care of its student veterans.

What would you like people to know about your transition from the military to student life at Princeton?

The academic transition from community college to Princeton was a huge challenge for me. Living apart from my husband and from my family made it even more difficult. Excelling in community college helped me regain my confidence in my academic abilities, but my first semester at Princeton made me question if my success was a fluke. I often felt like I was the one person who was accepted by mistake, but it was comforting when I slowly realized that the transition to Princeton is a challenge for a lot of students. It was good to know that I wasn’t alone.

How have you found community at Princeton?

My transfer cohort — veterans and non-veterans — really helped me get through the first semester. And Keith Shaw, director of transfer, veteran and non-traditional student programs, guided us from the day we were accepted. Additionally, I became friends with a lot of students in the Scholars Institute Fellows Program (SIFP), which was launched in 2015 to empower undergraduates, particularly those from first-gen and low-income backgrounds, to thrive at Princeton. I met SIPF students during my orientation and in my SIFP chemistry precept. I also found community as a member of the student dance group RAQS. 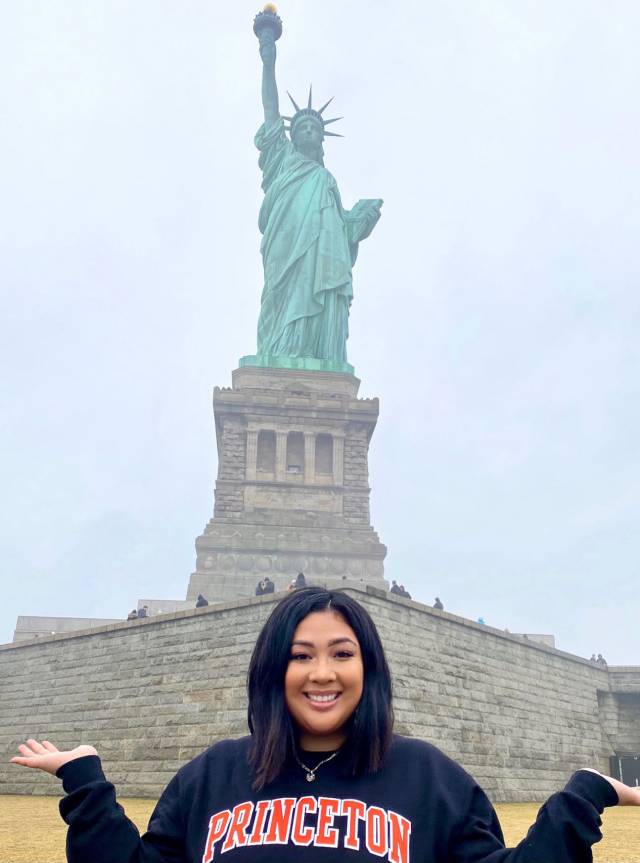 Macaspac, a native of Manila, Philippines, whose family immigrated to Sacramento, California, when she was 11, said: "Even though I proudly identify as a veteran, being an immigrant and first-generation college student in the US has always been the biggest part of my identity."

How has your family’s experience immigrating to the US shaped your identity?

The move came with a lot of mixed feelings. On the one hand, we knew we’d have more opportunities for our future. On the other hand, we were leaving behind our entire lives, people we loved and a way of life that always found happiness despite the struggles. We were leaving behind the culture of community — being able to go outside and talk to our neighbors in our intimately spaced street.

In Sacramento, I witnessed my parents relearn how to function in a completely different society. From finding our own place to live, to being more comfortable with the language, to the small differences we didn’t think about (like eating with a fork instead of a spoon), I saw my parents overcome it all.

Even though I proudly identify as a veteran, being an immigrant and first-generation college student in the US has always been the biggest part of my identity. It has brought me close to people with the same experiences, regardless of what country they came from. I also developed a passion for cultures and languages, which helped me as a linguist in the military and carries me forward with the hopes of connecting and helping underserved immigrant populations in my future career.

What have been your favorite classes so far at Princeton?

My favorite classes have been my Spanish and Portuguese classes. When I got to Princeton, I’d already lost some of my Spanish proficiency due to lack of practice. But the Spanish and Portuguese classes allowed me to not only regain some of my proficiency, but also to pursue my passion for language learning again. I also love the small sizes of the classes and the opportunity to interact with my classmates and professors on a regular basis.