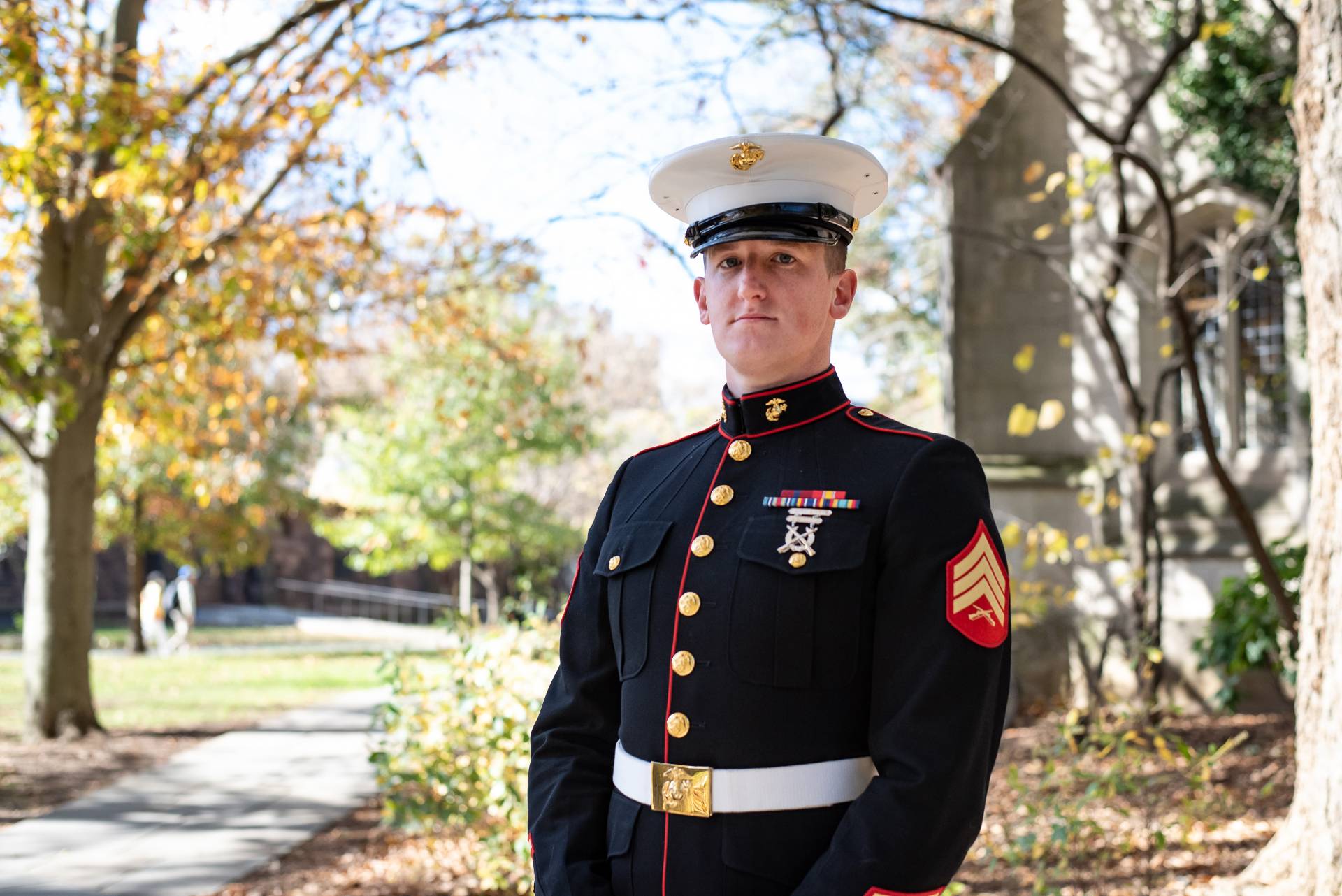 Christopher Wilson, a member of the Class of 2021, reflects on his experience in the military, his transition from “boots to books,” and the support and community that he has found at Princeton.

Photo by Felicity Audet, Class of 2021

Christopher Wilson, a member of the Class of 2021, applied to Princeton after serving as an E5, a sergeant, in the United States Marine Corps, where he was deployed to Kuwait and Bahrain as a ground radio technician.

He and his husband, Raymond, and their two cats moved to Princeton from Camp Pendleton in California, where Wilson had met a Princeton admission officer who explained that the University was eager to welcome students who had taken a nontraditional path. An art and archaeology major, Wilson said he has found community at Princeton as a member of the heavyweight rowing team since his first year and with the Princeton Student Veterans Alliance, founded by his classmate Tyler Eddy, also from Camp Pendleton.

In honor of Veterans Day, Wilson reflects on his transition from military to student life. A condensed version of this story appears on Princeton’s Instagram as part of the #TellUsTigers series.

Wilson and his husband, Raymond Gonzales, enjoy the festivities at a Princeton event.

What does Veterans Day mean to you?

What’s something you learned as a Marine that you carry with you every day as a student?

One of the most important things I learned while in the Marines was being grateful for what you are given. I did not grow up with much and had to work hard to help support myself and my family. Being the one of three children of two Navy chefs, money was often tight. When I joined the Marines, I was given three meals a day, a bed to sleep on, a roof over my head, and some money I could put in a savings account. I saw people fruitlessly waste so much of what was given to them, sometimes to addiction or alcoholism, and I swore never to be like that. This lesson has remained with me to this day. I am so grateful for everything Princeton has given me and allowed me to experience.

What would you like people to know about your transition from the military to student life at Princeton?

As a gay married Marine, I had many fears of coming out to people. After being called derogatory names, I lost trust in most of those around me. I struggled greatly in learning to accept myself and once again trust those around me. Eventually, I decided not to care anymore what others thought of me and to stand up for myself. In my transition from boots to books, I had similar fears but figured that the communities of Princeton University would be more accepting and educated than those of the military, and I was right. Since arriving here, everyone has been not only accepting but involved, caring and respectful, not only of my sexuality, but my being a veteran as well. The staff and faculty of the University have been very supportive of my academic efforts. They have also listened to issues my husband and I have had and have tried to be as accommodating as possible. 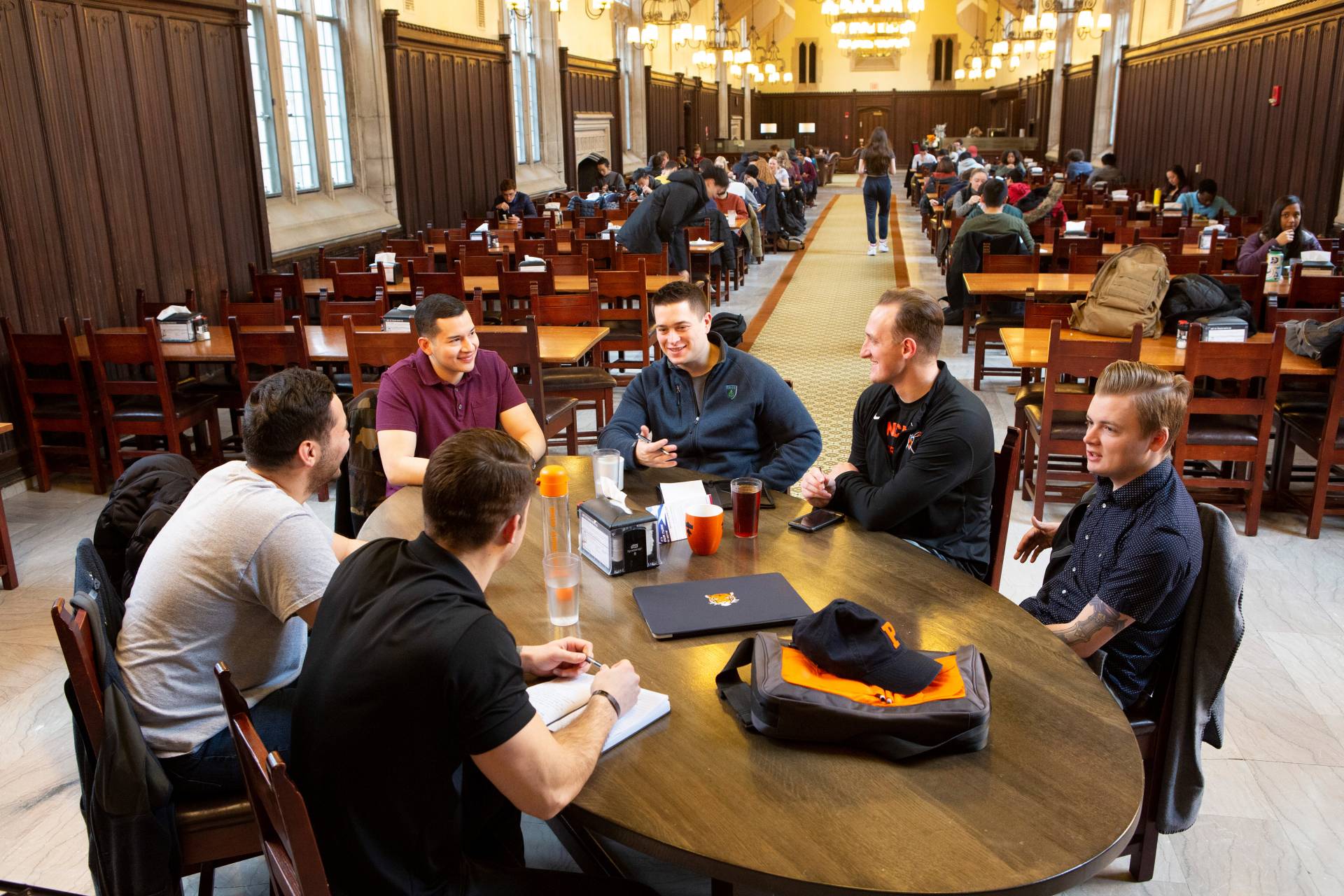 Wilson and fellow members of the Princeton Student Veterans Alliance get together in Rockefeller College dining hall.

How have you found community at Princeton?

My fellow rowing mates and coaches have given me a community of new friends and acquaintances who involve me in social events. However, the most supportive, understanding and helpful community at Princeton has been the veteran community. My fellow veterans and their families have been there for me since before my arrival to Princeton. They have given me what I know will become lifelong friendships for both my husband and me, allowed me to acclimate back into civilian life, and inspired me to take chances and be the best that I can be.

Wilson has been a member of the heavyweight rowing team since his first year at Princeton.

What was it like growing up in a military family?

My parents, who both served in the Navy, are strong advocates for military service and a huge reason my brother and I decided to serve our country. My mother served four years as a cooking specialist. My father was a master chef and served for a full 20 years. He was, and still is, an amazing chef. He even worked in the White House for a short while. My brother enlisted as an officer in the Air Force in 2016.

What has been your favorite class so far at Princeton — in your major and outside of your major?

My favorite class at Princeton has been “Archaeology in the Field,” a summer course in Greece with Nathan Arrington, associate professor of art and archaeology. I participated in an archaeological dig at a site believed to be the ancient city of Stryme. Outside of my major, my favorite class has been my writing seminar. My instructor, Emma Ljung, not only taught me how to succeed at Princeton, she also inspired me to peruse archaeology, and I wouldn’t be where I am now without that class.

What advice do you have for prospective students in the military who are considering applying to Princeton or any college?

The best advice I can give to prospective students in the military who are thinking of applying is to not sell yourself short and simply go for it! Apply to the best colleges out there, not just Princeton. Schools around the world know that you have experiences, ideas and beliefs that are valuable. Many military members may not think they have what it takes to get into a school like Princeton, so they don’t even attempt an application. You never know where you will end up; I didn’t. Aim as high as you can. It’s like that saying: Aim for the moon — if you miss, you will still be amongst the stars!