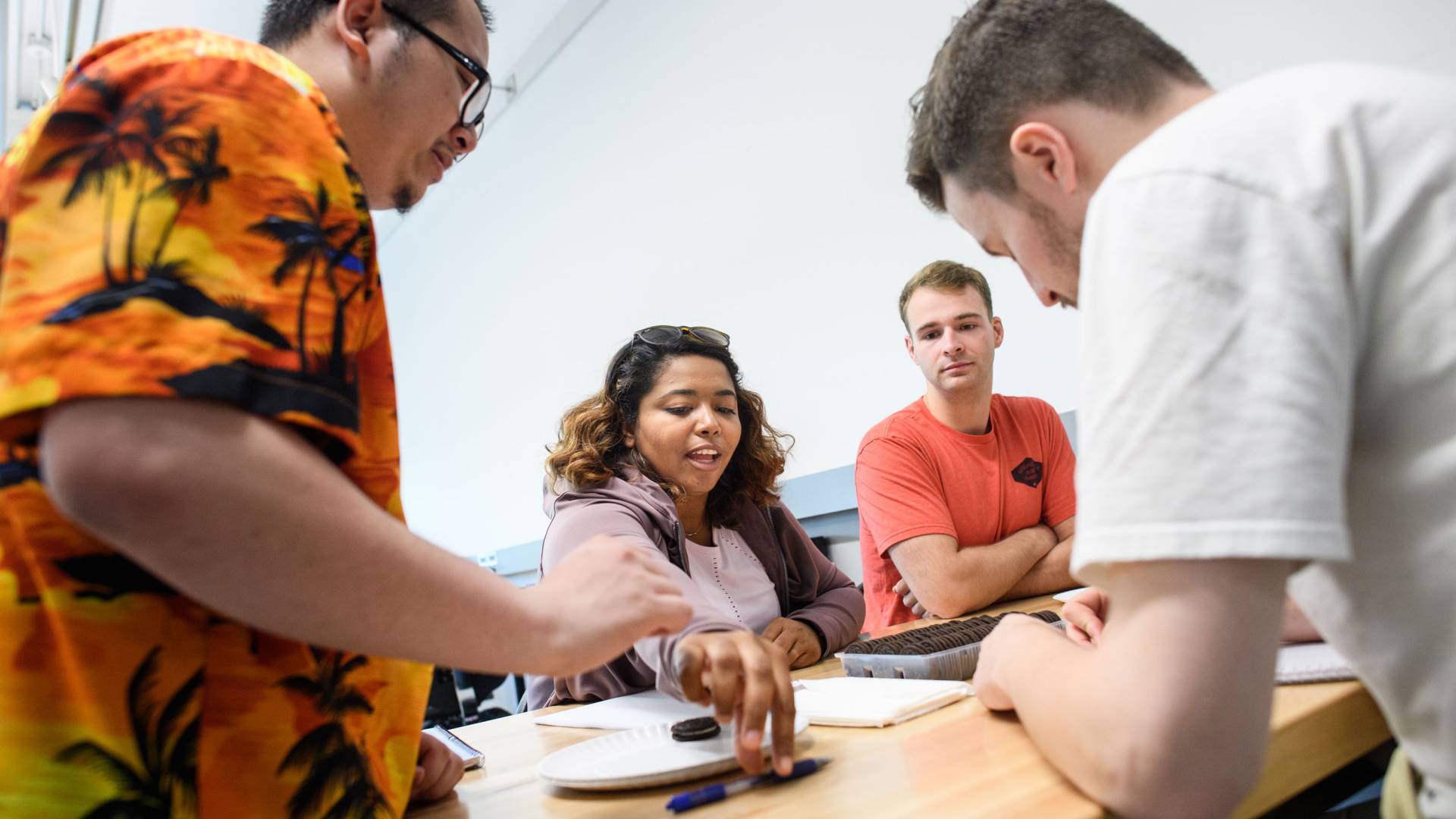 The last math class Jazzmen Blackwell took before enlisting in the U.S. Navy was high school Algebra II. Now, at age 24 and ready to return to civilian life, she knows she needs to catch up with her studies and get back into an academic mindset.

“The hardest thing was not being in a school environment for so long,” said Blackwell, who served as a quartermaster aboard the USS The Sullivans and earlier this year began taking college classes at Queens University of Charlotte. “You want to be successful. You don’t want to fail.” 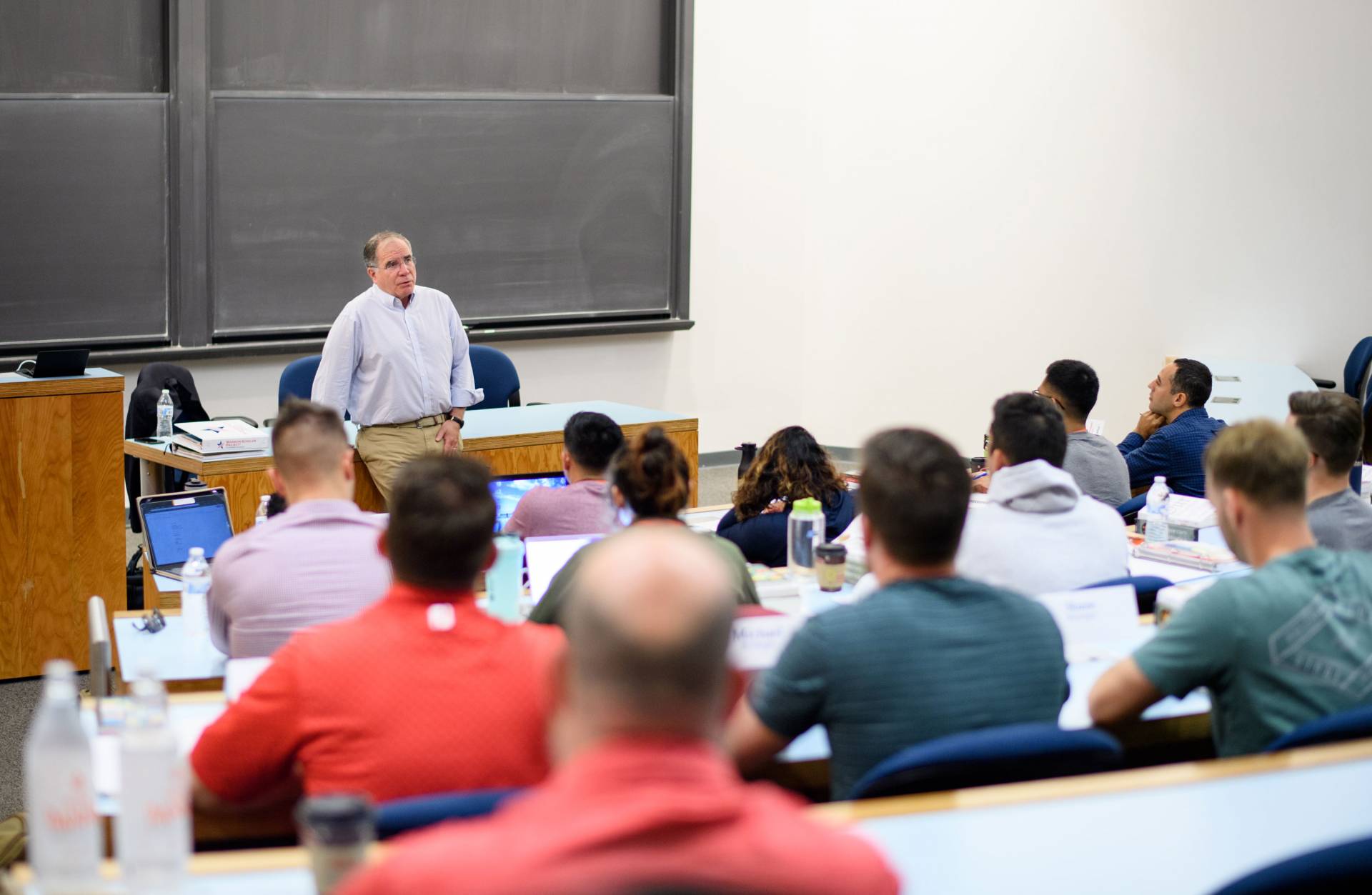 Miguel Centeno, the Musgrave Professor of Sociology, teaches a seminar on the "Declaration in Context." Democracy was chosen as a theme for the first week of the program, in which the Warrior-Scholars learned techniques for studying texts at the college level and also brushed up on their writing skills.

Blackwell was among 15 military veterans acclimating themselves to the rigors of college life from June 9-23 at Princeton University as part of the Warrior-Scholar Project. The current and prospective undergraduates spent two weeks attending classes with Princeton faculty and instructors and learning the hard and soft skills that will smooth their transition from soldiers to students.

“Warrior-Scholar Project meets veterans at an all-too-critical transition point, and our rigorous academic boot camp exposes them to analytical reading, writing and study skills, giving them the confidence and skillsets to hit the ground running their first day on campus at our nation’s top colleges and universities,” said Maura Sullivan, CEO of the Warrior-Scholar Project. “Princeton University has been a strong partner in this endeavor. We are grateful for the University’s steadfast support and continued commitment to veterans.” 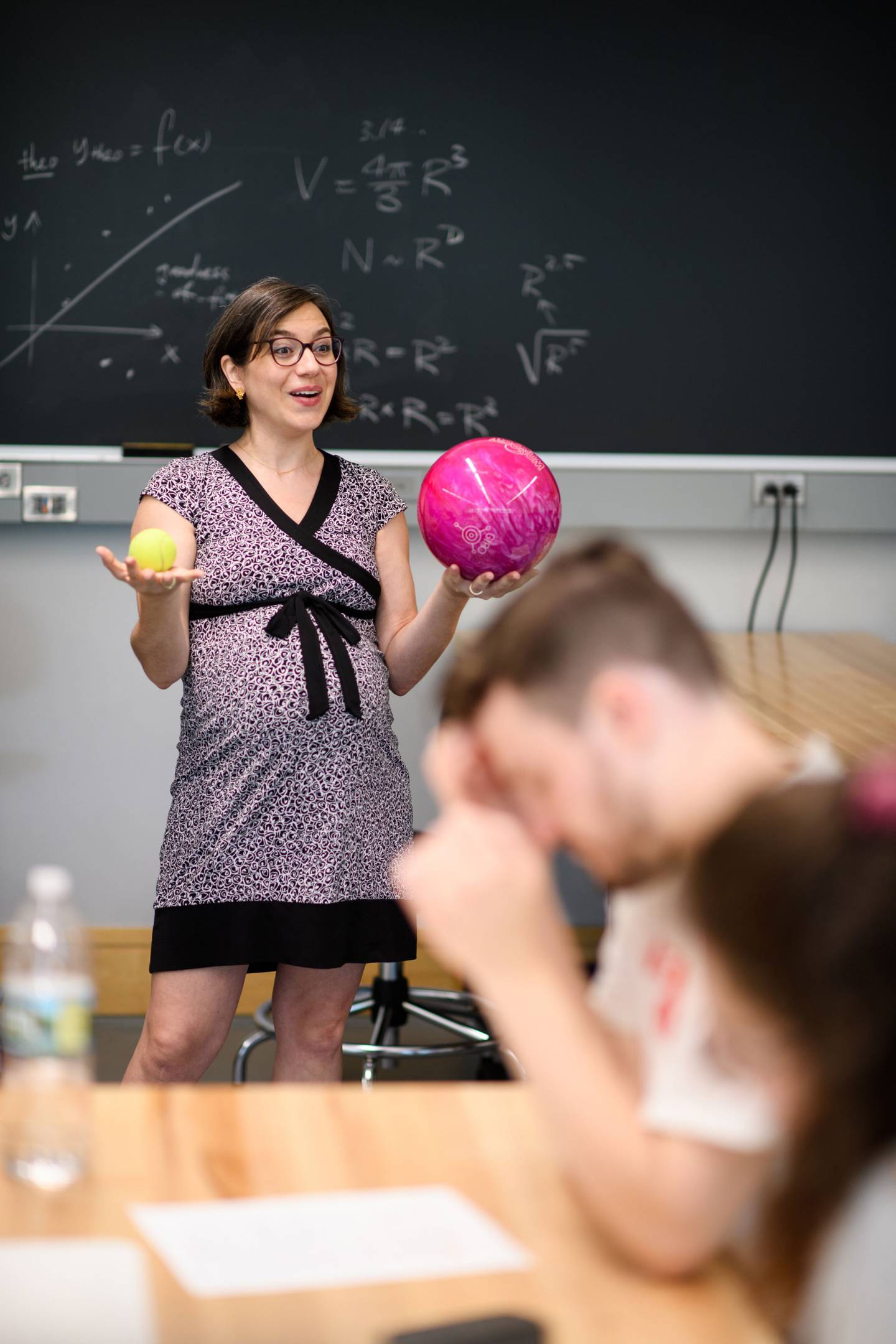 Katerina Visnjic, a senior lecturer in physics, uses a tennis ball and bowling ball to demonstrate how forces act upon objects. Through lectures and labs over the course of the program’s second week, participants learned the equivalent of a month’s curriculum, preparing them for the expectations of an undergraduate science class.

Princeton is one of 18 colleges and universities hosting the Warrior-Scholar Project this summer. This is the third year Princeton has paired with the program.

In their first week, participants were introduced to the humanities and exercised their writing skills through a mini-course centered around the theme of democracy.

The topic is “something most of the students have access to and are familiar with,” said Keith Shaw, director of transfer, veteran and non-traditional student programs in the Office of the Dean of the College.

Shaw taught two of the humanities seminars and co-taught daily writing workshops. Readings covered the American Revolution and founding, Reconstruction, the Cold War, and the Greek origins of democracy.

“We’re trying to get them to use those texts as an opportunity to make nuanced arguments regardless of what they’re going to major in,” Shaw said.

The second week of the program focused on STEM studies. Katerina Visnjic, a senior lecturer in physics, led the participants in a series of lectures and labs covering a month’s worth of academic work.

Visnjic said her primary aim was to help students understand the difference between the rote learning necessary for high school achievement and the synthesis of information required at the college level. Studying hard and memorizing, she explained, are not enough.

“They need to learn how to learn in college,” she said. “In college, they have to be creative and put the pieces together themselves.”

As former soldiers or active duty service members who plan to separate from the military within the next two years, the participants bring a unique perspective to their studies and have much to offer in class, though many of them tend to doubt their own abilities, said Jesse Tossetti, director for outreach and admissions for the Warrior-Scholar Project.

The participants benefit from performing the work, which builds confidence, and from engaging with their peers, he said. Former participants act as fellows to the program and current undergraduate veterans at Princeton also work one-on-one with the Warrior-Scholars as tutors.

“It’s peer examples that show them it is possible,” Tossetti said. “They see they can get to that level through hard work.” 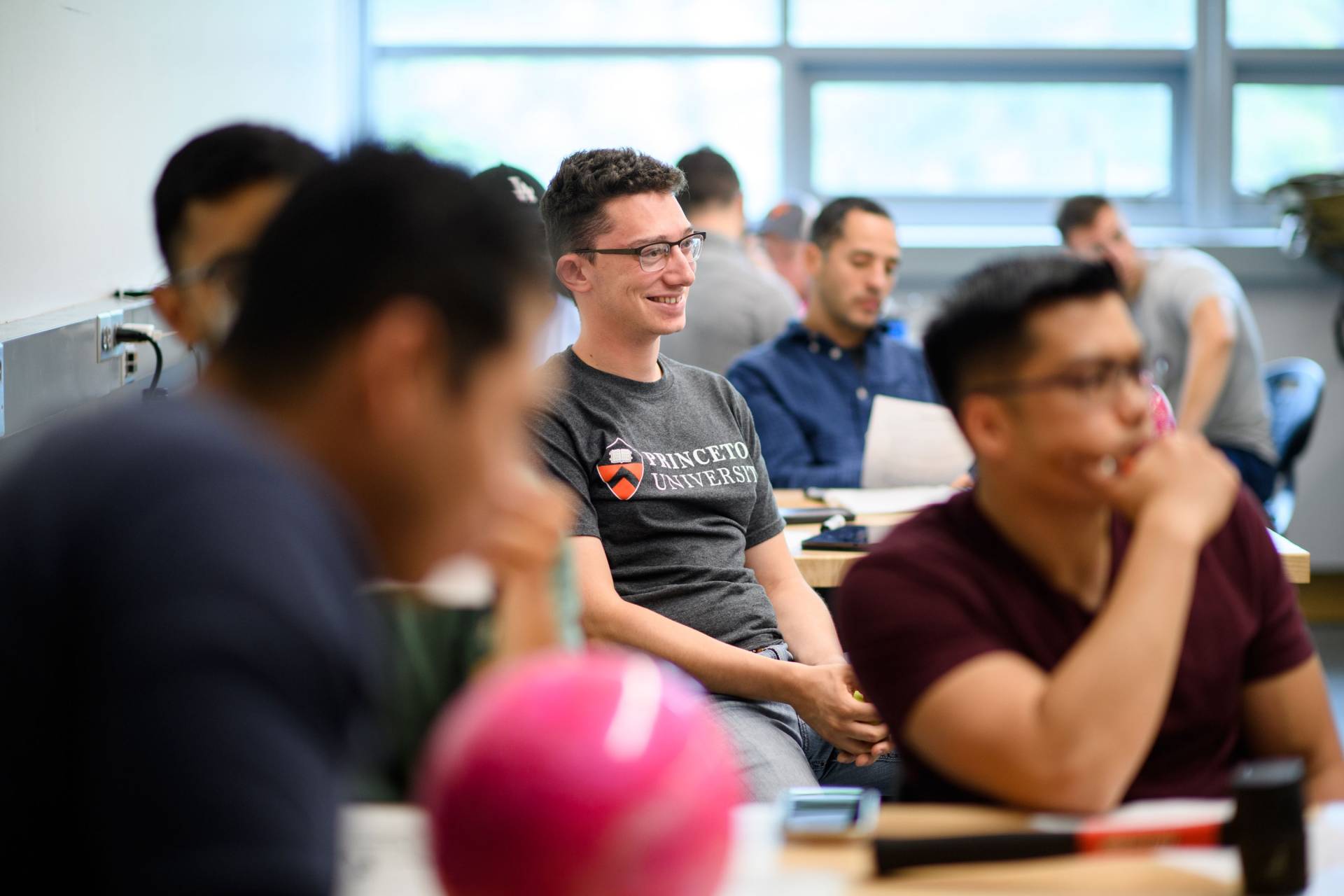 David Piegaro, center, a U.S. Army intelligence analyst, listens attentively to Visnjic’s lab presentation. Piegaro, who has been accepted to Princeton and is deferring his admission until 2020, said he is grateful for the opportunity to ready himself for the academic opportunities he will have as a student.

Piegaro said participating in the Warrior-Scholar Project before recommencing his studies helped him gauge his skills in writing, math and science. He has been accepted to Princeton, deferring his admission until 2020.

“I wanted to see the campus, meet some professors, dip my toe in,” he said. “Before you dive into a pool, you want to test the waters.”

“I forgot how much work it is,” he added. “And this is pretty condensed, too.”

Rhiannon Freitag, an expeditionary intelligence specialist in the U.S. Navy, said she applied to the Warrior-Scholar Project to familiarize herself with the demands of a high-level academic setting. She plans to attend college to study ecology and evolutionary biology or environmental science.

“The classes have been awesome,” she said. “I’d say they’re that sweet spot just outside my comfort zone where it’s a challenge and I can learn, but it’s not impossible, or too, too much. I think that’s something a lot of veterans are probably thinking about when considering elite colleges: Am I going to be able to keep up?” 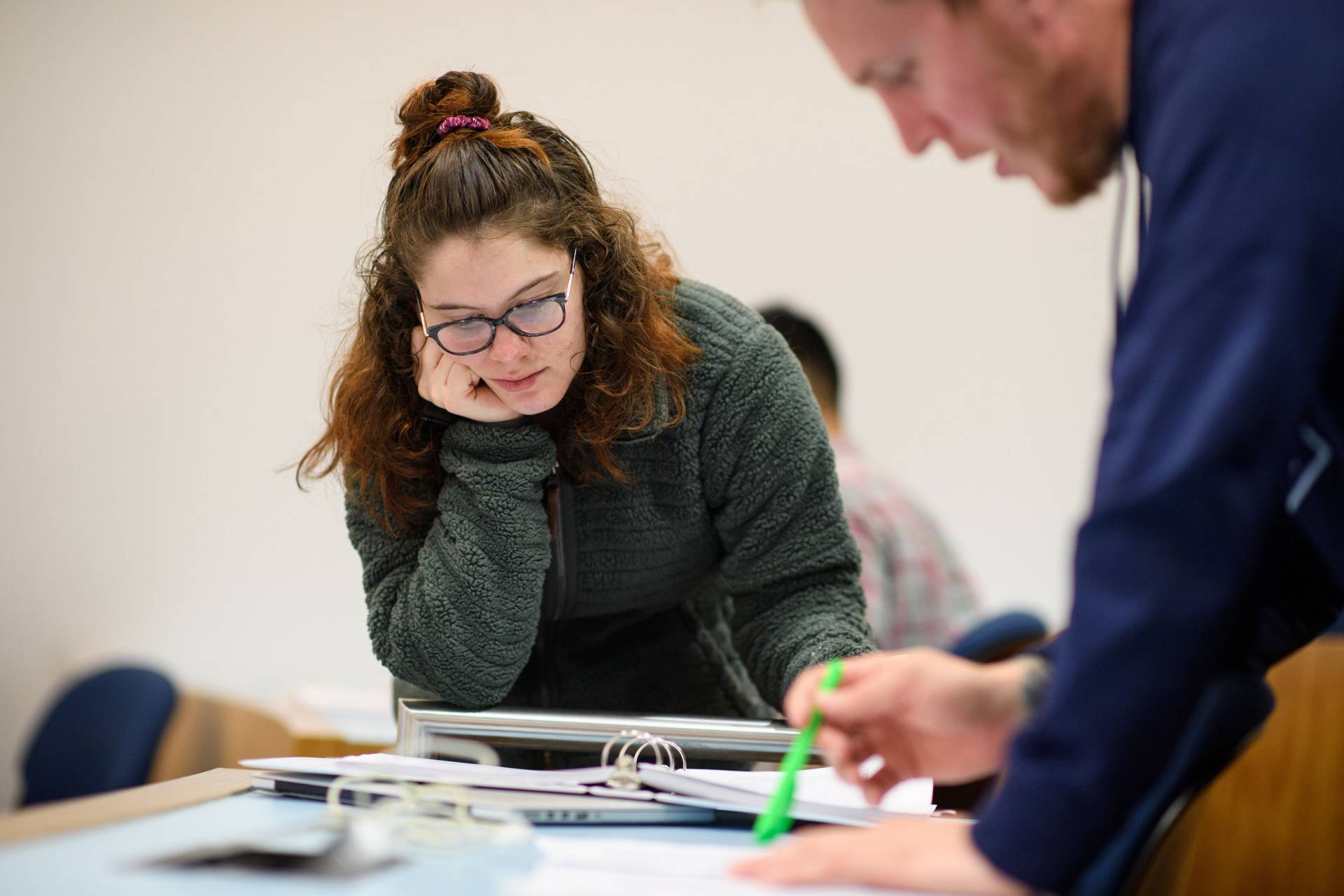 Rhiannon Freitag, a U.S. Navy expeditionary intelligence specialist who has taken only a few online college courses since graduating high school, reviews her class notes. After participating in the Warrior-Scholar Project, she plans to apply for undergraduate programs in ecology and evolutionary biology or environmental science.

Freitag said she’s been most appreciative of the close-knit system of support she’s found among the program’s leaders and participants. She’s also learned how to become a better student.