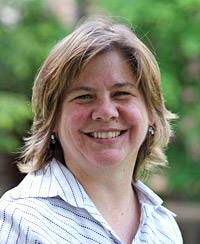 Lianne Sullivan-Crowley, a human resources professional with 20 years of experience in higher education, has been named vice president for human resources at Princeton University. Her appointment is effective Aug. 1, 2005.

For the past three years, Sullivan-Crowley has served as executive director of human resources and administrative services at Smith College in Massachusetts, where she has worked since 1998. From 1985 to 1998, she held positions in employment and in labor relations at Harvard University.

"Lianne has an excellent track record in improving human resources services," said Mark Burstein, vice president for administration. Sullivan-Crowley will report to Burstein, who is slated to become executive vice president on July 1. "She has transformed Smith's Office of Human Resources so that it is considered a true resource by those who work at the college. She also is an outstanding manager, not only training other staff members how to supervise but providing an exceptional model through her own leadership."

Sullivan-Crowley was selected following an extensive process involving an external search firm and an internal search committee. Burstein said those conducting the search were impressed with her ability to connect with all levels of employees, from executives to frontline staff members, and with her commitment to diversity.

"I am honored to be joining Princeton University," said Sullivan-Crowley. "I look forward to working collaboratively with all of the members of the Princeton community to help further President [Shirley M.] Tilghman's vision of bringing the services and support available to staff and faculty to the next level of excellence."

A graduate of the University of Massachusetts-Amherst, Sullivan-Crowley holds a law degree from Suffolk University Law School. She began her career at the Sheraton Corp. in Boston and, after two years, joined Harvard as a consultant and staffing representative in the employment office in 1985. Four years later, she was promoted to manager of the employment office.

In 1990, she began working in labor relations at Harvard as a consultant and then assistant director. She served as associate director of employee and labor relations from 1996 to 1997.

Sullivan-Crowley joined the Smith staff as director of human resources in 1998, managing employment, organizational effectiveness development, training, employee and labor relations, and compensation and benefits. She was promoted to a member of the president's senior staff in 2000 and then promoted again to her present post two years later, adding rental properties and the college bookstore to her human resources responsibilities.

Sullivan-Crowley and her partner, Julie Sullivan-Crowley, have two daughters. She will succeed Maureen Nash, vice president for human resources from 2003 to 2004. Princeton's Office of Human Resources provides services to the University community in the areas of employment, compensation, benefits, work/life balance, employee and labor relations, training, human resources information systems and organization development.