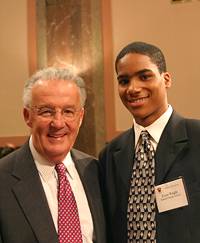 U.S. Sen. Paul Sarbanes (left), who hosted the May 24 reception for Washington, D.C.-area winners of the Princeton Prize in Race Relations, met with co-winner Evan Wright, a junior at Sidwell Friends School in Washington. Sarbanes is a  member of Princeton's class of 1954 and a University trustee.

Eight high school students in five cities -- Atlanta, Boston, Houston, St. Louis and Washington, D.C. -- have been awarded the 2005 Princeton Prize in Race Relations for their exceptional efforts to improve race relations in their schools and local communities.

The Princeton Prize in Race Relations is an awards program that recognizes high school students for outstanding work in their schools or communities to advance the cause of race relations. The program was created by Princeton University alumni and launched in 2003 in the Washington, D.C., and Boston metropolitan areas. This year, it was offered in Houston, Atlanta and St. Louis, and next year will begin in Chicago, Los Angeles, Philadelphia and San Francisco. Ultimately, the goal is to expand the program nationwide.

Winners were chosen by committees including Princeton alumni in each city, as well as University administrators and undergraduates. Individual prize winners received $1,000, while co-winners received $500 each. Prominent figures in politics and civil rights have participated in this year's award ceremonies as presenters and speakers, including: U.S. Sen. Paul Sarbanes and U.S. Sen. Barack Obama in Washington; U.S. Rep. John Lewis in Georgia; and Mayor Bill White in Houston.

"The work being done by these young people to enhance race relations in their schools and communities is incredibly impressive and inspirational," said Margaret Miller, director of Princeton's Alumni Council. "It is gratifying for Princeton's alumni committee members to be able to give these students well-deserved recognition for their creativity, persistence and spirit."

The following is information on the Princeton Prize recipients for each city.

Claudia Caycho, who moved to the United States from Peru as a teenager, has demonstrated tireless dedication to helping the Hispanic student body at Norcross High School become more involved in the school and local communities. She founded "La Voz" ("The Voice"), a student organization with 500 members. School administrators credit La Voz with helping reduce gang activity and increasing the number of Hispanic students involved in athletics, community service and literacy programs.

Caycho also is president of the Hispanic Leadership Roundtable, which helps Hispanic students find out more about college applications and scholarships. She writes for the school newspaper in both English and Spanish and is a tutor for ESOL (English for Speakers of Other Languages) students. She also participates in Norcross High's diversity committee and represented the school at the Gwinnet County Peer Leaders Conference and the National Youth Leadership Forum on Defense, Intelligence and Diplomacy.

Stinson also led the development of a multicultural mural that now covers an 81-foot-long wall at the entrance of the school. Through the ROPES club, she and other students devised a plan to create a mural to depict the diversity of the Riverwood student body. More than 300 students, staff, parents and community members took part in the project under the direction of Irish artist Gerard Mo Chara Kelly.

Tatiana Maria Fernández has led, organized and participated in major activities promoting race relations and cultural understanding at Brookline High School since her sophomore year. Fernández co-founded the Latino Scholars and Mentoring Program, a group dedicated to closing the achievement gap between Latino and white students at Brookline High, and the Girls' Group, an organization through which senior girls talk with freshman girls from all racial and ethnic backgrounds about high school social life and how to make responsible personal and social choices.

Among many endeavors, she also has organized a discussion on affirmative action that was attended by more than 100 students; participated in her school's Brown vs. Board of Education Day; and helped to coordinate the annual Latino Culture Day sponsored by the Latino-American Club. Fernández also is an accomplished public speaker who has made presentations on substance abuse prevention to Brookline elementary school students and to members of a Brookline town panel.

Mark Fitzgerald has been a steadfast voice against intolerance and racial discrimination in his school and community. In March 2004, Fitzgerald was one of the first students to join Needham High School's new Civil Rights Team, founded by teachers concerned about rising racial tensions at the school and in the surrounding town. Fitzgerald was elected chair of the group.

Fitzgerald volunteered to serve as a high school peer facilitator for the Anti-Defamation League, a responsibility that has required 25 hours of training, weekly meetings before school and regular classroom visits to discuss racial and ethnic discrimination and prejudice within and outside of school. He also helped coordinate Needham High's Student Speak Out Assembly to raise awareness of racial and ethnic discrimination issues and arranged for a local news station to cover Needham High's efforts to eliminate prejudice and hate. He also is a member of the town of Needham's Human Rights Committee, a task force dedicated to promoting diversity and raising consciousness of racial issues.

Brittany Royal was recognized for her efforts to qualify Stratford High School as a "No Place for Hate" school under a program developed by the Anti-Defamation League. Stratford, which is in the Spring Branch Independent School District, has 2,100 students representing a broad spectrum of income levels and ethnic backgrounds.

Royal, who is a member of a volunteer program called Community Help and Advice for Teens, led the effort to recognize Stratford as a "No Place for Hate" school by planning a series of events and initiatives, including: a school-wide assembly featuring student speakers discussing the challenges and goals that they had regarding relationships between different ethnic groups at the school; a multicultural awareness day; a "Resolution of Respect" for students to sign; and a pep rally celebrating the performing arts of different cultures and presenting dramatic vignettes on the importance of acceptance.

Paul Nauert leads a student group, the Lindbergh Liberal Union, that was formed during the 2004 U.S. presidential campaign. Following the election, Nauert redirected the political organization's efforts to focus on a diversity campaign to bring together members of the school and local communities.

The group's initiatives included: forming a partnership with the Friendan's United Church of Christ to organize, prepare, serve and celebrate a Thanksgiving dinner for residents of
one of the city's extremely low-income neighborhoods; launching a poster campaign at Lindbergh High School to promote diversity and multiculturalism; marching for racial equality and peace through downtown St. Louis on Martin Luther King Jr. Day; hosting a diversity forum for teachers and students to discuss the state of race relations at the school and the city's busing program; and planning forums on topics such as African Americans in the arts, Islam in America and discrimination against gays and lesbians.

Sarah Khasawinah, the student body president at Stuart High School, has been a force for improved racial understanding at her school. She founded a chapter of the National Conference for Community and Justice at Stuart and helped train the student members of the chapter to facilitate discussions about race and diversity. The group has sponsored numerous events to promote improved race relations, including a workshop on race relations involving parents, teachers, counselors and students, which will now become an annual event at Stuart.

Khasawinah also helped preserve the tradition at Stuart of holding an annual multicultural show in which students from 42 different countries participate. The program had been in danger of being discontinued this year for lack of a sponsor.

Evan Wright, co-president of the Black Student Union at Sidwell Friends, has worked to improve race relations at his school and at other independent schools in the area. As a result of his leadership, other groups at his school were invited to help produce and perform in the annual show put on by the Black Student Union intended to promote racial understanding. Wright also helped initiate and plan a diversity conference involving other independent schools in the D.C. area to promote a dialogue among different racial and ethnic groups at the schools.

In addition to his school activities, Wright is president of the youth group at the People's Congregational United Church of Christ in Washington, D.C. As co-chair of the church's annual Martin Luther King Jr. celebration, he invited Adas Israel Synagogue and the Masjid Muhammad Islamic Congregation to participate in a joint celebration. Wright's church now plans to hold more joint events in the future.