Twenty-seven high school students from around the United States have been named recipients of the 2015 Princeton Prize in Race Relations. The students were honored April 24-25 during the annual Princeton Prize Symposium on Race held on the Princeton University campus.

The winners recently traveled to campus to participate in a two-day program that included group discussions, presentations, and speeches on topics such as "Prejudice in the Blink of an Eye: The Science of Racial Bias" by Stacey Sinclair, associate professor of psychology and African American Studies, and "The Power of Story," by Anthony Carter, former chief diversity officer at Johnson & Johnson. 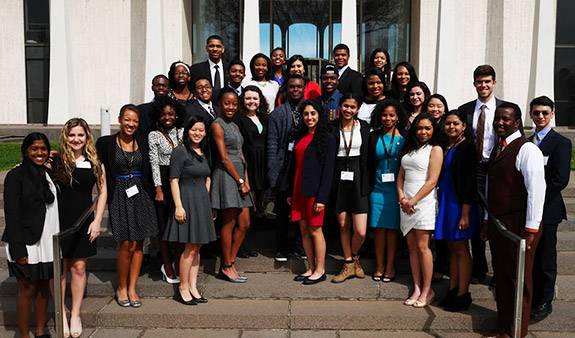 Winners of the 2015 Princeton Prize in Race Relations pose with previous prize winners during a visit to campus April 24-25. The 2015 winners, from high schools around the United States, were honored for their work in increasing understanding and mutual respect among all races. Photo courtesy of the Office of the Alumni Association

The Princeton Prize carries cash awards up to $1,000 for students in grades 9-12 in 25 regions around the country. The 2015 winners by region are:

Atlanta — Angelique Edwards, a senior at Lambert High School, created a student group called The Mix with the idea that people show more compassion for those who are different when they learn to appreciate diversity. The Mix produces videos, organizes school activities with guest speakers, service projects and social events, and holds regular discussions about current social issues.

Baltimore — Grace Greene, a junior at Bryn Mawr School, organized a student forum called "Raising Our Voices: From Ferguson to Baltimore" that aimed to stimulate dialogue about race relations and help educate students about the impact of racial injustice and the importance of diversity. She also organized a protest at the school aimed at emphasizing that empathy is not dependent on being part of a particular racial group.

Connecticut — Cameron Burns, a senior at King Low Heywood Thomas, has been a leader at his school in improving race relations and diversity education. He was an organizer of a multifaceted "Eric Garner Simulated Protest" to expand the conversation about race among students.

Dallas — Staci Shelby, a senior at the Hockaday School, is co-founder and president of her school's first black cultural club, Umoja. She also has promoted race relations with her work on the Dallas-area Diversity Youth Organization, Student Diversity Leadership Conference and Student Diversity Board.

Denver — Emma Austin, a senior at George Washington High School, co-created a workshop to facilitate a sharing of experiences among different groups called "Are We the Same Color If the Lights Are Off?" She led the workshop for more than 200 participants at her school, as well as at other organizations in the Denver area.

Detroit — Abhijay Kumar, a senior at Harrison High School, has been involved in a number of initiatives to improve race relations at his school and in his community, including the Metro Youth Policy Fellows, the Middle School Initiative, Diversity Day, International Night and the 2014 Minority Student Achievement Network Conference.

Houston — Liana Wang, a junior at Bellaire Senior High School, conceived of and organized the first Houston Forum on Race and Culture as a member of the Houston Mayor's Youth Council. More than 50 youth of diverse backgrounds from 11 schools attended the forum.

Los Angeles — Jaspreet Kaur, a senior at Cleveland High School, helped organize the 2014 International Youth Media Summit, a two-week gathering of 80 students from 22 countries, with the purpose of using media to combat discrimination, poverty, violence and other issues.

Memphis — Cornesha Good, a sophomore at Overton High School, was inspired by this past summer's events in Ferguson, Missouri, to organize a "speak in" at her school, providing an opportunity for more than 100 students to participate in an open discussion about race relations; she then organized forums at other Memphis schools.

Miami — Natalia Gonzalez, a senior at MAST Academy, is vice chair of the Miami-Dade County Youth Commission. She helped organize a Trayvon Martin Conference, which gathered more than 300 high school students to speak about their experiences in race relations, and she followed up with similar events at local schools.

Nashville — Christian Cohen, a senior at Hunters Lane High School, has raised awareness about gay rights as a member of the groups Students of Stonewall and Just Us. He also is a member of the Oasis College Connection Youth Advisory Board, which works to increase college access to students in Nashville, and he also works to advocate for undocumented students.

New Jersey, Central and Southern — Tatianna Sims, a senior at Princeton High School, is district president for the Minority Student Achievement Network, a national coalition of multiracial public school districts that come together to understand and eliminate achievement gaps in schools. She created and directed the mini-documentary "The Quest: Equalizing Achievement," which featured interviews with minority students at her high school.

New Jersey, Northern — MacKenzie Foy, a senior at Bergen County Academies, is founder and president of the National Association for the Advancement of Colored People (NAACP) chapter at her school. Through her school's Diversity Alliance, which she helped establish, she led a team of students in reimagining the school's International Day of Tolerance.

Philadelphia — Steffanie Andrea Garzon, a senior at the Westtown School, helped start the school's Students of Color Association. She also collaborates with Westtown's administration on issues of diversity, including recruiting minority students, attracting faculty of color and improving diversity initiatives.

Pittsburgh — Janelle Thompson, a senior at North Hills Senior High School, formed a Diversity Council within her school to promote unity and tolerance of all races and types of people. The group has initiated a number of projects such as an Anti-Bullying Day and World Hello Day.

Rochester — Chyna Stephens, a junior at Pittsford-Sutherland High School, founded and serves as president of the school Diversity Club. The club aims to bridge the gap between students of color and non-minority students.

San Diego — Pranaya Anshu, a senior at University City High School, created the Children's Craft Time program at her local library. The program teaches elementary and middle school children about a different country every Saturday. The children make crafts from the countries and also talk about racism and the importance of racial harmony.

San Francisco — Kadijah Diani Means, a senior at Berkeley High School, has worked on a number of racial justice issues, including directing and editing a documentary about race at her school, planning a Policy Brutality Awareness Rally with Amnesty International and her school's Black Student Union, organizing a school walkout and rally to protest racial injustice in the United States, and organizing a workshop for young African American women.

Seattle — Mia King, a senior at Lakeside School, is co-president of the school's Black Student Union and leader of a Lakeside Affinity and Alliance cohort. She helped organize this year's Martin Luther King Day celebration at the school. Victoria Vong, a senior at Garfield High School, is founder of the "206" Club, named after the area code to represent Seattle's diversity. The club holds weekly meetings and afterschool forums to examine issues related to segregation, cultural appropriation, microagressions and other local conflicts. She also is vice president of the Vietnamese Student Association.

St. Louis — Layla Kousari, a senior at Parkway North High School, founded the Social Justice Action Team, which has developed speaker series, poster campaigns, social media campaigns, campus dialogues and a peaceful protest with the aim of bringing students of different backgrounds together. She also serves as president of Sister Citizen, a group dedicated to fighting racism and empowering women.

Washington, D.C. — Joshua Trust Reed, a senior at St. Stephen's & St. Agnes School, is the leader of African American Males Aiming Towards Excellence at his school. He also was instrumental in forming his school's Unity Council, a coalition of black and Asian affinity groups, Spanish and French clubs and the Gay/Straight Alliance. The Unity Council has facilitated several campus forums to discuss issues concerning race.