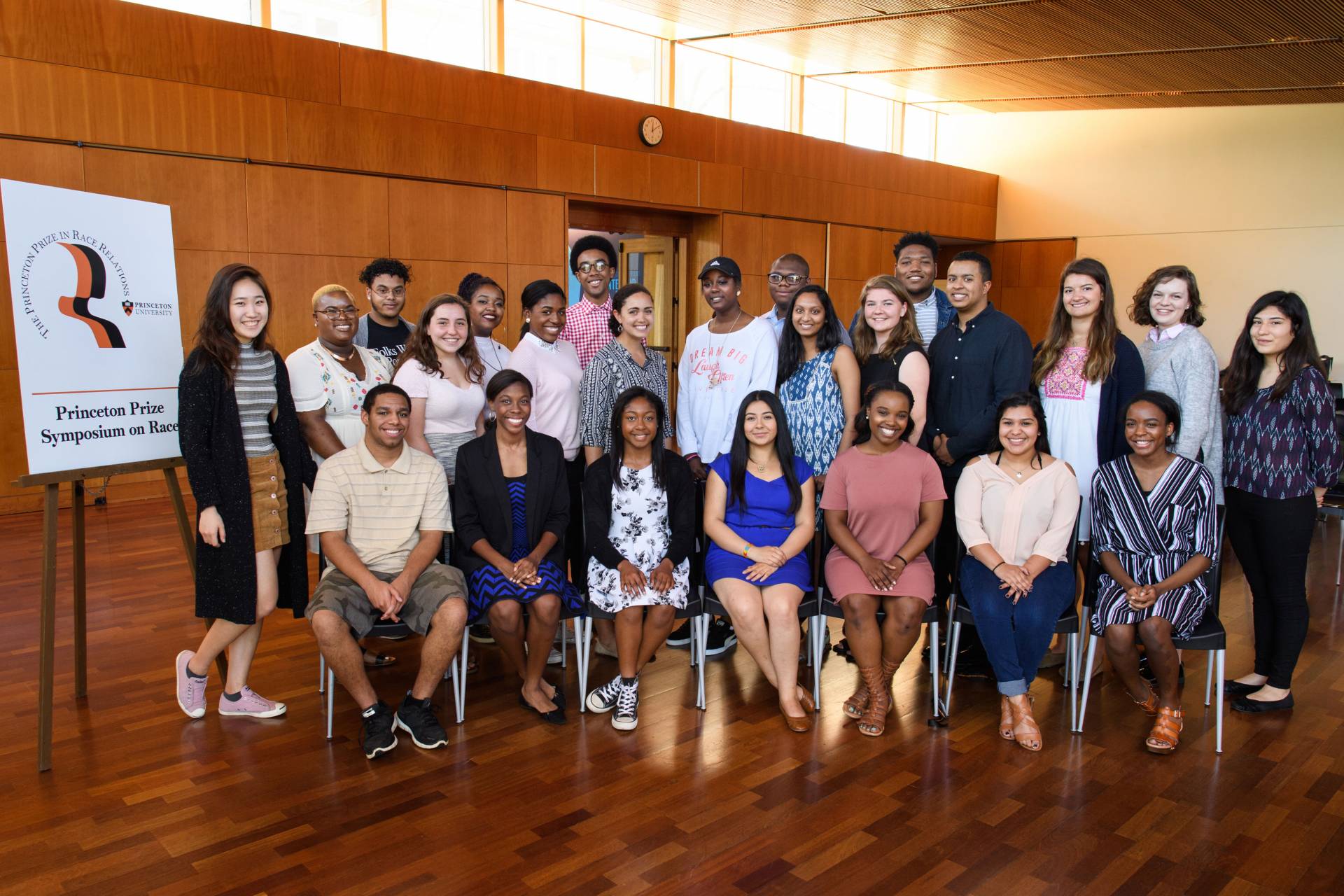 High school students from around the United States were recently honored with the 2017 Princeton Prize on Race Relations during a symposium held April 27-29 on the University campus.

Twenty-seven high school students from around the United States have been named recipients of the 2017 Princeton Prize in Race Relations. The students were honored April 27-29 during the annual Princeton Prize Symposium on Race held on the Princeton University campus.

The winners participated in a two-day program that included group discussions, presentations and speeches, including a keynote address by Cornell William Brooks, president of the NAACP. The Princeton Prize carries cash awards up to $1,000 for students in grades 9-12 in 27 regions around the country. The 2017 winners by region are:

Alabama: Elizabeth Turochy, a senior at Everest Academy, a homeschool program, co-created, developed and implemented a day camp for children in her rural Camp Hill neighborhood, a community with few opportunities for the community's young children.

California (Los Angeles): Maria Cabrales, a senior at Hamilton High School, organized Diversity Night to help break down the racial barriers at her diverse, yet still self-segregated, high school. She is also president of the Dream Activist Leaders of Los Angeles and the founder of the Diversity Coalition Board, which hosts bi-weekly meetings that bring together the cabinets of clubs, such as the Black Student Union, the Latino Student Organization, the Asian Student Association and the Gay Straight Alliance.

California (San Diego): Yulvi Reyes, a senior at the San Diego High School of International Studies, created workshops in the city of Tijuana, Mexico, for Haitian refugee youth who were at risk of being exploited through human trafficking. In addition to founding the organization, Reyes oversaw collecting and delivering goods to refugees in Tijuana.

California (San Francisco): Dylan Brown, a senior at Bishop O'Dowd High School in Oakland, created his school's first social justice advisory group, Solidarity Not Solitary, an organization that serves as a vehicle for students to advocate on issues such as implicit bias, the need for diversity in Silicon Valley, mass incarceration and solitary confinement, immigration reform, sustainability and indigenous rights, and Islamophobia.

Colorado (Denver): Sarah Wiener, a senior at George Washington High School, worked with seven other classmates during her sophomore year to found COLOR (Creatively Optimistic Leaders of Respect), a program of art-based workshops to address racism in the school community. COLOR provided a platform to discuss issues such as prejudice, personal identity and microaggressions, and promoted understanding and tolerance.

Connecticut (New Haven): Jeremy Cajigas, a senior at High School in The Community-Academy for Law and Justice in New Haven, founded Fighter 4 Justice, an organization to help bring about racial unity in his school through conversations about racism, police brutality and white privilege.

Cajigas is also on the advisory board of Citywide Youth Coalition, which hosts city-wide dinners and dialogue to encourage youth to discuss race relations.

Connecticut (New Haven): Cowiya Arouna, a senior at Wilbur Cross High School, led a march and rally of 500 people on New Haven Green when, several days after the 2016 election, a swastika was painted on the wall of her school. Arouna leads the Dinner and Dialogue program of the Citywide Youth Coalition.

Florida (Miami): Desiree Daniel, a senior at Deerfield Beach High School, conducted a survey of more than 300 students about their feelings on the state of race relations in their school. In follow-up classroom discussions, students discussed the ways that the country's recent experiences during the presidential election and highly publicized police activities had brought new racial issues to the forefront.

Georgia (Atlanta): Natalie Peek, a senior at Riverwood International Charter High School in Sandy Springs, worked with her school, church and community to provide education and opportunities for discussions about race and the civil rights struggles. She collected 36 copies of "March: Book One by John Lewis," a graphic novel about civil rights, and incorporated it into an interdisciplinary literature and social studies lesson plan.

Illinois (Chicago): Eva Lewis, a senior at Walter Payton College Prep, started "The I Project," an initiative to humanize people affected by intersectionality by using an activism-through-art approach. She led a Chicago protest of over 2,000 people in response to the murders of Philando Castile and Alton Sterling and helped to found "Youth for Black Lives," which aims to give youth a voice in the Black Lives Matter movement.

Maryland (Baltimore): Asha Rogers, a senior at Long Reach High School in Columbia, founded the Ignite the Light and Light at the Round Tables program that facilitates conversations about racism and racial insensitivities through group discussions, town halls, restorative circles and other events.

Massachusetts (Boston): Lena Harris, a junior at Brookline High School, co-founded a group for multiracial students at her school to foster connections and promote understanding. The Multiracial Identifying Community provided a space for students and teachers to discuss the unique aspects of the multiracial experience.

Michigan (Detroit): Elina Arbo, a junior at Utica Academy for International Studies in Sterling Heights, shifted the focus of the local chapter of Amnesty International, which she had founded in her sophomore year, away from international and national issues toward issues in her school and the surrounding community, such as Islamophobia and discrimination against African Americans.

Missouri (St. Louis): Khalea Edwards, a senior at Kirkwood High School, reignited an inclusive, diverse and impactful Social Justice Club at her school, wrote a column on race in the school newspaper, served as a teaching assistant in the high school's "The Africa to America Experience" class, and led staff development programs on race and equity for the Kirkwood School District.

New Jersey (Central and South): Jonathan Nwigwe, a senior at Notre Dame High School in Lawrenceville, is the founder and advocate of Notre Dame's African American Club, which he re-established and revitalized. He co-organized the first African American Day of Retreat and Reflection, during which the group increased dialogue between faculty and students and organized events to share the unique culture of students of color.

New Jersey (Northern): Yu Jin (Emily) Choi, a senior at Blair Academy in Blairstown, has worked to build bridges connecting her predominantly white classmates with the Latino workers at her school and in the community by presenting speeches and seminars at her school.

New York (Rochester): Shalinda Bollar, a senior at Early College International High School, served as an organizer with Teen Empowerment and helped facilitate focus groups in the Rochester City School District, exploring the school-to-pipeline's effect on minority youth. She also helped develop a new code of conduct focused on problem-solving and building trust, and using suspensions only as a last resort.

New York (New York City): Isaiah Blake, a senior at Xavier High School, founded, Spectrum, the school's first entirely student-led club and the first to invite the Xavier community to engage in thoughtful and authentic dialogue and action around anti-racism.

Ohio (Cleveland): Jasmyne McCoy, a senior at Solon High School, created the school's first African American Culture Club, a space to teach others about African American culture and to serve as an umbrella for community service. She also helped design presentations in collaboration with the Diversity Center of Northeast Ohio and the Police Community Relations Panel.

Pennsylvania (Pittsburgh): Caroline Benec, a senior at Shady Side Academy, has led her school's Diversity Leadership Council, and has developed presentations about cultural identity; created programs on micro-aggressions and the impact of language in communications about race; and led small workshops about race and identity.

Tennessee (Memphis): Hadassah Betapudi, a junior at Evangelical Christian School in Cordova, is the founder and director of Memphis Connects, a program that allows students from different socioeconomic and racial backgrounds to shadow each other at school. The goal of Memphis Connects is to stimulate dialogue and educate students about the impact of racial injustice and the importance of diversity.

Tennessee (Nashville): Brenda Cano, a senior at Centennial High School in Franklin, organized a roundtable to discuss racism against Latino Achievers, a group at her school; developed and promoted an annual International Festival to celebrate the diverse cultures at her school; and advocated for Tennessee's campaign for Tuition Equality.

Texas (Houston): Michael Brown, a junior at Mirabeau B. Lamar Senior High School, is the founder and president of the Lamars Eenheid Club, which works to improve unity among the student body by fostering appreciation of cultures and inspiring good citizenship.

Washington (Seattle): Amir Rashad Matheney, a senior at Olympia High School, created the African American Alliance, an African American youth-focused group in the city of Olympia. He participated in and helped to organize forums with the City of Olympia Police Department, with a goal of brokering stronger relationships between the public and the Olympia Police Department. He is also a member of Black Alliance of Thurston County, working to educate the public on race relations and social, political and economic privilege.

Washington D.C. (Silver Spring, Maryland): Iyanu Bishop, a junior, and Claire Maske, a senior, both at Montgomery Blair High School, founded the Blair Interracial Dialogue club to foster conversations about race relations among the student body. The club has provided a forum for students to discuss their concerns and fears, and share insights into their racial identities with their fellow students.