Twenty-five high school students from around the United States have been named recipients of the 2014 Princeton Prize in Race Relations.

The students were honored April 25-26 during the seventh Princeton Prize Symposium on Race held on the Princeton University campus. The University created the prize to identify and commend young people working to increase understanding and mutual respect among all races.

During an Alumni and Community Day program on April 26, the students participated in several activities including group discussions with alumni, parents and other guests that were facilitated by Omar Wasow, an assistant professor of politics. 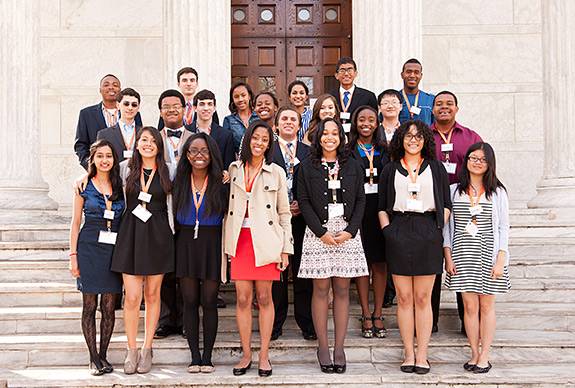 Winners of the 2014 Princeton Prize in Race Relations pose for a group photo. The students, from high schools around the United States, were honored for their work in increasing understanding and mutual respect among all races. (Photo by David Mejias, Office of the Alumni Association)

The Princeton Prize carries cash awards up to $1,000 for students in grades 9-12 at schools in 24 regions around the country. The 2014 winners by region are:

Baltimore — David Hamburger, a senior at Pikesville High School in Baltimore, founded the Student Educational Advisory Resource Center for Help (SEARCH) to promote unity and understanding between diverse groups at his school.

Boston — Boya Zhou, a junior at Boston Latin School, who took a leadership role in identifying racial bias in disciplinary practices in the Boston Public Schools.

Chicago — Makaia Barnes, a senior at Evanston Township High School, for leadership in the Minority Student Achievement Network (MSAN), which promotes racial equity in schools around the country and aims to close the achievement gap.

Connecticut — Adam Petno, a junior at Green Farms Academy, uses his musical talents to create bridges across the divides of racial, cultural and social differences. He and his twin brother founded Studying Music and Rhythm Together (SMART), which organizes volunteers to mentor young musicians from low-income families.

Connecticut —  Ryan Shepard, a senior at Choate Rosemary Hall, has been a leader in wrestling with the complexities of issues surrounding race. As president of the Choate Slam Poetry Association, he organized Choate's first inter-school poetry contest bringing together students from different schools, backgrounds and races.

Dallas — Ayodele Aigbe, a sophomore at the School of Science and Engineering Magnet, was honored for her leadership role in the Voices of Diversity Initiative at William B. Travis Middle School in Dallas, a program designed to foster discussions on diversity issues.

Denver — Raymond Pryor IV, a junior at East High School, works as a leader with the Angels for AP Excellence Committee to reach out to students of color, help teachers make Advanced Placement instruction more inclusive, and provide academic support to students who need it.

Detroit — Semaj’ Davis, a junior at Walled Lake Northern High School, founded the African American Awareness Club to educate the predominantly white student population and the staff on the history, achievements and culture of African Americans.

Los Angeles — Anant Pai, a junior at Redlands High School, founded a chapter of Cultures for Youth at his school after derogatory slurs were hurled at him and a turban-wearing friend.

Miami — Blake Mars, a senior at Dr. Michael M. Krop Senior High School, was a sophomore when fellow student Trayvon Martin was killed. As student body president, Blake made combating racism and hatred his theme agenda, planning and coordinating a series of events and conducting classroom-by-classroom presentations on overcoming divisions.

New Jersey, Northern — Apriele Minott, a senior at Randolph High School, is president of the Team Harmony club. She used the interception of racially charged messages posted on Facebook by a student as an impetus for the development of a school-wide diversity assembly.

New York City — Oumar Adam Hassaballah, a senior at the Bronx International High School, was a founding member of the Morris Student Leadership Council, which brings together students from the four schools composing the Morris Educational Campus to reduce violence on campus and in the greater community.

Pittsburgh — Cassandra Lignelli, a senior at Ringgold High School, had a life-changing experience studying in Morocco and upon her return started programs to meet her goal to be proactive in addressing a lack of racial and cultural respect in her school.

Rochester — Unique Fair-Smith, a junior at World of Inquiry, has been a featured participant on the WXXI TV "Citywise Teen Forum" program and has been an articulate and passionate voice on controversial topics of race and ethnicity.

Seattle — Quinn Buchwald, a Native American senior, is founder and president of the Native American Student Council at Garfield High School. The council promotes the understanding of and respect for tribal people through school-based and community activities.

St. Louis — Tess Mandoli, a junior at Mary Institute and Country Day School, founded the National Diversity Alliance (NDA), which aims to spread diversity awareness in her community and across the country.