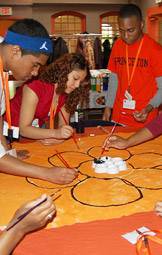 The first-ever Princeton Prize Symposium on Race, held May 3, honored high school students who have worked to improve race relations in their schools or communities. The event also featured lectures and panel discussions on race relations. A day earlier, high school students from New Jersey and Pennsylvania joined the Princeton Prize in Race Relations winners at a series of workshops and lectures. Here, Rashá Harvey (right), a Princeton Prize winner from Nashville, and other students participate in an art workshop. (Photo: Marguerite Vera) 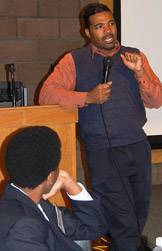 Angel Harris, assistant professor in the Department of Sociology and the Center for African American Studies, addresses students at a workshop preceding the symposium. (Photo: Marguerite Vera)

View a video of prize winners discussing their projects.

Projects recognized by the Princeton Prize in Race Relations -- which honors high school students' efforts to improve race relations in their schools or communities -- were presented at the first-ever Princeton Prize Symposium on Race recently held on the University campus.

Mayor Douglas Palmer of Trenton, N.J., gave the keynote address on "The Challenges and Rewards of Leading a Diverse City" at the Saturday, May 3, symposium. The event also featured a panel discussion on race relations with local community leaders.

Sponsored by Princeton University, the Princeton Prize in Race Relations is an awards program that was created by Princeton alumni volunteers in 2003 to recognize high school students who are doing exceptional work to advance the cause of race relations. The prize is offered in 21 regions across the country. 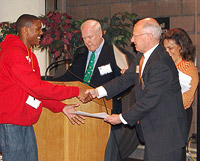 Princeton Prize founder Henry Von Kohorn (front right) presents Princeton Prize winner Sidney Johnson of Memphis with a certificate of participation, assisted by Brian Breuel (at podium), a Princeton class of 1966 alumnus, and Marguerite Vera (back right), associate director for affiliated group affairs for the University's Alumni Council. The symposium was sponsored by the Princeton class of 1966 and cosponsored by the University's Office of the Alumni Association and the Fields Center. (Photo: Imani Joseph)

Eighteen prize winners from 14 prize regions attended the symposium to share their views on race and present the work that they did to win the prize. Winners included a New Jersey student who helped raise more than $10,000 as president of the student group Help Darfur Now, and a Pennsylvania student who revived his high school's newspaper as a way to improve dialogue between students of different racial and ethnic backgrounds.

"It had been a dream of the Princeton Prize Committee to bring our honorees to Princeton for a symposium on race and to celebrate the achievements of these inspiring young people who have made such a positive impact on improving race relations in their schools or communities," said Princeton Prize founder Henry Von Kohorn, a Princeton class of 1966 alumnus.

Following the success of this year's symposium, Von Kohorn said organizers hope it will become an annual event.

The symposium also featured a panel discussion on "Innovations in Race Relations Within Our Local Communities." Panelists included community organizers Richard Cammarieri of New Community Inc., in Newark; Joyce Hadley, first vice president of the Bucks County Peace Center; Kiki Jamieson, the Class of 1951 Director of the University's Pace Center; Caroline Mitchell, director of the Racial Justice Institute of YWCAs Princeton and Trenton; and Sasa Olessi Montaño, director of the Department of Housing and Economic Development for the city of Trenton.

"We hope the event inspired students and the community at large to look for ways to participate in making their communities, schools and organizations welcoming places that respect and honor all of our differences," Von Kohorn said. 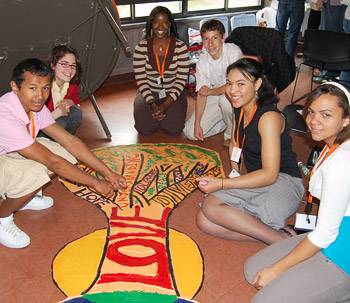 A day before the symposium, high school students from New Jersey and Pennsylvania joined the Princeton Prize winners at a series of workshops and lectures on race relations held on the University campus. The workshops and lectures were led by University faculty, staff and alumni, including Angel Harris, assistant professor in the Department of Sociology and the Center for African American Studies, and Kimberly Smith, visiting associate professor of the Center for African American Studies and the Princeton Environmental Institute. The symposium was sponsored by the Princeton class of 1966 and cosponsored by the University's Office of the Alumni Association and the Fields Center for Equality and Cultural Understanding.

Von Kohorn (front row, far left), Vera (back row, third from right) and Breuel (back row, far right) join the 18 winners of the Princeton Prize who attended the symposium and presented the work they did to earn the award. (Photo: Imani Joseph)