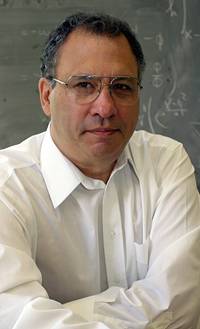 Below left: Levin celebrated the award with his colleagues (and wife Carole, at left) at a reception Friday, June 10, outside Eno Hall. (Photo: John Jameson)

Princeton ecologist Simon Levin has been named a recipient of the Kyoto Prize in honor of his contributions to environmental science.

The Inamori Foundation of Japan presents the annual awards in recognition of lifetime achievement in the categories of basic science, advanced technology and arts and philosophy. The award includes a cash prize of 50 million yen, or approximately $460,000.

Levin will receive the basic science award during a week of ceremonies beginning Nov. 10 in Kyoto. George Heilmeier, the inventor of liquid crystal display technology and a graduate alumnus of Princeton, will receive the Kyoto Prize in advanced technology.

"In proposing many methods of biological conservation and ecosystem management, Professor Levin has made fundamental contributions to environmental science," the foundation stated in a news release announcing the award.

Levin has been a leader in applying mathematical approaches to studies of ecosystems across a wide range of scales, from the behavior and genetics of individual organisms to the dynamics of large populations. He has collaborated with economists and environmental scientists to propose new methods for dealing with environmental problems.

"Among his primary concerns are the staggering losses in biodiversity worldwide that have resulted in the recent past from the mass production, consumption and waste disposal practices of human populations," the foundation noted.

Levin edited the landmark Encyclopedia of Biodiversity (2001), a 4,700-page, five-volume set that covers biodiversity in all its facets, from how it arose through evolution to how it relates to the modern economy. His many other publications include a 1999 book "Fragile Dominion," which illustrates how the loss of biodiversity has created direct threats to human survival, and a 1992 paper published in Ecology, "The Problem of Pattern and Scale in Ecology," which was the most cited article in the field during the 1990s. 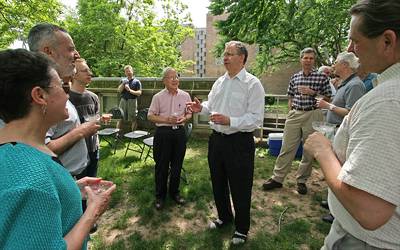 Levin joined the Princeton faculty in 1992 from Cornell University, where he had been a faculty member since 1965. He is a graduate of Johns Hopkins University and earned his Ph.D. from the University of Maryland.

Heilmeier, who earned his Ph.D. in electrical engineering from Princeton in 1962, was recognized by the Inamori Foundation for his groundbreaking research in the field of liquid crystals while working for RCA Laboratories. Liquid crystal displays are now found on hundreds of devices, including home theater systems, laptop computers, mobile phones, digital watches and home appliances.

Heilmeier is a former president and chief executive office of Bell Communications Research (now Telcordia Technologies) and currently serves as chairman emeritus of the company.

The Inamori Foundation was established in 1984 by Kazuo Inamori, founder and chairman emeritus of Kyocera Corp. The Kyoto Prize was founded in 1985 and has been awarded to scientists, engineers, researchers and artists from 12 nations. The third 2005 Kyoto Prize, honoring achievement in arts and philosophy, will be awarded to Austrian conductor and musician Nikolaus Harnoncourt.

More information is available on the Kyoto Prize Web site.