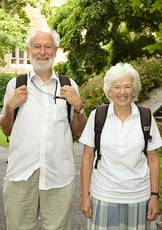 Peter and Rosemary Grant arrive on campus Friday morning after learning they have been selected to receive the Kyoto Prize. Photo: Denise Applewhite

Princeton University's Peter and Rosemary Grant, whose legendary explorations on the bleak Galapagos island of Daphne Major over nearly four decades have produced an array of dazzling insights into evolutionary theory, have been named recipients of the Kyoto Prize.

The biologists are the first husband-and-wife team to win in the 25-year history of the prize. They were cited both for their scientific ideas and their personal characteristics that have shaped those achievements.

"The Grants' empirical research has made the most important contribution since Darwin toward making evolutionary biology a science in which proof is possible," the Inamori Foundation stated in a news release announcing the award.

The Kyoto Prize, a major international distinction, is presented by the Inamori Foundation of Japan. It honors lifetime achievements in the categories of basic science, advanced technology, and arts and philosophy. The award includes a cash prize of 50 million yen or approximately $500,000 for each category. The award will be presented during a week of ceremonies beginning Nov. 9 in Kyoto.

"We are honored and deeply humbled to receive this award," the Grants e-mailed the foundation on Friday (June 19) morning upon learning of their selection. "It is a special privilege to receive this honor from the Inamori Foundation that has as its aim the fostering of both scientific and spiritual values on a worldwide level.

"We are profoundly grateful to the foundation for recognizing and celebrating the value of scholarship and the importance given to the interchange and balance between scientific advancements and spirituality, and for the opportunity the prize gives for intercultural and intergenerational exchange," they continued. "Conscious of the list of scholars who have received the Kyoto Prize, we thank you with great pleasure, gratitude and humility." 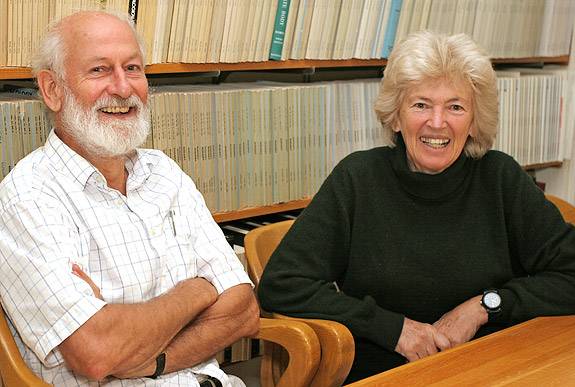 Peter Grant is the Class of 1877 Professor Emeritus of Zoology, and Rosemary Grant is a retired senior research scholar, both in the Department of Ecology and Evolutionary Biology at Princeton.

In their dogged study of a population of birds popularly known as "Darwin's finches," the Grants have won renown for detecting and recording evolution in action, and proving and extending the theories of pioneering evolutionist Charles Darwin. Working in the Galápagos, the most celebrated place in the study of evolution, they have conducted extensive surveys of the totemic birds, whose beaks spurred the great naturalist's first allusions to what would be his world-shattering theory.

"Peter and Rosemary have combined their expertise in biology and ecology to really unravel the evolutionary dynamics of Darwin's finches," said Daniel Rubenstein, the chair of the Department of Ecology and Evolutionary Biology and the Class of 1877 Professor of Zoology. "It is fitting that on the 200th anniversary of Darwin's birth that they receive the award and underscore Darwin's view about the integrative nature of biological processes."

John Bonner, the George M. Moffett Professor Emeritus of Biology at Princeton, said, "Peter and Rosemary Grant have been the leaders in showing how evolution works -- how small changes can lead to big ones. It is particularly fitting that the zenith of their careers coincides with this year's [much celebrated anniversary]. They are universally recognized and have been the honored guests at an extraordinary number of lectures and symposia all over the globe celebrating Darwin."

For much of the public, the work of the Grants first came to light in Jonathan Weiner's Pulitzer Prize-winning account of their efforts, "The Beak of the Finch." Published in 1994, the book detailed the couple's arduous, yearly six-month stay in tents on Daphne Major, a desolate volcanic island 600 miles west of Ecuador. There, since 1973, they have undertaken what was described in Weiner's book as "one of the most intensive and valuable animal studies ever conducted in the wild."

But, among their peers in zoology, ecology and evolutionary biology, their work was already legendary and their eminence has only grown.

What the Grants have been trying to do and how they go about doing it may be best explained by them in their 2008 book, "How and Why Species Multiply: The Radiation of Darwin's Finches."

"We choose a single group of related species for close scrutiny," they wrote, "and attempt to answer the following questions: Where did they come from, how did they diversify, what caused them to diversify as much as they did (and no more) and over what period of time did this happen?"

What the Grants have shown through their relentless study and cataloging of 14 varieties of island finches is how beak size and shape evolve through natural selection within a dramatically changing environment, according to certain mechanisms and conditions.

"You have to follow exactly what is happening, otherwise you just guess," said Rosemary Grant in their offices in Eno Hall at Princeton earlier this week, explaining the exacting techniques that have led to their knowing every bird on the island over many generations.

"And we also have to be very careful that we don't fool ourselves," added Peter Grant. The couple talks in the same give-and-take manner in which they work. "We need very precise numbers to know exactly what has happened, to cut out any possibility for guesswork."

The researchers consider themselves fortunate for many reasons, but especially for having been able to combine their professional duties with family time. Their daughters, Nicola and Thalia, are now grown, with Nicola a physician and Thalia a biologist and artist. As girls, they often accompanied their parents to live in Daphne Major. Both daughters published research papers on what they found there, and their parents consider them collaborators on their work.

"This has been one of the highlights of our life, that we've been able to live as a family doing science," Peter Grant said. "How many other people can say the same?"

On Friday, he thanked the many people and organizations who have assisted their research over the years. "We've only been able to do this work as a result of a lot of support from numerous graduate students, postdoctoral fellows and colleagues we've collaborated with," he said.

The organizations include: the Charles Darwin Foundation, the Galápagos National Park Service, Princeton and McGill universities, the University of Michigan, the National Research Council of Canada and the National Science Foundation.

Peter Grant joined the Princeton faculty in 1985. He previously held faculty positions at the University of Michigan and McGill University. He is a graduate of the University of Cambridge and holds a Ph.D. from the University of British Columbia. Grant served as chair of Princeton's newly created Department of Ecology and Evolutionary Biology from 1990 to 1991. He transferred to emeritus status last year.

Rosemary Grant came to Princeton in 1985 as a research staff member. She is a graduate of Edinburgh University and worked as a research associate at several universities until she earned her Ph.D. from Uppsala University in Sweden. Also serving as a lecturer during most of her time at Princeton, she became a senior research scholar in 1997 and retired last year.

In addition to being invited to Kyoto to receive the prize in November, the Grants will be asked to reconvene in San Diego April 20-22, 2010, for the ninth annual Kyoto Prize Symposium.

This is the second time the prize has gone to a Princeton faculty member. In 2005, their departmental colleague Simon Levin, the George M. Moffett Professor of Biology, won the basic science award for his leading contributions to environmental science. The same year, George Heilmeier, the inventor of liquid crystal display technology and a 1962 Princeton graduate alumnus, won in the advanced technology category.

"It's an honor to be following in [Simon's] footsteps," Rosemary Grant said. The fact that three members of the Department of Ecology and Evolutionary Biology have won the Kyoto Prize in four years "says a lot about the quality of this department -- that in under 20 years, it's reached this distinction," Peter Grant added.

This year's other winners are: Isamu Akasaki, a semiconductor scientist, university professor at Nagoya University and professor at Meijo University in Japan, for advanced technology; and Pierre Boulez, a composer, conductor and honorary director of the Institute for Research and Coordination Acoustic/Music (IRCAM) in France, for arts and philosophy.