Princeton scientists Peter and Rosemary Grant, winners of this year's Kyoto Prize for their pioneering work in evolutionary biology, will be honored with a lecture by noted researcher Jonathan Losos at 6 p.m. Friday, Dec. 4, in 10 Guyot Hall.

Losos, a professor in Harvard University's Department of Organismic and Evolutionary Biology, will speak on "Islands as Natural Laboratories of Evolution: From Darwin to the Grants and Beyond." The talk, sponsored by the Department of Ecology and Evolutionary Biology, is part of a series of departmental events titled "A Celebration of Evolution at Princeton: Peter and Rosemary Grant and the Evolution of Darwin's Finches."

"Jonathan Losos is a world authority on speciation and the evolution of animals on islands, having worked for many years with the extraordinarily diverse lizards of the Caribbean islands," said Peter Grant.

Rosemary Grant added, "We are absolutely delighted that Jonathan Losos, who is such a distinguished biologist and has done work similar to our own, will be speaking." 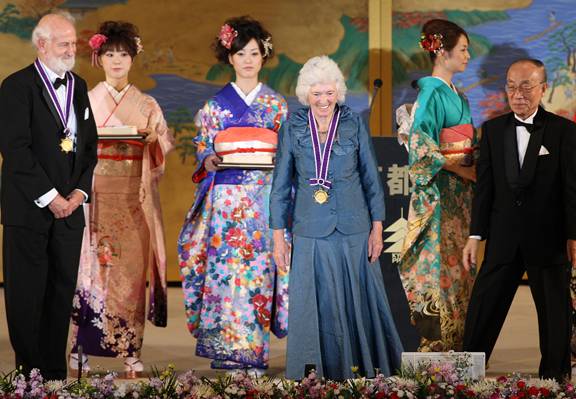 Losos, who also is a curator in herpetology in Harvard's Museum of Comparative Zoology, studies how species are adapted to their environment, how these adaptations are affected by ecological interactions and how they have evolved through time.

Losos will be introduced by author Jonathan Weiner, the Maxwell M. Geffen Professor of Medical and Scientific Journalism at the Columbia University Graduate School of Journalism. Weiner's Pulitzer Prize-winning book, "The Beak of the Finch," brought the work of the Grants to light for most of the public. Published in 1994, the book detailed the Grants' arduous, annual stay in tents on Daphne Major, a desolate volcanic island 600 miles west of Ecuador. There, since 1973, they have undertaken what was described in Weiner's book as "one of the most intensive and valuable animal studies ever conducted in the wild."

Peter Grant is the Class of 1877 Professor Emeritus of Zoology and Rosemary Grant is a retired senior research scholar in ecology and evolutionary biology.

"The Grants are quintessential scientists, always probing for answers to some of nature's thorniest problems," said Daniel Rubenstein, the chair of the Department of Ecology and Evolutionary Biology and the Class of 1877 Professor of Zoology. "Their insights into how evolution operates have revolutionized our understanding of the process of speciation. But their probings and ability to inculcate their way of doing science into their teaching has also inspired a new generation of students to attack the most challenging problems in ecology, evolution and animal behavior."

The Kyoto Prize, a major international distinction, is presented by the Inamori Foundation of Japan. It honors lifetime achievements in the categories of basic science, advanced technology, and arts and philosophy. The award was to be presented to the Grants in Kyoto during a week of ceremonies beginning Nov. 9.

"It is a wonderful honor to be recognized in this way, and especially moving to know that we are the first husband-and-wife team to be given the award in the 25-year history of the Kyoto Prize," Peter Grant said. "Moreover we are following in the footsteps of our colleague (George M. Moffett Professor of Biology) Simon Levin, who received the prize four years ago, so we feel the occasion is cause for celebration of our small EEB department; not bad for a department less than 20 years old and with only 15 faculty."

In their persistent study of birds popularly known as "Darwin's finches," the Grants have won renown for recording evolution in action and for extending Charles Darwin's theory of evolution by natural selection. Working in the Galápagos, the most celebrated place in the study of evolution, they have conducted extensive surveys of the finches that contributed to Darwin's earth-shaking theory.