Scientists from Princeton University and Uppsala University in Sweden have identified a specific gene that within a year helped spur a permanent physical change in a finch species in response to a drought-induced food shortage. The findings provide a genetic basis for natural selection that, when combined with observational data, could serve as a comprehensive model of evolution.

Environmental change coupled with the gene HMGA2 drove the rapid evolution of a smaller overall beak size in the medium ground finch (Geospiza fortis) that inhabits Daphne Major in the Galápagos Islands. Members of the species — which belong to the group of 18 bird species known as Darwin's finches that populate the Galápagos — possessed small or large beaks. Medium ground finches with smaller beaks, however, survived a severe two-year drought better than medium ground finches with larger beaks, the researchers report in the journal Science. 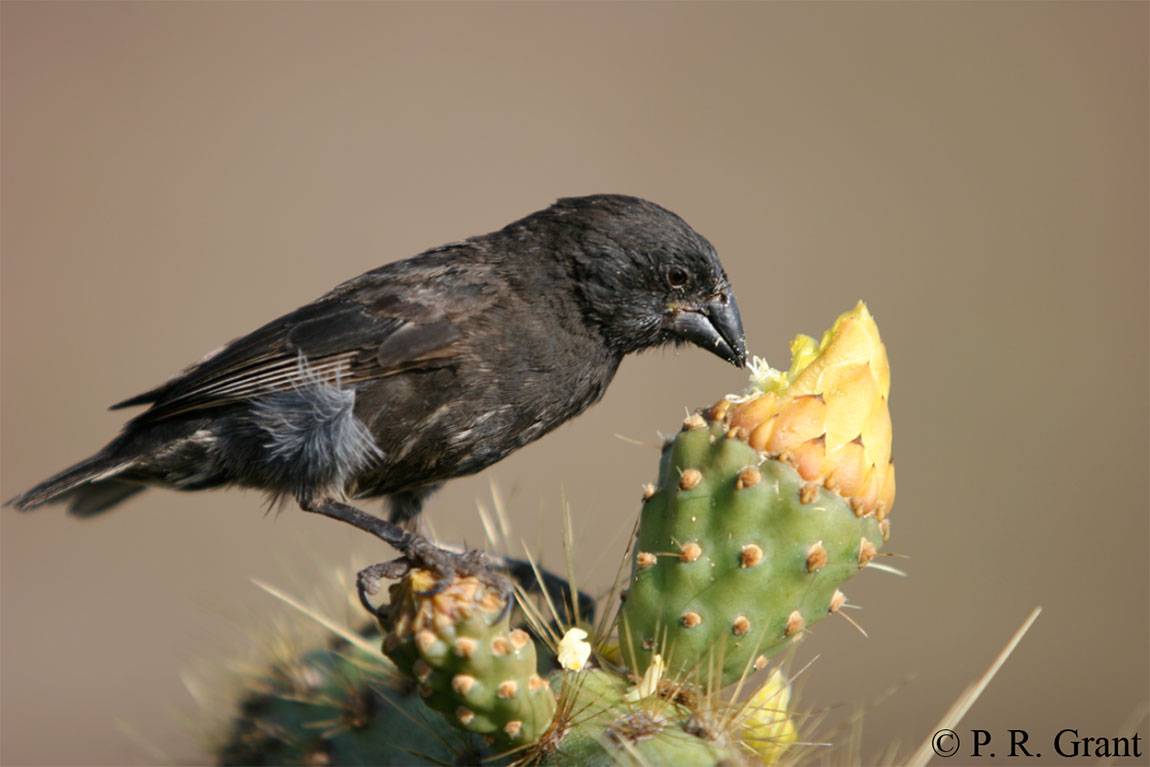 Scientists from Princeton University and Uppsala University have identified a specific gene that within a year helped spur a permanent physical change in a finch species in response to a drought-induced food shortage. The gene HMGA2 provided the genetic underpinning of the rapid evolution of a smaller overall beak size in the medium ground finch (above), one of the 18 species of Darwin's finches that inhabit the Galápagos Islands. Medium ground finches with smaller beaks survived a severe two-year drought better than medium ground finches with larger beaks. (Photo by Peter Grant, Department of Ecology and Evolutionary Biology)

The latest paper stems from research reported in the journal Science in 2006 by co-authors and Princeton researchers Peter Grant, the Class of 1877 Professor of Zoology, Emeritus, and B. Rosemary Grant, a senior research biologist, emeritus, in ecology and evolutionary biology. The Grants had found that four out of five medium ground finches perished during the 2004-06 drought, and that those that survived had smaller beaks. The medium ground finches with larger beaks had succumbed to competition for limited food resources with the large ground finch (G. magnirostris), another large-beaked species of Darwin's finch. The small-beak medium ground finches did not experience the same competitive intensity.

In the new study, scientists led by senior author Leif Andersson, a genomics professor at Uppsala, worked with the Grants — who have studied natural selection in Darwin's finches for more than 40 years — to identify the gene that caused the adaptation of the smaller beak.

"It was an exceptionally strong natural-selection event," said Peter Grant, adding that because Daphne Major is in an entirely natural state the occurrence was completely unaffected by humans. "Now we have demonstrated that HMGA2 played a critical role in this evolutionary shift and that the natural selection acting on this gene during the drought is one of the highest yet recorded in nature."

"This research tells us that a complex trait such as beak size can evolve significantly in a short time when the environment is stressful," Rosemary Grant said. "We know that bacteria can evolve very quickly in the lab, but it is quite unusual to find a strong evolutionary change in a short time in a vertebrate animal."

The researchers identified HMGA2's role by screening the genomes of medium ground finches that survived or died during the drought until they located the locus, or gene position, that had a major effect on beak size. The researchers found that the HMGA2 gene comes in two forms: one is common in finches with small beaks, while the other is common in finches with large beaks. The proportion of the two forms in the birds' genome changed as a result of the better survival of birds with small beaks.

Peter Grant likened the genomic swap caused by the drought to a person eating a bowl of rice with white and black grains, but the person favors white rice. When the person stops eating, there will be much more black rice than white, which has the effect of favoring the survival of the black rice over the white. If we assume the remaining rice grains are viable and are planted, the crop would be predominantly black, as will every rice crop that germinates from that one, Grant said.

In that same way, the drought of 2004-06 "consumed" the HMGA2 gene for large beaks by killing off the large-beaked birds, leaving the HMGA2 gene for small beaks behind to proliferate and ensure that future generations of G. fortis will have smaller beaks.

The identification of HMGA2 as the determinant of beak size builds on 2015 research the Grants and Andersson's group published in the journal Nature that singled out the gene ALX1 as the one that most influences beak shape, such as if a finch's beak is pointed or blunt. Together, the genes could be the most prominent determinants of how Darwin's finches adapt to their environment, said first author of the current study Sangeet Lamichhaney, a doctoral student under Andersson.

"Our data show that beak morphology is affected by many genes as is the case for most biological traits," said Lamichhaney, who also was first author of the 2015 paper. "However, we are convinced that we now have identified the two loci with the largest individual effects that have shaped the evolution of beak morphology among the Darwin's finches."

The gene HMGA2 is not limited to finches, Andersson explained. It has previously been associated with different body sizes in dogs and horses. It also is one of the genes most consistently associated with variation in stature in humans, which is determined by hundreds of genes. HMGA2 also has a role in cancer biology since it affects the epithelial-mesenchymal transition (EMT) that is important for metastasis and cancer progression, Andersson said. 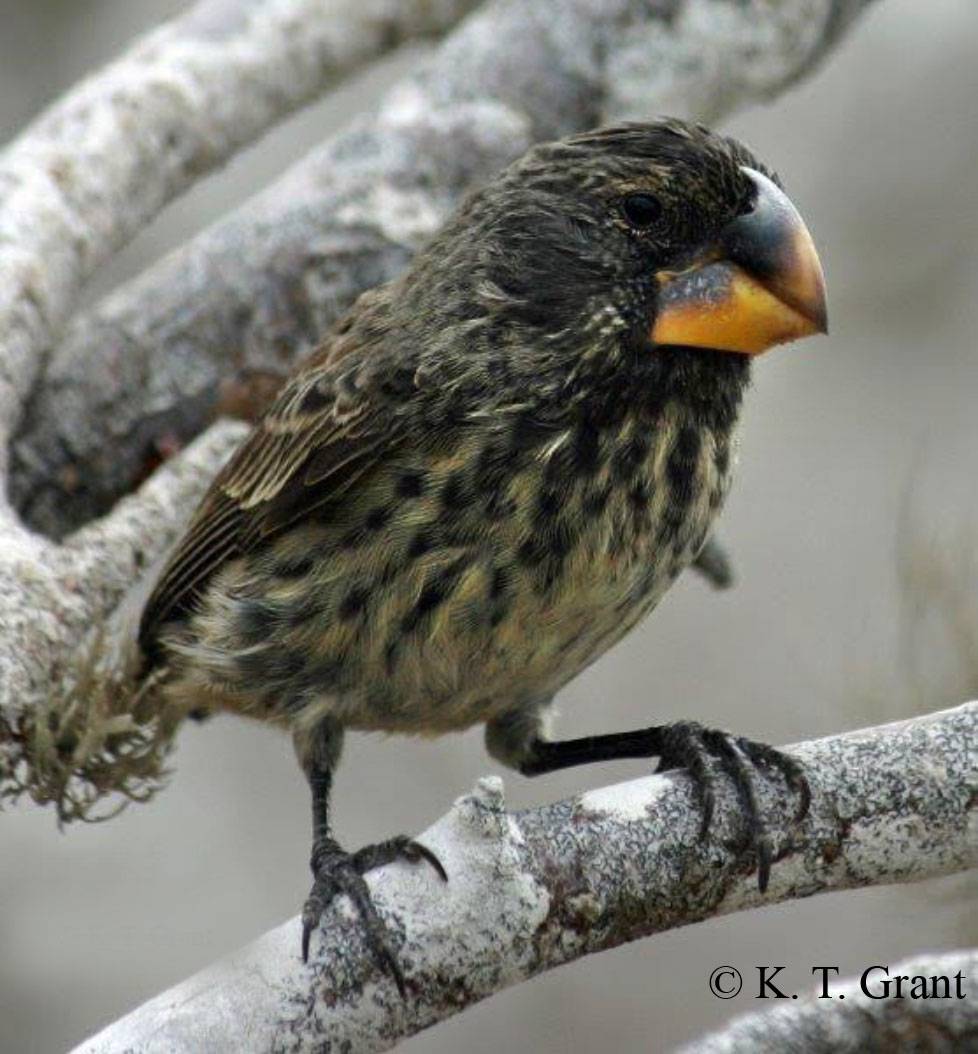 "It is very fascinating that this gene pops up in many different species as a gene affecting growth and, in humans, as a gene affecting dysregulated cell growth in cancer. It is clear that more research to better understand the function of this gene is well justified," Andersson said. "The HMGA2 gene regulates the expression of other genes but the exact mechanism of how it controls beak size in Darwin's finches or human stature is unknown."

The common ancestor of the Darwin's finches arrived in the Galápagos around 2 million years ago, and since then the birds have developed unique shapes, songs, feeding behaviors, and body and beak sizes in response to competition for food, mates and resources. Their namesake, English naturalist Charles Darwin, concluded from his observations of the finches that competition for limited resources drives species to evolve unique traits that reduce competition, which is known as ecological character displacement.

The Grants' 2006 paper in Science reported one of the strongest observations of ecological character displacement in action. When that research is combined with the current paper, the saga of the medium ground finch's evolution serves as a contemporary and observable case of how evolution has played out for millennia, Grant said.

"When inferring how evolution has occurred in the past, we biologists need examples of how it is known to occur in the present," he said. "Our findings provide all the ingredients of a clear and interpretable example: environmental stress, competition between species for food, divergence in a trait that functions in food exploitation and is heritable, and an evolutionary change from one generation to the next without any complications arising from human alteration of the environment."

Jonathan Losos, a Harvard University professor of organismic and evolutionary biology, said that the latest findings could position Darwin's finches as an archetype for studying evolution.

"Peter and Rosemary Grant's research on Darwin's finches was among the very first to demonstrate that strong natural selection can produce very rapid evolutionary change. This study takes that work even further by discovering the actual genes that are selected upon, thus completing the story," said Losos, who is familiar with the research but had no role in it.

"We now know why birds with particular traits survive better as well as the genes underlying these traits," Losos said. "More generally, this work makes Darwin's finches an even better example of how the evolutionary process works. This study will soon make its way into textbooks and will be an inspiration for evolutionary biologists who study the origin of biological diversity around the world."

The paper, "A beak size locus in Darwin's finches facilitated character displacement during a drought," was published April 21 in Science.

Uppsala University contributed to this article.