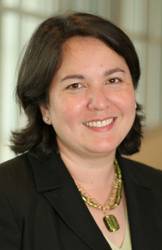 Princeton University's Pace Center has a new director and a clarified mission for getting students, faculty, staff and alumni involved in public service.

Beth Kiyoko (Kiki) Jamieson, a lecturer in politics since 1999, has been selected to lead the center after serving for a year as interim director. Her appointment was effective July 1.

"She is dynamic and resourceful; she knows Princeton and the surrounding communities well; and she is passionate about teaching and engaging students in meaningful public service activities that will enrich their learning experiences," said Janet Dickerson, vice president for campus life.

During the past year, Jamieson has led an effort to update the mission of the center with a focus on civic engagement. She also has collaborated with colleagues across campus to plan a variety of activities for the coming year centered on this theme, which involves developing civic skills and leadership abilities, inspiring an engaged citizenship, applying knowledge to real-life challenges and promoting a civil society. Working with Jamieson is Elsie Sheidler, a two-year member of the staff who was named assistant director of the center in March.

"Under Kiki's direction, the Pace Center has been bringing all the individuals and opportunities related to civic engagement to the same table," said David Brown, program coordinator for the Student Volunteers Council and a longtime collaborator with the Pace Center. "They are creating the possibilities for a variety of approaches to permeate into all areas of the campus community."

According to its new mission statement, the center is "the campus advocate for civic engagement." The center plans to concentrate on several areas, including: active involvement in the democratic process; informed understanding of communities' needs and assets; sustained focus on solving public problems, using academic, intellectual and technical skills, and associated resources; and effective leadership to promote the public good. Its work is intended to support the University's commitment -- and informal motto -- to be "in the nation's service and in the service of all nations."

The center works with all University constituents -- undergraduate and graduate students, faculty, staff and alumni -- as well as with community partners to serve as a central resource for civic engagement and educational outreach opportunities.

"Our goal is to connect public service with the academic mission of the University, and we do so by facilitating learning, teaching and action in the public interest," Jamieson said. "We encourage students to actively participate in public service, and to reflect on the ways their experiences inform their scholarship."

Leslie-Bernard Joseph, a Princeton senior who is president of the Undergraduate Student Government, reinforces Jamieson's platform: "Professor Jamieson has always inspired activism in her students by asking the tough questions that require us to dig deeper and determine our level of commitment to bettering our world. It is an exciting time for activism and civic involvement on campus, and the 'new' Pace Center is leading the way."

During the next academic year, the center will be taking on several projects with its new focus in mind. It will be supporting an effort initiated by the Undergraduate Student Government to reinvigorate public service and civic engagement at Princeton. The Princeton in the Nation's Service Project is a month-long series of activities that will take place throughout October. It will include large-scale activities such as a walkathon, canal and park cleanups, and a closing event highlighting the dimensions of service at Princeton as well as a general effort to encourage Princetonians to incorporate public service more consistently in their lives.

"The idea is to get people to use their talents and skills for the public good in order to make the point that you can be 'in the nation's service' by doing the things you already do and adding a twist," Jamieson said. "For example, a cappella groups could partner with a Student Volunteers Council project to provide an opportunity for students to sing and perform with after-school programs or at senior citizen centers."

The Pace Center also is spearheading a thematic programming initiative focused on class, providing a year-long opportunity to wrestle with one of the most challenging political and social issues. Groups across campus -- from the Graduate School to the School of Engineering and Applied Science -- are joining together to sponsor events on this theme. The idea was generated by a recent New York Times series titled "Class Matters," and was endorsed by students.

"The series pointed out that class is more than just wealth, and that the class divides are ever more significant in the United States and abroad," Jamieson said. "What we recognize is that class is one of those things that matters enormously at Princeton, but it is rarely discussed, in part, because it can be so uncomfortable."

Another project the center is coordinating is a civic engagement network -- a comprehensive searchable database of public service opportunities for students, faculty, staff and alumni that will be available on its new Web site by the end of September. The database will include everything from classes and volunteer opportunities to internships and postgraduate fellowships to alumni class projects and academic events.

In addition, the center is hoping to encourage educational break trips. "We plan to work with groups to help them to provide an opportunity to learn about important issues by talking and working with practitioners," Jamieson said. "A trip to the Midwest to work on a Habitat for Humanity house would be combined, for instance, with visits to local housing authorities to learn more about the issue of housing and homelessness in that particular region. A week-long civil rights awareness trip would involve visiting the places and people who shaped the movement and learning about the recent developments."

The Pace Center intends to co-sponsor a number of initiatives, some of which include a Scholars in the Schools program with the Graduate School and a pilot externship program and social change career panel with the Office of Career Services.

The Pace Center also has worked with the Office of Communications to produce a brochure, "Engaging at Princeton," that describes learning, service and leadership opportunities in civic engagement. "'Engaging' provides a roadmap for undergraduates who want to access the many resources available to make civic engagement a regular part of their Princeton education," Jamieson said. The brochure is available online.

Jamieson taught at Haverford College and the University of Pennsylvania before joining the Princeton faculty. Her teaching and research interests focus on the intersections of political theory, law and gender. In the politics department, she has created larger courses such as "Discrimination and the Law" and "Law, Politics and Violence," as well as smaller undergraduate seminars on topics of gender, sexuality and law. She is the author of the book, "Real Choices: Feminism, Freedom and the Limits of Law," as well as articles and reviews on subjects such as miscegenation, privacy, identity and hate speech. A graduate of Bryn Mawr College, she earned her Ph.D. from Rutgers University.

The Pace Center was founded in 2001 as the Center for Community Service. It is named for John Pace Jr., a member of Princeton's class of 1939, and his wife Augusta Pace.

The Pace Center staff welcomes new ideas for civic engagement opportunities and new relationships with campus and community constituents. Contact Jamieson or Sheidler at (609) 258-7260 or stop by their office in 246 Frist Campus Center.

Month of Service allows campus to engage with local community