With the aim of expanding internship opportunities for Princeton students, while at the same time broadening outreach to alumni with a commitment to civic engagement, the Pace Center for Civic Engagement and the Princeton University Class of 1969 Community Service Fund launched a partnership over the summer to support Princeton Internships in Civic Service (PICS).

This new partnership is among a growing number that involve alumni forging ties with the University for programs that exemplify Princeton's informal motto, "in the nation's service and in the service of all nations." These include the Princeton University Summer Journalism Program and the Princeton Prize in Race Relations.

"PICS, the Summer Journalism Program and the Princeton Prize exemplify how a volunteer effort can evolve into a sustainable University-supported program while still retaining the benefits of volunteer energies," said Vice President and Secretary Robert Durkee, whose office oversees alumni relations. "All three programs have engaged alumni who had not previously been engaged, and the growth of PICS demonstrates the interest of students in intern positions coupled with alumni mentoring."

Durkee noted the additional example of Princeton Project 55, the alumni program initially organized by the undergraduate class of 1955 that was among the first to marshal significant alumni resources to encourage students to gain experience in the nonprofit sector. Project 55 is in the process of rebranding itself as AlumniCorps in an attempt to extend its volunteer base beyond a single class.

"There are significant advances being made in alumni-affiliated nonprofit opportunities, and there appears to be dramatically increasing interest," Durkee said.

Founded by the Class of 1969's Community Service Fund and supported by Princeton alumni, PICS places students in summer internships in nonprofit organizations. The organizations participating in the program represent a wide range of national and international programs, including legal services, public policy, group advocacy, health and social services, community development, education and outreach through the arts. 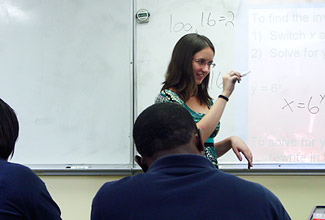 Princeton senior Kaitlyn Golden teaches algebra to high school students at North Star Academy Charter School in Newark, NJ, as part of a summer internship offered through the Princeton Internships in Civic Service (PICS) program. The alumni-initiated program, which recently partnered with the University's Pace Center for Civic Engagement, is among a growing number of service partnerships between alumni and the University. (Photo courtesy of the Pace Center for Civic Engagement)

The Community Service Fund, an independent organization, has used the efforts of alumni volunteers since its inception to create and place students in paid internships in the United States and abroad. The Pace Center and the Community Service Fund now will work closely together to enhance the PICS program, which will become the umbrella program for alumni-sponsored civic engagement summer internships offered through the center. The Pace Center will be the gateway through which students will become part of the PICS program, and all student contact with the program will be through the Pace Center.

The Community Service Fund will continue to be responsible for creating PICS internships, which includes recruiting potential organizations, awarding internships to organizations, overseeing funding of the opportunities, involving alumni in the student interview process, administering an alumni mentor program and communicating with classes and other alumni organizations.

"We are delighted to partner with the Class of 1969 Community Service Fund to support PICS, and expect this collaboration will enable us together to expand the number and quality of opportunities available to Princeton students," said Kiki Jamieson, the Class of 1951 Director of the Pace Center for Civic Engagement. "We already have seen some positive outcomes of such a partnership, reflected in the increased student and alumni interest in public service internships. We want to sustain and increase the momentum, and believe an integrated program of public service internships will serve the students, will welcome participation by more alumni and will support and enhance the University's commitment to service and civic engagement."

Alice Zheng of the class of 2013 is one of 600 Princeton student interns who have been placed in 157 nonprofit organizations as part of the PICS program. Here, she teaches algebra to students at North Star Academy Charter School in Newark, NJ. (Photo courtesy of the Pace Center for Civic Engagement)

The Community Service Fund sponsored its first internships in 1996. The Princeton Project 55 internship program was consolidated with the service fund's program in 2006 to form PICS, which has continued to expand to include other alumni classes, in particular the classes of 1970 and 1977, as well as regional associations and Princeton graduates serving as board members, mentors and sponsors to a growing number of students.

More than 600 interns have been placed with 157 nonprofit organizations since 1996. This past summer, PICS received applications from more than 400 students, with 65placed in internships, compared to 13 in the Community Service Fund's first year.

Chuck Freyer, chair of the Community Service Fund and a member of the class of 1969, said that the partnership with the Pace Center will continue to "build on our 15 years of successfully enlisting alumni from a number of classes and regional associations to help meet the growing demand among Princeton students for summer internships in community service."

Created by alumni volunteers and sponsored by the University, the Princeton Prize in Race Relations was launched in 2003 in the Washington, D.C. and Boston metropolitan areas to recognize high school students who have done outstanding work to advance the cause of race relations. Since its inception, the program has expanded to 24 regions across the country, and some 500 students have been honored for initiatives benefitting their schools or communities.

"Many Princetonians have a fundamental desire to get involved in their communities, and this opportunity to work with other Princetonians on such an important issue has broad appeal," said Henry Von Kohorn, founder and first chair of the Princeton Prize board, and a 1966 graduate of the University. "The Princeton Prize program is an effort to demonstrate to others what Princeton values, and that addressing the issue of race relations is critically important to the future of our country. All alumni involved in the program believe that this is a project truly 'in the nation's service.'"

In a separate effort begun in 2002, former members of the editorial board of The Daily Princetonian independent student newspaper started the summer journalism program, which offers high school seniors from under-resourced financial backgrounds 10 days of journalistic immersion and instruction. The program includes workshops on the First Amendment and hands-on practice reporting stories on subjects such as the research of Princeton faculty members. It also offers participants in-depth assistance into applying to college.

The program is hosted by the Office of the Vice President for Campus Life with internship support from PICS.

"This is a remarkable program, both in terms of providing a significant journalism enrichment experience on Princeton's campus and a strong mentoring program that begins during the program and continues through the participants' college application process and through their college years," said Amy Campbell, director of Campus Life Initiatives in the Office of the Vice President for Campus Life. "The outreach to students from under-resourced communities and inner cities is exceptional, and the track record of support and student success is impressive." 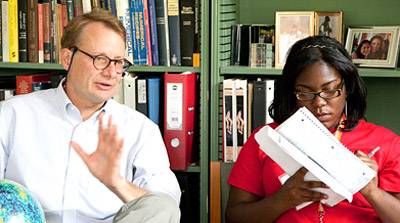 High school student Shawdae Harrison interviews Princeton astrophysicist Lyman Page while on campus with the Princeton Summer Journalism Program, one of many service-oriented programs launched by alumni that have evolved into partnerships with the University. (Photo by Denise Applewhite)

The summer journalism program has grown to attract more than 250 applicants from across the country each year.

Princeton Project 55 also relies on alumni partnerships for its success in placing students in paid year-long fellowships. Now in its 20th year, Project 55 has refined its mission and initiated a new program, Princeton AlumniCorps, intended to involve alumni of all ages and from universities across the country in working in the public interest.

According to Kathleen Reilly, executive director of Princeton AlumniCorps, the program's focus over the next three years will be to engage Princeton alumni of all ages in meaningful experiences in the nonprofit sector. Further, the AlumniCorps board of directors approved a new program in May, Community Volunteers, which will match Princeton alumni from the '60s, '70s and '80s in volunteer positions.

Part of the new program will be piloted in Trenton, where it will form working groups of retirement-age alumni and assign them a pro bono project at a Trenton nonprofit.

In Washington, D.C., the Community Volunteers program will pilot a program to train alumni interested in working on nonprofit boards in how to vet organizations, serve as board members and find board openings in their city.

"The Project 55 fellowships continue to be successful," said Reilly. "Since 1989, AlumniCorps has leveraged approximately $2.3 million of operating funds to secure more than $20 million in fellowship and internship stipends and benefits at nearly 560 organizations. We have placed more than 1,200 Princeton alumni with nonprofit organizations, and we have helped to create and support similar programs at more than 25 other universities."

Inspiring other individuals to commit to service is a hallmark of Project 55, PICS, the Princeton Prize and a host of other efforts conceived by Princeton graduates. Dozens of alumni classes and associations, along with individual Princetonians, have spearheaded a broad array of initiatives that provide opportunities for Princeton students to develop as active citizens and effective public leaders.

"Princeton's commitment to civic engagement is distinctive because of the intergenerational connections among students and alumni," said Jamieson. "Princeton alumni are deeply committed to civic engagement. They have created innovative and influential programs that connect students, alumni and service. These programs range from educational outreach to sustainability and are united by their focus on supporting the engagement in public life of Princeton students and alumni.

"Together, Princeton alumni and students are working energetically and creatively to build stronger communities and societies throughout the world," Jamieson said.

Project_55, in the nation's service